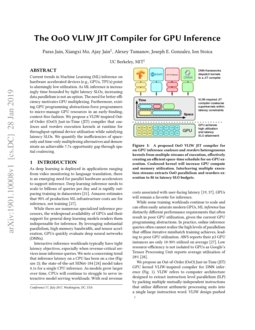 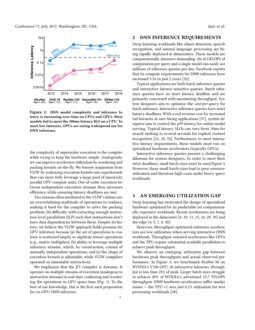 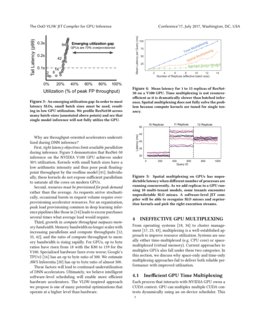 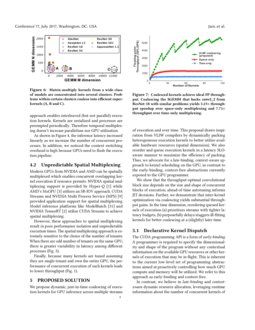 JACC: An OpenACC Runtime Framework with Kernel-Level and Multi-GPU Parallelization

As deep learning is deployed in applications ranging from video monitoring to language translation, there is an emerging need for parallel hardware accelerators to support inference. Deep learning inference needs to scale to billions of queries per day and is rapidly outpacing training in datacenters

. Amazon estimates that 90% of production ML infrastructure costs are for inference, not training

Two reasons often attributed to the VLIW’s failure are: (a) overwhelming multitude of operations to coalesce, making it hard for the compiler to solve the packing problem; (b) difficulty with extracting enough instruction level parallelism such that instructions don’t have data dependencies between them. Despite its history, we believe the VLIW approach holds promise for GPU inference because (a) the set of operations to coalesce is restricted largely to algebraic tensor operations (e.g., matrix multiplies), (b) ability to leverage multiple inference streams, which, by construction, consist of mutually independent operations, and (c) the shape of execution kernels is adjustable, while VLIW compilers operated on immutable instructions.

We emphasize that the JIT compiler is dynamic. It operates on multiple streams of execution (analogous to instruction streams) in real-time, coalescing and reordering the operations in GPU space-time (Figure 1). To the best of our knowledge, this is the first such proposition for on-GPU DNN inference.

Deep learning workloads like object detection, speech recognition, and natural language processing are being rapidly deployed in datacenters. These models are computationally intensive demanding 10s of GFLOPS of computation per query and a single model can easily see millions of inference queries per day. Facebook reports that its compute requirements for DNN inference have increased 3.5x in just 2 years

Interactive inference queries present a challenging dilemma for system designers. In order to meet their strict deadlines, small batch-sizes must be used Figure 3. However, those small batch-sizes lead to poor resource-utilization and therefore high-costs under heavy load.

Why are throughput-oriented accelerators underutilized during DNN inference?

Second, resources must be provisioned for peak demand rather than the average. As requests arrive stochastically, occasional bursts in request volume require over-provisioning accelerator resources. For an organization, peak load provisioning common in deep learning inference pipelines like those in (Crankshaw et al., 2018) leads to excess purchases several times what average load would require.

These factors will lead to continued underutilization of DNN accelerators. Ultimately, we believe intelligent software-level scheduling will enable more efficient hardware accelerators. The VLIW-inspired approach we propose is one of many potential optimizations that operate at a higher level than hardware.

As shown in  Figure 4, the inference latency increased linearly as we increase the number of concurrent processes. In addition, we noticed the context switching overhead is high because GPUs need to flush the execution pipeline.

Finally, because many kernels are tuned assuming they are single-tenant and own the entire GPU, the performance of concurrent execution of such kernels leads to lower throughput (Table 1).

We propose dynamic, just-in-time coalescing of execution kernels for GPU inference across multiple streams of execution and over time. This proposal draws inspiration from VLIW compilers by dynamically packing heterogeneous execution kernels to better utilize available hardware resources (spatial dimension). We also reorder and queue execution kernels in a latency SLO-aware manner to maximize the efficiency of packing. Thus, we advocate for a late-binding, context-aware approach to kernel scheduling on the GPU, in contrast to the early-binding, context-free abstractions currently exposed to the GPU programmer.

We show that the throughput-optimal convolutional block size depends on the size and shape of concurrent blocks of execution; ahead-of-time autotuning informs JIT decisions. Further, we demonstrate that inter-kernel optimization via coalescing yields substantial throughput gains. In the time dimension, reordering queued kernels of execution (a) prioritizes streams with tighter latency budgets, (b) purposefully delays/staggers ill-fitting kernels for better coalescing at a (slightly) later time.

The CUDA programming API is a form of early-binding. A programmer is required to specify the dimensionality and shape of the program without any contextual information on the available GPU resources or other kernels of execution that may be in flight. This is inherent to the current low-level set of programming abstractions aimed at proactively controlling how much GPU compute and memory will be utilized. We refer to this approach as early-binding and context-free.

In contrast, we believe in late-binding and context-aware dynamic resource allocation, leveraging runtime information about the number of concurrent kernels of execution, and device context, such as the typical problem sizes served by a device. Given this information, individual kernels can be (a) retuned for better spatial multiplexing, (b) coalesced for better utilization, and (c) reordered for better spatiotemporal packing, while meeting the latency SLOs of individual streams of execution.

Therefore, instead of specifying how GPU should allocate threads across blocks, the programmer should interact with the GPU at a higher level, via a declarative API by specifying the operators, the inputs, and latency constraints. The JIT compiler will then execute them with contextual knowledge of the current GPU state and other streams of execution, thereby improving utilization while satisfying latency SLOs.

Moreover, we notice that CUDA Stream scheduling anomalies typically only create a few stragglers, so we can simply evict degraded workers without significantly impacting total system throughput. We are further investigating this approach in ongoing work.

A kernel that cannot yet be coalesced with those of other applications can be delayed via reordering. Thus, a dynamic JIT compiler overlaps waiting time from coalescing with computation from other execution streams.

By retuning superkernels ahead-of-time in order to improve co-tenancy, we relieve pressure on the runtime JIT compiler. As GPU programs have many tunable parameters, we rely on auto-tuning. Preliminary results for our VLIW auto-tuner show 1.25x throughput gains in a co-tenancy optimized kernel (Table 1).

At runtime, our VLIW JIT compiler repacks multiple small kernels into a large execution block. The compiler can apply pre-computed parameters from the auto-tuning phase to further optimize these larger kernel configurations. Scheduling a single superkernel on the GPU better utilizes compute and memory as compared to time-slicing. Unlike CISC execution streams, DNN kernels have extremely predictable performance and perform a small class of operations; comparably coarse-grained runtime packing decisions are efficient.

, we show that the matrix multiply kernels from multiple frequently used DNNs can be clustered by their dimensions. Within each cluster, problems can be coalesced with minimal padding overhead resulting in efficient co-execution. Coalescing a ResNet-18 intermediate convolution using the

7.71× throughput increase over time-slicing, and 3.23× over Hyper-Q spatial multiplexing (Fig. 6

With the end of Moore’s Law and Dennard Scaling, performance gains in hardware will come from workload specialization. This implies increased heterogeneity in the types of specialized devices. We envision JIT compilation across multiple streams of execution to extend over multiple devices, such as ASICs, GPUs, TPUs, specialized inference processing units, and FPGAs. This will enable a more dynamic tradeoff of latency and throughput and improve hardware utilization in heterogenous settings. Furthermore, dynamic JIT compilation will also be able to explore different latency-accuracy tradeoffs.