For every n≥ 27, we show that the number of n/(n-1)^+-free words (i.e., threshold words) of length k on n letters grows exponentially in k. This settles all but finitely many cases of a conjecture of Ochem. 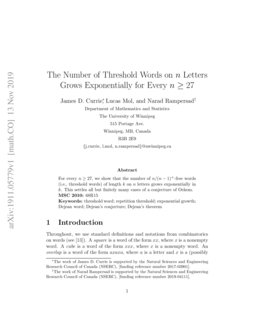 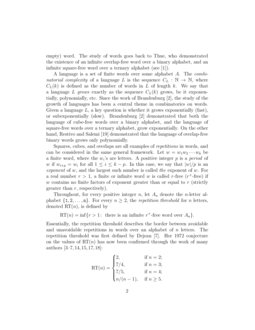 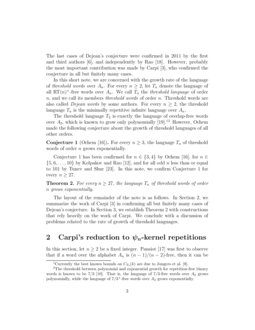 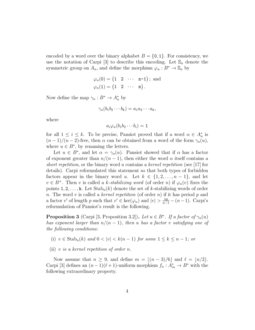 On Periodicity Lemma for Partial Words

We show that the number of length-n words over a k-letter alphabet havin...
Daniel Gabric, et al. ∙

The power of deeper networks for expressing natural functions

It is well-known that neural networks are universal approximators, but t...
David Rolnick, et al. ∙

In this work, we consider the complexity and throughput limits of the Fa...
Saulo Queiroz, et al. ∙

A language is a set of finite words over some alphabet A. The combinatorial complexity of a language L is the sequence CL:N→N, where CL(k) is defined as the number of words in L of length k. We say that a language L grows exactly as the sequence CL(k) grows, be it exponentially, polynomially, etc. Since the work of Brandenburg [2], the study of the growth of languages has been a central theme in combinatorics on words. Given a language L, a key question is whether it grows exponentially (fast), or subexponentially (slow). Brandenburg [2] demonstrated that both the language of cube-free words over a binary alphabet, and the language of square-free words over a ternary alphabet, grow exponentially. On the other hand, Restivo and Salemi [19] demonstrated that the language of overlap-free binary words grows only polynomially.

Squares, cubes, and overlaps are all examples of repetitions in words, and can be considered in the same general framework. Let w=w1w2⋯wk be a finite word, where the wi’s are letters. A positive integer p is a period of w if wi+p=wi for all 1≤i≤k−p. In this case, we say that |w|/p is an exponent of w, and the largest such number is called the exponent of w. For a real number r>1, a finite or infinite word w is called r-free (r+-free) if w contains no finite factors of exponent greater than or equal to r (strictly greater than r, respectively).

Throughout, for every positive integer n, let An denote the n-letter alphabet {1,2,…,n}. For every n≥2, the repetition threshold for n letters, denoted RT(n), is defined by

The last cases of Dejean’s conjecture were confirmed in 2011 by the first and third authors [6], and independently by Rao [18]

. However, probably the most important contribution was made by Carpi

[3], who confirmed the conjecture in all but finitely many cases.

For every n≥3, the language Tn of threshold words of order n grows exponentially.

, and for all odd

For every n≥27, the language Tn of threshold words of order n grows exponentially.

The layout of the remainder of the note is as follows. In Section 2, we summarize the work of Carpi [3] in confirming all but finitely many cases of Dejean’s conjecture. In Section 3, we establish Theorem 2 with constructions that rely heavily on the work of Carpi. We conclude with a discussion of problems related to the rate of growth of threshold languages.

In this section, let n≥2 be a fixed integer. Pansiot [17] was first to observe that if a word over the alphabet An is (n−1)/(n−2)-free, then it can be encoded by a word over the binary alphabet B={0,1}. For consistency, we use the notation of Carpi [3] to describe this encoding. Let Sn denote the symmetric group on An, and define the morphism φn:B∗→Sn by

Now define the map γn:B∗→A∗n by

Let u∈B∗, and let α=γn(u). Pansiot showed that if α has a factor of exponent greater than n/(n−1), then either the word α itself contains a short repetition, or the binary word u contains a kernel repetition (see [17] for details). Carpi reformulated this statement so that both types of forbidden factors appear in the binary word u. Let k∈{1,2,…,n−1}, and let v∈B+. Then v is called a k-stabilizing word (of order n) if φn(v) fixes the points 1,2,…,k. Let Stabn(k) denote the set of k-stabilizing words of order n. The word v is called a kernel repetition (of order n) if it has period p and a factor v′ of length p such that v′∈ker(φn) and |v|>npn−1−(n−1). Carpi’s reformulation of Pansiot’s result is the following.

Let u∈B∗. If a factor of γn(u) has exponent larger than n/(n−1), then u has a factor v satisfying one of the following conditions:

We note that Proposition 4 was proven by Carpi [3] in the case that n≥30 in a computation-free manner. The improvement to n≥27 stated here was achieved later by the first and third authors [4], using lemmas of Carpi [3] along with a significant computer check.

Proposition 4 says that for every word w∈A∗m, no factor of fn(w) satisfies condition (i) of Proposition 3. Thus, we need only worry about factors satisfying condition (ii) of Proposition 3, i.e., kernel repetitions. To this end, define the morphism ψn:A∗m→Sn by ψn(v)=φn(fn(v)) for all v∈A∗m. A word v∈A∗m is called a ψn-kernel repetition if it has a period q and a factor v′ of length q such that v′∈ker(ψn) and (n−1)(|v|+1)≥nq−3. Carpi established the following result.

In other words, if w∈A∗m contains no ψn-kernel repetitions, then no factor of fn(w) satisfies condition (ii) of Proposition 3. Altogether, we have the following theorem, which we state formally for ease of reference.

Finally, we note that the morphism fn is defined in such a way that the kernel of ψn has a very simple structure.

We first recall the definition of α, the infinite word over Am defined by Carpi [3] that contains no ψn-kernel repetitions. First of all, define β=(bi)i≥1, where

Note that if i≡2 (mod 4), then ai=2. Let Zm be the set of all finite words obtained from a prefix of α by exchanging any subset of these 2’s for 1’s. To be precise, if z=z1z2⋯zk, then z∈Zm if and only if all of the following hold:

Now, using Lemma 8 in place of [3, Lemma 9.3], a proof strictly analogous to that of [3, Proposition 9.4] gives the following. The only tool in the proof that we have not covered here is [3, Lemma 9.2], which is a short technical lemma about the repetitions in the word β, and which can be used without any modification.

Suppose that n≥33. Then no word z∈Zm contains a ψn-kernel repetition.

Define a substitution g:A∗4→2A∗4 by

We extend g to 2A∗4 by g(W)=⋃w∈Wg(w), which allows us to iteratively apply g to an initial word in A∗4. Let Z4=Fact{v: v∈gn(1) for some n≥1}, i.e., we have that Z4 is the set of factors of all words obtained by iteratively applying g to the initial word 1. If a word w∈A∗4 has period p and the length p prefix of w is in ker(ψ), then we say that p is a kernel period of w.

Suppose that 27≤n≤32. Then no word in Z4 contains a ψn-kernel repetition.

Since n≤32, we certainly have

for all 1≤i≤r. Dividing through by 3i, and then simplifying, we obtain

Evidently, we have vr−1∈Evr. For every word w∈W, let pw denote the kernel period of w, and let qw denote the maximum length of a repetition with kernel period 3pw across all words in Ew. By exhaustive check, for every w∈W, we find 3pw>31[qw−3pw+2]. However, the word vr−1=xr−1yr−1 must be in Evr, and by (2), we have

This is a contradiction. We conclude that the set Z4 contains no ψn-kernel repetitions. ∎

We now proceed with the proof of our main result.

First suppose that n≥33. By Proposition 9, no word z∈Zm contains a ψn-kernel repetition. From the definition of Zm, one easily proves that

Since n, and hence ℓ, are fixed, the quantity (n−1)(ℓ+1) is a constant, and we conclude that the language Tn grows exponentially.

By the same argument as above, we see that

and we conclude that the language Tn grows exponentially. ∎

Conjecture 1 has now been established for all n∉{12,14,…,26}. We remark that different techniques than those presented here will be needed to establish Conjecture 1 in all but one of these remaining cases. (It appears that the techniques presented here could potentially be used for n=22, but we do not pursue this isolated case.) For example, let n=26. Then we have m=3. By computer search, for every letter a∈Am, the word fn(a3) contains a 15-stabilizing word of length 350, which is less than 15(n−1)=375. By another computer search, the longest word on {1,2} avoiding ψn-kernel repetitions has length 15. So there are only finitely many words in A∗m that avoid both ψn-kernel repetitions and the forbidden stabilizing words. Similar arguments lead to the same conclusion for all n∈{12,14,16,18,20,24}.

For a language L, the value α(L)=limsupk→∞(CL(k))1/k is called the growth rate of L. If L is factorial (i.e., closed under taking factors), then by an application of Fekete’s Lemma, we can safely replace limsup by lim in this definition. If α(L)>1, then the language L grows exponentially, and in this case, α(L) is a good description of how quickly the language grows.

For all n≥33, we have established that α(Tn)≥21/4(n−1)(ℓ+1). However, this lower bound tends to 1 as n tends to infinity, and this seems far from best possible. Indeed, Shur and Gorbunova proposed the following conjecture concerning the asymptotic behaviour of α(Tn).

The sequence {α(Tn)} of the growth rates of threshold languages converges to a limit ^α≈1.242 as n tends to infinity.

A wide variety of evidence supports this conjecture – we refer the reader to [22, 8, 21, 20] for details. For a fixed n, there are efficient methods for determining upper bounds on α(Tn) which appear to be rather sharp, even for relatively large values of n (see [22], for example). Establishing a sharp lower bound on α(Tn) appears to be a more difficult problem. We note that a good lower bound on α(T3) is given by Kolpakov [11] using a method that requires some significant computation. For all n∈{5,6,…,10}, Kolpakov and Rao [12] give lower bounds for α(Tn)

using a similar method. They were then able to estimate the value of

α(Tn) with precision 0.005 using upper bounds obtained by the method of Shur and Gorbunova [22].

Thus, in addition to resolving the finitely many remaining cases of Conjecture 1, improving our lower bound for α(Tn) when n≥27 remains a significant open problem.