The number of small-degree vertices in matchstick graphs

A matchstick graph is a crossing-free unit-distance graph in the plane. Harborth (1981) proposed the problem of determining whether there exists a matchstick graph in which every vertex has degree exactly 5. In 1982, Blokhuis gave a proof of non-existence. A shorter proof was found by Kurz and Pinchasi (2011) using a charging method. We combine their method with the isoperimetric inequality to show that there are Ω(√(n)) vertices in a matchstick graph on n vertices that are of degree at most 4, which is asymptotically tight. 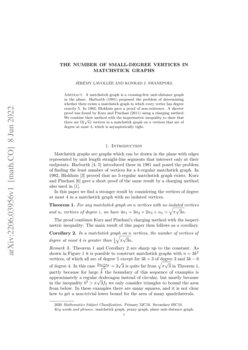 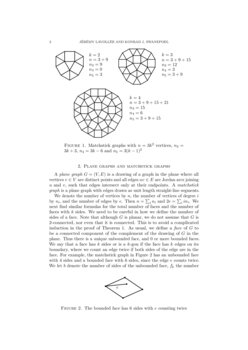 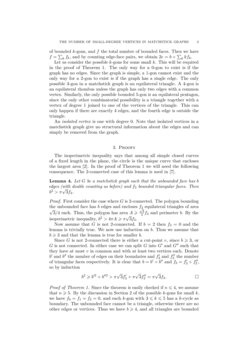 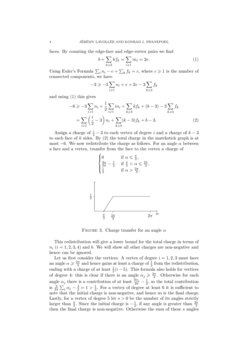 A tight bound for the number of edges of matchstick graphs

Bounded-Degree Spanners in the Presence of Polygonal Obstacles

The k-cap (or k-winners-take-all) process on a graph works as follows: i...
Mirabel Reid, et al. ∙

On flips in planar matchings

In this paper we investigate the structure of a flip graph on non-crossi...
Marcel Milich, et al. ∙

Matchstick graphs are graphs which can be drawn in the plane with edges represented by unit length straight-line segments that intersect only at their endpoints. Harborth [4, 5] introduced these in 1981 and posed the problem of finding the least number of vertices for a k-regular matchstick graph. In 1982, Blokhuis [2] proved that no 5-regular matchstick graph exists. Kurz and Pinchasi [6] gave a short proof of the same result by a discharging method.

In this paper we find a stronger result by considering the vertices of degree at most 4 in a matchstick graph with no isolated vertices.

For any matchstick graph on n vertices with no isolated vertices and ni vertices of degree i, we have 4n1+3n2+2n3+n4>√π√3⋅n.

The proof combines Kurz and Pinchasi’s discharging method with the isoperimetric inequality. The main result of this paper then follows as a corollary.

In a matchstick graph on n vertices, the number of vertices of degree at most 4 is greater than 14√π√3⋅n.

Theorem 1 and Corollary 2 are sharp up to the constant. As shown in Figure 1, it is possible to construct matchstick graphs with n=3k2+3k vertices, of which all are of degree 5 except for six of degree 3 and 6(k−1) of degree 4. The construction consists of a hexagonal piece of the triangular lattice with the central vertex removed, as well as removing every second edge of the boundary of each hexagon except for the smallest and the largest hexagon. In this case, 2n3+n4√n=2√3√1+1k is quite far from √π√3 in Theorem 1, partly because for large k the boundary of this example is a regular hexagon instead of circular, and partly because in the inequality b2>π√3f3, we only consider triangles to bound the area from below. In this example there are many quadrilaterals, and it is not clear how to get a non-trivial lower bound for the area of many quadrilaterals in a matchstick graph.

A plane graph G=(V,E) is a drawing of a graph in the plane where all vertices v∈V are distinct points and all edges uv∈E are Jordan arcs joining u and v, such that edges intersect only at their endpoints. A matchstick graph is a plane graph with edges drawn as unit length straight-line segments.

We denote the number of vertices by n, the number of vertices of degree i by ni, and the number of edges by e. Then n=∑ini and 2e=∑iini. We next find similar formulas for the total number of faces and the number of faces with k sides. We need to be careful in how we define the number of sides of a face. Note that although G is planar, we do not assume that G is 2-connected, nor even that it is connected. This is to avoid a complicated induction in the proof of Theorem 1. As usual, we define a face of G to be a connected component of the complement of the drawing of G in the plane. Thus there is a unique unbounded face, and 0 or more bounded faces. We say that a face has k sides or is a k-gon if the face has k edges on its boundary, where we count an edge twice if both sides of the edge are in the face. For example, the matchstick graph in Figure 2 has an unbounded face with 4 sides and a bounded face with 6 sides, since the edge e counts twice.

An isolated vertex is one with degree 0. Note that isolated vertices in a matchstick graph give no structural information about the edges and can simply be removed from the graph.

The isoperimetric inequality says that among all simple closed curves of a fixed length in the plane, the circle is the unique curve that encloses the largest area [1]. In the proof of Theorem 1 we will need the following consequence. The 2-connected case of this lemma is used in [7].

Let G be a matchstick graph such that the unbounded face has b edges (with double counting as before) and f3 bounded triangular faces. Then b2>π√3f3.

First consider the case where G is 2-connected. The polygon bounding the unbounded face has b edges and encloses f3 equilateral triangles of area √3/4 each. Thus, the polygon has area A⩾√34f3 and perimeter b. By the isoperimetric inequality, b2>4πA⩾π√3f3.

Since G is not 2-connected there is either a cut-point v, since b⩾3, or G is not connected. In either case we can split G into subgraphs G′ and G′′ with at most the vertex v in common and with at least two vertices each. Let b′ and b′′ denote the number of edges on their boundaries and f′3 and f′′3 the number of triangular faces respectively. It is clear that b=b′+b′′ and f3=f′3+f′′3, so by induction

The proof of Theorem 1 below uses the discharging method from [6]. The discharging method is used in graph theory and combinatorial geometry to prove results about planar graphs, geometric graphs and line arrangements [3, 8], going back to the proof of the Four Colour Theorem. As far as we know, the charging rule in [6] is the first one that uses Euclidean geometry, as the redistribution of charges in this rule depends on the sizes of angles. We will use the exact same charging rule. Compared to the proof in [6], our proof is slightly more technical not only because we need to consider vertices of degree other than 5 too, but also because we make a careful consideration of the case when the graph is not 2-regular.

Since the theorem is easily checked if n⩽4, we assume that n⩾5. By the discussion in Section 2 of the possible k-gons for small k, we have f0=f1=f2=0, and each k-gon with 3⩽k⩽5 has a k-cycle as boundary. The unbounded face cannot be a triangle, otherwise there are no other edges or vertices. Thus we have b⩾4, and all triangles are bounded faces. We will use the same discharging method as in [6], which corresponds to the vertex charging version of [3, Proposition 3.1]. First we assign a charge of i−6 to each vertex of degree i and a charge of 2k−6 to each face of k sides. As we show next, the total charge summed over all vertices and faces of the matchstick graph is at most −12. By counting the edge-face and edge-vertex pairs we find

Using Euler’s Formula ∑ini−e+∑kfk=c, where c⩾1 is the number of connected components, we have

and using (1) this gives

We now redistribute the charge as follows. For an angle α between a face and a vertex, transfer from the face to the vertex a charge of

Since this discharging rule was given without motivation in [6], we try to motivate it now. We want the charges of all faces and all vertices of degree at least 5 to end up non-negative. Since triangles start off with a charge of 0, we would like there to be no transfer of charge from a triangle to its vertices. Thus, since all triangles are equilateral, we do not want any transfer of charge in angles of size π/3. Next, consider a hexagonal face. In order for this face to end up with a non-negative charge, we have to move a charge of on average at most 1 to each of its vertices. Thus, we cap the charge transfer at 1, and since the average degree of an angle of a hexagon is 2π/3, we let this maximum charge transfer start at this angle. Third, a vertex of degree 5 needs to get a charge of at least 1. If we let the transferred charge change linearly from π/3 to 2π/3, then, at least in the case where all angles at the vertex of degree 5 lie between π/3 and 2π/3, the vertex receives a total charge of 1, and thus ends up with a charge of 0.

We next show that indeed, in all cases, the charges of all faces and all vertices of degree at least 5 will become non-negative, and we obtain the lower bound (4) for the total charge in terms of ni (i=1,2,3,4) and b.

Let us first consider the vertices. A vertex of degree i=1,2,3 must have an angle α⩾2π3 and hence gains at least a charge of 1 from the redistribution, ending with a charge of at least i−5. This formula also holds for vertices of degree 4: this is clear if there is an angle αj⩾2π3. Otherwise for each angle αj there is a contribution of at least 3αjπ−1, so the total contribution is 3π∑jαj−4=2>1. For a vertex of degree at least 6 it is sufficient to note that the initial charge is non-negative, and hence so is the final charge. Lastly, for a vertex of degree 5 let s>0 be the number of its angles strictly larger than π3. Since the initial charge is −1, if any angle is greater than 2π3 then the final charge is non-negative. Otherwise the sum of these s angles is at least 2π−π3(5−s)=π3(s+1) and hence the final charge is at least −1+3π⋅π3(s+1)−s=0. From these calculations we can bound the total vertex charge after redistribution from below by

If the number of sides k is at least 6, the initial charge is 2k−6 and the face can lose up to the maximum possible of k, since a k-gon has at most k vertices. Hence the final charge is at least k−6⩾0. In particular, the unbounded face with b edges ends up with a charge of at least b−6. We can therefore bound below the total charge of faces after redistribution by b−6. This, together with (3) and (2) gives

Now we can write Euler’s Formula as

Suppose for contradiction that the theorem is false. Then

Combining this with (6) we get the inequality

Finally, substituting this into (5) gives

which finishes the proof once we verify the last inequality. Suppose to the contrary that

Then squaring both sides gives a contradiction

Consider the matchstick graph G and construct its subgraph G′ by removing its isolated vertices, i.e. n′0=0. Applying the previous theorem on G′ we have that

Clearly removing the isolated vertices does not change the number of vertices of each degree i⩾1 hence n′i=ni. We also know that n′=n−n0, so (7) gives

Now adding back the isolated vertices to both sides we obtain

We thank the referees for their careful proof-reading, for providing the example in Remark 3, and for improving the exposition of the proof of Theorem 1.