The NUbots team, from The University of Newcastle, Australia, has had a strong record of success in the RoboCup Standard Platform League since first entering in 2002. The team has also competed within the RoboCup Humanoid Kid-Size League since 2012. The 2014 team brings a renewed focus on software architecture, modularity, and the ability to easily share code. This paper summarizes the history of the NUbots team, describes the roles and research of the team members, gives an overview of the NUbots' robots and software system, and addresses relevant research projects within the the Newcastle Robotics Laboratory. 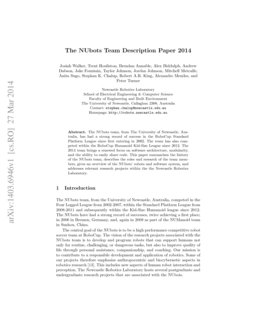 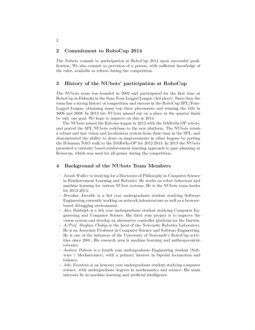 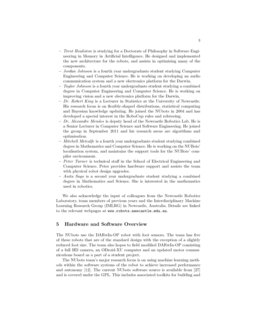 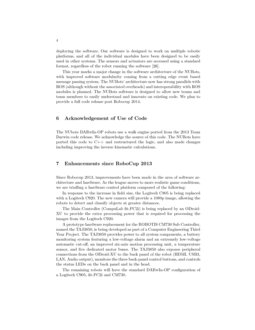 The NUbots team, from the University of Newcastle, Australia, competed in the Four Legged League from 2002-2007, within the Standard Platform League from 2008-2011 and subsequently within the Kid-Size Humanoid league since 2012. The NUbots have had a strong record of successes, twice achieving a first place; in 2006 in Bremen, Germany, and, again in 2008 as part of the NUManoid team in Suzhou, China.

The central goal of the NUbots is to be a high performance competitive robot soccer team at RoboCup. The vision of the research projects associated with the NUbots team is to develop and program robots that can support humans not only for routine, challenging, or dangerous tasks, but also to improve quality of life through personal assistance, companionship, and coaching. Our mission is to contribute to a responsible development and application of robotics. Some of our projects therefore emphasise anthropocentric and biocybernetic aspects in robotics research [13]. This includes new aspects of human robot interaction and perception. The Newcastle Robotics Laboratory hosts several postgraduate and undergraduate research projects that are associated with the NUbots.

The Nubots commit to participation at RoboCup 2014 upon successful qualification. We also commit to provision of a person, with sufficient knowledge of the rules, available as referee during the competition.

3 History of the NUbots’ participation at RoboCup

The NUbots team was founded in 2002 and participated for the first time at RoboCup in Fukuoka in the Sony Four-Legged League (3rd place). Since then the team has a strong history of competition and success in the RoboCup SPL/Four-Legged League, obtaining many top three placements and winning the title in 2006 and 2008. In 2013 the NUbots missed out on a place in the quarter finals by only one goal. We hope to improve on this in 2014.

The NUbots joined the Kid-size league in 2012 with the DARwIn-OP robots, and ported the SPL NUbots codebase to the new platform. The NUbots retain a robust and fast vision and localisation system from their time in the SPL, and demonstrated the ability to draw on improvements in other leagues by porting the B-human NAO walk to the DARwIn-OP for 2012-2013. In 2013 the NUbots presented a curiosity based reinforcement learning approach to gaze planning at Robocup, which was used for all games during the competition.

4 Background of the NUbots Team Members

We also acknowledge the input of colleagues from the Newcastle Robotics Laboratory, team members of previous years and the Interdisciplinary Machine Learning Research Group (IMLRG) in Newcastle, Australia. Details are linked to the relevant webpages at www.robots.newcastle.edu.au.

The NUbots use the DARwIn-OP robot with foot sensors. The team has five of these robots that are of the standard design with the exception of a slightly reduced foot size. The team also hopes to field modified DARwIn-OP consisting of a full HD camera, an ODroid-XU computer and an updated motor communications board as a part of a student project.

The NUbots team’s major research focus is on using machine learning methods within the software systems of the robot to achieve increased performance and autonomy [12]. The current NUbots software source is available from [27] and is covered under the GPL. This includes associated toolkits for building and deploying the software. Our software is designed to work on multiple robotic platforms, and all of the individual modules have been designed to be easily used in other systems. The sensors and actuators are accessed using a standard format, regardless of the robot running the software [26].

This year marks a major change in the software architecture of the NUBots, with improved software modularity coming from a cutting edge event based message passing system. The NUBots’ architecture now has strong parallels with ROS (although without the associated overheads) and interoperability with ROS modules is planned. The NUBots software is designed to allow new teams and team members to easily understand and innovate on existing code. We plan to provide a full code release post Robocup 2014.

6 Acknowledgement of Use of Code

The NUbots DARwIn-OP robots use a walk engine ported from the 2013 Team Darwin code release. We acknowledge the source of this code. The NUBots have ported this code to C++ and restructured the logic, and also made changes including improving the inverse kinematic calculations.

Since Robocup 2013, improvements have been made in the area of software architecture and hardware. As the league moves to more realistic game conditions, we are trialling a hardware control platform composed of the following:

In response to the increase in field size, the Logitech C905 is being replaced with a Logitech C920. The new camera will provide a 1080p image, allowing the robots to detect and classify objects at greater distances.

The Main Controller (CompuLab fit-PC2i) is being replaced by an ODroid-XU to provide the extra processing power that is required for processing the images from the Logitech C920.

A prototype hardware replacement for the ROBOTIS CM730 Sub Controller, named the TAJ3850, is being developed as part of a Computer Engineering Third Year Project. The TAJ3850 provides power to all system components, a battery monitoring system featuring a low-voltage alarm and an extremely low-voltage automatic cut-off, an improved six-axis motion processing unit, a temperature sensor, and five dedicated motor buses. The TAJ3850 also exposes peripheral connections from the ODroid-XU to the back panel of the robot (HDMI, USB3, LAN, Audio output), monitors the three back-panel control buttons, and controls the status LEDs on the back panel and in the head.

The remaining robots will have the standard DARwIn-OP configuration of a Logitech C905, fit-PC2i and CM730.

Research on the topic of localisation focused on Bayesian approaches to robot localisation including Kalman Filter and particle filter based methods. We are interested in modifications of the Kalman Filter to handle non-ideal information from vision, incorporate increased information from multiple agents, and effectively utilise non-unique objects.

Development of the Robot Bear: In a collaborative effort with the company Tribotix and colleagues in design a bear-like robot (called Hykim) was developed [9]. The idea was to have a modular open platform using high quality Dynamixel servos.

Biped Robot Locomotion: The improvement of walking speed and stability has been investigated by the NUbots for several years and on different platforms: On the AIBO robot we achieved one of the fastest walks at that time by walk parameter evolution [29, 12]. On the Nao robot we improved existing walk engines by modifying the joint stiffnesses, or controller gains, [23, 24, 22]

. The stiffnesses were selected through an iterative process to maximise the cost of transport. We investigated the application of Support Vector Machines and Neural Networks to proprioception data for sensing perturbations during pseudo quiet stance. Walk improvements have been primarily done via optimisation techniques

[25], with recent improvements to our framework for online optimisation of bipedal humanoid locomotion. The use of spiking neural networks has been trialled in simulation [31]. Prior to RoboCup 2012 the walk engine developed by the leading SPL team BHuman [16] was ported to the DARwIn-OP platform, and a variety of optimisation techniques were developed and successfully applied to improve walking speed and stability of the DARwIn-OP‘[8]. Similar optimisations are in process for the Team Darwin 2013 walk.

Reinforcement Learning, Affective Computing and Robot Emotions: We investigate the feasibility of reinforcement learning or neurodynamic programming for applications such as motor control and music composition. Concepts for affective computing are developed in multidisciplinary projects in collaboration with the areas of architecture and cognitive science. The concept of emotion is important for selective memory formation and action weighting and continues to gain importance in the robotics community, including within robotic soccer. A number of projects in the Newcastle Robots Laboratory already address this topic [11, 19, 20, 34].

Gaze analysis and head movement behavioural learning: We investigated methods for human and robot pedestrian gaze analysis in [21, 33] as well as space perception, way finding and the detection and analysis of salient regions [3, 2, 4]. Recently we applied motivated reinforcement learning techniques to optimising head movement behaviour, providing a robust algorithm by which a robot learns to choose landmarks to localise efficiently during a soccer game [15]. This algorithm was used in competition at Robocup 2013.

Manifold Learning: In several projects we investigate the application of non-linear dimensionality reduction methods in order to achieve more understanding of, and more precise and efficient processing of, high-dimensional visual and acoustic data. [10, 32, 33].

Other new projects: Much work has been focused on the underlying software architecture and external utilities to enable flexibility and extensibility for future research. Projects undertaken include improving the configurability of the software system via real-time configuration updates, development of a web-based online visualisation and debugging utility [1] and the application of software architectural principles to create a multithreaded event-based system with almost no run-time overhead. Some of this work is currently still in progress as part of the 2013/2014 robotics lab summer projects by new undergraduate students who have joined the team.

Links to publications can be found at the NUbots’ webpage