The Noise Collector for sparse recovery in high dimensions

The ability to detect sparse signals from noisy high-dimensional data is a top priority in modern science and engineering. A sparse solution of the linear system A ρ = b_0 can be found efficiently with an l_1-norm minimization approach if the data is noiseless. Detection of the signal's support from data corrupted by noise is still a challenging problem, especially if the level of noise must be estimated. We propose a new efficient approach that does not require any parameter estimation. We introduce the Noise Collector (NC) matrix C and solve an augmented system A ρ + C η = b_0 + e, where e is the noise. We show that the l_1-norm minimal solution of the augmented system has zero false discovery rate for any level of noise and with probability that tends to one as the dimension of b_0 increases to infinity. We also obtain exact support recovery if the noise is not too large, and develop a Fast Noise Collector Algorithm which makes the computational cost of solving the augmented system comparable to that of the original one. Finally, we demonstrate the effectiveness of the method in applications to passive array imaging. 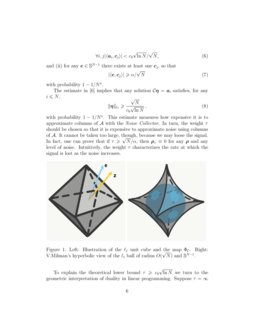 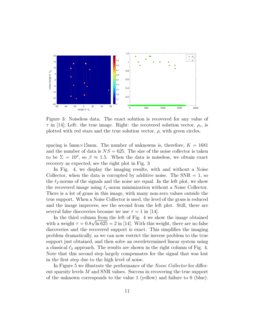 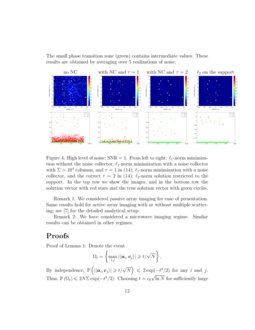 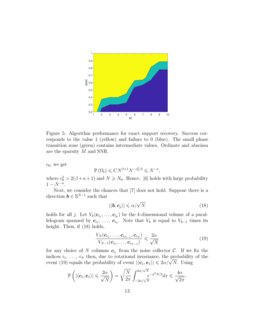 We consider the problem of imaging sparse scenes from a few noisy data u...
Miguel Moscoso, et al. ∙

Model selection with lasso-zero: adding straw to the haystack to better find needles

In many applications one may acquire a composition of several signals th...
Ashley Prater, et al. ∙

The construction of the Noise Collector matrix C starts with the following three key properties. Firstly, its columns should be sufficiently orthogonal to the columns of A, so it does not absorb signals with ”meaningful” information. Secondly, the columns of C should be uniformly distributed on the unit sphere SN−1 so that we could approximate well a typical noise vector. Thirdly, the number of columns in C should grow slower than exponential with N, otherwise the method is impractical. One way to guarantee all three properties is to impose

with α>1, and fill out C drawing \boldmath{c}i at random with rejections until the rejection rate becomes too high. Then, by construction, the columns of C are almost orthogonal to the columns of A, and when the rejection rate becomes too high this implies that we can not pack more N-dimensional unit vectors into C and, thus, we can approximate well a typical noise vector. Finally, the Kabatjanskii-Levenstein inequality (see discussion in [25]) implies that the number Σ of columns in C grows at most polynomially: Σ⩽Nα2.

It is, however, more convenient for the proofs to use a probabilistic version of [5]. Suppose that the columns of C are drawn at random independently. Then, the dot product of any two random unit vectors is still typically of order 1/√N, see e.g. [30]. If the number of columns grows polynomially, we only have to sacrifice an asymptotically negligible event where our Noise Collector does not satisfy the three key properties, and the decoherence constraints in [5] are weakened by a logarithmic factor. The next Lemma is proved in Section Proofs.

and (ii) for any \boldmath{e}∈SN−1 there exists at least one \boldmath{c}j, so that

The estimate in [6] implies that any solution C\boldmath{η}=\boldmath{a}i satisfies, for any i⩽N,

with probability 1−1/Nκ. This estimate measures how expensive it is to approximate columns of A with the Noise Collector. In turn, the weight τ should be chosen so that it is expensive to approximate noise using columns of A. It cannot be taken too large, though, because we may loose the signal. In fact, one can prove that if τ⩾√N/α, then \boldmath{ρ}τ≡0 for any ρ and any level of noise. Intuitively, the weight τ characterizes the rate at which the signal is lost as the noise increases.

we turn to the geometric interpretation of duality in linear programming. Suppose

where \boldmath{e}∈RN is the noise vector in [4], and z is the dual certificate of optimality of (\boldmath{0},\boldmath{η}) for τ=∞. For example, if C

is the identity matrix, then

By construction, the columns of the combined matrix [A|C] are incoherent. This is the key observation, that allows us to prove Theorems 2 and 3 using standard techniques, see e.g. [20]. In particular, we automatically have exact recovery by the standard arguments [11] applied to [A|C] if the data is noiseless.

Lemma 2 (Exact Recovery): Suppose ρ is an M-sparse solution of A\boldmath{ρ}=\boldmath{b}, and there is no noise, \boldmath{e}=0. In addition, assume that the columns of A are incoherent: |⟨\boldmath{a}i,\boldmath{a}j⟩|⩽13M. Then, the solution to [4] satisfies \boldmathρτ=\boldmathρ for all

To find the minimizer [4], we consider a variational approach. We define the function

for a weight τ=c0√lnN, and determine the solution as

The key observation is that this variational principle finds the minimum in [4] exactly for all values of the regularization parameter λ. Hence, the proposed method is fully automated, meaning that it has no tuning parameters. To determine the exact extremum in [13], we use the iterative soft thresholding algorithm GeLMA [21] that works as follows .

For β=1.5 we use τ=0.8√lnN in our numerical experiments. For optimal results, one can calibrate c0 to be the smallest constant such that Theorem 1 holds, that is, we see no phantom signals when the algorithm is fed with pure noise.

We consider passive array imaging of point sources. The problem consists in determining the positions →\boldmath{z}j and the complex666We chose to work with real numbers in the previous sections for ease of presentation but the results also hold with complex numbers. amplitudes αj, j=1,…,M, of a few point sources from measurements of polychromatic signals on an array of receivers; see Figure 2. The imaging system is characterized by the array aperture a, the distance L to the sources, the bandwidth B and the central wavelength λ0.

The data for the imaging problem are the signals

Next, we illustrate the performance of the Noise Collector in this imaging setup. The most important features are that (i) no calibration is necessary with respect to the level of noise, (ii) exact support recovery for relatively large levels of noise (i.e., ∥\boldmath{e}∥l2/∥\boldmath{b}0∥l2⩽c2/√lnN), and (iii) zero false discovery rate for all levels of noise, with high probability.

We consider a high frequency microwave imaging regime with central frequency f0=60GHz corresponding to λ0=5mm. We make measurements for S=25 equally spaced frequencies spanning a bandwidth B=20GHz. The array has N=25 receivers and an aperture a=50cm. The distance from the array to the center of the imaging window is L=50cm. Then, the resolution is λ0L/a=5mm in the cross-range (direction parallel to the array) and c0/B=15mm in range (direction of propagation). These parameters are typical in microwave scanning technology [18].

We seek to image a source vector with sparsity M=12; see the left plot in Fig. 3. The size of the imaging window is 20cm×60cm and the pixel spacing is 5mm×15mm. The number of unknowns is, therefore, K=1681 and the number of data is NS=625. The size of the noise collector is taken to be Σ=104, so β≈1.5. When the data is noiseless, we obtain exact recovery as expected; see the right plot in Fig. 3

In Fig. 4, we display the imaging results, with and without a Noise Collector, when the data is corrupted by additive noise. The SNR =1, so the ℓ2-norms of the signals and the noise are equal. In the left plot, we show the recovered image using ℓ1-norm minimization without a Noise Collector. There is a lot of grass in this image, with many non-zero values outside the true support. When a Noise Collector is used, the level of the grass is reduced and the image improves; see the second from the left plot. Still, there are several false discoveries because we use τ=1 in [14].

In the third column from the left of Fig. 4 we show the image obtained with a weight τ=0.8√ln625=2 in [14]. With this weight, there are no false discoveries and the recovered support is exact. This simplifies the imaging problem dramatically, as we can now restrict the inverse problem to the true support just obtained, and then solve an overdetermined linear system using a classical ℓ2 approach. The results are shown in the right column of Fig. 4. Note that this second step largely compensates for the signal that was lost in the first step due to the high level of noise.

In Figure 5 we illustrate the performance of the Noise Collector for different sparsity levels M and SNR values. Success in recovering the true support of the unknown corresponds to the value 1 (yellow) and failure to 0

(blue). The small phase transition zone (green) contains intermediate values. These results are obtained by averaging over 5 realizations of noise.

Remark 1: We considered passive array imaging for ease of presentation. Same results hold for active array imaging with or without multiple scattering; see [7] for the detailed analytical setup.

Remark 2: We have considered a microwave imaging regime. Similar results can be obtained in other regimes.

Proof of Lemma 1: Denote the event

Next, we consider the chances that [7] does not hold. Suppose there is a direction \boldmath{b}∈SN−1 such that

and that we can find Nβ−1 sets of distinct indices i1, …, iN, we conclude that

Proof of Theorem 1: In order to check (10), we assume that both \boldmath{c}i and −\boldmath{c}i are in C, because it is more geometrically intuitive to work with the convex hull

It implies we may also assume η in (4) has non-negative coefficients, and ∥\boldmath{η}∥l1=minλ>0{\boldmath{e}∈λH}. Thus, ∥\boldmath{η}∥l1 is a norm of e with respect to C, and we can set ∥\boldmath{e}∥C:=∥\boldmath{η}∥l1. This norm is called atomic in [8]. Suppose Λ is the support of η. Its typical size |Λ|=N. Then, the simplex

has the unique normal vector n, which is collinear to our dual certificate z, because

The estimate (7) implies that the convex hull H contains an l2-ball of radius α/√N. Therefore, ∥\boldmath{z}∥l2⩽√N/α with large probability.

By construction, the distribution of ΦC(\boldmath{e}) is rotationally invariant with respect to the probability measure induced by all \boldmath{c}i and e. Thus \boldmath{n}=\boldmath{z}/∥\boldmath{z}∥l2 is also uniformly distributed on \boldmath{S}N−1, and

Proof of Theorem 3: It suffices to prove the result for 1-sparse ρ, say, \boldmath{ρ}=(1,0,…,0). We will demonstrate that the solution to the minimization problem