The Nearest Neighbor Information Estimator is Adaptively Near Minimax Rate-Optimal

We analyze the Kozachenko--Leonenko (KL) nearest neighbor estimator for the differential entropy. We obtain the first uniform upper bound on its performance over Hölder balls on a torus without assuming any conditions on how close the density could be from zero. Accompanying a new minimax lower bound over the Hölder ball, we show that the KL estimator is achieving the minimax rates up to logarithmic factors without cognizance of the smoothness parameter s of the Hölder ball for s∈ (0,2] and arbitrary dimension d, rendering it the first estimator that provably satisfies this property. 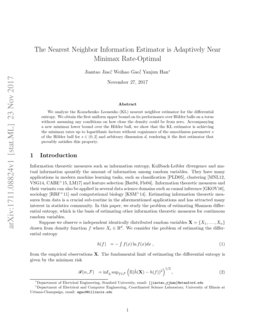 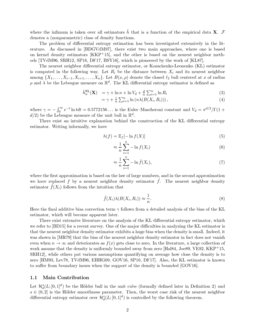 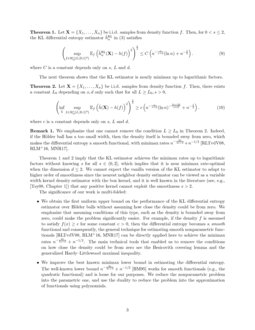 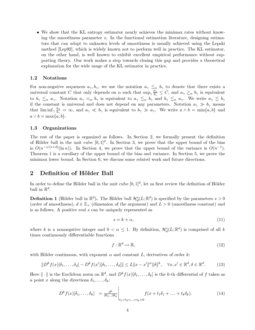 On Testing for Parameters in Ising Models

On the consistency of the Kozachenko-Leonenko entropy estimate

We revisit the problem of the estimation of the differential entropy H(f...
Luc Devroye, et al. ∙

Information theoretic measures such as entropy, Kullback-Leibler divergence and mutual information quantify the amount of information among random variables. They have many applications in modern machine learning tasks, such as classification

. Information theoretic measures and their variants can also be applied in several data science domains such as causal inference

X={X1,…,Xn} drawn from density function f where Xi∈Rd. We consider the problem of estimating the differential entropy

from the empirical observations X. The fundamental limit of estimating the differential entropy is given by the minimax risk

where the infimum is taken over all estimators ^h that is a function of the empirical data X. Here F denotes a (nonparametric) class of density functions.

The problem of differential entropy estimation has been investigated extensively in the literature. As discussed in [2]

, there exist two main approaches, where one is based on kernel density estimators

[24, 5, 12, 16, 6, 32, 37, 47, 8, 9, 54] and the references therein. For non-smooth functionals such as entropy, there is some recent progress [38, 26, 27] on designing theoretically minimax optimal estimators, while these estimators typically require the knowledge of the smoothness parameters, and the practical performances of these estimators are not yet known.

The k-nearest neighbor differential entropy estimator, or Kozachenko-Leonenko (KL) estimator is computed in the following way. Let Ri,k be the distance between Xi and its k-nearest neighbor among {X1,…,Xi−1,Xi+1,…,Xn}. Precisely, Ri,k equals the k-th smallest number in the list {∥Xi−Xj∥:j≠i,j∈[n]}, here [n]={1,2,…,n}. Let B(x,ρ) denote the closed ℓ2 ball centered at x of radius ρ and λ be the Lebesgue measure on Rd. The KL differential entropy estimator is defined as

There exists an intuitive explanation behind the construction of the KL differential entropy estimator. Writing informally, we have

Here the final additive bias correction term lnk−ψ(k) follows from a detailed analysis of the bias of the KL estimator, which will become apparent later.

We focus on the regime where k is a fixed: in other words, it does not grow as the number of samples n increases. The fixed k version of the KL estimator is widely applied in practice and enjoys smaller computational complexity, see [52].

There exists extensive literature on the analysis of the KL differential entropy estimator, which we refer to [4] for a recent survey. One of the major difficulties in analyzing the KL estimator is that the nearest neighbor density estimator exhibits a huge bias when the density is small. Indeed, it was shown in [42] that the bias of the nearest neighbor density estimator in fact does not vanish even when n→∞ and deteriorates as f(x) gets close to zero. In the literature, a large collection of work assume that the density is uniformly bounded away from zero [23, 29, 57, 30, 53], while others put various assumptions quantifying on average how close the density is to zero [25, 40, 56, 14, 20, 52, 11]. In this paper, we focus on removing assumptions on how close the density is to zero.

Let Hsd(L;[0,1]d) be the Hölder ball in the unit cube (torus) (formally defined later in Definition 2 in Appendix A) and s∈(0,2] is the Hölder smoothness parameter. Then, the worst case risk of the fixed k-nearest neighbor differential entropy estimator over Hsd(L;[0,1]d) is controlled by the following theorem.

where C is a constant depends only on s,L,k and d.

The KL estimator is in fact nearly minimax up to logarithmic factors, as shown in the following result from [26].

where c is a constant depends only on s, L and d.

We emphasize that one cannot remove the condition L≥L0 in Theorem 2. Indeed, if the Hölder ball has a too small width, then the density itself is bounded away from zero, which makes the differential entropy a smooth functional, with minimax rates n−4s4s+d+n−1/2 [51, 50, 43].

Theorem 1 and 2 imply that for any fixed k, the KL estimator achieves the minimax rates up to logarithmic factors without knowing s for all s∈(0,2], which implies that it is near minimax rate-optimal (within logarithmic factors) when the dimension d≤2. We cannot expect the vanilla version of the KL estimator to adapt to higher order of smoothness since the nearest neighbor density estimator can be viewed as a variable width kernel density estimator with the box kernel, and it is well known in the literature (see, e.g.,  [55, Chapter 1]) that any positive kernel cannot exploit the smoothness s>2. We refer to [26] for a more detailed discussion on this difficulty and potential solutions. The Jackknife idea, such as the one presented in [11, 3] might be useful for adapting to s>2.

The significance of our work is multi-folded:

The rest of the paper is organized as follows. Section 2 is dedicated to the proof of Theorem 1. We discuss some future directions in Section 3.

In this section, we will prove that

; (ii) the upper bound of the variance is

Os,L,d,k(n−1). Below we show the bias proof and relegate the variance proof to Appendix B.

First, we introduce the following notation

is the probability measure specified by density function

We relegate the proof of Lemma 1 and Lemma 2 to Appendix C. Now we investigate the bias of ^hn,k(X). The following argument reduces the bias analysis of ^hn,k(X) to a function analytic problem. For notation simplicity, we introduce a new random variable X∼f independent of {X1,…,Xn} and study ^hn+1,k({X1,…,Xn,X}). For every x∈Rd, denote Rk(x) by the k-nearest neighbor distance from x to {X1,X2,…,Xn} under distance d(x,y)=minm∈Zd∥m+x−y∥, i.e., the k-nearest neighbor distance on the torus. Then,

Here the expectation is taken with respect to the randomness in Rk(x)=min1≤i≤n,m∈Zd∥m+Xi−x∥,x∈Rd. Define function g(x;f,n) as

By splitting the term into two parts, we have

Now we introduce the following lemma, which is proved in Appendix C.

Let μ1,μ2 be two Borel measures that are finite on the bounded Borel sets of Rd. Then, for all t>0 and any Borel set A⊂Rd,

Applying the second part of Lemma 3 with μ2 being the Lebesgue measure and μ1 being the measure specified by f(x) on the torus, we can view the function M(x) as