It is known that 2-state binary and 3-state unary probabilistic finite automata and 2-state unary quantum finite automata recognize uncountably many languages with cutpoints. These results have been obtained by associating each recognized language with a cutpoint and then by using the fact that there are uncountably many cutpoints. In this note, we prove the same results for fixed cutpoints. Thus, each recognized language is associate with an automaton (i.e., algorithm), and the proofs use the fact that there are uncountably many automata. For each case, we present a new construction. 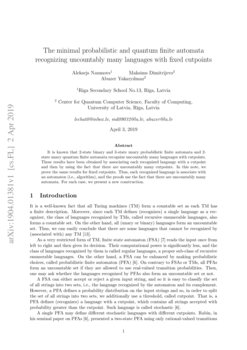 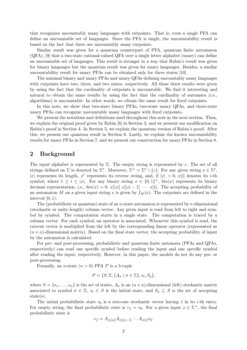 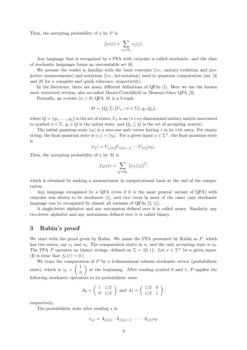 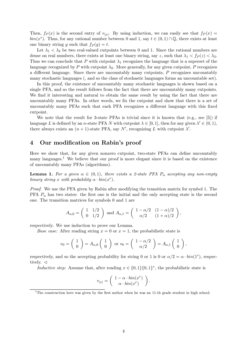 Fuzzy automata have long been accepted as a generalization of nondetermi...
Yongzhi Cao, et al. ∙

In this paper, we investigate the computational and verification power o...
Maksims Dimitrijevs, et al. ∙

On the Power of Quantum Queue Automata in Real-time

The erasure of each bit of information by a computing device has an intr...
Öykü Yılmaz, et al. ∙

In this note we study automata recognizing birecurrent sets. A set of wo...
Andrew Ryzhikov, et al. ∙

We present a correspondence and bisimulation between variants of paramet...
Joseph Gil, et al. ∙

It is a well-known fact that all Turing machines (TM) form a countable set as each TM has a finite description. Moreover, since each TM defines (recognizes) a single language as a recognizer, the class of languages recognized by TMs, called recursive enumerable languages, also forms a countable set. On the other hand, all (unary or binary) languages form an uncountable set. Thus, we can easily conclude that there are some languages that cannot be recognized by (associated with) any TM

As a very restricted form of TM, finite state automaton (FSA) [7] reads the input once from left to right and then gives its decision. Their computational power is significantly less, and the class of languages recognized by them is called regular languages, a proper sub-class of recursive enumerable languages. On the other hand, a FSA can be enhanced by making probabilistic choices, called probabilistic finite automaton (PFA) [6]

A FSA can either accept or reject a given input string, and so it is easy to classify the set of all strings into two sets, i.e., the language recognized by the automaton and its complement. However, a PFA defines a probability distribution on the input strings and so, in order to split the set of all strings into two sets, we additionally use a threshold, called cutpoint. That is, a PFA defines (recognizes) a language with a cutpoint, which contains all strings accepted with probability greater than the cutpoint. Such language is called stochastic

In this note, we show that two-state binary PFAs, two-state unary QFAs, and three-state unary PFAs can recognize uncountably many languages with fixed cutpoints.

The input alphabet is represented by Σ. The empty string is represented by ε. The set of all strings defined on Σ is denoted by Σ∗. Moreover, Σ+=Σ∗∖{ε}. For any given string x∈Σ∗, |x| represents its length, xr represents its reverse string, and, if |x|>0, x[i] denotes its i-th symbol, where 1≤i≤|x|. For any binary string x∈{0,1}+, bin(x) represents its binary decimal representation, i.e., bin(x)=0. x[|x|] x[|x|−1] ⋯ x[1]. The accepting probability of an automaton M on a given input string x is given by fM(x). The cutpoints are defined in the interval [0,1).

-dimensional (stochastic or unity-length) column vector. Any given input is read from left to right and symbol by symbol. The computation starts in a single state. The computation is traced by a column vector. For each symbol, an operator is associated. Whenever this symbol is read, the current vector is multiplied from the left by the corresponding linear operator (represented as

(n×n)-dimensional matrix). Based on the final state vector, the accepting probability of input by the automaton is calculated.

Then, the accepting probability of x by P is

Any language that is recognized by a PFA with cutpoint is called stochastic, and the class of stochastic languages forms an uncountable set [6].

We assume the reader is familiar with the basic concepts (i.e., unitary evolution and projective measurements) and notations (i.e., ket-notation) used in quantum computation (see [4] and [8] for a complete and quick reference, respectively).

In the literature, there are many different definitions of QFAs [1]. Here we use the known most restricted version, also so-called Moore-Crutchfield or Measure-Once QFA [3].

Then, the accepting probability of x by M is

which is obtained by making a measurement in computational basis at the end of the computation.

We start with the proof given by Rabin. We name the PFA presented by Rabin as P, which has two states, say s1 and s2. The computation starts in s1 and the only accepting state is s2. The PFA P operates on binary strings, defined on Σ={0,1}. Let x∈Σ+ be a given input. (It is clear that fP(ε)=0.)

The probabilistic state after reading x is

Then, fP(x) is the second entry of v|x|. By using induction, we can easily see that fP(x)=bin(xr). Thus, for any rational number between 0 and 1, say t∈(0,1)∩Q, there exists at least one binary string y such that fP(y)=t.

Let λ1<λ2 be two real-valued cutpoints between 0 and 1. Since the rational numbers are dense on real numbers, there exists at least one binary string, say z, such that λ1<fP(z)<λ2. Thus we can conclude that P with cutpoint λ1 recognizes the language that is a superset of the language recognized by P with cutpoint λ2. More generally, for any given cutpoint, P recognizes a different language. Since there are uncountably many cutpoints, P recognizes uncountably many stochastic languages (, and so the class of stochastic languages forms an uncountable set).

4 Our modification on Rabin’s proof

Here we show that, for any given nonzero cutpoint, two-state PFAs can define uncountably many languages.111The construction here was given by the first author when he was an 11-th grade student in high school. We believe that our proof is more elegant since it is based on the existence of uncountably many PFAs (algorithms).

For a given α∈(0,1), there exists a 2-state PFA Pα accepting any non-empty binary string x with probability α⋅bin(xr).

respectively. We use induction to prove our Lemma.

Base case: After reading string x=0 or x=1, the probabilistic state is

respectively, and so the accepting probability for string 0 or 1 is 0 or α/2=α⋅bin(1r), respectively. ⊲

Inductive step: Assume that, after reading x∈{0,1}{0,1}∗, the probabilistic state is

Then, after reading x0, the new probabilistic state is

and hence the accepting probability is α⋅bin((x0)r). Similarly, after reading x1, the new probabilistic state is

and hence the accepting probability is α⋅bin((x1)r), where ¯¯¯1 is the value making the column summation to 1. ⊲

For any given cutpoint λ∈(0,1), 2-state PFAs recognize uncountably many stochastic languages with cutpoint λ.

Let 0<α1<α2<1 be two real numbers. Then, there exists a string z such that α1<fP(z)<α2, where P is the PFA given by Rabin. Then, we can easily follow these two inequalities

Due to Lemma 1, we can conclude that

2-state PFAs can recognize uncountably many stochastic languages with cutpoint 1/2.

Since α is irrational, {|vj⟩∣j>0}, the set of all quantum states that Mα can be in, is dense on the unit circle. Similarly, {cos2(j⋅α⋅2π)∣j≥0}, the accepting probabilities of all inputs by Mα, is dense on (0,1). Therefore, for any given two cutpoints λ1<λ2, there is always an input 0j such that

Therefore, the automaton Mα recognizes a different language for each cutpoint in (0,1). In other words, the class of languages recognized by Mα with cutpoints forms an uncountable set.

6 Our result for unary QFAs

We use the same automata family {Mα} given in the previous section by restricting irrational parameter α∈(0,1/4).

Let α and β be two different irrational numbers in (0,1/4). Then, their digit by digit binary representations are as follows:

Since α and β are different, then there exists a minimal j>2 such that αj≠βj.

Suppose that αj=1 and βj=0. We use the input of length 2j−3, say xj. After reading xj, Mα and Mβ rotate by angles

The angles θ1 and θ2 are congruent to

The quantum states of Mα and Mβ lie in the same quadrant after reading the input xj. Here the values of αj−2 and αj−1 determine the number of a quadrant. But, in any case, we can have either

The case in which αj=0 and βj=1 is symmetric. By using the same arguments, we obtain the above table after interchanging the last two headers (fMα(xj) and fMβ(xj)). Therefore, we can conclude the following result.

For any given two irrational numbers α and β in (0,1/4), the QFAs Mα and Mβ recognize different languages with cutpoint 12.

The class of languages recognized by 2-state unary real-valued QFAs with cutpoint 12 forms an uncountable set.

Rabin’s proof was given for binary 2-state PFAs. Unary 2-state PFAs can recognize only a few regular languages with cutpoints [5, 10]. Besides, any unary n-state PFA can recognize at most n nonregular languages with cutpoints [5]. Therefore, there is no direct counterpart of Rabin’s result for unary PFAs. However, we can still show that unary PFAs can define uncountably many stochastic languages. The proof was given first for a family of 4-state unary PFAs [9], and then for a family of 3-state unary PFAs [10].

The former result was already given for a fixed cutpoint (14) (by combining the quantum result given in Section 5 and Turakainen conversion technique [11, 12].) The latter result was given for the pairs of PFAs and cutpoints, i.e., {(Qx,λx)∣x∈(0,1/2]}, and so the proof is still based on the cardinality of cutpoints.

In this section, we give the details of the latter result, and then, in the next section, we present our construction for the fixed cutpoint.

For each x∈(0,1/2], Qx is a 3-state unary PFA over the alphabet {0}. The first state is the starting state and the last state is the only accepting state. The single transition matrix for symbol 0 is

where r2 and r3 are complex conjugates of each other.

For the input 0m, the accepting probability Qx is calculated as

Due to the Cayley-Hamilton theorem and simplicity of eigenvalues, each entry of Bmx is a linear combination of rm1, rm2, and rm3. Thus, we can write fQx(0m) as

where the coefficients of rm2 and rm3 are also conjugates of each other. By using the following initial conditions

the coefficients can be calculated as

The polar forms of r2 and r3 are respectively

By picking the cutpoint λx=a=13x+1, we can have

We can conclude the proof by showing the existence of a string, say 0n, such that cos(nθx1+γx1) and cos(nθx2+γx2) have different signs.

The real line can be partitioned into intervals of length π, in which the function cos(⋅) does not change its sign — all borderline points are attached to “negative” intervals:

8 Our construction for unary PFAs

We present our construction222The construction here was given by the first author when he was a 12-th grade student in high school. for 3-state unary PFAs that can define uncountably many languages with a fixed cutpoint (e.g., 12). Similarly to binary PFA case, we introduce another parameter α in matrix Bx. Besides, we restrict the interval of x with (0,1/10). Let α∈(1/2,1]. The new matrix is defined as

Even though Bx,α is not a stochastic matrix in general, its eigenvalues are the identical to the eigenvalues of Bx:

Similarly to the calculations of Bx, we can write Bmx,α(3,1) as

for real values a′, b′, and c′. By using the initial conditions

the coefficients can easily be found as

Interestingly, B3x,α is a stochastic matrix:

Thus, we can define our new unary 3-state PFA, say Qx,α, by using B′x,α as the single transition matrix. The initial state is the first state, and the only accepting state is the third state. Therefore, by Eq. 3,

The languages recognized by the family of 3-state unary PFAs {Q′x∣x∈(0,1/10)} with cutpoint 12 form an uncountable set.