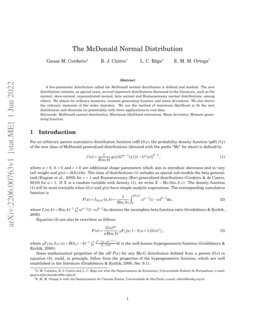 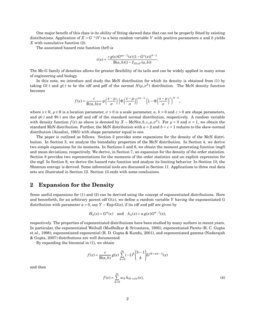 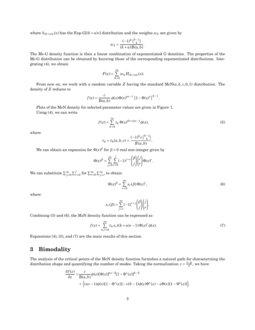 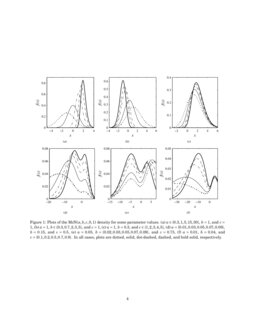 On Some Properties of the Beta Normal Distribution

The beta normal distribution is a generalization of both the normal dist...
L. C. Rêgo, et al. ∙

We study the p-generalized probit regression model, which is a generaliz...
Alexander Munteanu, et al. ∙

The Gamma Generalized Normal Distribution: A Descriptor of SAR Imagery

In this paper, we propose that relations between high order moments of d...
Marcel Ausloos, et al. ∙

The multivariate normal density is a monotonic function of the distance ...
Georgios Arvanitidis, et al. ∙

where a>0, b>0 and c>0 are additional shape parameters which aim to introduce skewness and to vary tail weight and g(x)=dG(x)/dx. The class of distributions (1) includes as special sub-models the beta generalized Eugene et al. (2002) for c=1 and Kumaraswamy (Kw) generalized distributions Cordeiro and de Castro (2010) for a=1. If X

is a random variable with density (

1), we write X∼Mc-G(a,b,c). The density function (1) will be most tractable when G(x) and g(x) have simple analytic expressions. The corresponding cumulative function is

Equation (2) can also be rewritten as follows

Some mathematical properties of the cdf F(x) for any Mc-G distribution defined from a parent G(x) in equation (3), could, in principle, follow from the properties of the hypergeometric function, which are well established in the literature (Gradshteyn and Ryzhik, 2000, Sec. 9.1).

One major benefit of this class is its ability of fitting skewed data that can not be properly fitted by existing distributions. Application of X=G−c(V) to a beta random variable V with positive parameters a and b yields X with cumulative function (2).

The Mc-G family of densities allows for greater flexibility of its tails and can be widely applied in many areas of engineering and biology.

In this note, we introduce and study the McN distribution for which its density is obtained from (1) by taking G(⋅) and g(⋅) to be the cdf and pdf of the normal N(μ,σ2) distribution. The McN density function becomes

The paper is outlined as follows. Section 2 provides some expansions for the density of the McN distribution. In Section 3, we analyze the bimodality properties of the McN distribution. In Section 4, we derive two simple expansions for its moments. In Sections 5 and 6, we obtain the moment generating function (mgf) and mean deviations, respectively. We derive, in Section 7, an expansion for the density of the order statistics. Section 8 provides two representations for the moments of the order statistics and an explicit expression for the mgf. In Section 9, we derive the hazard rate function and analyze its limiting behavior. In Section 10, the Shannon entropy is derived. Some inferential tools are discussed in Section 11. Applications to three real data sets are illustrated in Section 12. Section 13 ends with some conclusions.

2 Expansion for the Density

Some useful expansions for (1) and (2

) can be derived using the concept of exponentiated distributions. Here and henceforth, for an arbitrary parent cdf

G(x), we define a random variable Y having the exponentiated G distribution with parameter a>0, say Y∼Exp-G(a), if its cdf and pdf are given by

By expanding the binomial in (1), we obtain

The Mc-G density function is then a linear combination of exponentiated G densities. The properties of the Mc-G distribution can be obtained by knowing those of the corresponding exponentiated distributions. Integrating (4), we obtain

From now on, we work with a random variable Z having the standard McN(a,b,c,0,1) distribution. The density of Z reduces to

Plots of the McN density for selected parameter values are given in Figure 1.

Combining (5) and (6), the McN density function can be expressed as

The analysis of the critical points of the McN density function furnishes a natural path for characterizing the distribution shape and quantifying the number of modes. Taking the normalization z=x−μσ, we have

We refer to the term in curly brackets as s(z). At the critical points, where ∂f(z)∂z=0, we have s(z)=0, since the remaining terms of ∂f(z)∂z are strictly positive. Hence, the critical points satisfy the following implicit equation

By analyzing this expression, the bimodality conditions for the McN density can be established.

As a particular example, Figure 2(a) gives the plot of the solutions of (8) in terms of a for a fixed value of b=0.18. For a=0.15, there are three solutions indicated by filled dots (∙). Figure 2(b) provides the corresponding density plots. For a=0.15, only two of the marked points are indeed modes of the density function, since the remaining point characterizes a local minimum.

Figure 3(a)-(b) give plots of the solutions of (8) in terms of a for a fixed value of c and varying values of b; and for a fixed value of b and varying values of c, respectively. Analogously, Figure 3(c)-(d) provide plots in terms of b. Additionally, we note that the only parts of the implicit curve with probabilistic meaning are those situated in the region a>0 and b>0.

The sign of ∂2f(z)∂z2 is the same of ∂s(z)∂z. Then, at a mode, the condition ∂s(z)∂z≤0 holds. Explicit evaluation of ∂s(z)∂z yields

We are now able to prove the following result.

We consider the variational behavior of the critical points of f(z) with respect to changes in the parameter a. From equation (8), the first derivative of z with respect to a is

Since ϕ(z)[1−Φc(z)]>0, the sign of ∂z∂a depends entirely on the behavior of the denominator term. Moreover, except for the sign, this denominator is equal to ∂s(z)∂z. Thus, for any z, we have

If z is a mode location, then z is an increasing function of a.

Since cϕ(z)Φc(z)>0, the sign of ∂z∂b depends entirely on the behavior of the denominator term. Moreover, this denominator is equal to ∂s(z)∂z. Thus, for any z, we have

From equation (8), we can express a in terms of z for fixed values of b and c. Let ab,c(z) denote this function of z by fixing b and c. Hence,

Let a∗b,c denote the local maximum of ab,c(z). A similar analysis of the variation of the critical points in terms of b for several values of a and c can be made.

Due to its symmetric behavior, the discussion follows mutatis mutandis. So, from equation (8), we can express b in terms of z for fixed values of a and c. Let ba,c(z) denote such function given by

For each implicit curve ab,c(z), a critical point could be identified and marked with a bullet. The abscissa values of these critical points indicate the boundary value of a that makes the McN density function switch behavior from a bimodal distribution to a unimodal one. Figure 4(b) shows the modality regions of the McN distribution.

The standard normal quantile function can be expanded as Steinbrecher (2002)

By application of an equation in Gradshteyn and Ryzhik 2000, Sec. 0.314 for a power series raised to a positive integer, n, we obtain

Here, the coefficients cn,i for i=1,2,… are easily obtained from the recurrence equation

The moments of the McN distribution can be determined from equation (14), where the quantities cn,i are derived from (13) using the a′is above.

We now provide a second representation for μ′n. The standard normal cdf can be expressed as

By making use of the binomial expansion and interchanging terms, we have

Using the series expansion for the error function erf(⋅)

is odd. The moments of the standard McN distribution is calculated from equation (

In this section, we provide a representation for the mgf of the McN(a,b,0,1) distribution, say M(−s)=exp(−sZ). From equation (7), we obtain

where the coefficients cr,j are calculated from the recurrence equation (13) with the a′is given before. We have

) is the main result of this section. The characteristic function (chf)

where the coefficients cr,j are obtained from (13) from the a′is just given before (17).

where the integral H(j,q)=∫j0xjexp(−x22)dx can be easily determined as Whittaker and Watson (1990)

where Mk,m(x) is the Whittaker function. This function can be expressed in terms of the confluent hypergeometric function

Hence, we have all quantities to obtain

The density function fi:n(x) of the ith order statistic for i=1,…,n from data values X1,…,Xn following the standard McN distribution can be expressed as

where the coefficients dn,p are obtained from the recurrence equation

where dn,0=vn0. The density function (22) can be rewritten as

where the coefficient gi:n(p,r) is given by

where τn,p+r is easily obtained from (15). Then, the ordinary moments of the McN order statistics are simple linear functions of the PWMs of the normal distribution. An alternative formula can be immediately derived from (23) by comparing equations (10) and (14). We have