An urn contains a known number of balls of two different colors. We describe the random variable counting the smallest number of draws needed in order to observe at least c of both colors when sampling without replacement for a pre-specified value of c=1,2,... . This distribution is the finite sample analogy to the maximum negative binomial distribution described by Zhang, Burtness, and Zelterman (2000). We describe the modes, approximating distributions, and estimation of the contents of the urn. 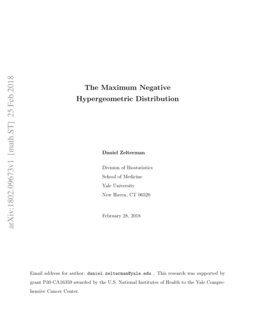 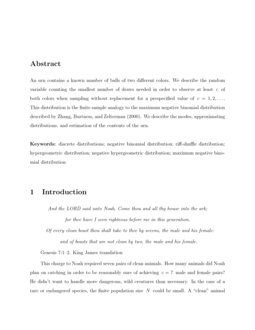 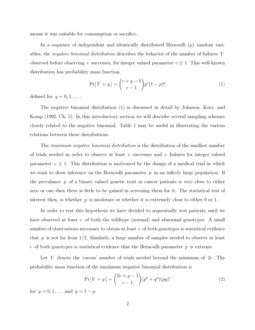 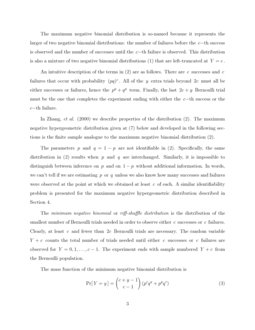 An urn contains a known number of balls of two different colors. We describe the random variable counting the smallest number of draws needed in order to observe at least c of both colors when sampling without replacement for a prespecified value of c=1,2,…. This distribution is the finite sample analogy to the maximum negative binomial distribution described by Zhang, Burtness, and Zelterman (2000). We describe the modes, approximating distributions, and estimation of the contents of the urn.

And the LORD said unto Noah, Come thou and all thy house into the ark;

for thee have I seen righteous before me in this generation.

Of every clean beast thou shalt take to thee by sevens, the male and his female:

and of beasts that are not clean by two, the male and his female.

This charge to Noah required seven pairs of clean animals. How many animals did Noah plan on catching in order to be reasonably sure of achieving c=7 male and female pairs? He didn’t want to handle more dangerous, wild creatures than necessary. In the case of a rare or endangered species, the finite population size N could be small. A “clean” animal meant it was suitable for consumption or sacrifice.

In a sequence of independent and identically distributed Bernoulli (p) random variables, the negative binomial distribution describes the behavior of the number of failures Y observed before observing c successes, for integer valued parameter c≥1

The maximum negative binomial distribution is the distribution of the smallest number of trials needed in order to observe at least c successes and c failures for integer valued parameter c≥1. This distribution is motivated by the design of a medical trial in which we want to draw inference on the Bernoulli parameter p in an infitely large population. If the prevalance p of a binary valued genetic trait in cancer patients is very close to either zero or one then there is little to be gained in screening them for it. The statistical test of interest then, is whether p is moderate or whether it is extremely close to either 0 or 1.

Let Y denote the ‘excess’ number of trials needed beyond the minimum of 2c. The probability mass function of the maximum negative binomial distribution is

An intuitive description of the terms in (2) are as follows. There are c successes and c failures that occur with probability (pq)c. All of the y extra trials beyond 2c must all be either successes or failures, hence the py+qy term. Finally, the last 2c+y Bernoulli trial must be the one that completes the experiment ending with either the c−th success or the c−th failure.

The parameters p and q=1−p are not identifiable in (2). Specifically, the same distribution in (2) results when p and q are interchanged. Similarly, it is impossible to distinguish between inference on p and on 1−p without additional information. In words, we can’t tell if we are estimating p or q unless we also know how many successes and failures were observed at the point at which we obtained at least c of each. A similar identifiability problem is presented for the maximum negative hypergeometric distribution described in Section 4.

The minimum negative binomial or riff-shuffle distribution is the distribution of the smallest number of Bernoulli trials needed in order to observe either c successes or c failures. Clearly, at least c and fewer than 2c Bernoulli trials are necessary. The random variable Y+c counts the total number of trials needed until either c successes or c failures are observed for Y=0,1,…,c−1. The experiment ends with sample numbered Y+c from the Bernoulli population.

The mass function of the minimum negative binomial distribution is

The three discrete distributions described up to this point are based on sampling from an infinitely large Bernoulli (p) parent population. Each of these distributions also has a finite sample analogy. These will be described next.

In the example of the charge to Noah, we have c=7 male/female pairs of animals captured from a finite population of m males and N−m females.

In Section 2 we give the probability mass function of the maximum negative hypergeometric distribution. Section 3 details some approximations to this distribution. In Section 4 we discuss estimation of the parameter that describes the contents of the urn.

An urn contains N balls: m of one color; and the remaining N−m of another color. We continue sampling from the urn without replacement until we have observed c balls of both colors, for integer parameter c≥1. Sampling with replacement is the same as sampling from the maximum negative binomial distribution (2) with parameter p=m/N

Let Y denote the random variable counting the number of extra draws needed beyond the minimum 2c. That is, on draw numbered Y+2c we will have first observed at least c of both colors. All of the Y extra draws from the urn must be of the same color so there will be c of one color and Y+c of the other color at the end of the experiment. We will describe the distribution and properties of this random variable.

For k=1,2,… define the factorial polynomial

defined for the range of Y:

The integer valued parameters (N,m,c) are constrained to

Special cases of this distribution are as follows. For general parameter values,

If c=m=N/2 then the maximum negative hypergeometric distribution is degenerate and all of its probability is a point mass at Y=0. In words, if c=m=N−m then there can be only one possible outcome. In this case, all of the balls in the urn must be drawn before we can observe c balls of both colors.

and zero otherwise. This is also the form of the distribution for c=1 and m=N−1.

Lemma 1. For fixed values of c≥1, let N and m both grow large such that m/N=p for p bounded between zero and one. Then the behavior of the maximum negative hypergeometric random variable (6) approaches the maximum negative binomial distribution (2) with parameters c and p.

Proof. Values of Y remain bounded with high probability under these conditions. In (6) we write

We can also write

We next describe the modes for this distribution. The maximum negative hypergeometric distribution can have either one or two modes. Write

to show that this distribution always has at least one local mode at Y=0.

An approximate gamma distribution is illustrated in Fig. 4. Under the conditions of the following lemma, the local mode at

Lemma 2. For fixed c≥1, if m grows as θN1/2 for large N and some θ>0 then θY/N1/2 behaves approximately as the sum of c independent standard exponential random variables.

Under the conditions of his lemma, the term

will be much smaller than Δ and can be ignored.

For ϵ near zero, write

ignoring terms that tend to zero for large vales of N. This is the density function of the sum of c independent, standard exponential random variables.

∣Z∣ is said to be standard half-normal or folded normal. The density function of the random variable X=∣Z∣ is

for x≥0 (Stuart and Ord, 1987, p 117). The approximate half-normal behavior of the maximum negative hypergeometric distribution is illustrated in Fig. 5.

Lemma 3. When N becomes large, if m=N/2 and c grows as N1/2 then Y/(2c)1/2 behaves approximately as a standard half-normal random variable.

The proof involves expanding all factorials in (7) using Stirling’s approximation. The details are provided in Appendix A.

The normal approximation to the maximum negative hypergeometric distribution can be seen in Fig. 3. This is proved more formally in Lemma 4, below. No generality is lost by requiring m>N/2 because m and N−m can be interchanged to yield the same distribution.

Lemma 4. For large values of N, suppose c grows as N1/2 and m=Np for 1/2<p<1. Then (Y−μ)/σ behaves approximately as standard normal where

The proof of thsi lemma is given in Appendix B. The details involve using Stirling’s approximation to all of the factorials in (7) and expanding these in a two-term Taylor series.

The most practical situation concerning parameter estimation involves estimating the m parameter when c and N are both known. In terms of the original, motivating example drawing inference on the genetic markers in cancer patients, the finite population size N will be known, and the parameter c is chosen by the investigators in order to achieve specified power and significance levels. The m parameter describes the composition of the N individuals in the finite-sized population. The value of m is known without error if all N subjects are observed.

The estimation of m in this section is made on the basis of a single observation of the random variable Y. We will treat the unknown m parameter as continuous valued rather than as a discrete integer as it has been used in previous sections.

The log-likelihood kernel function of m in (6) is

Intuitively, if the observed value Y is small then we are inclined to believe that the urn is composed of an equal number of balls of both colors. That is, if we quickly observe c of both colored balls then this is good statistical evidence of an even balance of the two colors in the urn. Conversely, if the observed Y is relatively large then we will estimate an imbalance in the composition of the urn. Without the additional knowledge of the number of successes and failures observed then we are unable to tell if we are estimating m or N−m.

More generally, there will be either one mode of Λ(m) at ˆm=N/2 or else two modes, symmetric about N/2 depending on the sign of

Useful rules for differentiating factorial polynomials are as follows. For c≥1,

Use these rules to write

and show that the likelihood Λ(m) always has a critical value at m=N/2:

The critical point of Λ at m=N/2 may either be a global maximum or else a local minimum as seen in the example of Fig. 6. This distinction depends on the sign of the second derivative Λ′′ of Λ.

The second derivative of Λ can be found from

The first summation in ϕ is zero when y=0 or 1. The function ϕ is then negative for small values of y demonstrating that the maximum likelihood estimate of m is ˆm=N/2 in these cases. Similarly, ϕ is an increasing function of y and may eventually become positive for larger values of y, so that Λ will have two modes. These modes are symmetric about N/2 because

Lingappiah, G.S. (1987). Some variants of the binomial distribution. Bulletin of the Malaysian Mathematical Society 10: 82–94.

Appendix A: Proof of the half-normal approximation

In all of the following expansions it is useful to keep in mind that c=cN is approximately equal to N1/2 and Y=\rm Op(N1/4). Write T1 as

Similarly, we can write

These expressions for T1 and T2 in Pr[Y] give

is the density of the folded normal distribution, except for terms that tend to zero with high probability.

The details of the proof of Lemma 4 are given here. Define Ω as

in (7) is much smaller than Ω and can be ignored under the conditions of this lemma.

Write out all of the terms in S1 to show

We can write S2 as

for ϵ near zero to show

where Z is a \rm Op(1) random variable, giving

Next write S3 as