Recently, a new stabilizer free weak Galerkin method (SFWG) is proposed, which is easier to implement and more efficient. The main idea is that by letting j≥ j_0 for some j_0, where j is the degree of the polynomials used to compute the weak gradients, then the stabilizer term in the regular weak Galerkin method is no longer needed. Later on in <cit.>, the optimal of such j_0 for certain types of finite element spaces was given. In this paper, we propose a new efficient SFWG scheme using the lowest possible orders of piecewise polynomials for triangular meshes in 2 D with the optimal order of convergence. 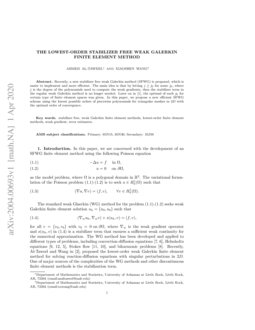 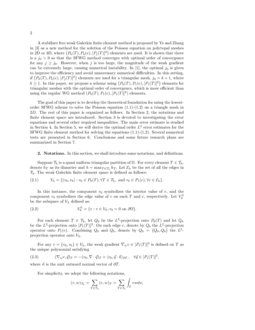 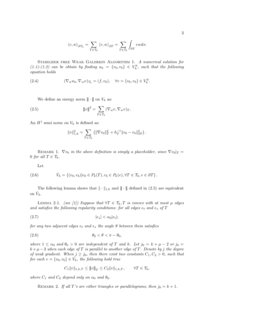 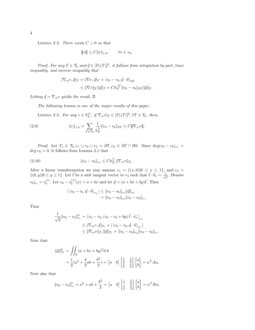 A P_k+2 polynomial lifting operator on polygons and polyhedrons

The Weak Galerkin Finite Element Method for the Transport-Reaction Equation

In this paper, we are concerned with the development of an SFWG finite element method using the following Poisson equation

as the model problem, where Ω is a polygonal domain in R2. The variational formulation of the Poisson problem (1)-(2) is to seek u∈H10(Ω) such that

for all v={v0,vb} with vb=0 on ∂Ω, where ∇w is the weak gradient operator and s(uh,v) in (4) is a stabilizer term that ensures a sufficient weak continuity for the numerical approximation. The WG method has been developed and applied to different types of problems, including convection-diffusion equations [7, 6], Helmholtz equations [9, 12, 5], Stokes flow [11, 10], and biharmonic problems [8]. Recently, Al-Taweel and Wang in [2], proposed the lowest-order weak Galerkin finite element method for solving reaction-diffusion equations with singular perturbations in 2D. One of major sources of the complexities of the WG methods and other discontinuous finite element methods is the stabilization term.

A stabilizer free weak Galerkin finite element method is proposed by Ye and Zhang in [3] as a new method for the solution of the Poisson equation on polytopal meshes in 2D or 3D, where (Pk(T),Pk(e),[Pj(T)]2) elements are used. It is shown that there is a j0>0 so that the SFWG method converges with optimal order of convergence for any j≥j0. However, when j is too large, the magnitude of the weak gradient can be extremely large, causing numerical instability. In [1], the optimal j0 is given to improve the efficiency and avoid unnecessary numerical difficulties. In this setting, if (Pk(T),Pk(e),[Pj(T)]2) elements are used for a triangular mesh, j0=k+1, where k≥1. In this paper, we propose a scheme using (P0(T),P1(e),[P1(T)]2) elements for triangular meshes with the optimal order of convergence, which is more efficient than using the regular WG method (P0(T),P1(e),[P1(T)]2) elements.

The goal of this paper is to develop the theoretical foundation for using the lowest-order SFWG scheme to solve the Poisson equation (1)-(2) on a triangle mesh in 2D. The rest of this paper is organized as follows. In Section 2, the notations and finite element space are introduced. Section 3 is devoted to investigating the error equations and several other required inequalities. The main error estimate is studied in Section 4. In Section 5, we will derive the optimal order L2 error estimates for the SFWG finite element method for solving the equations (1)-(2). Several numerical tests are presented in Section 6. Conclusions and some future research plans are summarized in Section 7.

In this section, we shall introduce some notations, and definitions.

Suppose Th is a quasi uniform triangular partition of Ω. For every element T∈Th, denote hT as its diameter and h=maxT∈ThhT. Let Eh be the set of all the edges in Th. The weak Galerkin finite element space is defined as follows:

For any v={v0,vb}∈Vh, the weak gradient ∇wv∈[P1(T)]2 is defined on T as the unique polynomial satisfying

is the unit outward normal vector of

A numerical solution for (1)-(2) can be obtain by finding uh={v0,vb}∈V0h, such that the following equation holds

An H1 semi norm on Vh is defined as:

∇v0 in the above definition is simply a placeholder, since ∇v0|T=0 for all T∈Th.

The following lemma shows that ∥⋅∥1,h and |||⋅||| defined in (9) are equivalent on ^Vh. (see [1]) Suppose that ∀T∈Th,T is convex with at most μ edges and satisfies the following regularity conditions: for all edges et and es of T

If all T’s are either triangles or parallelograms, then j0=k+1.

There exists C>0 so that

For any T∈Th and →q∈[P1(T)]2, it follows from integration by part, trace inequality, and inverse inequality that

After a linear transformation we may assume

Since B−A is positive definite,

By a scaling argument and

Similarly, we can show that

Similarly, for any T∈Th with at least one edge on ∂Ω,

we need to show that

Scale L1 and L3 if necessary so that

Thus after a scaling we have

By a scaling argument,

where Ti∈B2h and shares at least one edge with T. This process can be continued, until we have visited every T∈Th and have

where Ti shares at least 1 edge with T. (13) follows from this immediately.

Combining Lemmas 2 and 2, we have the following theorem. There exists C1>0 and C2>0 such that

In this section, we derive the error estimate Algorithm 1.

For any function ψ∈H1(T), the following trace inequality holds true:

(Inverse Inequality) There exists a constants C such that for any piecewise polynomial ψ|T∈Pk(T),

Let u∈H2+i0(Ω),i=0,1, be the solution of the problem and Th be a finite element partition of Ω satisfying the shape regularity assumptions. Then, the L2 projections Q0 and Qh satisfies

which completes the proof. Let eh=Qhu−uh∈Vh. Then for any v∈V0h, we have

where ℓ(u,v) is defined as follows,