We present an orthogonal matrix outer product decomposition for the fourth-order conjugate partial-symmetric (CPS) tensor and show that the greedy successive rank-one approximation (SROA) algorithm can recover this decomposition exactly. Based on this matrix decomposition, the CP rank of CPS tensor can be bounded by the matrix rank, which can be applied to low rank tensor completion. Additionally, we give the rank-one equivalence property for the CPS tensor based on the SVD of matrix, which can be applied on the rank-one approximation for CPS tensors. 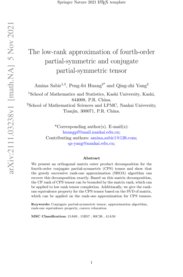 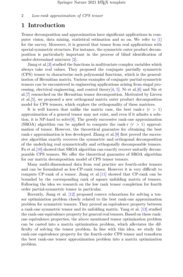 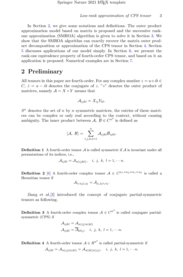 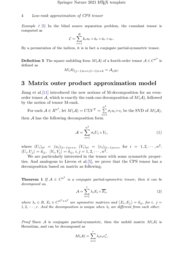 In this paper we study the problem of recovering a tensor network decomp...
Karim Halaseh, et al. ∙

In this paper we study the training dynamics for gradient flow on over-p...
Rong Ge, et al. ∙

We investigate the effect of an ε-room of perturbation tolerance on symm...
Alperen A. Ergür, et al. ∙

We propose a new framework for the analysis of low-rank tensors which li...
Nauman Shahid, et al. ∙

Tensor decomposition and approximation have significant applications in computer vision, data mining, statistical estimation and so on. We refer to

kolda2009tensor for the survey. Moreover, it is general that tensor from real applications with special symmetric structure. For instance, the symmetric outer product decomposition is particularly important in the process of blind identification of under-determined mixtures comon2008symmetric .

It is well known that unlike the matrix case, the best rank-r (r>1) approximation of a general tensor may not exist, and even if it admits a solution, it is NP-hard to solvede2008tensor . The greedy successive rank-one approximation (SROA) algorithm can be applied to compute the rank-r (r>1) approximation of tensor. However, the theoretical guarantee for obtaining the best rank-r approximation is less developed. Zhang et al.zhang2001rank first proved the successive algorithm exactly recovers the symmetric and orthogonal decomposition of the underlying real symmetrically and orthogonally decomposable tensors. Fu et al.2018Successive showed that SROA algorithm can exactly recover unitarily decomposable CPS tensors. We offer the theoretical guarantee of SROA algorithm for our matrix decomposition model of CPS tensor tensors.

Many multi-dimensional data from real practice are fourth-order tensors and can be formulated as low-CP-rank tensor. However it is very difficult to compute CP-rank of a tensor. Jiang et al.Jiang2018Low showed that CP-rank can be bounded by the corresponding rank of square unfolding matrix of tensors. Following the idea we research on the low rank tensor completion for fourth order partial-symmetric tensor in particular.

In Section 2, we give some notations and definitions. The outer product approximation model based on matrix is proposed and the successive rank-one approximation (SMROA) algorithm is given to solve it in Section 3. We show that the SMROA algorithm can exactly recover the matrix outer product decomposition or approximation of the CPS tensor in Section 4. Section 5 discusses applications of our model simply. In Section 6, we present the rank-one equivalence property of fourth-order CPS tensor, and based on it an application is proposed. Numerical examples are in Section 7.

All tensors in this paper are fourth-order. For any complex number z=a+ib∈C, ¯z=a−ib denotes the conjugate of z. "∘" denotes the outer product of matrices, namely A=X∘Y means that

Sn denotes the set of n by n symmetric matrices, the entries of these matrices can be complex or only real according to the context, without causing ambiguity. The inner product between A, B∈Cn4 is defined as

A fourth-order tensor A is called symmetric if A is invariant under all permutations of its indices, i.e.,

de2007fourth In the blind source separation problem, the cumulant tensor is computed as

By a permutation of the indices, it is in fact a conjugate partial-symmetric tensor.

Jiang et al.Jiang2018Low introduced the new notions of M-decomposition for an even-order tensor A, which is exactly the rank-one decomposition of M(A), followed by the notion of tensor M-rank.

For each A∈Rn4, let M(A)=UΣVT=n2∑i=1σiui∘vi be the SVD of M(A), then A has the following decomposition form

We are particularly interested in the tensor with some symmetric properties. And analogous to Lieven et al.de2007fourth , we prove that the CPS tensor has a decomposition based on matrix as following.

If A∈Cn4 is a conjugate partial-symmetric tensor, then it can be decomposed as,

where λi∈R, Ei∈Cn2×n2 are symmetric matrices and ⟨Ei,Ej⟩=δij, for i, j=1,2,⋯,r. And the decomposition is unique when λi are different from each other.

Since A is conjugate partial-symmetric, then the unfold matrix M(A) is Hermitian, and can be decomposed as

This is also true for CPS fourth-order tensor.

It is obvious that rankM(A)≥rankSM(A). On the other hand, if rankSM(A)=r, we have rank(M(A))≤r. Since rank(M(A))=rankM(A), we obtain the desired conclusion. ∎

The first part is obvious according to Theorem 3. Since all matrices belonging to Sn form a n(n+1)2

-dimensional vector space, we have

Fu et al. gave a rank-one decomposition of vector form for the CPS tensor based on Theorem 1 as follows,

(fu2018decompositions, , Theorem 3.2) A∈Cn4 is CPS if and only if it has the following partial-symmetric decomposition

where λj∈R and ai∈Cn. That is, a CPS tensor can be decomposed as the sum of rank-one CPS tensors.

From Corollary 3, partial-symmetric tensor A=r∑i=1λiEi∘Ei, where Ei are symmetric. So it can be decomposed as ∑rij=1βjiuji(uji)⊤, thus

From the proof of Corollary 5, we can see that if pi≠qi, pTiqi=0. Whether this decomposition form is the compactest will be one of our future work.

We can discuss the case of skew partial-symmetric tensor in parallel.

Based on Theorem 1, we propose a matrix outer product approximation model for the CPS tensor as following.

The successive rank-one approximation algorithm can also be applied to the conjugate partial symmetric tensors to find the matrix outer product decompositions or approximations, as shown in Algorithm 1.

The main optimization problem in Algorithm 1 could be expressed as

The objective function of (6) can be rewritten as

From which we can derive that problem (6) is equivalent to

and λ∗=⟨A,X∗∘¯X∗⟩. We can solve (7) by transforming it into matrix eigenproblem as follows,

if A is symmetric about the first two and the last two mode respectively,

It is obvious that for partial-symmetric tensor, we also have

In this section, we give the theoretical analysis of exact recovery for CPS tensors by the SMROA algorithm.

Let A be a CPS tensor with rankM(A)=r, that is

If λi are different from each other, then the SMROA algorithm will obtain the exact decomposition of A after r iterations.

We first claim the following lemma before proving the above theorem.

Let A be a CPS tensor with rankM(A)=r, that is

λi are different from each other. Suppose

On the other hand, the optimality leads to

This proposition directly follows from the proof of Lemma 8.

According to the proof in Lemma 8, if A is a partial-symmetric tensor with entries whose imaginary part is not zero, the SMROA algorithm may fail. This is because that if ^X1=eiθX1, ^X1∘^X1≠X1∘X1.

The following theorem shows that the CP rank of the CPS tensor A can be bounded by rankM(A).

For CPS tensor A∈Cn4=rankM(A)∑i=1λiEi∘Ei, it holds that

Scenarios like colored video data with static background is more likely to be a low-CP-rank tensorJiang2018Low . So the completion problem for this kind of data can be formulated as

(10) is intractable to deal with directly, since the CP rank of a tensor is generally hard to estimate. Here we follow the idea of Jiang et al.Jiang2018Low to cope with the completion problem of partial-symmetric tensor. According to Theorem 10, we may approximate it by

The following example gives an intuitive explanation for the rationality of the approximation.

(11) is relaxed as a low rank approximation problem with nuclear norm regular term,

We can apply the Fixed Point Continuation(FPC) algorithmMa2011Fixed to solve (12).

μk+1=η∗μk, where 0<η<1. The convergence of this algorithm is guaranteed Ma2011Fixed . Since the iteration in Algorithm 2 does not change the symmetric property of Xk when Ω and A are partial-symmetric, the solution X∗ is still partial-symmetric.

Parallel to the sparse rank-one approximation problem, we can also discuss the low rank matrix outer product "rank-one" approximation as follows based on the matrix decomposition model proposed in last section.

We modify the proximal linearized minimization algorithm (PLMA) proposed by Bolte et al.Bolte2014Proximal to solve problem (13). The iterative scheme is

where Dτ(Σ)=diag((σi−τ)+), U0, V0 are the singular vectors associated with singular values greater than τ.

Thus we can compute the analytical solution of ^Xk+1 in (14), that is,

For the iterative scheme, we have the following sufficient descent property.

Let f be continuously diferentiable over X and its gradient ∇Xf be Lf-Lipschitz continuous locally. Then for any tk>Lf, it holds that

According to (14), we also obtain that

The desired inequlity then follows. ∎

6 The equivalence property of CPS tensors

In this section, we prove that a fourth-order CPS tensor, denoted as T∈Cn4ps, is rank-one if and only if a specific matrix unfolding of T is rank-one. We first prove the following lemma.

Since T is rank-one, we have

According to the conjugate symmetry of T, we obtain that T[1,2;3,4]=vec(x∘y)∘vec(w∘z) is a Hermitian matrix, thus, there exists λ∈R such that w∘z=λ¯x∘¯y. This further implies that there are α,β∈C such that w=α¯x, z=β¯y and αβ=λ. Therefore, we have

On the other hand, T is symmetric about the first and the second indexes, so x=y and

According to Lemma 15, T can be represented as