Compared to minimization problems, the min-max landscape in machine learning applications is considerably more convoluted because of the existence of cycles and similar phenomena. Such oscillatory behaviors are well-understood in the convex-concave regime, and many algorithms are known to overcome them. In this paper, we go beyond the convex-concave setting and we characterize the convergence properties of a wide class of zeroth-, first-, and (scalable) second-order methods in non-convex/non-concave problems. In particular, we show that these state-of-the-art min-max optimization algorithms may converge with arbitrarily high probability to attractors that are in no way min-max optimal or even stationary. Spurious convergence phenomena of this type can arise even in two-dimensional problems, a fact which corroborates the empirical evidence surrounding the formidable difficulty of training GANs. 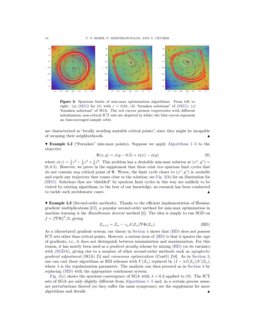 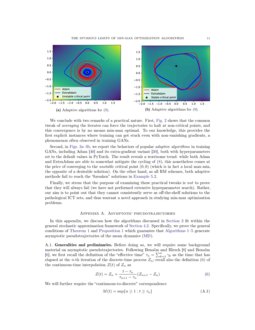 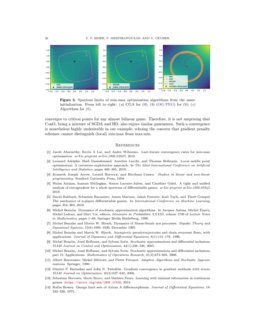 where X, Y are subsets of a Euclidean space and Φ:X×Y→R may be non-convex/non-concave. Given an algorithm for solving (SP), the following fundamental questions arise:

The goal of this paper is to provide concrete answers to (⋆ ‣ 1) and to study their practical implications for a wide array of existing methods.

[pinto2017robust], and other models of adversarial training [madry2018towards]. In this broad setting, it has become empirically clear that the joint training of two neural networks with competing objectives is fundamentally more difficult than training a single NN of similar size and architecture. The latter task boils down to successfully finding a (good) local minimum of a non-convex function, so it is instructive to revisit (⋆ ‣ 1) in the context of (non-convex) minimization problems.

In this case, much of the theory on stochastic gradient descent (SGD) methods – the “gold standard” for deep NN training – can be informally summed up as follows:

At first glance, these positive results might raise high expectations for solving (SP). Unfortunately, one can easily find counterexamples with very simple bilinear games of the form Φ(x,y)=x⊤Ay: naïvely applying stochastic gradient descent/ascent (SGDA) methods in this case leads to recurrent orbits that do not contain any critical point of Φ. Such a phenomenon has no counterpart in non-convex minimization, and is fundamentally tied to the min-max structure of (SP).

Although these studies have certainly led to fruitful results, the realm beyond bilinear games and (locally) idealized objectives remains somewhat unexplored (with a few exceptions that we discuss in detail below). In particular, a convergence theory for general non-convex/non-concave problems is still lacking.

In this paper, we aim to bridge this gap by providing precise answers to (⋆ ‣ 1) for a wide range of min-max optimization algorithms that can be seen as generalized Robbins–Monro (RM) schemes [RM51]. Mirrorring the minimization perspective, we prove that, for any such algorithm A:

The most critical implication of our theory is that one can reduce the long-term behavior of a training algorithm to its associated internally chain-transitive (ICT) sets, a notion deeply rooted in the study of dynamical systems [Bow75, Con78, BH96, Ben99, BHS05] that formalizes the idea of “discrete limits of continuous flows”; cf. Section 4. As an example, in minimization problems, one can prove that the ICT sets of SGD consist solely of components of critical points; on the other hand, we show that ICT sets in min-max optimization can exhibit drastically more complicated structures, even when X=Y=R. In particular, we establish the following negative results:

Finally, we provide numerical illustrations of the above, which further show that common practical tweaks (such as averaging or adaptive algorithms) also fail to address these problematic cases.

To our knowledge, the convergence to non-critical sets in (SP) has only been systematically studied in a few settings. Besides the bilinear games alluded to above, other instances include the “almost bilinear games” [abernethy2019last] and deterministic gradient descent/ascent (GDA) applied to “hidden bilinear games” [FVP19a]. In contrast to these works, our framework does not impose any structural assumption and requires only mild regularity of Φ, and our results apply to many existing methods beyond (S)GDA; cf. Section 3. The generality of our approach is made possible by foundational results in dynamical systems [Ben99, BH96], which have not been exploited before in the context of min-max optimization, and have only recently been applied to learning in games with the aim of showing convergence to (local) Nash equilibria [PL12, BHS05, BHS06, PML17, mazumdar2020gradient, CHM17-NIPS, BM17, BLM18, MZ19, BBF18].

We focus on general problems of the form (SP) with X=RdX, Y=RdY, and Φ assumed C1. To ease notation, we will denote z=(x,y), Z=X×Y and d=dX+dY. In addition, we will write

for the (min-max) gradient field of Φ, and we will assume that V is Lipschitz. In some cases we will also require V to be C1 and we will write J(z) for its Jacobian; this additional assumption will be stated explicitly whenever invoked.

From an algorithmic standpoint, we will focus exclusively on the black-box optimization paradigm [Nes04] with stochastic first-order oracle (SFO) feedback; algorithms with a more complicated feedback structure (such as a best-response oracle [jin2019local, naveiro2019gradient, fiez2019convergence]) or based on mixed-strategy sampling [hsieh2019finding, domingo2020mean] are not considered in this work. In detail, when called at z=(x,y) with random seed ω∈Ω, an stochastic first-order oracle (SFO

where the error term U(z;ω) captures all sources of uncertainty in the model (e.g., the selection of a minibatch in GAN training models, system state observations in reinforcement learning, etc.). Regarding this error term, we will assume throughout that it is zero-mean and sub-Gaussian:

, and it can be further relaxed with little loss of generality to finite variance

E[∥U(z;ω)∥2]≤σ2. To streamline our discussion, we will present our results in the sub-Gaussian regime and we will rely on a series of remarks to explain any modifications required for different assumptions on U.

Much of our analysis will focus on iterative algorithms that can be cast in the abstract Robbins–Monro framework of stochastic approximation [RM51]:

In the above, the error term Wn is generated after Zn; thus, by default, Wn is not adapted to the history (natural filtration) Fn\coloneqqH(Z1,…,Zn) of Zn. For concision, we will write

can be seen as a noisy estimate of

V(Zn). In more detail, to differentiate between “random” (zero-mean) and “systematic” (non-zero-mean) errors in Vn, it will be convenient to further decompose the error process Wn as

where bn=E[Wn\nonscript|\nonscriptFn] represents the systematic component of the error and Un=Wn−bn captures the random, zero-mean part. In view of all this, we will consider the following descriptors for Wn: equationparentequation

The precise behavior of Bn and σ2n will be examined on a case-by-case basis below.

In the rest of this section, we discuss how a wide range of algorithms used in the literature can be seen as special instances of the general template (RM) above.

The basic SGDA algorithm – also known as the Arrow–Hurwicz method [AHU58] – queries an SFO and proceeds as:

where ωn∈Ω (n=1,2,…) is an independent and identically distributed (i.i.d.) sequence of oracle seeds. As such, (SGDA) admits a straightforward RM representation by taking Wn=Un=U(Zn;ωn) and bn=0. ▲

A common variant of SGDA, is to alternate the updates of the min/max variables, resulting in the alternating stochastic gradient descent/ascent (alt-SGDA) method:

Going beyond (SGDA), the (stochastic) extra-gradient algorithm exploits the following principle [Kor76, Nem04, JNT11]: given a “base” state Zn, the algorithm queries the oracle at Zn to generate a leading state Z+n and then updates Zn with oracle information from Z+n. Assuming SFO feedback as above, this process may be described as follows:

Compared to (SGDA), the scheme (SEG) involves two oracle queries per iteration, which is considerably more costly. An alternative iterative method with a single oracle query per iteration was proposed by Pop80:

Popov’s extra-gradient has been rediscovered several times and is more widely known as the optimistic gradient (OG) method in the machine learning literature [RS13-COLT, CYLM+12, DISZ18, HIMM19]. In unconstrained min-max optimization, (OG/PEG) turns out to be equivalent to a number of other existing methods, including “extrapolation from the past” [GBVV+19], reflected gradient [malitsky2020forward], and the “prediction method” of [yadav2017stabilizing]. ▲

When first-order feedback is unavailable, a popular alternative is to obtain gradient information of Φ via zeroth-order observations [liu2019min]. This idea can be traced back to the seminal work of KW52 and the subsequent development of the simultaneous perturbation stochastic approximation (SPSA) method by Spa92. In our setting, this leads to the recursion:

where δn↘0 is a vanishing “sampling radius” parameter, ωn is drawn uniformly at random from the composite basis Ω=EX∪EY of Z=X×Y, and the “±” sign is equal to −1 if ωn∈EX and +1 if ωn∈EY. Viewed this way, the interpretation of (5) as a Robbins–Monro method is immediate; furthermore, a straightforward calculation (that we defer to the supplement) shows that the sequence of gradient estimators Vn in (5) has Bn=O(δn) and σ2n=O(1/δ2n). ▲

Further examples that can be cast in the general framework (RM) include the negative momentum method [gidel2019negative], generalized OG schemes [mokhtari2019unified], and centripetal acceleration [peng2020training]; the analysis is similar and we omit the details. Certain scalable second-order methods can also be viewed as Robbins–Monro schemes, but the driving vector field V is no longer the gradient field of Φ; we discuss this in LABEL:ex:2nd-order and the supplement.

This is motivated by the fact that ˙z(t) can be seen as the continuous-time limit of the finite difference quotient (Zn+1−Zn)/γn: in this way, if the error term Wn in (RM) is sufficiently well-behaved, it is plausible to expect that the iterates of (RM) and the solutions of (MD) eventually come together. This approach has proved very fruitful when the mean dynamics (MD) comprise a gradient system, i.e., V=−∇f for some (possibly non-convex) f:Z→R. In this case (and modulo mild assumptions), the systems (RM) and (MD) both converge to the critical set of f, see e.g., [Lju77, KC78, BMP90, KY97, BT00].

On the other hand, the min-max landscape is considerably more involved. The most widely known illustration is given by the bilinear objective Φ(x,y)=xy: in this case (see Fig. 1), the trajectories (MD) comprise periodic orbits of perfect circles centered at the origin (the unique critical point of Φ). However, the behavior of different RM schemes can vary wildly, even in the absence of noise (σ=0): trajectories of (SGDA) spiral outwards, each converging to an (initialization-dependent) periodic orbit; instead, trajectories of (SEG) spiral inwards, eventually converging to the solution z∗=(0,0).

This particular difference between gradient and extra-gradient schemes has been well-documented in the literature, cf. [DISZ18, GBVV+19, MLZF+19]. More pertinent to our theory, it also raises several key questions:

The rest of this section is devoted to providing precise answers to these questions.

We begin by introducing a measure of “closeness” between the iterates of (RM) and the solution orbits of (MD). To do so, let τn=∑nk=1γk denote the “effective time” that has elapsed at the n-th iteration of (RM

), and define the continuous-time interpolation

This comparison criterion is due to BH96 and it plays a central role in our analysis. In words, it simply posits that Z(t) eventually tracks the flow of (MD) with arbitrary accuracy over windows of arbitrary length; as a result, if Zn is an asymptotic pseudotrajectory (APT) of (MD), it is reasonable to expect its behavior to be closely correlated to that of (MD).

Our first result below makes this link precise. To state it, we will make the following assumptions:

both assumed to hold with probability 1. Under these blanket requirements, we have:

Suppose that (RM) is run with a step-size policy γn such that ∑nγn=∞, limnγn=0, and Eqs. A1–A2 hold. Then, with probability 1, one of the following holds: itemsep=topsep= Zn is an APT of (MD); or Zn is unbounded (and hence, non-convergent).