The Kundu-Eckhaus equation is a nonlinear partial differential equation which seems in the quantum field theory, weakly nonlinear dispersive water waves and nonlinear optics. In spite of its importance, exact solution to this nonlinear equation are rarely found in literature. In this work, we solve this equation and present a new approach to obtain the solution by means of the combined use of the Adomian Decomposition Method and the Laplace Transform (LADM). Besides, we compare the behaviour of the solutions obtained with the only exact solutions given in the literature through fractional calculus. Moreover, it is shown that the proposed method is direct, effective and can be used for many other nonlinear evolution equations in mathematical physics. 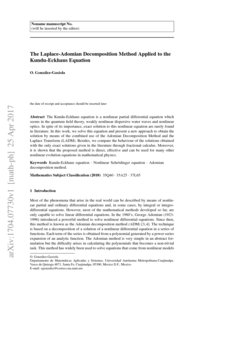 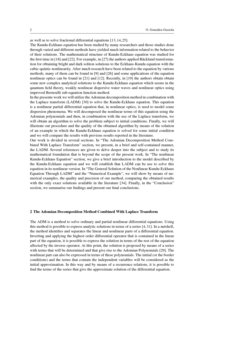 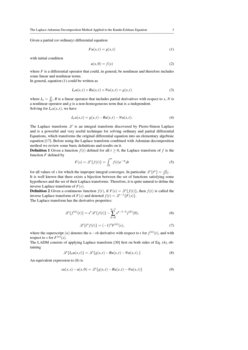 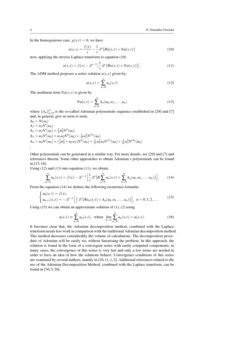 The paper shows how to optimize a water level sensor consisting of a cyl...
Slava Andrejev, et al. ∙

Specific solutions of the nonlinear Schrödinger equation, such as the Pe...
Leo Dostal, et al. ∙

On a nonlinear Schrödinger equation for nucleons in one space dimension

The modeling of many phenomena in various fields such as mathematics, ph...
Ahmed K. Al-Jaberi, et al. ∙

ADM-0 ; ADM-1 . The technique is based on a decomposition of a solution of a nonlinear differential equation in a series of functions. Each term of the series is obtained from a polynomial generated by a power series expansion of an analytic function. The Adomian method is very simple in an abstract formulation but the difficulty arises in calculating the polynomials that becomes a non-trivial task. This method has widely been used to solve equations that come from nonlinear models as well as to solve fractional differential equations Das-1 ; Das-2 ; Das-3 . The Kundu-Eckhaus equation has been studied by many researchers and those studies done through varied and different methods have yielded much information related to the behavior of their solutions. The mathematical structure of Kundu-Eckhaus equation was studied for the first time in Eck and Kundu . For example, in Wang the authors applied Bäcklund transformation for obtaining bright and dark soliton solutions to the Eckhaus-Kundu equation with the cubic-quintic nonlinearity. After much research have been related to the equation by various methods, many of them can be found in Bek and Tag and some applications of the equation nonlinear optics can be found in Kod and Cla . Recently, in Haci the authors obtain obtain some new complex analytical solutions to the Kundu-Eckhaus equation which seems in the quantum field theory, weakly nonlinear dispersive water waves and nonlinear optics using improved Bernoulli sub-equation function method. In the presente work we will utilize the Adomian decomposition method in combination with the Laplace transform (LADM) Waz-Lap to solve the Kundu-Eckhaus equation. This equation is a nonlinear partial differential equation that, in nonlinear optics, is used to model some dispersion phenomena. We will decomposed the nonlinear terms of this equation using the Adomian polynomials and then, in combination with the use of the Laplace transform, we will obtain an algorithm to solve the problem subject to initial conditions. Finally, we will illustrate our procedure and the quality of the obtained algorithm by means of the solution of an example in which the Kundu-Eckhaus equation is solved for some initial condition and we will compare the results with previous results reported in the literature. Our work is divided in several sections. In “The Adomian Decomposition Method Combined With Laplace Transform” section, we present, in a brief and self-contained manner, the LADM. Several references are given to delve deeper into the subject and to study its mathematical foundation that is beyond the scope of the present work. In “The nonlinear Kundu-Eckhaus Equation” section, we give a brief introduction to the model described by the Kundu-Eckhaus equation and we will establish that LADM can be use to solve this equation in its nonlinear version. In “The General Solution of the Nonlinear Kundu-Eckhaus Equation Through LADM” and the “Numerical Example”, we will show by means of numerical examples, the quality and precision of our method, comparing the obtained results with the only exact solutions available in the literature Arzu . Finally, in the “Conclusion” section, we summarise our findings and present our final conclusions.

where F is a differential operator that could, in general, be nonlinear and therefore includes some linear and nonlinear terms. In general, equation (1) could be written as

where Lt=∂∂t, R is a linear operator that includes partial derivatives with respect to x, N is a nonlinear operator and g is a non-homogeneous term that is u-independent. Solving for Ltu(x,t), we have

where the superscript (n) denotes the n−th derivative with respect to t for f(n)(t), and with respect to s for F(n)(s). The LADM consists of applying Laplace transform Waz-Lap first on both sides of Eq. (4), obtaining

An equivalent expression to (8) is

The ADM method proposes a series solution u(x,t) given by,

The nonlinear term Nu(x,t) is given by

From the equation (14) we deduce the following recurrence formulas

It becomes clear that, the Adomian decomposition method, combined with the Laplace transform needs less work in comparison with the traditional Adomian decomposition method. This method decreases considerably the volume of calculations. The decomposition procedure of Adomian will be easily set, without linearising the problem. In this approach, the solution is found in the form of a convergent series with easily computed components; in many cases, the convergence of this series is very fast and only a few terms are needed in order to have an idea of how the solutions behave. Convergence conditions of this series are examined by several authors, mainly in Y1 ; Y2 ; Y3 ; Y4 . Additional references related to the use of the Adomian Decomposition Method, combined with the Laplace transform, can be found in Waz-Lap ; ADM-2 ; Khu .

In mathematical physics, the Kundu-Eckhaus equation is a nonlinear partial differential equations within the nonlinear Schrödinger class Eck ; Kundu :

In the equation (17) the dependent variable u(x,t) is a complex-valued function of two real variables x and t. The equation (17) is a basic model that describes optical soliton propagation in Kerr media Por . The complete integrability and multi-soliton solutions, breather solutions, and various types of rogue wave solutions associated with the Kundu-Eckhaus equation have been widely reported by many authors Ank ; Ban ; Per ; Por . Nevertheless, in optic fiber communications systems, one always has to increase the intensity of the incident light field to produce ultrashort (femtosecond) optical pulses Zha . In this case, the simple NLS equation is inadequate to accurately describe the phenomena, and higher-order nonlinear terms, such as third-order dispersion, self-steepening, and self-frequency shift, must be taken into account Waz-x ; Wang ; Wang-1 . Explicitly calculating the derivatives that appear in equation (17), we obtain

To make the description of the the problem complete, we will consider some initial condition

In the following section we will develop an algorithm using the method described in section 2 in order to solve the nonlinear Kundu-Eckhaus equation (18) without resort to any truncation or linearization.

while the nonlinear term is given by

Note that, the nonlinear term Nu=i[2(|u|2)x+|u|4]u can be split into three terms to facilitate calculations

from this, we will consider the decomposition of the nonlinear terms into Adomian polynomials as

then, the Adomian polynomials corresponding to the nonlinear part Nu=i[2(|u|2)x+|u|4]u are

Using the expressions obtained above for equation (18), we will illustrate, with two examples, the efectiveness of LADM to solve the nonlinear Kundu-Eckhaus equation.

Using Laplace Adomian decomposition method (LADM), we solve this Kundu-Eckhaus equation subject to the initial condition u(0,x)=f(x)=βeix. Here i is the imaginary unit and β∈R with β≠0. To use ADM, the equation (18) is decomposed in the operators (19) and (20).

With the above, we have