In this paper we consider the iteratively regularized Gauss-Newton method, where regularization is achieved by Ivanov regularization, i.e., by imposing a priori constraints on the solution. We propose an a posteriori choice of the regularization radius, based on an inexact Newton / discrepancy principle approach, prove convergence and convergence rates under a variational source condition as the noise level tends to zero, and provide an analysis of the discretization error. Our results are valid in general, possibly nonreflexive Banach spaces, including, e.g., L^∞ as a preimage space. The theoretical findings are illustrated by numerical experiments. 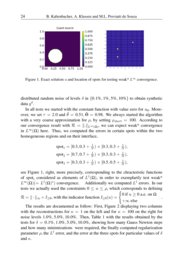 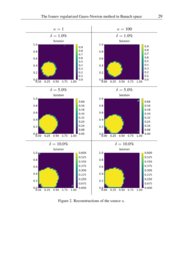 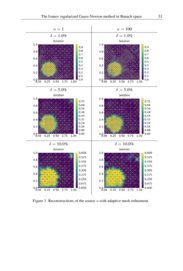 On Regularization via Frame Decompositions with Applications in Tomography

This paper is concerned with the recovery of (approximate) solutions to ...
Wolfgang Dahmen, et al. ∙

Throughout this paper we will assume that an exact solution u∗∈D(F) of (1) exists, i.e., F(u∗)=g, and that the deterministic noise level δ

Ivanov regularization, i.e., the option of using a prior bounds for regularizing ill-posed problem has been known for a long time already, partly also as method of quasi solutions [5, 16, 17, 18, 32] and has been revisited and further analyzed recently [4, 22, 26, 29].

Here, we are particularly interested in the IRGN-Ivanov method, i.e., we define Newton type iterates uδk+1 in an Ivanov regularized way as

with stopping index k∗=k∗(δ,gδ) according to the discrepancy principle

for τ>1 chosen sufficiently large independently of δ. (This includes the theoretical value k∗=∞ in case the set over which the minimum is taken is empty, which we will anyway exclude later on, though). Regularization is defined by a proper and convex functional R. The example

with some norm defined on D(F), some p>1 and some a priori guess u0 is frequently used in practice and will also be focused on in some of our results (e.g., Proposition 2 below). In case of R being defined by the L∞ norm, the inequality in (3) becomes a pointwise bound constraint and efficient methods for such mimimization problems can be employed, cf., e.g., [4, 20] in the context of ill-posed problems. Since sums of convex functions are again convex, R may be composed as a sum of different terms. For instance, additional a priori information on u might be incorporated in a strict sense by adding in R the indicator function of some convex set C.

The method (3), (4) has already been considered in [24], with a choice of the regularization radii ρk that refers to the value of the regularization functional at the exact solution, more precisely, ρk≡ρ≥R(u∗). Since this information might not be available in some practical applications, we here propose a special choice of ρk that does not require the knowledge of R(u∗). Instead, for fixed 0<θ<Θ<1 and k≤k∗, the regularization parameter ρ=ρk is chosen in an a posteriori fashion according to the inexact Newton type rule

(see also [10, 30] in the context of the Levenberg-Marquardt method in Hilbert spaces) provided

In this case we set uδk+1:=uδk+1(ρk). We will show that (7) is in fact always satisfied. As compared to [24], where ρk≥R(u∗), we will here prove that the reguarization radius chosen according to (6) satisfies ρk≤R(u∗), cf. (11), which implies that the regularization acts in a more restrictive, hence stronger stabilizing way.

We point out that the proof of well-definedness of the regularization radius will strongly rely on recent results from [4]. Moreover, we emphasize the fact that due to the non-additive structure of regularization here, the analysis done so far (e.g. [1, 23, 31]) does not apply here. For the same reason, we also did not find a possibility to extend the Levenberg-Marquardt method (e.g., [10, 19]) to the Ivanov regularized setting.

The remainder of this paper is organized as follows. In Section 2 we provide a convergence analysis in the sense of a regularization method, along with rates under variational source conditions, which is carried over to the discretized setting under certain accuracy requirements in Section 3. Section 4 is devoted to implementation details and numerical experiments. The final Section 5 contains a summary and an outlook.

For analyzing convergence of this method, we impose the following conditions Assume that a solution u† of (1) exists such that R:=R(u†)<∞. Moroever, let topologies TU on U and TY on Y exist such that

In case of the regularization functional being defined by the norm on the space U (5), compactness of sublevel sets typically holds in the sense of weak or weak* sequential compactness (if U is reflexive or the dual of a separable space, respectively) provided D(F) is closed with respect to this topology as well. For example, U may be a Lebesgue Lp(Ω) or Sobolev spaces Ws,p(Ω) with summability index p∈(1,∞], the space of regular Radon measures M(Ω)=Cb(Ω)∗, or the space of functions with bounded total variation BV(Ω) for some domain Ω. Thus, the topologies TU, TY will typically be weak or weak* topologies, or possibly also strong topologies arising from compact embeddings. Note that in general, we do not make explicit use of any norm on X here, but actually only use the TU from Assumption (2) and the structure induced by R bounded sets Br.

As a constraint on the nonlinearity of the forward operator F, we impose the tangential cone condition

for ctc<1/3. Here, BR is defined as in (8) and R=R(u†) as in Assumption 2. Also, F′(u)∈L(U,Y) is some linearization of F (not necessarily a Gâteaux or Fréchet derivative of F; the only requirements on F′ are (9) and F′(u)∈L(U,Y) for all u∈BR. In order to verify (9) in case R in the definition of BR is defined by a norm (5), one typically restricts the radius R (which basically determines the size of the constant ctc) to be small, which will usually be possible also here, assuming closeness of an exact solution u∗ to u0. In case R needs to be large, since R(u∗) is large, closeness of ¯u,u∈BR to each other can be enforced by considering R as the sum of some regularization functional and the indicator function of a sufficiently small neighborhood (possibly with respect to a different topology than the one used for regularization, and independent of the regularization radius) around u∗.

Moroever, we assume that the thresholds for the choice of ρk are chosen such that

The existence (i) of a minimizer uδk+1(ρ) of (3) for fixed k, uδk, gδ and ρ follows by the direct method of calculus of variations (note that the setting differs from the one in [24] in that we do not assume admissibility of u∗ here): The cost functional

which implies that ¯u is a minimizer of (3).

Thus, using continuity of the distance mapping ρ↦d(ρ,g) for ρ∈[0,R(x∗)], see [4], together with the Intermediate Value Theorem, we have existence of

Thus, (11) holds and therefore the iterates remain in BR.

The residuals can be estimated as follows

hence the stopping index defined by (4) is indeed finite.

Now (iv) follows from (ii) by standard arguments and our assumption on TU-compactness of BR. In fact, let (δn)n∈N be an arbitrary sequence converging to zero. By (4) and the fact that 0≤R(uδnk∗(δn,gδn))<R, Assumption 1 yields existence of a TU-convergent subsequence (ul)l∈N:=(uδnlk∗(δnl,gδnl))l∈N with limit ¯u, satisfying R(¯u)≤liminfl→∞R(ul). Using (2) and (4), we have existence of a (not relabeled) subsequence F(ul) with TY limit y, which by Assumption 2 (c) coincides with F(¯u), hence

In case of uniqueness, convergence of the whole sequence follows by a subsequence-subsequence argument. ∎

While Theorem 2 only gives weak (i.e., TU-subsequential) convergence for general regularization functionals, more can be said in the special but practically relevant case that R is defined by a norm.

Under the assumptions of Theorem 2, with R defined by a norm (5), we have, for uδk∗(δ,gδ) defined by Algorithm 1, that

Hence, if R is defined as the norm in a Kadets-Klee space, and TU is the corresponding weak topology, we even have (subsequential) norm convergence in place of TU convergence of uδk∗(δ,gδ) to an R minimizing solution. A Kadets-Klee (also called Radon-Riesz) space is a normed space in which, for any sequence (xn)n∈N, convergence of the norms ∥xn∥→∥x∥ and weak convergence xn⇀x implies strong convergence ∥xn−x∥→0.

If there exists a subsequence δl→0 such that for all l∈N, the iteration is already stopped at k=0, we have

This implies trivial convergence of the subsequence to R∗ in this case.

and by Assumption 2, there exists a solution u∗=u† such that the right hand side is finite. Thus, again by Assumption 2, (u(m))m∈N has a TU convergent subsequence (u(mn))n∈N with limit ~u, which, by TU closedness of F and (4), solves (1). On the other hand, from TU lower semicontinuity of R we conclude

This together with (22) implies

for some index function ϕ:R+⟶R+ (i.e., ϕ monotonically increasing and limt→0ϕ(t)=0), which we assume to be nonempty for this purpose.

Under the assumptions of Theorem 2 and the variational source condition (24), uδk∗(δ,gδ) satisfies the convergence rate

We now consider a discretized version for the actual numerical solution of (3) arising from restriction of the minimization to finite dimensional subspaces Xkh containing u0 and leading to discretized iterates uδk,h and an approximate version Fkh of the forward operator:

with stopping index k∗=k∗(δ,gδ) according to the discretized discrepancy principle

for τ>1+ctc1−3ctc. Here the sub- and superscripts h and k indicate that Fkh and Fkh′ are discrete approximations of F and F′, respectively, obtianed, e.g., by finite element discretizations on computational grids that my differ from step to step. In particular, they may be coarse at the beginning of the Newton iteration and emerge by successive mesh refinement during the iteration. Note that Fkh′ is not necessarily the derivative of Fkh.

The regularization parameter ρ=ρk,h is chosen according to the following discretized version of (6) (relying on actually computed quantities):

The tangential cone condition can usually not be expected to be transferrable from the continuous to the discretized setting, as already the simple setting of Fkh=PkhF, Fkh′=PkhF′ with a projection operator Pkh shows, since the right hand side ctc∥Fkh(¯uh)−Fkh(uh)∥=ctc∥Pkh(F(¯uh)−F(uh))∥ will usually be too weak to estimate the (projected) first order Taylor remainder. This can also be seen from the fact that the adjoint range invariance condition F′(¯u)=R¯uuF′(u) (with some bounded linear operator R¯uu close to the identity), that is often used to verify the tangential cone condition, does not imply its projected version PkhF′(¯uh)=~R¯uhuhPkhF′(uh). Thus, in order to be able to employ the continuous version (9), we also define the auxiliary continuous iterates (for an illustration, see [21, Figure 1]):

and the parameter ρ=ρk,a is given by

As we will show now, this still allows to prove closeness to some projection Pkhx∗ (e.g., a metric one) of an exact solution x∗ onto the finite dimensional space Xkh, provided certain accuracy requirements are met. Note that also in Pkh, the discretization level may depend on k and will typically get finer for increasing k in order to enable convergence in the sense of condition (45) below.

for any solution u∗∈BR of (1) hold with