The Inverse Weighted Lindley Distribution: Properties, Estimation and an Application on a Failure Time Data

In this paper a new distribution is proposed. This new model provides more flexibility to modeling data with upside-down bathtub hazard rate function. A significant account of mathematical properties of the new distribution is presented. The maximum likelihood estimators for the parameters in the presence of complete and censored data are presented. Two corrective approaches are considered to derive modified estimators that are bias-free to second order. A numerical simulation is carried out to examine the efficiency of the bias correction. Finally, an application using a real data set is presented in order to illustrate our proposed distribution. 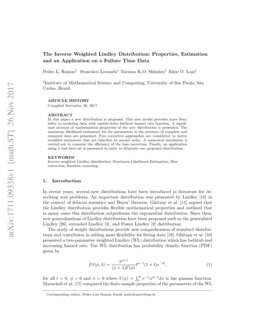 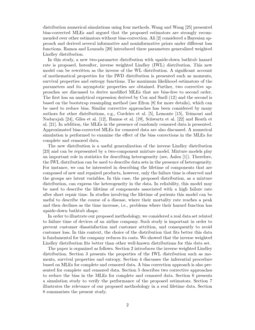 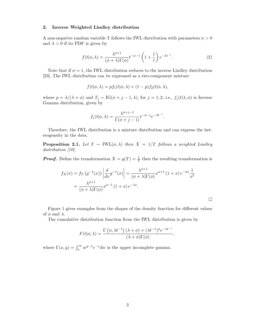 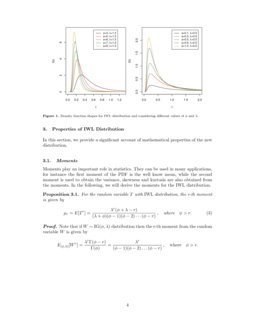 A generalization of Ramos-Louzada distribution: Properties and estimation

In engineering systems, it is usually assumed that lifetimes of componen...
M. Doostparast, et al. ∙

Off-Policy Evaluation via the Regularized Lagrangian

Extropy was introduced as a dual complement of the Shannon entropy. In t...
Suchandan Kayal, et al. ∙

In this work, we propose two methods, a Bayesian and a maximum likelihoo...
Agatha Rodrigues, et al. ∙

In recent years, several new distributions have been introduced in literature for describing real problems. An important distribution was presented by Lindley [16]

in the context of fiducial statistics and Bayes’ theorem. Ghitany et al.

presented a two-parameter weighted Lindley (WL) distribution which has bathtub and increasing hazard rate. The WL distribution has probability density function (PDF) given by

for all t>0, ϕ>0 and λ>0 where Γ(ϕ)=∫∞0e−xxϕ−1dx is the gamma function. Mazucheli et al. [17] compared the finite sample properties of the parameters of the WL distribution numerical simulations using four methods. Wang and Wang [25] presented bias-corrected MLEs and argued that the proposed estimators are strongly recommended over other estimators without bias-correction. Ali [2]

In this study, a new two-parameter distribution with upside-down bathtub hazard rate is proposed, hereafter, inverse weighted Lindley (IWL) distribution. This new model can be rewritten as the inverse of the WL distribution. A significant account of mathematical properties for the IWD distribution is presented such as moments, survival properties and entropy functions. The maximum likelihood estimators of the parameters and its asymptotic properties are obtained. Further, two corrective approaches are discussed to derive modified MLEs that are bias-free to second order. The first has an analytical expression derived by Cox and Snell (

12) and the second is based on the bootstrap resampling method (see Efron [8] for more details), which can be used to reduce bias. Similar corrective approaches has been considered by many authors for other distributions, e.g., Cordeiro et al. [5], Lemonte [15], Teimouri and Nadarajah [24], Giles et al. [12], Ramos et al. [19], Schwartz et al. [22] and Reath et al. [21]. In addition, the MLEs in the presence of randomly censored data is presented. Approximated bias-corrected MLEs for censored data are also discussed. A numerical simulation is performed to examine the effect of the bias corrections in the MLEs for complete and censored data.

The new distribution is a useful generalization of the inverse Lindley distribution [23] and can be represented by a two-component mixture model. Mixture models play an important role in statistics for describing heterogeneity (see, Aalen [1]). Therefore, the IWL distribution can be used to describe data sets in the presence of heterogeneity. For instance, we can be interested in describing the lifetime of components that are composed of new and repaired products, however, only the failure time is observed and the groups are latent variables. In this case, the proposed distribution, as a mixture distribution, can express the heterogeneity in the data. In reliability, this model may be used to describe the lifetime of components associated with a high failure rate after short repair time. In studies involving the lifetime of patients this model can be useful to describe the course of a disease, where their mortality rate reaches a peak and then declines as the time increase, i.e., problems where their hazard function has upside-down bathtub shape.

In order to illustrate our proposed methodology, we considered a real data set related to failure time of devices of an airline company. Such study is important in order to prevent customer dissatisfaction and customer attrition, and consequently to avoid customer loss. In this context, the choice of the distribution that fits better this data is fundamental for the company reduces its costs. We showed that the inverse weighted Lindley distribution fits better than other well-known distributions for this data set.

is Inverse Gamma distribution, given by

Figure 1 gives examples from the shapes of the density function for different values of ϕ and λ.

where Γ(x,y)=∫∞xwy−1e−xdw is the upper incomplete gamma.

In this section, we provide a significant account of mathematical properties of the new distribution.

Moments play an important role in statistics. They can be used in many applications, for instance the first moment of the PDF is the well know mean, while the second moment is used to obtain the variance, skewness and kurtosis are also obtained from the moments. In the following, we will derive the moments for the IWL distribution.

For the random variable T with IWL distribution, the r-th moment is given by

Note that if W∼IG(ϕ,λ) distribution then the r-th moment from the random variable W is given by

Since the IWL distribution can be expressed as a two-component mixture, we have

The result follows directly from the proposition 3.1.∎

A random variable T with IWL distribution, has the mean and variance given by

From (3) and considering r=1, it follows that μ1=μ. The second result follows from (4) considering r=2 and with some algebraic operation the proof is completed. ∎

Survival analysis has become a popular branch of statistics with wide range of applications. Although many functions related to survival analysis can be derived for this model, in this section we will present the most common functions. The survival function of IWL distribution representing the probability of an observation does not fail until a specified time t is given by

where γ(y,x)=∫x0wy−1e−wdw is the lower incomplete gamma function. The hazard function of T is given by

This model has upside-down bathtub hazard rate. The following Lemma is useful to prove such result.

The hazard function (5) is upside-down bathtub for all ϕ>0 and λ>0.

For IWL distribution we have

This properties make the IWL distribution an useful model for reliability data. Figure 2 gives examples of different shapes for the hazard function.

The mean residual life function r(t|ϕ,λ) of the IWL distribution is given by

Note that, for the Inverse Gamma distribution we have that

and after some algebraic manipulations, the proof is completed. ∎

In information theory, entropy has played a central role as a measure of the uncertainty associated with a random variable. Shannon’s entropy is one of the most important metrics in information theory. The Shannon’s Entropy from IWL distribution is given by solving the following equation

A random variable T with IWL distribution, has the Shannon’s Entropy given by

From the equation (6) we have

In this section, we present the maximum likelihood estimator of the parameters ϕ and λ of the IWL distribution. Additionally, MLEs considering randomly censored data are also discussed.

The log-likelihood function l(θ;t)=logL(θ;t) is given by

From the expressions ∂∂ϕl(θ;t)=0, ∂∂λl(θ;t)=0, we get the likelihood equations

where ψ(k)=∂∂klogΓ(k)=Γ′(k)Γ(k) is the digamma function. After some algebraic manipulation the solution of λMLE is given by

These results are a simple modification of the results obtained for Ghitany et al. [11]

where the elements of the Fisher information matrix I(ϕ,λ) are given by

and ψ′(k)=∂∂2klogΓ(k) is the trigamma function. An interesting property of the IWL distribution is that the observed matrix information is equal to the expected information matrix.

In survival analysis and industrial lifetime testing, random censoring schemes have been received special attention. Suppose that the ith individual has a lifetime Ti and a censoring time Ci, moreover the random censoring times Cis are independent of Tis and their distribution does not depend on the parameters, then the data set is (ti,δi), where ti=min(Ti,Ci) and δi=I(Ti≤Ci). This type of censoring have as special case the type I and II censoring mechanism. The likelihood function for θ is given by

Let T1,⋯,Tn be a random sample of IWL distribution, the likelihood function considering data with random censoring is given by

The logarithm of the likelihood function (9) is given by

From ∂l(λ,ϕ|t)/∂λ=0 and ∂l(λ,ϕ|t)/∂ϕ=0, the likelihood equations are given as follows

where Ψ(k,x)=∂γ(k,x)/∂k can be computed numerically. Numerical methods are required in order to find the solution of these non-linear equations.

In this section, we discuss modified MLEs based on two corrective approaches that are bias-free to second order. Firstly a corrective analytical approach is presented than the bootstrap resampling method is presented.

Consider the likelihood function L(θ;t) with a p

θ. Thus, the joint cumulants of the derivatives of l(θ;t) can be written by

Consequently, the derivatives of such cumulants are given by

where sij is the (i,j)-th element of the inverse of Fisher’s information matrix of ^θ, K={−hij}. Cordeiro and Klein [6] proved that even if the data are dependent the expression (12) can be re-written as

A bias corrected MLE for ^θ is obtained as

where ^θ is the MLE of the parameter θ, ^K=K|θ=^θ and ^A=A|θ=^θ. The bias of ^θCMLE is unbiased O(n−2). For the IWL distribution the higher-order derivatives can be easily obtained since they do not involve t, thus, we have

and the elements of A(2) are

Finally, the bias-corrected maximum likelihood estimators are given by

A bias corrected approach can be considered for censored data. Although the Fisher information matrix related to the MLEs (9) does not present closed-form expressions, we can consider the bias corrected presented in (5.1). In this case, approximated bias-corrected maximum likelihood estimates (ACMLE) are archived by

is not an unbiased estimator with

Let y=(y1,…,yn)⊤ be a sample with n observations randomly selected from the random variable Y in which has the distribution function F=Fν(y). Thus, let the parameter ν be a function of F given by ν=t(F). Finally, let ^ν be an estimator of ν based on y, i.e., ^ν=s(y). The pseudo-samples y∗=(y∗1,…,y∗n)⊤ is obtained from the original sample y through resampling with replacement. The bootstrap replicates of ^ν is calculated, where ^ν∗=s(y∗) and the empirical cdf (ecdf) of ^ν∗ is used to estimate F^ν (cdf of ^ν). Let BF(^ν,ν) be the bias of the estimator ^ν=s(y) given by

Note that the subscript of the expectation F indicates that is taken with respect to F. The bootstrap estimators of the bias were obtained by replacing F with F^ν, where F generated the original sample. Therefore, the bootstrap bias estimate is given by

If we have B bootstrap samples (y∗(1),y∗(2),…,y∗(B)) which are generated independently from the original sample y and the respective bootstrap estimates (^ν∗(1),^ν∗(2),…,^ν∗(B)) are calculated, then it is achievable to determine the bootstrap expectations EF^ν[^ν∗] approximately by

Therefore, the bootstrap bias estimate based on B replications of ^ν is ^BF(^ν,ν)=^ν∗(.)−^ν, which results in the bias corrected estimators obtained through by bootstrap resampling method that is given by

In this section a simulation study is presented to compare the efficiency of the maximum likelihood method and the bias correction approaches in the presence of complete and censored data. The proposed comparisons are performed by computing the mean relative errors (MRE) and the relative mean square errors (RMSE) given by

where N is the number of estimates obtained through the MLE, CMLE and the bootstrap approach. The 95%

coverage probability of the asymptotic confidence intervals are also evaluated. Considering this approach, we expected that the most efficient estimation metho