The Importance of Being Recurrent for Modeling Hierarchical Structure

Recent work has shown that recurrent neural networks (RNNs) can implicitly capture and exploit hierarchical information when trained to solve common natural language processing tasks such as language modeling (Linzen et al., 2016) and neural machine translation (Shi et al., 2016). In contrast, the ability to model structured data with non-recurrent neural networks has received little attention despite their success in many NLP tasks (Gehring et al., 2017; Vaswani et al., 2017). In this work, we compare the two architectures---recurrent versus non-recurrent---with respect to their ability to model hierarchical structure and find that recurrency is indeed important for this purpose. 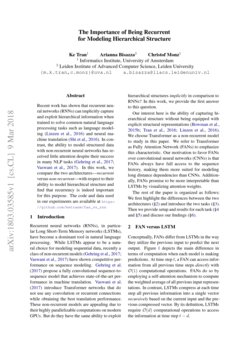 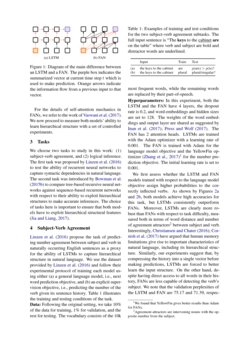 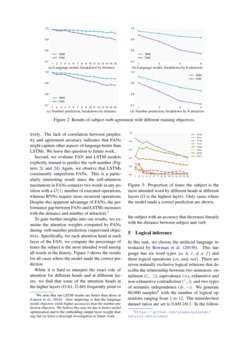 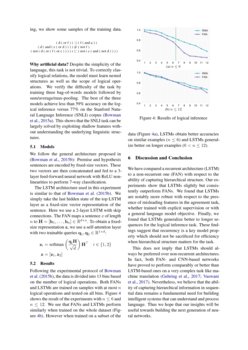 Finding the Answers with Definition Models

Exploring the Naturalness of Buggy Code with Recurrent Neural Networks

Statistical language models are powerful tools which have been used for ...
Jack Lanchantin, et al. ∙

In this paper, we focus on the problem of answer triggering ad-dressed b...
Wei Li, et al. ∙

introduce Transformer networks that do not use any convolution or recurrent connections while obtaining the best translation performance. These non-recurrent models are appealing due to their highly parallelizable computations on modern GPUs. But do they have the same ability to exploit hierarchical structures

implicitly in comparison to RNNs? In this work, we provide a first answer to this question.

. We choose Transformer as a non-recurrent model to study in this paper. We refer to Transformer as Fully Attentional Network (FAN) to emphasize this characteristic. Our motivation to favor FANs over convolutional neural networks (CNNs) is that FANs always have full access to the sequence history, making them more suited for modeling long distance dependencies than CNNs. Additionally, FANs promise to be more interpretable than LSTMs by visualizing attention weights.

The rest of the paper is organized as follows: We first highlight the differences between the two architectures (§2) and introduce the two tasks (§3). Then we provide setup and results for each task (§4 and §5) and discuss our findings (§6).

Conceptually, FANs differ from LSTMs in the way they utilize the previous input to predict the next output. Figure 1 depicts the main difference in terms of computation when each model is making predictions. At time step t, a FAN can access information from all previous time steps directly with O(1)

computational operations. FANs do so by employing a self-attention mechanism to compute the weighted average of all previous input representations. In contrast, LSTMs compress at each time step all previous information into a single vector

recursively based on the current input and the previous compressed vector. By their definition, LSTMs require O(d) computational operations to access the information at time step t−d.

For the details of self-attention mechanics in FANs, we refer to the work of Vaswani et al. (2017). We now proceed to measure both models’ ability to learn hierarchical structure with a set of controlled experiments.

We choose two tasks to study in this work: (1) subject-verb agreement, and (2) logical inference. The first task was proposed by Linzen et al. (2016) to test the ability of recurrent neural networks to capture syntactic dependencies in natural language. The second task was introduced by Bowman et al. (2015b) to compare tree-based recursive neural networks against sequence-based recurrent networks with respect to their ability to exploit hierarchical structures to make accurate inferences. The choice of tasks here is important to ensure that both models have to exploit hierarchical structural features (Jia and Liang, 2017).

Linzen et al. (2016) propose the task of predicting number agreement between subject and verb in naturally occurring English sentences as a proxy for the ability of LSTMs to capture hierarchical structure in natural language. We use the dataset provided by Linzen et al. (2016) and follow their experimental protocol of training each model using either (a) a general language model, i.e., next word prediction objective, and (b) an explicit supervision objective, i.e., predicting the number of the verb given its sentence history. Table 1 illustrates the training and testing conditions of the task.

Data: Following the original setting, we take 10% of the data for training, 1% for validation, and the rest for testing. The vocabulary consists of the 10k most frequent words, while the remaining words are replaced by their part-of-speech.

To allow for a fair comparison, we find the best configuration for each model by running a grid search over the following hyperparameters: number of layers in

We first assess whether the LSTM and FAN models trained with respect to the language model objective assign higher probabilities to the correctly inflected verbs. As shown in

Figures 1(b) and 1(a), both models achieve high accuracies for this task, but LSTMs consistently outperform FANs. Moreover, LSTMs are clearly more robust than FANs with respect to task difficulty, measured both in terms of word distance and number of agreement attractors111Agreement attractors are intervening nouns with the opposite number from the subject. between subject and verb. Christiansen and Chater (2016); Cornish et al. (2017) have argued that human memory limitations give rise to important characteristics of natural language, including its hierarchical structure. Similarly, our experiments suggest that, by compressing the history into a single vector before making predictions, LSTMs are forced to better learn the input structure. On the other hand, despite having direct access to all words in their history, FANs are less capable of detecting the verb’s subject. We note that the validation perplexities of the LSTM and FAN are 67.06 and 69.14, respectively.

Secondly, we evaluate FAN and LSTM models explicitly trained to predict the verb number (Figures 1(d) and 1(c)). Again, we observe that LSTMs consistently outperform FANs. This is a particularly interesting result since the self-attention mechanism in FANs connects two words in any position with a O(1) number of executed operations, whereas RNNs require more recurrent operations. Despite this apparent advantage of FANs, the performance gap between FANs and LSTMs increases with the distance and number of attractors.222We note that our LSTM results are better than those in Linzen et al. (2016). Also surprising is that the language model objective yields higher accuracies than the number prediction objective. We believe this may be due to better model optimization and to the embedding-output layer weight sharing, but we leave a thorough investigation to future work.

To gain further insights into our results, we examine the attention weights computed by FANs during verb-number prediction (supervised objective). Specifically, for each attention head at each layer of the FAN, we compute the percentage of times the subject is the most attended word among all words in the history. Figure 3 shows the results for all cases where the model made the correct prediction. While it is hard to interpret the exact role of attention for different heads and at different layers, we find that some of the attention heads at the higher layers (ℓ2 h1, ℓ3 h0) frequently point to the subject with an accuracy that decreases linearly with the distance between subject and verb.

In this task, we choose the artificial language introduced by Bowman et al. (2015b). The vocabulary of this language includes six word types {a, b, c, d, e, f} and three logical operators {or, and, not}. The task consists of predicting one of seven mutually exclusive logical relations that describe the relationship between a pair of sentences: entailment (⊏, ⊐), equivalence (≡), exhaustive and non-exhaustive contradiction (∧, |), and two types of semantic independence (#, ⌣). We generate 60,000 samples333https://github.com/sleepinyourhat/vector-entailment with the number of logical operations ranging from 1 to 12. The train/dev/test dataset ratios are set to 0.8/0.1/0.1. Here are some samples of the training data:

Despite the simplicity of the language, this task is not trivial. To correctly classify logical relations, the model must learn nested structures as well as the scope of logical operators. We verify the difficulty of the task by training three bag-of-words models followed by sum/average/max-pooling. The best of the three models achieve less than 59% accuracy on the logical inference versus 77% on the Stanford Natural Language Inference (SNLI) corpus

(Bowman et al., 2015a). This shows that the SNLI task can be largely solved by exploiting shallow features without understanding the underlying linguistic structures, which has also been pointed out by recent work (Glockner et al., 2018; Gururangan et al., 2018).

Concurrently to our work Evans et al. (2018) proposed an alternative data set for logical inference and also found that a FAN model underperformed various other architectures including LSTMs.

We follow the general architecture proposed in Bowman et al. (2015b)

: Premise and hypothesis sentences are encoded by fixed-size vectors. These two vectors are then concatenated and fed to a 3-layer feed-forward neural network with ReLU nonlinearities to perform 7-way classification of the logical relation.

The LSTM architecture used in this experiment is similar to that of Bowman et al. (2015b). We simply take the last hidden state of the top LSTM layer as a fixed-size vector representation of the sentence. Here, we use a 2-layer LSTM with skip connections. The FAN maps a sentence x of length n to . To obtain a fixed-size representation z, we use a self-attention layer with two trainable queries q1,q2∈R1×d:

We find the best hyperparameters for each model by running a grid search as explained in §4.

Following the experimental protocol of Bowman et al. (2015b), the data is divided into 13 bins based on the number of logical operators. Both FANs and LSTMs are trained on samples with at most n logical operators and tested on all bins. Figure 4 shows the result of the experiments with n≤6 and n≤12. We see that FANs and LSTMs perform similarly when trained on the whole dataset (Figure 3(a)). However when trained on a subset of the data (Figure 3(b)), LSTMs obtain better accuracies on similar examples (n≤6) and generalize better on longer examples (6<n≤12).

We have compared a recurrent architecture (LSTM) to a non-recurrent one (FAN) with respect to the ability of capturing the underlying hierarchical structure of sequential data. Our experiments show that LSTMs slightly but consistently outperform FANs. We found that LSTMs are notably more robust with respect to the presence of misleading features in the agreement task, whether trained with explicit supervision or with a general language model objective. Secondly, we found that LSTMs generalize better than FANs to longer sequences in a logical inference task. These findings suggest that recurrency is a key model property which should not be sacrificed for efficiency when hierarchical structure matters for the task.

This does not imply that LSTMs should always be preferred over non-recurrent architectures. In fact, both FAN- and CNN-based networks have proved to perform comparably or better than LSTM-based ones on a very complex task like machine translation Gehring et al. (2017); Vaswani et al. (2017). Nevertheless, we believe that the ability of capturing hierarchical information in sequential data remains a fundamental need for building intelligent systems that can understand and process language. Thus we hope that our insights will be useful towards building the next generation of neural networks.