The impact of Entropy and Solution Density on selected SAT heuristics

In a recent article [Oh'15], Oh examined the impact of various key heuristics (e.g., deletion strategy, restart policy, decay factor, database reduction) in competitive SAT solvers. His key findings are that their expected success depends on whether the input formula is satisfiable or not. To further investigate these findings, we focused on two properties of satisfiable formulas: the entropy of the formula, which approximates the freedom we have in assigning the variables, and the solution density, which is the number of solutions divided by the search space. We found that both predict better the effect of these heuristics, and that satisfiable formulas with small entropy `behave' similarly to unsatisfiable formulas. 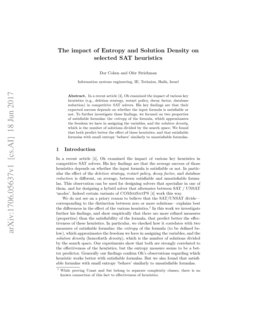 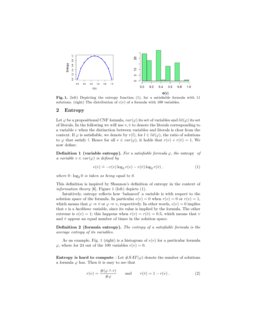 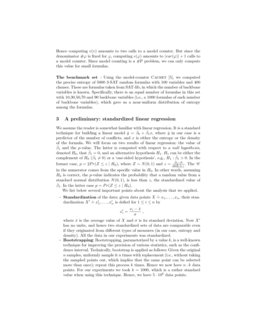 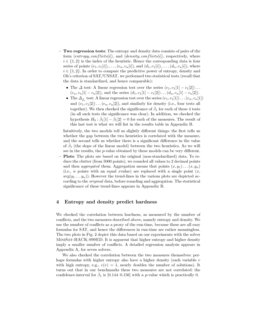 In a recent article [4], Oh examined the impact of various key heuristics in competitive SAT solvers. His key findings are that the average success of those heuristics depends on whether the input formula is satisfiable or not. In particular the effect of the deletion strategy, restart policy, decay factor, and database reduction is different, on average, between satisfiable and unsatisfiable formulas. This observation can be used for designing solvers that specialize in one of them, and for designing a hybrid solver that alternates between SAT / UNSAT ‘modes’. Indeed certain variants of COMiniSatPS [4] work this way.

We do not see an a priory reason to believe that the SAT/UNSAT divide—corresponding to the distinction between zero or more solutions—explains best the differences in the effect of the various heuristics.111While proving Unsat and Sat belong to separate complexity classes, there is no known connection of this fact to effectiveness of heuristics. In this work we investigate further his findings, and show empirically that there are more refined measures (properties) than the satisfiability of the formula, that predict better the effectiveness of these heuristics. In particular, we checked how it correlates with two measures of satisfiable formulas: the entropy of the formula (to be defined below), which approximates the freedom we have in assigning the variables, and the solution density (henceforth density), which is the number of solutions divided by the search space. Our experiments show that both are strongly correlated to the effectiveness of the heuristics, but the entropy measure seems to be a better predictor. Generally our findings confirm Oh’s observations regarding which heuristic works better with satisfiable formulas. But we also found that satisfiable formulas with small entropy ‘behave’ similarly to unsatisfiable formulas.

Let φ be a propositional CNF formula, var(φ) its set of variables and lit(φ) its set of literals. In the following we will use v,¯v to denote the literals corresponding to a variable v when the distinction between variables and literals is clear from the context. If φ is satisfiable, we denote by r(l), for l∈lit(φ), the ratio of solutions to φ that satisfy l. Hence for all v∈var(φ), it holds that r(v)+r(¯v)=1. We now define:

For a satisfiable formula φ, the entropy of a variable v∈var(φ) is defined by

This definition is inspired by Shannon’s definition of entropy in the context of information theory [6]. Figure 1 (left) depicts (1).

Intuitively, entropy reflects how ‘balanced’ a variable is with respect to the solution space of the formula. In particular e(v)=0 when r(v)=0 or r(v)=1, which means that φ⇒¯v or φ⇒v, respectively. In other words, e(v)=0 implies that v is a backbone variable, since its value is implied by the formula. The other extreme is e(v)=1; this happens when r(v)=r(¯v)=0.5, which means that v and ¯v appear an equal number of times in the solution space.

: Let #SAT(φ) denote the number of solutions a formula φ has. Then it is easy to see that

We assume the reader is somewhat familiar with linear regression. It is a standard technique for building a linear model

We list below several important points about the analysis that we applied.

We checked the correlation between hardness, as measured by the number of conflicts, and the two measures described above, namely entropy and density. We use the number of conflicts as a proxy of the run-time, because these are all easy formulas for SAT, and hence the differences in run-time are rather meaningless. The two plots in Fig. 2 depict this data based on our experiments with the solver MiniSat-HACK-999ED

. It is apparent that higher entropy and higher density imply a smaller number of conflicts. A detailed regression analysis appears in Appendix

We also checked the correlation between the two measures themselves: perhaps formulas with higher entropy also have a higher density (each variable v with high entropy, e.g., e(v)=1, nearly doubles the number of solutions). It turns out that in our benchmarks these two measures are not correlated: the confidence-interval for ^β1 is [0.144–0.156] with a p-value which is practically 0.

In this section we describe each of the experiments of Oh [4], and our own version of the experiment based on entropy and density, when applied to the benchmarks mentioned above. We omit the details of one experiment, in which Oh examined the effect of canceling database reduction, the reason being that this heuristic is only activated after 2000 conflicts, and most of our benchmarks are solved before that point.222Our attempt to use an approximate model-counter with larger formulas failed: the inaccuracies were large enough to make the analysis show results that are senseless. Raw data as well as charts and regression analysis of our full set of experiments can be found online in [1].

1. Deletion strategy: Different solvers use different criteria for selecting the learned clauses for deletion. It was shown in [4] that for SAT instances learned clauses with low Literal Block Distance (LBD) [2] value can help, whereas others have no apparent effect. In one of the experiments, whose results are copied here at the top part of Fig. 3, Oh compared the criterion of ‘core LBD-cut’333An LBD-cut is the lowest value of LBD a learned clause had so far, assuming this value is recalculated periodically. 5 and clause size 12. In other words, either save (i.e., do not delete) clauses with an LBD-cut of 5 and lower, or clauses with size 12 or lower. It shows that for UNSAT instances the former is better, whereas the opposite conclusion is reached for the SAT instances. The results of our own experiments are depicted at the bottom of the figure. They show that the latter is indeed slightly better with our benchmarks (all satisfiable, recall). But what is more important, is that the difference becomes smaller with lower entropy—hence the decline of the trend-line (recall that the trend-lines are based on the raw data, whereas the diagram itself is computed after rounding and aggregation to improve visibility). Hence it is evident that formulas with small entropy ‘behave’ more similar to unsat formulas. The ascending trend-line in the right figure shows, surprisingly, an opposite effect of density.

2. Deletion with different LBD-cut value Related to the previous heuristic, in [4] it was found that deletion based on larger LBD-cut values, up to a point, improve the performance of the solver with unsat formulas, but not with SAT ones. Fig. 4 (top) is an excerpt from his results for various LBD-cut values. We repeated his experiment with LBD-cut 1 and LBD-cut 5. The plots show that lower values of entropy and (independently) lower values of density yield a bigger advantage to LBD-cut 5, which again demonstrates that satisfiable formulas with these values ‘behave’ similarly to unsat formulas.

3. Restarts policy: The Luby restart strategy [3] is based on a fixed sequence of time intervals, whereas the Glucose restarts are more rapid and dynamic. It initiates a restart when the solver identifies that learned clauses have higher LBD than average. According to the competitions’ results this is generally better in unsat instances. Oh confirmed the hypothesis that this is related to the restart strategy: indeed his results show that for satisfiable instances Luby restart is better.

Our own results can be seen in Fig. 5 and in Appendix 0.B. The fact that the gap in the number of conflicts between Luby and Glucose-style restarts is negative, implies that the former is generally better, which is consistent with Oh’s results for satisfiable formulas. Observe that the trend-line slightly declines with entropy (^β1=−15), which implies that Glucose restarts are slightly better with low entropy. So again we observe that low entropy formulas ‘behave’ more similar to UNSAT formulas than those that have high entropy. The table in Appendix 0.B shows that this result has a relatively high p-value. We speculate that with high-entropy instances, the solver hits more branches that can be extended to a solution, hence Glucose’s rapid restarts can be detrimental. Density seems to have an opposite effect, although again only with low statistical confidence.

4. The variable decay factor: The well-known VSIDS branching heuristic is based on an activity score of literals, which decay over time, hence giving higher priority to literals that appear in recently-learned clauses. In the solver MiniSat_HACK_999ED, there is a different decay factor for each of the two restart phases: this solver alternates between a Glucose-style (G) restart policy phase and a no-restart (NR) phase (these two phases correspond to good heuristics for SAT and UNSAT formulas, respectively). In [4] Oh compares different decay factors for each of these restart phases, on top of MiniSat_HACK_999ED. His results show that for UNSAT instances slower decay gives better performance, while for SAT instances it is unclear. His results appear at the top of Fig. 6. We experimented with the two extreme decay factors in that table: 0.95 and 0.6. Note that since our benchmarks are relatively easy, the solver never reaches the NR phase. The plot at the bottom of the figure shows the gap in the number of conflicts between these two values. A higher value means that with strong decay (0.6) the results are worse. We can see that the results are worse with strong decay when the entropy is low, which demonstrates again that the effect of the variable decay factor is similar for unsat formulas and satisfiable formulas with low entropy. A similar phenomenon happens with small density.

: We defined the entropy property of satisfiable formulas, and used it, together with solution density, to further investigate the results achieved by Oh in [4]. We showed that both are strongly correlated with the difficulty of solving the formula (as measured by the number of conflicts). Furthermore, we showed that they predict better the effect of various SAT heuristics than Oh’s sat/unsat divide, and that satisfiable formulas with small entropy ‘behave’ similarly to unsatisfiable formulas. Since both measures are hard to compute we do not expect these results to be applied directly (e.g., in a portfolio), but perhaps future research will find ways to cheaply approximate them. For example, a high backbone count (variables with a value at decision level 0) may be correlated to low entropy, because such variables contribute 0 to the formula’s entropy.

We thank Dr. David Azriel for his guidance regarding statistical techniques.

Denote by ^β1E and ^β1S the ^β1-value of the linear models for entropy vs. conflicts and density vs. conflicts, respectively. The table below shows strong correlation between both measures to the number of conflicts (the p-value in both cases, for all engines, is practically 0). The Last two columns show the gap ^β1E−^β1S and the corresponding p-value for H0:^β1E−^β1S=0,H1:^β1E−^β1S≠0, when measured across the k=1000 iterations of the bootstrap method that was described in Sec. 3. For engines with high p-value we cannot reject H0 with confidence.

The table below lists the confidence interval and corresponding p-value, for the two regression tests Δ and Δ^β1 (in the latter we also list the results for ^β0) that were explained in Sec. 3, and the four experiments described in Sec. 5. H1 is one-sided.