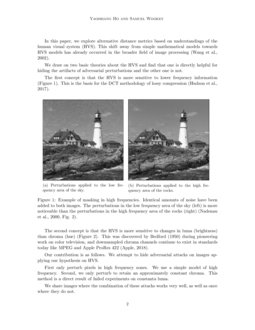 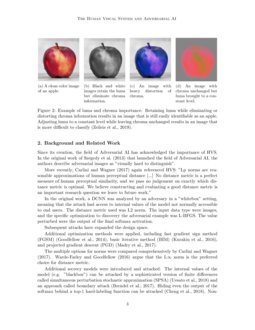 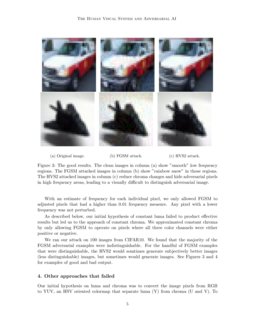 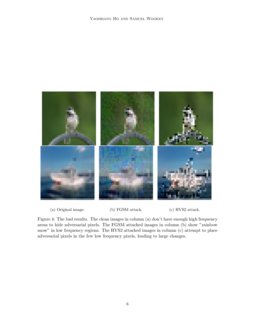 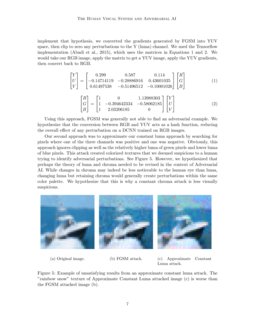 The tension between openness and prudence in AI research

With the extensive use of AI in various fields, the issue of AI security...
Junli Shen, et al. ∙

Can you fool AI with adversarial examples on a visual Turing test?

Although humans perform well at predicting what exists beyond the bounda...
Przemek Gardias, et al. ∙

Adversarial AI is a set of techniques to find a small change to an input that nevertheless changes its classification by a classifier. The initial research that launched the field focused on images as the input and deep convolutional neural networks (DCNN) as the classifier

The minimization of this change is often measured by L norms. An L0 norm counts the number of pixels changed. An L1 norm sums up the magnitude of the change over all pixels. An L2 norm is the square root of the sum of the squares of the changes. And the L∞ norm is the magnitude of the most changed pixel. Multiple figures that demonstrate the differences between adversarial images that use each of these norms can be found in (Carlini and Wagner, 2017).

In this paper, we explore alternative distance metrics based on understandings of the human visual system (HVS). This shift away from simple mathematical models towards HVS models has already occurred in the broader field of image processing (Wang et al., 2002).

We draw on two basic theories about the HVS and find that one is directly helpful for hiding the artifacts of adversarial perturbations and the other one is not.

The first concept is that the HVS is more sensitive to lower frequency information (Figure 1). This is the basis for the DCT methodology of lossy compression (Hudson et al., 2017).

The second concept is that the HVS is more sensitive to changes in luma (brightness) than chroma (hue) (Figure 2). This was discovered by Bedford (1950) during pioneering work on color television, and downsampled chroma channels continue to exist in standards today like MPEG and Apple ProRes 422 (Apple, 2018).

Our contribution is as follows. We attempt to hide adversarial attacks on images applying our hypothesis on HVS.

First only perturb pixels in high frequency zones. We use a simple model of high frequency. Second, we only perturb to retain an approximately constant chroma. This method is a direct result of failed experiments on constanta luma.

We share images where the combination of these attacks works very well, as well as once where they do not.

In the original work, a DCNN was analyzed by an adversary in a ”whitebox” setting, meaning that the attack had access to internal values of the model not normally accessible to end users. The distance metric used was L2 norm. The input data type were images, and the specific optimization to discovery the adversarial example was L-BFGS. The value perturbed were the output of the final softmax activation.

The multiple options for norms were compared comprehensively by Carlini and Wagner (2017). Warde-Farley and Goodfellow (2016) argue that the L∞ norm is the preferred choice for distance metric.

Additional secrecy models were introduced and attacked. The internal values of the model (e.g. ”blackbox”) can be attacked by a sophisticated version of finite differences called simultaneous perturbation stochastic approximation (SPSA) (Uesato et al., 2018) and an approach called boundary attack (Brendel et al., 2017). Hiding even the output of the softmax behind a top-1 hard-labeling function can be attacked (Cheng et al., 2018). Non-differentiable layers can be approximated by backward pass differentiable approximation (BPDA) (Athalye et al., 2018).

The classifier designs attacked expanded beyond DCNN to include RNNs, SVM, and even gradient boosted decision trees (Papernot et al., 2016b).

A series of defenses have been proposed, including defensive distillation

(Papernot and McDaniel, 2016). Nearly all have been defeated except the original approach proposed: adversarial retraining (Uesato et al., 2018).

We based our attacks on the FGSM method (Goodfellow et al., 2014) for its low computational requirements. We implemented FGSM ourselves, rather than modify the reference implementation in cleverhans, for ease of implementation (Papernot et al., 2016a).

Our final HSV2 attack combines masking and constant chroma. We attacked the generic DCNN architecture described in the Keras documentation.

With the vertical mean and horizontal mean in hand, we calculated the absolute value of the pixel channel’s deviation from each of these means. Then we took the min of those two deviations. This is our approximation of frequency for a pixel’s individual color channel.

For each pixel, we took the max of the three color channels. This is our approximation of frequency for a pixel. We reasoned that even if say the Red and Green deviations from mean were low, a large deviation in Blue would still cause the HVS to perceive high frequency.

With an estimate of frequency for each individual pixel, we only allowed FGSM to adjusted pixels that had a higher than 0.01 frequency measure. Any pixel with a lower frequency was not perturbed.

As described below, our initial hypothesis of constant luma failed to product effective results but led us to the approach of constant chroma. We approximated constant chroma by only allowing FGSM to operate on pixels where all three color channels were either positive or negative.

We ran our attack on 100 images from CIFAR10. We found that the majority of the FGSM adversarial examples were indistinguishable. For the handful of FGSM examples that were distinguishable, the HVS2 would somtimes generate subjectively better images (less distinguishable) images, but sometimes would generate images. See Figures 3 and 4 for examples of good and bad output.

4 Other approaches that failed

Our initial hypothesis on luma and chroma was to convert the image pixels from RGB to YUV, an HSV oriented colormap that separate luma (Y) from chroma (U and V). To implement that hypothesis, we converted the gradients generated by FGSM into YUV space, then clip to zero any perturbations to the Y (luma) channel. We used the Tensorflow implementation

Using this approach, FGSM was generally not able to find an adversarial example. We hypothesize that the conversion between RGB and YUV acts as a hash function, reducing the overall effect of any perturbation on a DCNN trained on RGB images.

Our second approach was to approximate our constant luma approach by searching for pixels where one of the three channels was positive and one was negative. Obviously, this approach ignores clipping as well as the relatively higher luma of green pixels and lower luma of blue pixels. This attack created colorized textures that we deemed suspicious to a human trying to identify adversarial perturbations. See Figure 5. However, we hypothesized that perhaps the theory of luma and chroma needed to be revised in the context of Adversarial AI. While changes in chroma may indeed be less noticeable to the human eye than luma, changing luma but retaining chroma would generally create perturbations within the same color palette. We hypothesize that this is why a constant chroma attack is less visually suspicious.

In this paper, we have modified adversarial AI attacks informed by HVS theories. To our knowledge, this is the first attempt to do so. We have found that simple approaches to mask adversarial perturbations can be effective at yielding images that are less detectable by the human visual system.

There are many directions for future work.

Existing models of the HVS will likely yield superior results (Nadenau et al., 2000). Even the common approach of DCT will likely outperform our simple measure of frequency (Hudson et al., 2017).

Because people are accustomed to JPEG compression artifacts, it may be possible to hide perturbations even in low frequency areas of images if boxed in by 8x8 pixel regions to simulate the artifacts of JPEG compression.

Finally, outside the field of Adversarial AI, the relatively importance of luma suggests a new design for convolutional neural networks, where the luma channel has relatively more hidden layers and more weights than the chroma channels. In an extreme model, chroma could be eliminated entirely to train a black and white only DCNN.

We would like to acknowledge support for this project from Tom Rikert, Chiara Cerini, David Wu, Bjorn Eriksson, and Israel Niezen.