The Hermitian Jacobi process: simplified formula for the moments and application to optical fibers MIMO channels

Using a change of basis in the algebra of symmetric functions, we compute the moments of the Hermitian Jacobi process. After a careful arrangement of the terms and the evaluation of the determinant of an `almost upper-triangular' matrix, we end up with a moment formula which is considerably simpler than the one derived in <cit.>. As an application, we propose the Hermitian Jacobi process as a dynamical model for optical fibers MIMO channels and compute its Shannon capacity for small enough power at the transmitter. Moreover, when the size of the Hermitian Jacobi process is larger than the moment order, our moment formula may be written as a linear combination of balanced terminating _4F_3-series evaluated at unit argument. 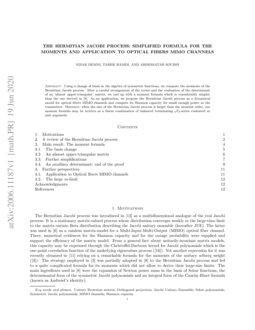 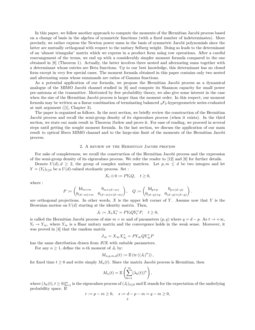 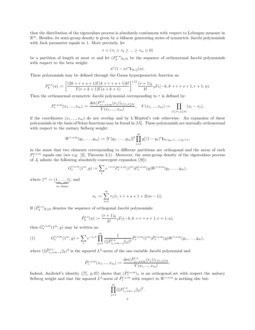 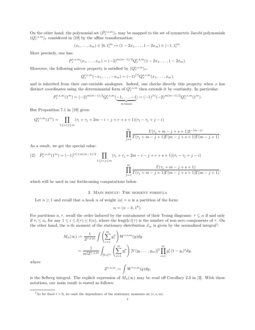 The purpose of this article is to provide an exact formula for the secon...
Philip A. Ernst, et al. ∙

Kac-Rice formula: A contemporary overview of the main results and applications

When Fourth Moments Are Enough

We prove a formula for the evaluation of averages containing a scalar fu...
Konstantinos Mamis, et al. ∙

The Hermitian Jacobi process was introduced in [12]

as a multidimensional analogue of the real Jacobi process. It is a stationary matrix-valued process whose distribution converges weakly in the large-time limit to the matrix-variate Beta distribution describing the Jacobi unitary ensemble (hereafter JUE). The latter was used in

as a random matrix-model for a Multi-Input-Multi-Output (MIMO) optical fiber channel. There, numerical evidences for the Shannon capacity and for the outage probability were supplied and support the efficiency of the matrix model. From a general fact about unitarily-invariant matrix models, this capacity may be expressed through the Christoffel-Darboux kernel for Jacobi polynomials which is the one-point correlation function of the underlying eigenvalues process (

[16]). Yet another expression for it was recently obtained in [11] relying on a remarkable formula for the moments of the unitary selberg weight ([3]). The strategy employed in [3] was partially adapted in [8] to the Hermitian Jacobi process and led to a quite complicated formula for its moments which did not allow to derive their large-size limits. The main ingredients used in [8] were the expansion of Newton power sums in the basis of Schur functions, the determinantal form of the symmetric Jacobi polynomials and an integral form of the Cauchy-Binet formula (known as Andreief’s identity).

In this paper, we follow another approach to compute the moments of the Hermitian Jacobi process based on a change of basis in the algebra of symmetric functions (with a fixed number of indeterminates). More precisely, we rather express the Newton power sums in the basis of symmetric Jacobi polynomials since the latter are mutually orthogonal with respect to the unitary Selberg weight. Doing so leads to the determinant of an ‘almost triangular’ matrix which we express in a product form using row operations. After a careful rearrangement of the terms, we end up with a considerably simpler moment formula compared to the one obtained in [8] (Theorem 1). Actually, the latter involves three nested and alternating sums together with a determinant whose entries are Beta functions. Up to our best knowledge, this determinant has no closed form except in very few special cases. The moment formula obtained in this paper contains only two nested and alternating sums whose summands are ratios of Gamma functions.

As a potential application of our formula, we propose the Hermitian Jacobi process as a dynamical analogue of the MIMO Jacobi channel studied in [6]

and compute its Shannon capacity for small power per-antenna at the transmitter. Motivated by free probability theory, we also give some interest in the case when the size of the Hermitian Jacobi process is larger than the moment order. In this respect, our moment formula may be written as a linear combination of terminating balanced

The paper is organized as follows. In the next section, we briefly review the construction of the Hermitian Jacobi process and recall the semi-group density of its eigenvalues process (when it exists). In the third section, we state our main result in Theorem 1below and prove it. For ease of reading, we proceed in several steps until getting the sought moment formula. In the last section, we discuss the application of our main result to optical fibers MIMO channel and to the large-size limit of the moments of the Hermitian Jacobi process.

2. A review of the Hermitian Jacobi process

For sake of completeness, we recall the construction of the Hermitian Jacobi process and the expression of the semi-group density of its eigenvalues process. We refer the reader to [12] and [8] for further details.

are orthogonal projections. In other words, X is the upper left corner of Y. Assume now that Y is the Brownian motion on U(d)

starting at the identity matrix. Then,

is a Haar unitary matrix and the convergence holds in the weak sense. Moreover, it was proved in

[4] that the random matrix

has the same distribution drawn from JUE with suitable parameters.

for fixed time t≥0 and write simply Mn(t). Since the matrix Jacobi process is Hermitian, then

where (λk(t),t≥0)mk=1 is the eigenvalues process of (Jt)t≥0 and E stands for the expectation of the underlying probability space. If

then the distribution of the eigenvalues process is absolutely-continuous with respect to Lebesgue measure in Rm. Besides, its semi-group density is given by a bilinear generating series of symmetric Jacobi polynomials with Jack parameter equals to 1. More precisely, let

be a partition of length at most m and let (Pr,sk)k≥0 be the sequence of orthonormal Jacobi polynomials with respect to the beta weight:

These polynomials may be defined through the Gauss hypergeometric function as:

Then the orthonormal symmetric Jacobi polynomial corresponding to τ is defined by:

if the coordinates (x1,...,xm) do not overlap and by L’Hôpital’s rule otherwise. An expansion of these polynomials in the basis of Schur functions may be found in [15]. These polynomials are mutually orthonormal with respect to the unitary Selberg weight:

in the sense that two elements corresponding to different partitions are orthogonal and the norm of each Pr,s,mτ equals one (see e.g. [2], Theorem 3.1). Moreover, the semi-group density of the eigenvalues process of Jt admits the following absolutely-convergent expansion ([9]):

If (~Pr,sk)k≥0 denotes the sequence of orthogonal Jacobi polynomials:

where (||~Pr,sτj+m−j||2)2 is the squared L2-norm of the one-variable Jacobi polynomial and

Indeed, Andreief’s identity ([7], p.37) shows that (~Pr,s,mτ)τ is an orthogonal set with respect the unitary Selberg weight and that the squared L2-norm of ~Pr,s,mτ with respect to Wr,s,m is nothing else but:

On the other hand, the polynomial set (~Pr,s,mτ)τ may be mapped to the set of symmetric Jacobi polynomials (Qr,s,mτ)τ considered in [19] by the affine transformation:

More precisely, one has:

Moreover, the following mirror property is satisfied by (Qr,s,mτ)τ:

and is inherited from their one-variable analogues. Indeed, one checks directly this property when x has distinct coordinates using the determinantal form of Qr,s,mτ then extends it by continuity. In particular:

As a result, we get the special value:

which will be used in our forthcoming computations below.

Let n≥1 and recall that a hook α of weight |α|=n is a partition of the form:

For partitions α,τ, recall the order induced by the containment of their Young diagrams: τ⊆α if and only if τi≤αi for any 1≤i≤l(τ)≤l(α), where the length l(τ) is the number of non-zero components of τ. On the other hand, the n-th moment of the stationary distribution J∞ is given by the normalized integral111As for fixed t>0, we omit the dependence of the stationary moments on (r,s,m).:

is the Selberg integral. The explicit expression of Mn(∞) may be read off Corollary 2.3 in [3]. With these notations, our main result is stated as follows:

The n-th moment of the Hermitian Jacobi process is given by:

The rest of this section is devoted to the proof of this result. Due to lengthy computations, we shall proceed in several steps where in each step, we simplify the moment expression obtained in the previous one.

We start with performing the change of basis from Schur polynomials to symmetric Jacobi polynomials. Doing so leads to the following formula for Mn(t) :

as well as the Schur polynomials associated to a partition τ of length l(τ)≤m ([17]):

These symmetric functions are related by the representation-theoretical formula (see e.g. [17], p. 48):

In order to integrate the Newton sum against the semi-group density (1), we shall further expand the Schur polynomials in the basis of symmetric Jacobi polynomials (~Pr,s,mτ)τ. To this end, we appeal to the inversion formula ([13]):

together with Proposition 3.1 in [18] (change of basis formula). Doing so yields:

Integrating y↦pn(y)Gr,s,mt(1m,y) and applying Fubini Theorem, we are led to:

For sake of simplicity, we introduce the following notations :

Using (2), the moment formula (4) is written more explicitly as:

where an empty determinant or product equals one. This expression can be considerably simplified into the one below where we prove that the factors corresponding to indices l(α)+1≤i,j≤m cancel. To this end, we find it convenient to single out the contribution of the empty partition which corresponds to the stationary regime t→+∞.

The moment formula (6) reduces to:

where for a non empty hook τ⊆α, we set:

We only consider hooks τ such that l(τ)≥1 and we proceed in three steps. In the first one, we work out the product:

equals one. In the second step, we split the product

The first product is expressed as:

As to the second, it splits in turn into: