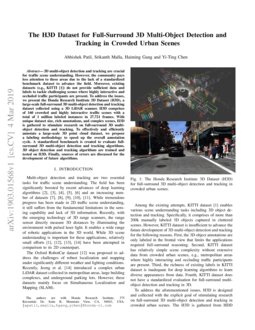 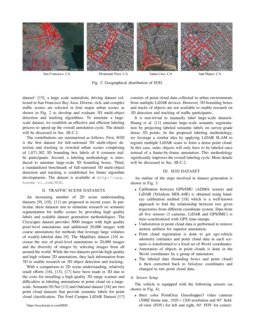 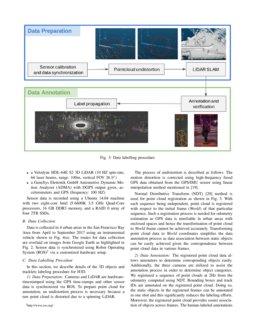 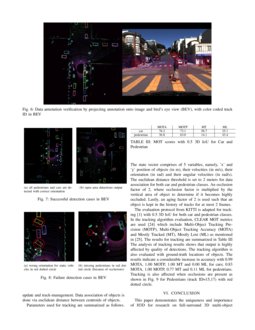 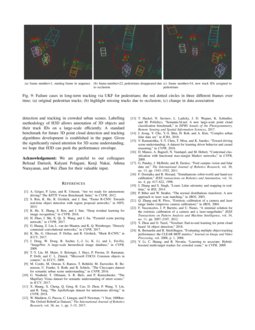 UA-DETRAC: A New Benchmark and Protocol for Multi-Object Detection and Tracking

A Robust 3D-2D Interactive Tool for Scene Segmentation and Annotation

In this paper, we propose to combine detections from background subtract...
Hui-Lee Ooi, et al. ∙

Omni3D: A Large Benchmark and Model for 3D Object Detection in the Wild

Recognizing scenes and objects in 3D from a single image is a longstandi...
Garrick Brazil, et al. ∙

Multi-object detection and tracking are two essential tasks for traffic scene understanding. The field has been significantly boosted by recent advances of deep learning algorithms

[2, 3, 4, 5, 6] and an increasing number of datasets [7, 8, 9, 10, 11]. While tremendous progress has been made in 2D traffic scene understanding, it still suffers from the fundamental limitations in the sensing capability and lack of 3D information. Recently, with the emerging technology of 3D range scanners, the range sensor directly measure 3D distances by illuminating the environment with pulsed laser light. It enables a wide range of robotic applications in the 3D world. While 3D scene understanding is important for these applications, relatively small efforts [1, 12, 13, 14] have been attempted in comparison to its 2D counterpart.

To address the aforementioned issues, H3D is designed and collected with the explicit goal of stimulating research on full-surround 3D multi-object detection and tracking in crowded urban scenes. The H3D is gathered from HDD dataset111https://usa.honda-ri.com/HDD [15], a large scale naturalistic driving dataset collected in San Francisco Bay Area. Diverse, rich, and complex traffic scenes are selected in four major urban scenes as shown in Fig. 2 to develop and evaluate 3D multi-object detection and tracking algorithms. To annotate a large-scale dataset, we establish an effective and efficient labeling process to speed up the overall annotation cycle. The details will be discussed in Sec. III-C2.

The contributions are summarized as follows. First, H3D is the first dataset for full-surround 3D multi-object detection and tracking in crowded urban scenes comprising of 1,071,302 3D bounding box labels of 8 common traffic participants. Second, a labeling methodology is introduced to annotate large-scale 3D bounding boxes. Third, a standardized benchmark of full-surround 3D multi-object detection and tracking is established for future algorithm developments. The dataset is available at http://usa.honda-ri.com/H3D.

An increasing number of 2D scene understanding datasets [9, 10, 11] are proposed in recent years. In particular, these datasets aim to stimulate research on semantic segmentation for traffic scenes by providing high quality labels and scalable dataset generation methodologies. The Cityscapes dataset provides 5000 images with high quality pixel-level annotations and additional 20,000 images with coarse annotations for methods that leverage large volumes of weakly-labeled data [9]. The Mapillary dataset [10] increase the size of pixel-level annotations to 20,000 images and the diversity of images by selecting images from all around the world. While the two datasets provide high quality and high volume 2D annotations, they lack information from 3D to enable research on 3D object detection and tracking.

With a comparison to 2D scene understanding, relatively small efforts [16, 13, 17] have been made in 3D due to the costs for installing a high quality 3D range scanner and difficulties in labeling annotations in point cloud on a large-scale. Semantic3D.Net [13] and Oakland dataset [16] are two point cloud datasets that provide semantic labels for point cloud classification. The Ford Campus LiDAR Dataset [17] consists of point cloud data collected in urban environments from multiple LiDAR devices. However, 3D bounding boxes and tracks of objects are not available to enable research on 3D detection and tracking of traffic participants.

It is non-trivial to manually label large-scale datasets. Huang et al. [11] annotate large-scale semantic segmentation by projecting labeled semantic labels on survey-grade dense 3D points. In the proposed labeling methodology, we leverage a similar idea by applying LiDAR SLAM to register multiple LiDAR scans to form a dense point cloud. In this case, static objects will only have to be labeled once instead of a frame-by-frame annotation. This methodology significantly improves the overall labeling cycle. More details will be discussed in Sec. III-C2.

An outline of the steps involved in dataset generation is shown in Fig. 3:

The vehicle is equipped with the following sensors (as shown in Fig. 4):

Data is collected in 4 urban areas in the San Francisco Bay Area from April to September 2017 using an instrumented vehicle shown in Fig. 4(a). The routes for data collection are overlaid on images from Google Earth as highlighted in Fig. 2. Sensor data is synchronized using Robot Operating System (ROS)222http://www.ros.org/ via a customized hardware setup.

In this section, we describe details of the 3D objects and tracklets labeling procedure for H3D.

Cameras and LiDAR are hardware-timestamped using the GPS time-stamps and other sensor data is synchronized via ROS. To prepare point cloud for annotation, an undistortion process is necessary because a raw point cloud is distorted due to a spinning LiDAR.

The process of undistortion is described as follows. The motion distortion is corrected using high-frequency fused GPS data obtained from the GPS/IMU sensor using linear interpolation method mentioned in

Normal Distributive Transform (NDT) [20] method is used for point cloud registration as shown in Fig. 3. With each sequence being independent, point cloud is registered with respect to the initial frame (World) of that particular sequence. Such a registration process is needed for odometry estimation as GPS data is unreliable in urban areas with enclosed spaces and hence the transformation of point cloud to World frame cannot be achieved accurately. Transforming point cloud data to World coordinates simplifies the data annotation process as data association between static objects can be easily achieved given the correspondence between point cloud data in various frames.

The registered point cloud data allows annotators to determine corresponding objects easily. Additionally, the three cameras are utilized to assist the annotation process in order to determine object categories. We registered a sequence of point clouds at 2Hz from the odometry computed using NDT. Bounding boxes and track IDs are annotated on the registered point cloud. Doing so, the static objects in the registered frames can be annotated in one shot and this significantly reduces the labeling efforts. Moreover, the registered point cloud provides easier association of objects across frames. The human-labeled annotations are then propagated to 10Hz using a linear interpolation technique, assuming a constant velocity model between each frame. The labeled data (bounding boxes with track IDs) is transformed back to the Velodyne coordinates using odometry estimates.

H3D is currently the only dataset that enables full 360-degree object detection in point cloud. This paper evaluates VoxelNet [23] on H3D to obtain baseline values and assess the complexity of the dataset.

A similar training procedure is adapted to that from the original literature (VoxelNet) with following modifications. Points within 40 meters radius of ego-vehicle are considered for car detection and points within 25.6 meters radius are considered for pedestrian detection. The models for both car and pedestrian detection are trained using an ADAM optimizer. A learning rate of 0.01 is used for the first 40 epochs, then decreased to 0.001 for the next 20 epochs and further decreased to 0.0001 for the last 20 epochs (total 80 epochs). A batch size of 12 is used during training.

For evaluation, a similar protocol as KITTI is adapted. The IoU threshold for class car is set to 0.5 and that for class pedestrian is set to 0.25. Car and truck classes are combined when evaluating car detection performance. The results are summarized in (Table II) and shown in Fig. 7. The following challenges are encountered in 3D detection as highlighted in Fig. 8. The yaw estimation is not good where number of points for the particular object is less. Pedestrian detection fails to perform due to occlusion in crowded scenes.

Parameters used for tracking are summarized as follows. The state vector comprises of 5 variables, namely, ’x’ and ’y’ position of objects (in m), their velocities (in m/s), their orientation (in rad) and their angular velocities (in rad/s). The euclidean distance threshold is set to 2 meters for data association for both car and pedestrian classes. An occlusion factor of 2, where occlusion factor is multiplied by the vertical area of object to determine if it becomes highly occluded. Lastly, an aging factor of 2 is used such that an object is kept in the history of tracks for at most 2 frames.

The evaluation protocol from KITTI is adapted for tracking [1] with 0.5 3D IoU for both car and pedestrian classes. In the tracking algorithm evaluation, CLEAR MOT metrics are used [24] which include Multi-Object Tracking Precision (MOTP), Multi-Object Tracking Accuracy (MOTA) and Mostly Tracked (MT), Mostly Lost (ML) as mentioned in [25]. The results for tracking are summarized in Table III The analysis of tracking results shows that output is highly affected by quality of detections. The tracking algorithm is also evaluated with ground-truth locations of objects. The results indicate a considerable increase in accuracy with 0.99 MOTA, 1.00 MOTP, 1.00 MT and 0.00 ML for cars; 0.83 MOTA, 1.00 MOTP, 0.77 MT and 0.11 ML for pedestrians. Tracking is also affected when occlusions are present as shown in Fig. 9 for Pedestrians (track ID=15,17) with red dotted circle.

This paper demonstrates the uniqueness and importance of H3D for research on full-surround 3D multi-object detection and tracking in crowded urban scenes. Labelling methodology of H3D allows annotation of 3D objects and their track IDs on a large-scale efficiently. A standard benchmark for future 3D point cloud detection and tracking algorithms development is established in the paper. Given the significantly raised attention for 3D scene understanding, we hope that H3D can push the performance envelope.

Acknowledgement: We are grateful to our colleagues Behzad Dariush, Kalyani Polagani, Kenji Nakai, Athma Narayanan, and Wei Zhan for their valuable input.