The Grover search as a naturally occurring phenomenon

We provide the first evidence that under certain conditions, electrons may naturally behave like a Grover search, looking for defects in a material. The theoretical framework is that of discrete-time quantum walks (QW), i.e. local unitary matrices that drive the evolution of a single particle on the lattice. Some of these are well-known to recover the (2+1)--dimensional Dirac equation in continuum limit, i.e. the free propagation of the electron. We study two such Dirac QW, one on the square grid and the other on a triangular grid reminiscent of graphene-like materials. The numerical simulations show that the walker localises around a defect in O(√(N)) steps with probability O(1/N). This in line with previous QW formulations of the Grover search on the 2D grid. But these Dirac QW are `naturally occurring' and require no specific oracle step other than a hole defect in a material. 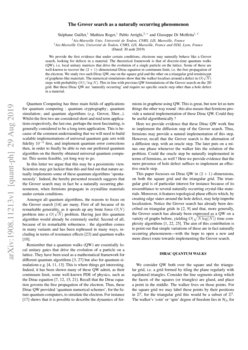 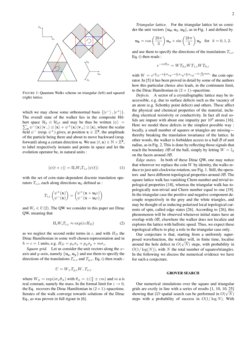 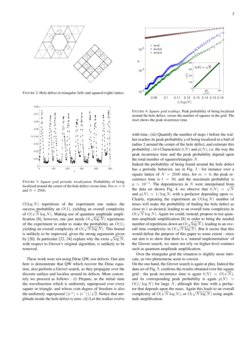 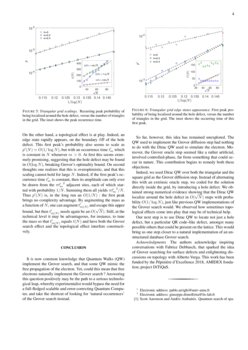 We consider QW both over the square and the triangular grid, i.e. a grid formed by tiling the plane regularly with equilateral triangles. Consider the line segments along which the facets of the squares (or triangles) are glued, and place a point in the middle. The walker lives on those points. For the square grid we may label these points by their positions in Z2, for the triangular grid this would be a subset of Z2

. The walker’s ‘coin’ or ‘spin’ degree of freedom lies in

H2, for which we may chose some orthonormal basis {|v−⟩,|v+⟩}. The overall state of the walker lies in the composite Hilbert space H2⊗HZ2 and may be thus be written |ψ⟩=∑xψ−(x)|v−⟩⊗|x⟩+ψ+(x)|v+⟩⊗|x⟩, where the scalar field ψ− (resp. ψ+) gives, at position x∈Z2, the amplitude of the particle being there and about to move backward (resp. forward) along a certain direction u. We use (t,x)∈N×Z2, to label respectively instants and points in space and let the evolution operator be, in natural units:

with the set of coin-state-dependent discrete translation operators Ti,ε, each along directions ui, defined as:

and Wi∈U(2). The QW we consider in this paper are Dirac QW, meaning that

as we neglect the second order terms in ε, and with HD the Dirac Hamiltonian in some well-chosen representation and in ℏ=c=1 units, e.g. HD=pxσx+pyσy+mσz.

Let us consider the unit vectors along the

x–axis and y–axis, namely {ux,uy} and use them to specify the directions of the translations Tx,ε and Ty,ε. Eq. (3) then reads:

where W±=exp(iσxθ±) with θ±=±(π4±εm) and m a is real constant, namely the mass. In the formal limit for ε→0, the Eq. 4 recovers the Dirac Hamiltonian in (2+1)–spacetime. Iterates of the walk converge towards solutions of the Dirac Eq., as was proven in full rigour in arrighi2014dirac .

For the triangular lattice let us consider the unit vectors {u0,u1,u2}, as in Fig. 1 and defined by

and use them to specify the directions of the translations Ti,ε. Eq. (3) then reads:

with W=eiπ3e−iα2σye−iπ3σzeiα2σye−iε3√5mσz the coin operator. In arrighi_dirac_2018 it has been proved in detail by some of the authors how this particular choice also leads, in the continuum limit, to the Dirac Hamiltonian in (2+1)–spacetime.

A sector of a crystallographic lattice may be inaccessible, e.g. due to surface defects such as the vacancy of an atom (e.g. Schottky point defect) and others. These affect the physical and chemical properties of the material, including electrical resistivity or conductivity. In fact all real solids are impure with about one impurity per 106 atoms ibach1995solid . Here we model these defects in the simplest possible way: locally, a small number of squares or triangles are missing—thereby breaking the translation invariance of the lattice. In other words, the walker is forbidden access to a ball B of unit radius, as in Fig. 2. This is done by reflecting those signals that reach the boundary ∂B of the ball, simply by letting W=I2 on the facets around ∂B.

In both of these Dirac QW, one may notice that wherever we replace the coin W by identity, the walks reduce to just anti-clockwise rotation, see Fig. 1. Still, the operators 4 and 6 have different topological properties around ∂B. The square lattice walk has vanishing Chern number and trivial topological properties kitagawa2012topological , whereas the triangular walk has topologically non-trivial and Chern number equal to one kitagawa2010exploring . In the triangular case the positive and negative component decouple respectively in the grey and the white triangles, and may be thought of as inducing polarized local topological currents of spin, called edge states verga2017edge . According to verga2017edge , this phenomenon will be observed whenever initial states have an overlap with ∂B, elsewhere the walker does not localize and explores the lattice with ballistic speed. Thus, we expect these topological effects to play a role in the triangular case only.

Our conjecture is that, starting from a uniformly superposed wavefunction, the walker will, in finite time, localise around the hole defect in O(√N) steps, with probability in O(1/log(N)), with N the total number of squares/triangles. In the following we discuss the numerical evidence we have for such a conjecture.

Our numerical simulations over the square and triangular grids are exctly in line with a series of results childs2004spatial ; childs2004spatial ; aaronson2003quantum ; tulsi2008faster showing that 2D spatial search can be performed in O(√N) steps with a probability of success in O(1/logN). With O(logN) repetitions of the experiment one makes the success probability an O(1), yielding an overall complexity of O(√NlogN). Making use of quantum amplitude amplification brassard2002quantum , however, one just needs O(√logN) repetitions of the experiment in order to make the probability an O(1), yielding an overall complexity of O(√NlogN). This bound is unlikely to be improved, given the strong arguments given by magniez2012hitting . In particular santha2008quantum ; patel2010search explain why the extra √logN, with respect to Grover’s original algorithm, is unlikely to be removed.

These work were not using Dirac QW, nor defects. Our aim here is demonstrate that QW which recover the Dirac equation, also perform a Grover search, as they propagate over the discrete surface and localise around its defects. More concretely we proceed as follows: (i) Prepare, as the initial state the wavefunction which is uniformly superposed ever every square or triangle, and whose coin degree of freedom is also the uniformly superposed (|v+⟩+|v−⟩)/√2. Notice that amplitude inside the hole defect is zero; (ii) Let the walker evolve with time; (iii) Quantify the number of steps t before the walker reaches its peak probability p of being localized in a ball of radius 2

around the center of the hole defect, and estimate this probability; (iv) Characterize

were interpolated from the data set shown Fig.

4, we observe that t(N)=√N and p(N)≃1/logN, with a prefactor depending upon m. Clearly, repeating the experiment an O(logN) number of times will make the probability of finding the hole defect as close to 1 as desired, leading to an overall time complexity in O(√NlogN). Again we could, instead, propose to use quantum amplitude amplification brassard2002quantum in order to bring the needed number of repetitions down an O(√logN), leading to an overall time complexity in O(√NlogN). But it seems that this would defeat the purpose of this paper to some extent: since our aim is to show that there is a ‘natural implementation’ of the Grover search, we must not rely on higher-level routines such as quantum amplitude amplification.

Over the triangular grid the situation is slightly more intricate, as two phenomena seem to coexist. On the one hand, the Grover search is again at play. Indeed the data set of Fig. 5, confirms the results obtained over the square grid: the peak recurrence time is again t(N)≃O(√N), and its corresponding peak probability is again p(N)≃O(1/logN) for large N, although this time with a prefactor that depends upon the mass. Again this leads to an overall complexity of O(√NlogN), or O(√NlogN) using amplitude amplification. On the other hand, a topological effect is at play. Indeed, an edge state rapidly appears, on the boundary ∂B of the hole defect. This first peak’s probability also seems to scale as p′(N)≃O(1/logN), but with an occurrence time t′m which is constant in N whenever m>0. At first this seems extremely promising, suggesting that the hole defect may be found in O(logN), breaking Grover’s optimality bound. On second thoughts one realizes that this is overoptimistic, and that this scaling cannot hold for large N. Indeed, if the first peak’s occurrence time t′m is constant, then its amplitude can only ever be drawn from the πt′m2 adjacent sites, each of which started with probability 1/N. Summing them all yields πt′m2/N. Thus p′(N) is, in the long run an O(1/N): the first peak brings no complexity advantage. By augmenting the mass as a function of N, one can augment t′m(N) and escape this upper bound, but then t′m(N) needs again be an O(√N). Still, at the technical level it may be advantageous, for instance, to tune the mass so that t′m(N) equals t(N) and have both the Grover search effect and the topological effect interfere constructively.

It is now common knowledge that Quantum Walks (QW) implement the Grover search, and that some QW mimic the free propagation of the electron. Yet, could this mean that free electrons naturally implement the Grover search? Answering this question positively may be the path to a serious technological leap, whereby experimentalist would bypass the need for a full-fledged scalable and error-correcting Quantum Computer, and take the shortcut of looking for ‘natural occurrences’ of the Grover search instead.

So far, however, this idea has remained unexplored. The QW used to implement the Grover diffusion step had nothing to do with the Dirac QW used to simulate the electron. Moreover, the Grover oracle step seemed like a rather artificial, involved controlled-phase, far from something that could occur in nature. This contribution begins to remedy both these objections.

Indeed, we used Dirac QW over both the triangular and the square grid as the Grover diffusion step. Instead of alternating this with an extrinsic oracle step, we coded for the solution directly inside the grid, by introducing a hole defect. We obtained strong numerical evidence showing that the Dirac QW localize around the hole defect in O(√N) steps with probability O(1/logN), just like previous QW implementations of the Grover search would. We observed how sometimes topological effects come into play that may be of technical help.

Our next step is to use Dirac QW to locate not just a hole defect, but a particular QR code–like defect, amongst many possible others that could be present on the lattice. This would bring us one step closer to a natural implementation of an unstructured database Grover search.

The authors acknowledge inspiring conversations with Fabrice Debbasch, that sparked the idea of Grover searching for surface defects and enlightening discussions on topology with Alberto Verga. This work has been funded by the Pépinière d’Excellence 2018, AMIDEX fondation, project DiTiQuS.