The Graph Structure of Chebyshev Polynomials over Finite Fields and Applications

We completely describe the functional graph associated to iterations of Chebyshev polynomials over finite fields. Then, we use our structural results to obtain estimates for the average rho length, average number of connected components and the expected value for the period and preperiod of iterating Chebyshev polynomials. 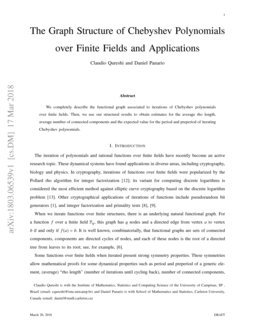 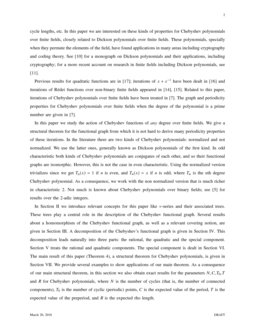 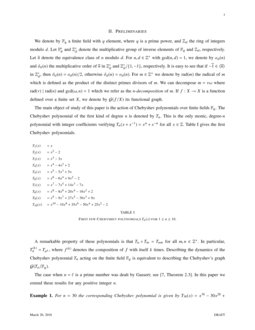 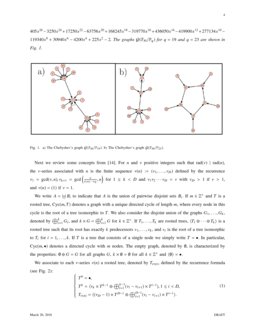 The iteration of polynomials and rational functions over finite fields have recently become an active research topic. These dynamical systems have found applications in diverse areas, including cryptography, biology and physics. In cryptography, iterations of functions over finite fields were popularized by the Pollard rho algorithm for integer factorization [12]; its variant for computing discrete logarithms is considered the most efficient method against elliptic curve cryptography based on the discrete logarithm problem [13]. Other cryptographical applications of iterations of functions include pseudorandom bit generators [1], and integer factorization and primality tests [8, 9].

When we iterate functions over finite structures, there is an underlying natural functional graph. For a function f over a finite field Fq, this graph has q nodes and a directed edge from vertex a to vertex b if and only if f(a)=b. It is well known, combinatorially, that functional graphs are sets of connected components, components are directed cycles of nodes, and each of these nodes is the root of a directed tree from leaves to its root; see, for example, [6].

degree over finite fields. We give a structural theorem for the functional graph from which it is not hard to derive many periodicity properties of these iterations. In the literature there are two kinds of Chebyshev polynomials: normalized and not normalized. We use the latter ones, generally known as Dickson polynomials of the first kind. In odd characteristic both kinds of Chebyshev polynomials are conjugates of each other, and so their functional graphs are isomorphic. However, this is not the case in even characteristic. Using the normalized version trivializes since we get

Tn(x)=1 if n is even, and Tn(x)=x if n is odd, where Tn is the nth degree Chebyshev polynomial. As a consequence, we work with the non normalized version that is much richer in characteristic 2. Not much is known about Chebyshev polynomials over binary fields; see [5] for results over the 2-adic integers.

In Section II we introduce relevant concepts for this paper like ν-series and their associated trees. These trees play a central role in the description of the Chebyshev functional graph. Several results about a homomorphism of the Chebyshev functional graph, as well as a relevant covering notion, are given in Section III. A decomposition of the Chebyshev’s functional graph is given in Section IV. This decomposition leads naturally into three parts: the rational, the quadratic and the special component. Section V treats the rational and quadratic components. The special component is dealt in Section VI. The main result of this paper (Theorem 4), a structural theorem for Chebyshev polynomials, is given in Section VII. We provide several examples to show applications of our main theorem. As a consequence of our main structural theorem, in this section we also obtain exact results for the parameters N,C,T0,T and R for Chebyshev polynomials, where N is the number of cycles (that is, the number of connected components), T0 is the number of cyclic (periodic) points, C is the expected value of the period, T is the expected value of the preperiod, and R is the expected rho length.

We denote by Fq a finite field with q element, where q is a prime power, and Zd the ring of integers modulo d. Let F∗q and Z∗d denote the multiplicative group of inverse elements of Fq and Zd, respectively. Let ¯¯¯n denote the equivalence class of n modulo d. For n,d∈Z+ with gcd(n,d)=1, we denote by od(n) and ~od(n) the multiplicative order of ¯¯¯n in Z∗d and Z∗d/{1,−1}, respectively. It is easy to see that if −¯¯¯1∈⟨¯¯¯n⟩ in Z∗d, then ~od(n)=od(n)/2, otherwise ~od(n)=od(n). For m∈Z+ we denote by rad(m) the radical of m which is defined as the product of the distinct primes divisors of m. We can decompose m=νω where rad(ν)∣rad(n) and gcd(ω,n)=1 which we refer as the n-decomposition of m. If f:X→X is a function defined over a finite set X, we denote by G(f/X) its functional graph.

A remarkable property of these polynomials is that Tn∘Tm=Tnm for all m,n∈Z+. In particular, T(k)n=Tnk, where f(k) denotes the composition of f with itself k times. Describing the dynamics of the Chebyshev polynomial Tn acting on the finite field Fq is equivalent to describing the Chebyshev’s graph G(Tn/Fq).

The case when n=ℓ is a prime number was dealt by Gassert; see [7, Theorem 2.3]. In this paper we extend these results for any positive integer n.

We write A=⨄Bi to indicate that A is the union of pairwise disjoint sets Bi. If m∈Z+ and T is a rooted tree, Cyc(m,T) denotes a graph with a unique directed cycle of length m, where every node in this cycle is the root of a tree isomorphic to T. We also consider the disjoint union of the graphs G1,…,Gk, denoted by ⨁ki=1Gi, and k×G=⨁ki=1G for k∈Z+. If T1,…,Tk are rooted trees, ⟨T1⊕⋯⊕Tk⟩ is a rooted tree such that its root has exactly k predecessors v1,…,vk, and vi is the root of a tree isomorphic to Ti for i=1,…,k. If T is a tree that consists of a single node we simply write T=∙. In particular, Cyc(m,∙) denotes a directed cycle with m nodes. The empty graph, denoted by ∅, is characterized by the properties: ∅⊕G=G for all graphs G, k×∅=∅ for all k∈Z+ and ⟨∅⟩=∙.

We associate to each ν-series ν(n) a rooted tree, denoted by Tν(n), defined by the recurrence formula (see Fig. 2):

The following theorem is a direct consequence of Corollary 3.8 and Theorem 3.16 of [14]. As usual, φ denotes Euler’s totient function.

Let n∈Z+ and m=νω be the n-decomposition of m. Denoting by G(n/Zm) the functional graph of the multiplication-by-n map on the cyclic group Zm, the following isomorphism holds:

A strategy to describe a functional graph G(f/X) of a function f:X→X is decomposing the set X in f-invariant components. A subset A⊆X is forward f-invariant when f(A)⊆A. In this case the graph G(f/A) is a subgraph of G(f/X). If f−1(A)⊆A, the set A is backward f-invariant. The set A is f-invariant if it is both forward and backward f-invariant. In this case G(f/A) is not only a subgraph of G(f/X) but also a union of connected components and we can write G(f/X)=G(f/A)⊕G(f/Ac), where Ac=X∖A. In this paper, we decompose the set Fq in Tn-invariant subsets A1,…,Aκ such that each functional graph G(Tn/Ai) for i=1,…,κ is easier to describe than the general case and G(Tn/Fq)=⨁κi=1G(Tn/Ai).

It is easy to prove by induction that the relation ϕ∘f1=f2∘ϕ implies ϕ∘f(k)1=f(k)2∘ϕ for all k≥1, that is, ϕ:G(f(k)1/X1)→G(f(k)2/X2) is also a homomorphism for all k≥1. If in addition ϕ is bijective (as function from X1 to X2) then ϕ:G(f1/X1)→G(f2/X2) is an isomorphism of functional graphs. In this case the functional graphs are the same, up to the labelling of the vertices. The main result of this paper (Theorem 4) is an explicit description of G(Tn/Fq), the functional graph of the Chebyshev polynomial Tn over a finite field Fq.

In the first part of this section we introduce the concept of θ-covering between two functional graphs and derive some properties. In the last part we apply these results to obtain some rooted tree isomorphism formulas which are used in the next sections.

In our case of study (functional graph of Chebyshev polynomials) we consider the set ~Fq=F∗q∪H, where H is the multiplicative subgroup of F∗q2 of order q+1, and the following maps:

A useful relationship between these maps and the Chebyshev map are Tn∘η=η∘rn and rn∘i=i∘rn. In other words we have the following commutative diagrams:

Let ϕ:G(f1/X1)→G(f2/X2) be a homomorphism of functional graphs and θ:X1→X1 be a permutation (bijection) which commutes with f1 (that is, f1∘θ=θ∘f1). Then ϕ is a θ-covering if for every a∈X2 there is α∈X1 such that ϕ−1(a)={θ(i)(α):i∈Z} (in other words, if the preimage of each point is a θ-orbit). The homomorphism ϕ is a covering if it is a θ-covering for some θ verifying the above properties.

We remark that a covering is necessarily onto and every isomorphism ϕ:G(f1/X1)→G(f2/X2) is a covering (with respect to the identity map id:X1→X1, id(x)=x). We note that the condition of ϕ−1(a) being a θ-orbit for all a∈X2 implies that ϕ∘θ=ϕ.

Next we prove some general properties for coverings of functional graphs that are used in the next section for the particular case of the covering η:G(rn/~Fq)→G(Tn/Fq). In the next propositions we denote by Pf and Nf the set of periodic and non-periodic points with respect to the map f, respectively. We note that if ϕ:G(f1/X1)→G(f2/X2) is a homomorphism and x∈Pf1 then there is a k≥1 such that f(k)1(x)=x. This implies f(k)2(ϕ(x))=ϕ(f(k)1(x))=ϕ(x), thus x∈ϕ−1(Pf2) and we have Pf1⊆ϕ−1(Pf2). The next proposition shows that when ϕ is a covering this inclusion is in fact an equality.

With the same notation and hypothesis of Proposition 3, if we denote by P1=Predα(f1/X1) and P2=Predϕ(α)(f2/X2) we have that the restricted function ϕ|P1:P1→P2 is onto. We want to find conditions to guarantee that ϕ|P1:P1→P2 is a bijection. We recall that the order of a permutation θ:X1→X1 is the smallest positive integer ℓ≥1 such that θ(ℓ)=id. This implies that the cardinality of the θ-orbit of a point α∈X1, given by {θ(i)(α):0≤i<ℓ}, is a divisor of ℓ.

An important particular case is when θ:X1→X1 is the identity map. In this case every point α∈X1 is θ-maximal.

Let ϕ:G(f1/X1)→G(f2/X2) be a homomorphism of functional graph. We consider a point α∈X1 and the sets P1=Predα(f1/X1) and P2=Predϕ(α)(f2/X2). When ϕ(P1)⊆P2 and the restricted map ϕ|P1:P1→P2 is a bijection, this map determines an isomorphism between the rooted trees T1=Treeα(f1/X1) and T2=Treeϕ(α)(f2/X2) (i.e. a bijection between the vertices preserving directed edges). In this case we say that ϕ|P1:T1→T2 is a rooted tree isomorphism and the trees T1 and T2 are isomorphic which is denoted by T1≃T2. Sometimes, when the context is clear, we abuse notation and write T1=T2 when these trees are isomorphic.

The first result is about the trees attached to the map rn(α)=αn. Since F∗q and H are closed under multiplication we have rn(F∗q)⊆F∗q and rn(H)⊆H.

The sets F∗q and H are multiplicative cyclic groups of order q−1 and q+1, respectively. In general, if G is a multiplicative cyclic group of order m=νω with rad(ν)∣rad(n), gcd(n,ω)=1, and rn:G→G is the map given by rn(g)=gn we prove that Treeg0(rn/G)=Tν(n). Indeed, if ξ is a generator of G and ϕ:Zm→G is the map given by ϕ(i)=ξi, then rn∘ϕ(i)=(ξi)n=ξni=ϕ∘n(i) (where n denotes the multiplication-by-n map). This implies that ϕ:G(n/Zm)→G(rn/G) is an isomorphism of functional graphs. Since all the trees attached to periodic points in G(n/Zm) are isomorphic to Tν(n) (Theorem 1) the same occurs for the trees attached to periodic points in G(rn/G). \qed ∎

Consider the map op:Fq→Fq given by op(x)=−x. Since n is an odd integer, the Chebyshev polynomial is an odd function and we have op∘Tn=Tn∘op. Thus op:G(Tn/Fq)→G(Tn/Fq) is an isomorphism of functional graphs and the results follows from Proposition 4. \qed ∎

We consider the isomorphism of functional graphs i:G(rn/~Fq)→G(rn/~Fq) given by i(x)=x−1 (it is an isomorphism because i:~Fq→~Fq is bijective and i∘rn=rn∘i). The results follows from Proposition 4. \qed ∎

A functional graph G(f/X) is uniform if for every pair of periodic points x,x′∈X the trees Treex(f/X) and Treex′(f/X) are isomorphic.

In this section we decompose the set Fq in three Tn-invariant sets: R (the rational component), Q (the quadratic component) and S (the special component), obtaining a decomposition of the Chebyshev functional graph

Moreover, we prove that the functional graphs of the right hand side are uniform (Proposition 10). We describe each component separately.