The Gotsman-Linial Conjecture is False

In 1991, Craig Gotsman and Nathan Linial conjectured that for all n and d, the average sensitivity of a degree-d polynomial threshold function on n variables is maximized by the degree-d symmetric polynomial which computes the parity function on the d layers of the hypercube with Hamming weight closest to n/2. We refute the conjecture for almost all d and for almost all n, and we confirm the conjecture in many of the remaining cases. 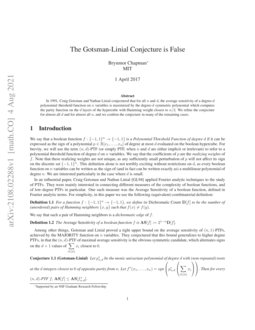 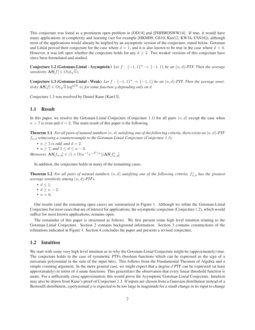 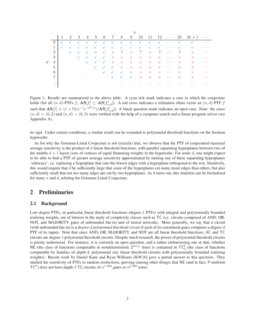 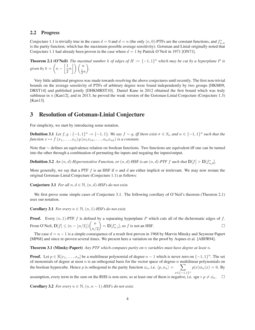 A polynomial approach to the Collatz conjecture

Tuza famously conjectured in 1981 that in a graph without k+1 edge-disjo...
Marthe Bonamy, et al. ∙

On The "Majority is Least Stable" Conjecture

We show that the "majority is least stable" conjecture is true for n=1 a...
Aniruddha Biswas, et al. ∙

The real tau-conjecture is true on average

Counterexamples to the Low-Degree Conjecture

Logarithmic Pruning is All You Need

We say that a boolean function f:{−1,1}n→{−1,1} is a Polynomial Threshold Function of degree d if it can be expressed as the sign of a polynomial p∈R[x1,…,xn] of degree at most d evaluated on the boolean hypercube. For brevity, we will use the term (n,d)-PTF (or simply PTF, when n and d are either implicit or irrelevant) to refer to a polynomial threshold function of degree d on n variables. We say that the coefficients of p are the realizing weights of f. Note that these realizing weights are not unique, as any sufficiently small perturbation of p will not affect its sign on the discrete set {−1,1}n. This definition alone is not terribly exciting without restrictions on d, as every boolean function on n variables can be written as the sign of (and in fact can be written exactly as) a multilinear polynomial of degree n. We are interested particularly in the case where d is small.

In an influential paper, Craig Gotsman and Nathan Linial [GL94] applied Fourier analytic techniques to the study of PTFs. They were mainly interested in connecting different measures of the complexity of boolean functions, and of low-degree PTFs in particular. One such measure was the Average Sensitivity of a boolean function, defined in Fourier analytic terms. For simplicity, in this paper we use the following (equivalent) combinatorial definition:

We say that such a pair of Hamming neighbors is a dichromatic edge of f.

The Average Sensitivity of a boolean function f is AS[f]:=21−nD[f].

Among other things, Gotsman and Linial proved a tight upper bound on the average sensitivity of (n,1)-PTFs, achieved by the MAJORITY function on n variables. They conjectured that this bound generalizes to higher degree PTFs, in that the (n,d)-PTF of maximal average sensitivity is the obvious symmetric candidate, which alternates signs on the d+1 values of ∑i∈[n]xi closest to 0.

Let p∗n,d be the monic univariate polynomial of degree d with (non-repeated) roots at the d integers closest to 0 of opposite parity from n. Let f∗(x1,…,xn)=sgn⎛⎝p∗n,d⎛⎝∑i∈[n]xi⎞⎠⎞⎠. Then for every (n,d)-PTF f, AS[f]≤AS[f∗n,d].

This conjecture was listed as a prominent open problem in [OD14] and [FHHMOSWW14]. If true, it would have many applications in complexity and learning (see for example [HKM09, GS10, Kan12, KW16, CSS16]), although most of the applications would already be implied by an asymptotic version of the conjecture, stated below. Gotsman and Linial proved their conjecture for the case where d=1, and it is also known to be true in the case where d=0. However, it was left open whether the conjecture holds for any d≥2. Two weaker versions of this conjecture have since been formulated and studied.

In this paper, we resolve the Gotsman-Linial Conjecture (Conjecture 1.1) for all pairs (n,d) except the case when n>7 is even and d=2. The main result of this paper is the following.

For all pairs of natural numbers (n,d) satisfying one of the following criteria, there exists an (n,d)-PTF fn,d witnessing a counterexample to the Gotsman-Linial Conjecture (Conjecture 1.1):

In addition, the conjecture holds in many of the remaining cases.

For all pairs of natural numbers (n,d) satisfying one of the following criteria, f∗n,d has the greatest average sensitivity among (n,d)-PTFs.

Our results (and the remaining open cases) are summarized in Figure 1. Although we refute the Gotsman-Linial Conjecture for most cases that are of interest for applications, the asymptotic conjecture (Conjecture 1.2), which would suffice for most known applications, remains open.

The remainder of this paper is structured as follows. We first present some high level intuition relating to the Gotsman-Linial Conjecture. Section 2 contains background information. Section 3 contains constructions of the refutations indicated in Figure 1. Section 4 concludes the paper and presents a revised conjecture.

We start with some very high level intuition as to why the Gotsman-Linial Conjecture might be (approximately) true. The conjecture holds in the case of symmetric PTFs (boolean functions which can be expressed as the sign of a univariate polynomial in the sum of the input bits). This follows from the Fundamental Theorem of Algebra and a simple counting argument. In the more general case, we might expect that a degree-d PTF can be expressed (at least approximately) in terms of d unate functions. This generalizes the observation that every linear threshold function is unate. For a sufficiently close approximation, this would prove the Asymptotic Gotsman-Linial Conjecture. Intuition may also be drawn from Kane’s proof of Conjecture 1.3

. If inputs are chosen from a Gaussian distribution instead of a Bernoulli distribution, a polynomial

p is expected to be too large in magnitude for a small change in its input to change its sign. Under certain conditions, a similar result can be extended to polynomial threshold functions on the boolean hypercube.

As for why the Gotsman-Linial Conjecture is not (exactly) true, we observe that the PTF of conjectured maximal average sensitivity is the product of d

linear threshold functions, with parallel separating hyperplanes between two of the middle

d+1 layers (sets of vertices of equal Hamming weight) in the hypercube. For some d, one might expect to be able to find a PTF of greater average sensitivity approximated by turning one of these separating hyperplanes ‘sideways’, i.e. replacing a hyperplane that cuts the fewest edges with a hyperplane orthogonal to the rest. Intuitively, this would require that d be sufficiently large that some of the hyperplanes cut many more edges than others, but also sufficiently small that not too many edges are cut by two hyperplanes. As it turns out, this intuition can be formalized for many n and d, refuting the Gotsman-Linial Conjecture.

Low-degree PTFs, in particular linear threshold functions (degree-1 PTFs) with integral and polynomially bounded realizing weights, are of interest in the study of complexity classes such as TC

Conjecture 1.1 is trivially true in the cases d=0 and d=n (the only (n,0)-PTFs are the constant functions, and f∗n,n is the parity function, which has the maximum possible average sensitivity). Gotsman and Linial originally noted that Conjecture 1.1 had already been proven in the case where d=1 by Patrick O’Neil in 1971 [ON71].

Very little additional progress was made towards resolving the above conjectures until recently. The first non-trivial bounds on the average sensitivity of PTFs of arbitrary degree were found independently by two groups [HKM09, DRST14] and published jointly [DHKMRST10]. Daniel Kane in 2012 obtained the first bound which was truly sublinear in n [Kan12], and in 2013, he proved the weak version of the Gotsman-Linial Conjecture (Conjecture 1.3) [Kan13].

For simplicity, we start by introducing some notation.

Note that ∼ defines an equivalence relation on boolean functions. Two functions are equivalent iff one can be turned into the other through a combination of permuting the inputs and negating the inputs/output.

More generally, we say that a PTF f is an HSF if n and d are either implicit or irrelevant. We may now restate the original Gotsman-Linial Conjecture (Conjecture 1.1) as follows:

We first prove some simple cases of Conjecture 3.1. The following corollary of O’Neil’s theorem (Theorem 2.1) uses our notation.

The case d=n−1 is a simple consequence of a result first proven in 1968 by Marvin Minsky and Seymour Papert [MP68] and since re-proven several times. We present here a variation on the proof by Aspnes et al. [ABFR94].

Any PTF which computes parity on n variables must have degree at least n.

Proof. Let p∈R[x1,…,xn] be a multilinear polynomial of degree n−1 which is never zero on {−1,1}n. The set of monomials of degree at most n

is an orthogonal basis for the vector space of degree-

n multilinear polynomials on the boolean hypercube. Hence p is orthogonal to the parity function ϕn, i.e. ⟨p,ϕn⟩=∑x∈{−1,1}np(x)ϕn(x)=0. By assumption, every term in the sum on the RHS is non-zero, so at least one of them is negative, i.e. sgn∘p≠ϕn. □

The existence of a (5,2)-HSF precludes the use of Lemma 3.2 to prove that (6,2)-HSFs do not exist. However, the uniqueness of f5,2, along with the fact that it only has one additional dichromatic edge, allows for a proof using Lemma 3.1.

with probability strictly greater than

This also completes the proof of Theorem 1.2. □

Summing the above expressions over these nine edges, we have

Using a similar construction, we now prove the existence of HSFs of arbitrary degree.

This also completes the proofs of Theorems 3.3 and 1.1. □

For almost all d and almost all n, we refute the Gotsman-Linial Conjecture (Conjecture 1.1) with a multiplicative separation of 1+Θd(n−1). This separation is too weak to refute most known applications of the conjecture. We would need to improve 1+Θd(n−1) to ω(1) to refute the Asymptotic Gotsman-Linial Conjecture (Conjecture 1.2), on which the applications depend. Although for every (n,d)-HSF f given in this paper, D[f]>D[f∗n,d], it should be noted that the RHS is still an upper bound in a limiting sense. This, along with the intuition presented in Section 1.2, invites the following revised conjecture.

Conjecture 4.1 would resolve the remaining cases of Conjectures 3.1 and 1.1, i.e.

Furthermore, our revised conjecture would imply the Asymptotic Gotsman-Linial Conjecture (Conjecture 1.2) and its consequent applications.

The author would like to thank Ryan Williams especially for inspiration, advice, feedback, and an admirable tolerance of cheesemonkeys; the Williams family, the Chap-people, Henry Qin, and Carolyn Kim for moral support and a good work environment; and Not Luke the goldfish for surviving.

Here we describe how a computer search resolved the cases of n=6 and d=2,3 of the Gotsman-Linial Conjecture. First, we note that the problem of determining whether a boolean function f:{−1,1}n→{−1,1} is an (n,d)-PTF is equivalent to determining whether a particular linear program has any feasible solution. Unfortunately, leveraging this fact to compute the maximal average sensitivity of an (n,d)-PTF with a naïve exhaustive search takes doubly exponential time so is intractable for large n (i.e. n>4). However, by using Lemma 3.1, we can conduct a more efficient search. We maintain a partial function f and conduct a DFS in which we define f successively on inputs in increasing order of Hamming weight. This allows us to keep bounds on D[f] by counting the edges that are already constrained to be monochromatic or dichromatic. When D[f] becomes too low or too high, we can prune the search and backtrack before fully defining f, allowing (tolerably) efficient searches up to n=6.