The numerical computation of matrix functions such as f(A)V, where A is an n× n large and sparse square matrix, V is an n × p block with p≪ n and f is a nonlinear matrix function, arises in various applications such as network analysis (f(t)=exp(t) or f(t)=t^3), machine learning (f(t)=log(t)), theory of quantum chromodynamics (f(t)=t^1/2), electronic structure computation, and others. In this work, we propose the use of global extended-rational Arnoldi method for computing approximations of such expressions. The derived method projects the initial problem onto an global extended-rational Krylov subspace RK^e_m(A,V)=span({∏_i=1^m(A-s_iI_n)^-1V,...,(A-s_1I_n)^-1V,V,AV, ...,A^m-1V}) of a low dimension. An adaptive procedure for the selection of shift parameters {s_1,...,s_m} is given. The proposed method is also applied to solve parameter dependent systems. Numerical examples are presented to show the performance of the global extended-rational Arnoldi for these problems. 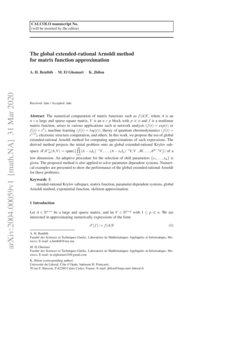 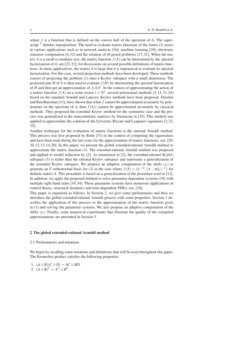 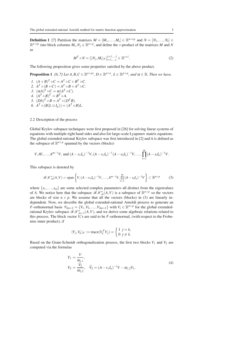 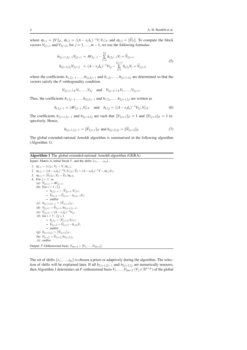 We describe a Lanczos-based algorithm for approximating the product of a...
Tyler Chen, et al. ∙

A barycentric trigonometric Hermite interpolant via an iterative approach

In this paper an interative approach for constructing the Hermite interp...
Giacomo Elefante, et al. ∙

In this paper we develop an adaptive transform-domain technique based on...
Péter Kovács, et al. ∙

Let A∈Rn×n be a large and sparse matrix, and let V∈Rn×p with 1≤p≪n. We are interested in approximating numerically expressions of the form

where f is a function that is defined on the convex hull of the spectrum of A. The superscript T denotes transposition. The need to evaluate matrix functions of the forms (1) arises in various applications such as in network analysis ESTRADA , machine learning NGO , electronic structure computation BARONI ; SAAD and the solution of ill-posed problems FENU ; HANSEN . When the matrix A is a small to meduim size, the matrix function f(A) can be determined by the spectral factorization of A; see Higham ; HANSEN , for discussions on several possible definitions of matrix functions. In many applications, the matrix A is large that it is impractical to evaluate its spectral factorization. For this case, several projection methods have been developed. These methods consist of projecting the problem (1) onto a Krylov subspace with a small dimension. The projected part H of A is then used to evaluate f(H) by determining the spectral factorization of H and then get an approximation of f(A)V. In the context of approximating the action of a matrix function f(A)

on a some vector

v∈Rn, several polynomial methods Beckermann ; DruskinTwo ; SAAD1 ; Hochbruck based on the standard Arnoldi and Lanczos Krylov methods have been proposed. Druskin and Knizhnerman DruskinExtended , have shown that when f cannot be approximated accurately by polynomials on the spectrum of A, then f(A)v cannot be approximated accurately by classical methods. They proposed the extended Krylov method for the symmetric case and the process was generalized to the nonsymmetric matrices by Simoncini in SimonciniNew . This method was applied to approximate the solution of the Sylvester, Riccati and Lyapunov equations Agougil ; Heyouni ; SimonciniNew .

Another technique for the evaluation of matrix functions is the rational Arnoldi method. This process was first proposed by Ruhe Ruhe

in the context of computing the eigenvalues and have been used during the last years for the approximation of matrix functions, see.

Guttel ; Pranic ; Druskin ; DruskinSim ; DruskinKnizhnerman ; Knizhnerman . In this paper, we present the global extended-rational Arnoldi method to approximate the matrix function (1). The extended-rational Arnoldi method was proposed and applied to model reduction by Abidi1 . As mentioned in Abidi1 , the extended-rational Krylov subspace (3) is richer than the rational Krylov subspace and represents a generalization of the extended Krylov subspace. We propose an adaptive computation of the shifts (si) to generate an F-orthonormal basis for (3) in the case where f(A)={e−tA,(A−σIn)−1} for definite matrix A. This procedure is based on a generalization of the procedure used in Druskin . In addition, we apply the proposed method to solve parameter dependent systems (19) with multiple right hand sides Gu ; SIMONCINI . These parameter systems have numerous applications in control theory, structural dynamics and time-dependent PDEs; see, Feriani .

This paper is organized as follows. In Section 2, we give some preliminaries and then we introduce the global extended-rational Arnoldi process with some properties. Section 3 describes the application of this process to the approximation of the matrix function given in (1) and solving the parameter systems. We also propose an adaptive computation of the shifts (si). Finally, some numerical experiments that illustrate the quality of the computed approximations are presented in Section 5.

We begin by recalling some notations and definitions that will be used throughout this paper. The Kronecker product satisfies the following properties

The following proposition gives some properties satisfied by the above product.

2.2 Description of the process

Global Krylov subspace techniques were first proposed in Jbilou for solving linear systems of equations with multiple right hand sides and also for large-scale Lyapunov matrix equations. The global extended-rational Krylov subspace was first introduced in Abidi1 and it is defined as the subspace of Rn×p spanned by the vectors (blocks)

This subspace is denoted by

where {s1,…,sm} are some selected complex parameters all distinct from the eigenvalues of A. We notice here that the subspace RKem(A,V) is a subspace of Rn×p so the vectors are blocks of size n×p. We assume that all the vectors (blocks) in (3) are linearly independent. Now, we describe the global extended-rational Arnoldi process to generate an F-orthonormal basis V2m+2={V1,V2,…,V2m+2} with Vi∈Rn×p for the global extended-rational Krylov subspace RKem+1(A,V), and we derive some algebraic relations related to this process. The block vector Vi’s are said to be F-orthonormal, (with respect to the Frobenius inner product), if

Based on the Gram-Schmidt orthogonalization process, the first two blocks V1 and V2 are computed via the formulas

where the coefficients h1,2j−1,…,h2j,2j−1 and h1,2j,…,h2j+1,2j are determined so that the vectors satisfy the F-orthogonality condition

The global extended-rational Arnoldi algorithm is summarized in the following algorithm (Algorithm 1).

The set of shifts {s1,…,sm} is chosen a priori or adaptively during the algorithm. The selection of shifts will be explained later. If all h2j+1,2j−1 and h2j+2,2j are numerically nonzero, then Algorithm 1 determines an F-orthonormal basis V1,…,V2m+2 (Vj∈Rn×p) of the global extended-rational Krylov subspace RKem+1(A,V). Algorithm 1 constructs also an upper block Hessenberg matrix ˜H2m=[hi,j]∈R2(m+1)×2m. We now introduce the 2m×2m matrix given by

Assume that m steps of Algorithm 1 have been run and let ˜T2m=VT2m+2⋄AV2m, then we have the following relations

corresponds to the last two columns of the identity matrix

Using properties of the ⋄-product, we obtain

Which completes the proof.

The next proposition gives the entries of T2m in terms of the recursion coefficients. This will allow us to compute the entries quite efficiently.

, respectively. Then the odd columns are such that

The even columns satisfy the following relations

Multiplying this last equality by (A−s1In) from the left gives

Then the vector AV2 is written as follows

The expression (13) is easily obtained by multiplying AV2j+2 by VT2m+2 with the ⋄-product from the left. This concludes the proof of the proposition.

We notice that if A is a symmetric matrix, then the restriction matrix T2m in (8) reduces to a symmetric and pentadiagonal matrix with the following nontrivial entries,

3 Application to the approximation of matrix functions

Then the expression f(A)V can be approximated by

where P2m(X)=V2m([VT2m⋄X]⊗Ip)∈RKem(A,V) for some X∈Rn×p. The n×2mp matrix V2m=[V1,V2,…,V2m] is the matrix corresponding to the F-orthonormal basis for RKem(A,V) constructed by applying m steps of Algorithm 1 to the pair (A,V). T2m is the projection matrix defined by (8) and e1 corresponds to the first column of the identity matrix I2m.

Let V2m∈Rn×2mp be the matrix generated by Algorithm 1 and let T2m the matrix as defined by (8). Then for any rational function ~r2m∈Π2m/qm we have

In particular, if r2m∈Π2m−1/qm then the global extended-rational Arnoldi approximation is exact, i.e., we have

Following the idea in (Guttel, , Lemma 3.1), we consider q=qm(A)−1V and we first show by induction that

Assertion (18) is obviously true for j=0. Assume that it is true for some j<m. Then by the definition of a extended-rational Krylov space we have P2m(Ajq)=Ajq, and therefore

which establishes (18). By linearity, we obtain

Using the properties of the ⋄-product, we obtain

Replacing VT2m⋄q in (18) completes the proof.

We consider a convex compact set Λ⊂R and we define A(Λ) as the set of analytic functions in a neighborhood of Λ equipped with the uniform norm ∥.∥L∞(Λ) . W(A):={xTAx:x∈Rn,∥x∥=1} will denote the convex hull. In CROUZEIX , it was shown that there exists a universal constant C=1+√2 such that

where B∈Rn×n, with W(B)⊆Λ. Based on this inequality, the following result gives an upper bound for the norm of the error f(A)V−fer2m where fer2m is the approximation given by (15).

Which completes the proof.

which needs to be solved for many values of σ, where B∈Rn×p. The solution X=X(σ) may be written as X=(A−σI)−1B≡f(A)B, with f(z)=(z−σ)−1 is the resolvant function. Then the approximate solutions X2m=X2m(σ)∈Rn×p generated by the global extended-rational algorithm to the pair (A,R0) are obtained as follows

Using (20) relations and the following decomposition

the reduced linear system can be written as

then the approximate solution will be

This equality is equivalent to (15) when f(A)=(A−σIn)−1 corresponds to the resolvent function. In order to find a good choice of shift parameters {s1,…,sm} in the Algorithm 1, we consider the following function

where fm,m=fλ1…,λm,s1,…,sm corresponds to the so-called skeleton approximation introduced in the study of Tyrtyshnikov Tyrtyshnikov , i.e.,

The rational function f2m,m can be expressed as

Observe that ψ(λ,s) is divisible by (λ−s), then there exists a function ϕ such that ψ(λ,s)=(λ−s)ϕ(λ,s). Moreover, ϕ is a polynomial function of degree 2m−1 of each variable. Then f2m,m simplifies to