The giant component of the directed configuration model revisited

We prove a law of large numbers for the order and size of the largest strongly connected component in the directed configuration model. Our result extends previous work by Cooper and Frieze. 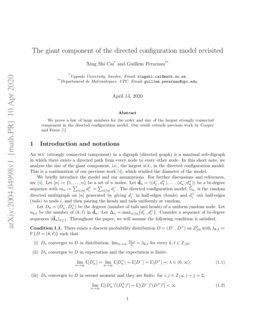 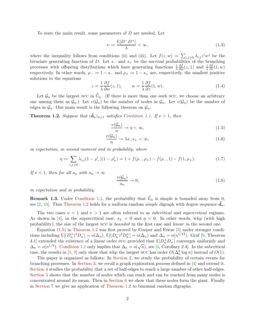 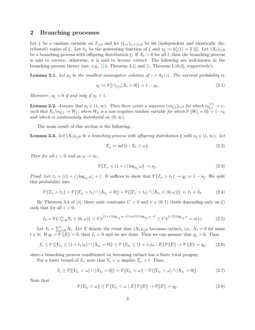 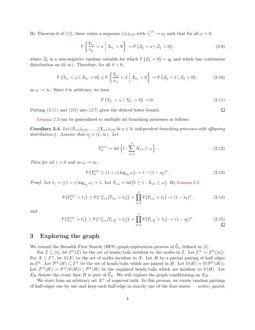 An scc (strongly connected component) in a digraph (directed graph) is a maximal sub-digraph in which there exists a directed path from every node to every other node. In this short note, we analyse the size of the giant component, i.e., the largest scc, in the directed configuration model. This is a continuation of our previous work [4], which studied the diameter of the model.

We briefly introduce the model and our assumptions. For further discussions and references, see [4]. Let [n]\coloneqq{1,…,n} be a set of n nodes. Let →dn=((d−1,d+1),…,(d−n,d+n)) be a bi-degree sequence with mn\coloneqq∑i∈[n]d+i=∑i∈[n]d−i. The directed configuration model, →Gn, is the random directed multigraph on [n] generated by giving d−i in half-edges (heads) and d+i out half-edges (tails) to node i, and then pairing the heads and tails uniformly at random.

Let Dn=(D−n,D+n) be the degrees (number of tails and heads) of a uniform random node. Let nk,ℓ be the number of (k,ℓ) in →dn. Let Δn=maxi∈[n]{d−i,d+i}. Consider a sequence of bi-degree sequences (→dn)n≥1. Throughout the paper, we will assume the following condition is satisfied,

There exists a discrete probability distribution

To state the main result, some parameters of D are needed. Let

where the inequality follows from conditions (ii) and (iii). Let f(z,w)\coloneqq∑i,j≥0λi,jziwj be the bivariate generating function of D. Let s− and s+ be the survival probabilities of the branching processes with offspring distributions which have generating functions 1λ∂f∂w(z,1) and 1λ∂f∂z(1,w) respectively. In other words, ρ−\coloneqq1−s− and ρ+\coloneqq1−s+ are, respectively, the smallest positive solutions to the equations

in expectation, in second moment and in probability, where

in expectation and in probability.

Under 1.1, the probability that →Gn is simple is bounded away from 0, see [2, 10]. Thus 1.2 holds for a uniform random simple digraph with degree sequence →dn.

The two cases ν<1 and ν>1 are often referred to as subcritical and supercritical regimes. As shown in [4], in the supercritical case, s±>0 and η>0. In other words, whp (with high probability), the size of the largest scc is bounded in the first case and linear in the second one.

The paper is organized as follows: In Section 2, we study the probability of certain events for branching processes. In Section 3, we recall a graph exploration process defined in [4] and extend it. Section 4 studies the probability that a set of half-edges to reach a large number of other half-edges. Section 5 shows that the number of nodes which can reach and can be reached from many nodes is concentrated around its mean. Then in Section 6 we show that these nodes form the giant. Finally in Section 7 we give an application of 1.2 to binomial random digraphs.

be a random variable on

Let ρξ be the smallest nonnegative solution of z=hξ(z). The survival probability is

The main result of this section is the following:

Let (Xt)t≥0 be a branching process with offspring distribution ξ with νξ∈(1,∞). Let

Let t1=⌊(1+ε)logνξω⌋+1. It suffices to show that P{Tω>t1}→qξ\coloneqq1−sξ. We split this probability into

since a branching process conditioned on becoming extinct has a finite total progeny.

For a lower bound of I1, note that Yt<ω implies Tω>t. Thus,

where Zξ is a non-negative random variable for which P{Zξ=0}=qξ and which has continuous distribution on (0,∞). Therefore, for all δ>0,

as ω→∞. Since δ is arbitrary, we have

2.3 can be generalized to multiple iid branching processes as follows:

We start from an arbitrary set X+ of unpaired tails. In this process, we create random pairings of half-edges one by one and keep each half-edge in exactly one of the four states — active, paired, fatal or undiscovered. Let A±i, P±i, F±i and U±i denote the set of heads/tails in the four states respectively after the i-th pairing of half-edges. Initially, let

Then set i=1 and proceed as follows:

If it is the last step where a tail at distance t from X+ is paired, then FX+(it) satisfies: (i) the height is t; (ii) the set of actives nodes is the t-th level. We call a rooted forest F incomplete if it satisfies (i)-(ii). We let p(F) be the number of paired nodes in F.

We recall some notation in [4]. The in- and out-size biased distributions of Dn and D are defined

Let sn+, sn−, s+ and s− be the survival probabilities of the branching processes with distribution (Dn)+in, (Dn)−out, D+in and D−out respectively. Then as we have shown in [4], sn±→s±.

Consider the probability distribution Qn\coloneqq(Dn)+in which satisfies for all ℓ≥0,

In [4, Section 3], it has been shown that Qn→D+in in distribution and in expectation. In particular, by (3.4) E[Qn]→E[D+in]=ν. Also in [4], we showed that the exploration process starting from one tail can be approximated by a branching process with offspring distribution Qn. Similarly, the extended exploration process starting from X+ can be approximated by \absX+ independent branching processes with offspring distribution Qn.

where c↓ and c↑ are normalising constants.

Let GW(x)ξ=(GW1,ξ,…,GWx,ξ) be x independent Galton-Watson trees with offspring distribution ξ. Let F=(T1,…,Tx) be an incomplete forest. Let GW(x)ξ≅F denote that for every i∈[x], Ti is a root subtree of GWi,ξ and all paired nodes of Ti have the same degree in GWi,ξ.

The following lemma is a straightforward extension of [4, Lemma 5.3] and we omit its proof:

Let N±t(X±) and N±≤t(X±) be the sets of heads/tails at distance t and at most t from X±⊆E± respectively. From now on, let

Let tω(X±) be the expansion time of X± defined as

Given H a partial pairing of E± and X±⊆E±, we consider the following two events:

The first lemma in this section shows that the probability that both these events happen is close to the survival probability of a branching process.

where we used that ν>0 implies ρ±<1. The lower bound follows from a similar argument. ∎

Our next lemma shows that when \absX+\absX− is small, X+ and X− are unlikely to be too close. We omit the proof since it follows from an easy adaptation of the proof in [4, Proposition 7.2].

We will prove it for X+; a similar argument works for X−. Let

Unsurprisingly, 4.3 can be extended to a fixed number of pairs of head-sets and tail-sets: