In over-parameterized deep neural networks there can be many possible parameter configurations that fit the training data exactly. However, the properties of these interpolating solutions are poorly understood. We argue that over-parameterized neural networks trained with stochastic gradient descent are subject to a Geometric Occam's Razor; that is, these networks are implicitly regularized by the geometric model complexity. For one-dimensional regression, the geometric model complexity is simply given by the arc length of the function. For higher-dimensional settings, the geometric model complexity depends on the Dirichlet energy of the function. We explore the relationship between this Geometric Occam's Razor, the Dirichlet energy and other known forms of implicit regularization. Finally, for ResNets trained on CIFAR-10, we observe that Dirichlet energy measurements are consistent with the action of this implicit Geometric Occam's Razor. 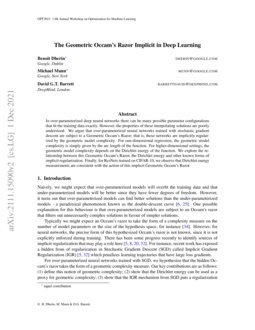 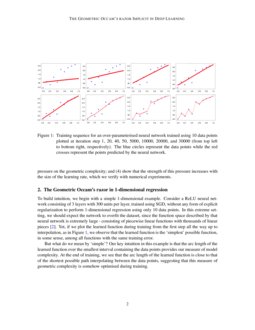 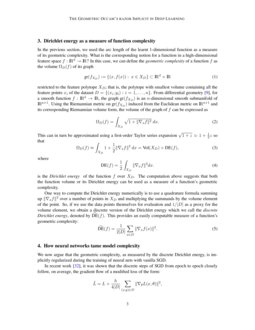 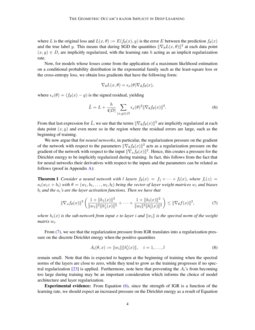 Implicit Regularization in ReLU Networks with the Square Loss

[Belkin (2021), Nakkiran et al. (2020)]. One possible explanation for this behaviour is that over-parameterized models are subject to an Occam’s razor that filters out unnecessarily complex solutions in favour of simpler solutions.

Typically we might expect an Occam’s razor to take the form of a complexity measure on the number of model parameters or the size of the hypothesis space, for instance [Zhang et al. (2017)]. However, for neural networks, the precise form of this hypothesized Occam’s razor is not known, since it is not explicitly enforced during training. There has been some progress recently to identify sources of implicit regularization that may play a role here [Barrett and Dherin (2021), Smith et al. (2021), Ma and Ying (2021), Blanc et al. (2020)]. For instance, recent work has exposed a hidden from of regularization in Stochastic Gradient Descent (SGD) called Implicit Gradient Regularization (IGR) [Barrett and Dherin (2021), Smith et al. (2021)] which penalizes learning trajectories that have large loss gradients.

To build intuition, we begin with a simple 1-dimensional example. Consider a ReLU neural network consisting of 3 layers with 300 units per layer, trained using SGD, without any form of explicit regularization to perform 1-dimensional regression using only 10 data points. In this extreme setting, we should expect the network to overfit the dataset, since the function space described by that neural network is extremely large - consisting of piecewise linear functions with thousands of linear pieces

3 Dirichlet energy as a measure of function complexity

restricted to the feature polytope XD; that is, the polytope with smallest volume containing all the feature points xi of the dataset D={(xi,yi):i=1,…,n}. From differential geometry (do Carmo, 1976), for a smooth function f:IRd→IR, the graph gr(fXD) is an n-dimensional smooth submanifold of IRn+1. Using the Riemannian metric on gr(fXD) induced from the Euclidean metric on IRn+1 and its corresponding Riemannian volume form, the volume of the graph of f can be expressed as

We now argue that the geometric complexity, as measured by the discrete Dirichlet energy, is implicitly regularized during the training of neural nets with vanilla SGD.

, it was shown that the discrete steps of SGD from epoch to epoch closely follow, on average, the gradient flow of a modified loss of the form:

where L is the original loss and L(x,θ):=E(fθ(x),y) is the error E between the prediction fθ(x) and the true label y. This means that during SGD the quantities ∥∇θL(x,θ)∥2 at each data point (x,y)∈D, are implicitly regularized, with the learning rate h acting as an implicit regularization rate.

Now, for models whose losses come from the application of a maximum likelihood estimation on a conditional probability distribution in the exponential family such as the least-square loss or the cross-entropy loss, we obtain loss gradients that have the following form:

where ϵx(θ)=(fθ(x)−y) is the signed residual, yielding

From that last expression for ~L, we see that the terms ∥∇θfθ(x)∥2 are implicitly regularized at each data point (x,y) and even more so in the region where the residual errors are large, such as the beginning of training.

being the vector of layer weight matrices

wi and biases bi and the ai

’s are the layer activation functions. Then we have that

where hi(x) is the sub-network from input x to layer i and ∥wi∥ is the spectral norm of the weight matrix wi.

remain small. Note that this is expected to happen at the beginning of training when the spectral norms of the layers are close to zero, while they tend to grow as the training progresses if no spectral regularization Miyato et al. (2018) is applied. Furthermore, note here that preventing the Ai’s from becoming too large during training may be an important consideration which informs the choice of model architecture and layer regularization.

From Equation equation:resdidual_loss, since the strength of IGR is a function of the learning rate, we should expect an increased pressure on the Dirichlet energy as a result of Equation equation:gradient_relation when training with higher learning rates. We verify this prediction for a ResNet-18 trained to classify CIFAR-10 images. Measuring the discrete Dirichlet energy at the time of maximal test accuracy for a range of learning rates, we observe this predicted behaviour, consistent with our theory; see Figure

Note also that for linear models (i.e., neural networks with a single linear layer), the Dirichlet energy of the network coincides in this case with the L2-norm of the parameters. Therefore, this results recovers the already known fact that linear models trained with SGD have an inductive bias towards low L2-norm solutions (see Zhang et al. (2017)). This also points toward the fact that the Dirichlet energy may be the right generalization of the L2-norm for a general network.

, which is argued to be implicitly minimized by SGD when a random white noise is added to the labels. In Section 3 of

Mescheder et al. (2018), it is argued that explicit gradient regularization with respect to input and noise instance produce similar types of regularization. Altogether, this suggests that feature noise, label noise, and the optimization scheme all conspire to implicitly tame the geometric complexity in the case of neural networks trained with gradient-based optimization schemes. Regularization through the number of layers: In Equation equation:gradient_relation, one sees that each layer contributes an additional positive term, increasing the pressure on the Dirichlet energy. This suggests that the pressure on the model geometric complexity may increase with the neural network depth in a similar spirit as Gao and Jojic (2016). Training of GANs: For GANs, explicit gradient regularization both with respect to the input (Gulrajani et al., 2017; Arbel et al., 2018; Fedus et al., 2018; Kodali et al., 2018; Miyato et al., 2018) and the parameters Rosca et al. (2021); Qin et al. (2020); Balduzzi et al. (2018); Mescheder et al. (2017); Nagarajan and Kolter (2017) has been proven to be beneficial and related to smoothness. Our main theorem provides a way to relate gradient penalties with respect to the input and with respect to the parameters for neural networks, in a way where the spectral norm of the weight matrices plays a key role. This points toward geometric complexity being a useful notion to relate and understand these different forms of regularization (including spectral normalization as in Miyato et al. (2018) and Lin et al. (2021)).

In conclusion, we have found that neural networks trained with SGD are subject to an implicit Geometric Occam’s razor, which selects parameter configurations that have low geometric complexity ahead of configurations with high geometric complexity. This geometric complexity is given by the arc length in 1-dimensinal regression; is linearly related to the Dirichlet energy in higher-dimensional settings; and has many intriguing similarities to other known quantities, including various forms of implicit and explicit regularisation and model complexity. More generally, our work develops promising new theoretical connections between optimization and the geometry of over-parameterised neural networks.

We would like to thank Mihaela Rosca, Maxim Neumann, Yan Wu, Samuel Smith, and Soham De for helpful discussion and feedback. We would also like to thank Patrick Cole and Shakir Mohamed for their support.

Consider a neural network with l layers fθ(x)=f1∘⋯∘fl(x), where fi(z)=ai(wiz+bi) with θ=(w1,b1,…,wl,bl) being the vector of layer weight matrices wi and biases bi and the ai’s are the layer activation functions. We will use the notation fwi or fbi instead of fθ when we want to consider fθ as dependent on the wi’s or bi’s only.

For this model structure and following Pythagoras, we have:

For each layer i, we can rewrite the network function as

In the notation above, for each layer i, we have:

Consider a small perturbation x+δx of the input x. We start by showing that we can always find a corresponding perturbation wi+u(δx) of the weight matrix in layer i such that

Namely, because fwi(x)=gi(wihi(x)+bi), to show this, it is enough to find u(δx) such that

where we identify hi(x+δx) with its linear approximation around x for small δx. Then equation:condition is always satisfied if we set

since hTi(x)hi(x)=∥hi(x)∥2. Now taking the derivative with respect to δx at δx=0

on both sides of Equation equation:equivalence, and using the chain rule and that

u(δx) is linear in δx, we obtain a relation between the network derivative with respect to the weight matrices and w.r.t the input:

Taking the norm on both sides, squaring, and rearranging the terms yields equation:weight_derivative.

Following the same strategy, we now prove a corresponding lemma for the biases at each layer:

In the notation above, for each layer i, we have:

Consider a small perturbation x+δx of the input x. We start again by showing that we can always find a corresponding perturbation bi+u(δx) of the biases in layer i such that

Namely, because fbi(x)=gi(wihi(x)+bi), to show this, it is enough to find u(δx) such that

where we again identify hi(x+δx) with its linear approximation around x for small δx. Then equation:condition2 is always satisfied if we set this time

Now taking the derivative with respect to δx at δx=0 on both sides of Equation equation:equivalence, and using the chain rule and that u(δx) is linear in δx, we obtain a relation between the network derivative w.r.t. the biases and w.r.t the input:

Taking the norm on both sides, squaring, and rearranging the terms yields equation:bias_derivative.

Using this in quality for each layer in the decomposition given by Equation equation:decomposition, we obtain that