In this paper, we study the numerical method for approximating the random periodic solution of semiliear stochastic evolution equations. The main challenge lies in proving a convergence over an infinite time horizon while simulating infinite-dimensional objects. We propose a Galerkin-type exponential integrator scheme and establish its convergence rate of the strong error to the mild solution. 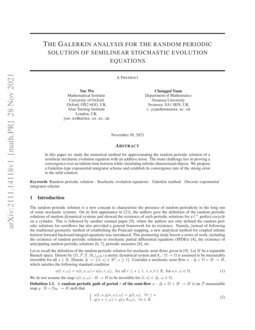 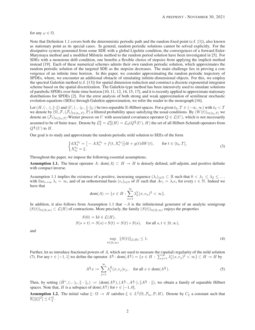 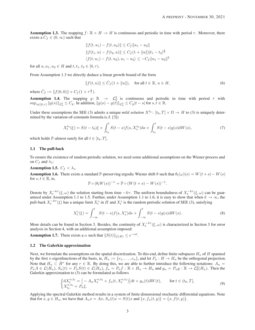 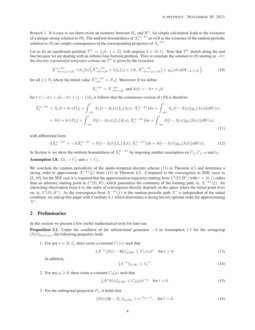 The BDF2-Maruyama Scheme for Stochastic Evolution Equations with Monotone Drift

In this paper we discuss the convergence rate for Galerkin approximation...
Ting Ma, et al. ∙

By and large the behavior of stochastic gradient is regarded as a challe...
Giovanni Bellettini, et al. ∙

Suppose A ∈ℝ^n × n is invertible and we are looking for the solution of ...
Stefan Steinerberger, et al. ∙

This paper addresses the question whether there are numerical schemes fo...
Abhijit Biswas, et al. ∙

Diffraction of acoustic waves by a wedge of point scatterers

This article considers the problem of diffraction by a wedge consisting ...
M. A. Nethercote, et al. ∙

, where the authors not only defined the random periodic solutions for semiflows but also provided a general framework for its existence. Namely, instead of following the traditional geometric method of establishing the Poincaré mapping, a new analytical method for coupled infinite horizon forward-backward integral equations was introduced. This pioneering study boosts a series of work, including the existence of random periodic solutions to stochastic partial differential equations (SPDEs)

Let us recall the definition of the random periodic solution for stochastic semi-flows given in [9]. Let H be a separable Banach space. Denote by (Ω,F,P,(θs)s∈R) a metric dynamical system and θs:Ω→Ω is assumed to be measurably invertible for all s∈R. Denote Δ:={(t,s)∈R2,s≤t}. Consider a stochastic semi-flow u:Δ×Ω×H→H, which satisfies the following standard condition

A random periodic path of period τ of the semi-flow u:Δ×Ω×H→H is an F-measurable map y:R×ΩW→H such that

Note that Definition 1.1 covers both the deterministic periodic path and the random fixed point (c.f. [1]), also known as stationary point as its special cases. In general, random periodic solutions cannot be solved explicitly. For the dissipative system generated from some SDE with a global Lipchitz condition, the convergences of a forward Euler-Marymaya method and a modified Milstein method to the random period solution have been investigated in [5]. For SDEs with a monotone drift condition, one benefits a flexible choice of stepsize from applying the implicit method instead [19]. Each of these numerical schemes admits their own random periodic solution, which approximates the random periodic solution of the targeted SDE as the stepsize decreases. The main challenge lies in proving a convergence of an infinite time horizon. In this paper, we consider approximating the random periodic trajectory of SPDEs, where, we encounter an additional obstacle of simulating infinite-dimensional objects. For this, we employ the spectral Galerkin method (c.f. [13]) for spatial dimension reduction and construct a discrete exponential integrator scheme based on the spatial discretization. The Galerkin-type method has been intensively used to simulate solutions of parabolic SPDEs over finite-time horizon [10, 11, 12, 14, 15, 17], and it is recently applied to approximate stationary distributions for SPDEs [2]. For the error analysis of both strong and weak approximation of semilinear stochastic evolution equations (SEEs) through Galerkin approximation, we refer the reader to the monograph [16].

a filtered probability space satisfying the usual conditions. By

Throughout the paper, we impose the following essential assumptions.

Assumption 1.1 implies the existence of a positive, increasing sequence (λi)i∈N⊂R such that 0<λ1≤λ2≤… with limi→∞λi=∞, and of an orthonormal basis (ei)i∈N of H such that Aei=λiei for every i∈N. Indeed we have that

In addition, it also follows from Assumption 1.1 that −A is the infinitesimal generator of an analytic semigroup (S(t))t∈[0,∞)⊂L(H) of contractions. More precisely, the family (S(t))t∈[0,∞) enjoys the properties

The mapping f:R×H→H is continuous and periodic in time with period τ. Moreover, there exists a Cf∈(0,∞) such that

From Assumption 1.3 we directly deduce a linear growth bound of the form

Under these assumptions the SEE (3) admits a unique mild solution Xt0⋅:[t0,T]×Ω→H to (3) is uniquely determined by the variation-of-constants formula (c.f. [3])

To ensure the existence of random periodic solution, we need some additional assumptions on the Wiener process and on Cf and λ1:

There exists a standard P-preserving ergodic Wiener shift θ such that θt(ω)(s)=W(t+s)−W(s) for s,t∈R, ie,

More details can be found in Section 3. Besides, the continuity of X−kτt(ξ,ω) is characterized in Section 3 for error analysis in Section 4, with an additional assumption imposed:

Next, we formulate the assumptions on the spatial discretization. To this end, define finite subspaces Hn of H spanned by the first neigenfunctions of the basis, ie, Hn:={e1,…,en}, and let Pn:H→Hn be the orthogonal projection. Note that Hn⊂˙Hr for any r∈R. By doing this, we are able to further introduce the following notations: An=PnA∈L(Hn), Sn(t)=PnS(t)∈L(Hn), fn=Pnf:R×Hn→Hn and gn=Png:R→L20(Hn). Then the Galerkin approximation to (3) can be formulated as follows

Applying the spectral Galerkin method results in a system of finite dimensional stochastic differential equations. Note that for x,y∈Hn, we have that Anx=Ax, Sn(t)x=S(t)x and (x,fn(t,y))=(x,f(t,y)).

Let us fix an equidistant partition Th:={jh, j∈Z} with stepsize h∈(0,1). Note that Th stretch along the real line because we are dealing with an infinite time horizon problem. Then to simulate the solution to (9) starting at −kτ, the discrete exponential integrator scheme on Th is given by the recursion

for all j∈N, where the initial value ^Xn,−kτ−kτ=Pnξ. Moreover, if we define

In Section 4, we show the uniform boundedness of ^Xn,−kτt by imposing another assumption on ^Cf,Cf,α and λ1:

We conclude the random periodicity of the spatio-temporal discrete scheme (11) in Theorem 4.1 and determine a strong order to approximate X−kτ⋅(ξ) from (11) in Theorem 4.2. Compared to the convergence in SDE cases in [5, 19], for the SEE case it is required that the approximation trajectory starting from L2(Ω;˙Hr) with r∈(0,1) rather than an arbitrary starting point in L2(Ω;H), which guarantees the continuity of the limiting path, ie, X−kτ⋅(ξ). An interesting observation from it is, the order of convergence directly depends on the space where the initial point lives on, ie, L2(Ω;˙Hr). As the convergence from X−kτ⋅(ξ) to the random periodic path X∗⋅ is independent of the initial condition, we end up this paper with Corollary 4.1 which determines a strong but not optimal order for approximating X∗⋅.

In this section we present a few useful mathematical tools for later use.

Under the condition of the infinitesimal generator −A in Assumption 1.1 for the semigroup (S(t))t∈[0,∞), the following properties hold:

The proof for the first two inequalities can be found in [18]. For the last one, note for any x∈H, we have the decomposition x=∑∞i=1(x,ei)ei. Clearly S(t)(Id−Pn) is a linear operator from H to H. Then the induced norm (indeed we consider its square for convenience) for it is therefore

As one of the main tools, Gamma function is presented:

In the following, we shall show the boundedness of the solution to SEE (3) and characterize its dependence on the initial condition. The proof simply follows Lemma 3.1 and Lemma 3.2 in [19].

For SEE (3) with the given initial condition ξ and satisfying Assumption 1.1 to 1.5, we have

The fist assertion follows Lemma 3.1 in [19]. It remains to justify the second assertion, by bounding each term of (7) in L2(Ω,F−kτ,P;˙Hr) with some constant independent of k and t. For the first term on the right hand side of (7), we have

It remains to estimate the last term of (

7). To achieve it, we shall apply Itô isometry, Assumption 1.7, Proposition 2.1 together with the technique involving Gamma function above:

Assume Assumption 1.1 to 1.5. Denote by X−kτt and Y−kτt two solutions of SPDE (3) with different initial values ξ and η. Then for every ϵ>0, there exists a t≥−kτ such that it holds

With Lemma 3.1, Lemma 3.2 and Assumption 1.6, the existence and uniqueness of the random periodic solution to (3) can be shown following a similar argument in the proof of Theorem 2.4 in [5].

Under Assumption 1.1 to 1.6, there exists a unique random periodic solution X∗(r,⋅)∈L2(Ω;H) such that the solution of (3) satisfies

Note that Theorem 3.1 shows the convergence is regardless of the initial condition ξ, that is, X−kτt(ξ) will converge to the unique random periodic solution no matter where it starts from. This observation is crucial in that one may choose a starting point with preferred properties, for instance, the continuity shown in Lemma 3.3.

One can easily deduce the following expression from the mild form (7):

To get the final assertion, we estimate each term on the right hand in E[∥⋅∥2]. For the first term, we have that

where Proposition 2.1 is applied for the last line. For the second term of (21), by making use of the linear growth of f and Hölder’s inequality, we can easily get

Similarly for the fourth term of (21), through Itô isometry we have that

For the third term of (21), applying Assumption 1.1, Proposition 2.1, and defining θ=1/2 yield the following estimate

where we change variable to deduce the integral in the fourth line and apply Gamma function (17) to get the last line.

For the last term of (21), using Itô isometry and the definition of Gamma function we have that

One will see that the continuity of the true solution in Lemma 3.3 plays an important role in later analysis.

Under Assumption 1.1 to 1.4, for the continuous version of the numerical scheme defined in (11) with stepsize h∈(0,1), there exists a constant Cn, which depends on n, f and σ, such that

For the first term on the right hand side, we have that

where we use the fact (1−e−a)≤a for a>0 to derive the last inequality.

For the second term on the right hand side of (25), we have that

where we apply the Hölder inequality to deduce the second line and make use of the linear growth of f to get the last line.

For the last term on the right hand side of (25), through Itô isometry, Assumption 1.1 and Assumption 1.4 we have that

Under Assumption 1.1 to Assumption 1.4 and Assumption 1.8, consider the solution X−kτ⋅ of SEE (3) with the initial condition ξ and its numerical simulation Xn,−kτ⋅ from (11) with the stepsize h satisfying

Applying Itô formula to e2λt∥^Xn,−kτt(ξ)∥2, where we consider the differential form (12), and taking the expectation yield