The Fundamental Theorem of Natural Selection

Suppose we have n different types of self-replicating entity, with the population P_i of the ith type changing at a rate equal to P_i times the fitness f_i of that type. Suppose the fitness f_i is any continuous function of all the populations P_1, …, P_n. Let p_i be the fraction of replicators that are of the ith type. Then p = (p_1, …, p_n) is a time-dependent probability distribution, and we prove that its speed as measured by the Fisher information metric equals the variance in fitness. In rough terms, this says that the speed at which information is updated through natural selection equals the variance in fitness. This result can be seen as a modified version of Fisher's fundamental theorem of natural selection. We compare it to Fisher's original result as interpreted by Price, Ewens and Edwards. 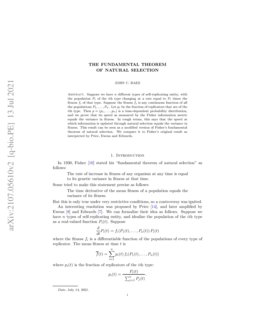 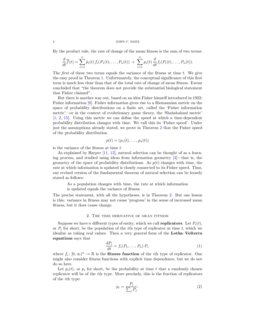 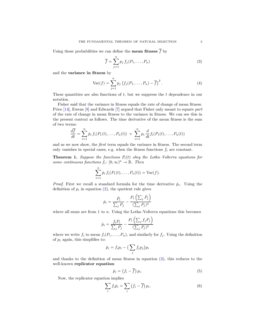 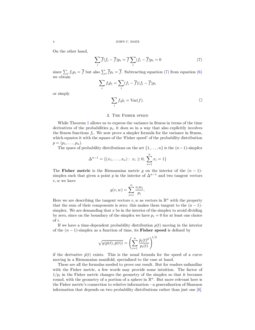 In 1930, Fisher [10] stated his “fundamental theorem of natural selection” as follows:

The rate of increase in fitness of any organism at any time is equal to its genetic variance in fitness at that time.

Some tried to make this statement precise as follows:

The time derivative of the mean fitness of a population equals the variance of its fitness.

But this is only true under very restrictive conditions, so a controversy was ignited.

An interesting resolution was proposed by Price [14], and later amplified by Ewens [8] and Edwards [7]. We can formalize their idea as follows. Suppose we have n types of self-replicating entity, and idealize the population of the ith type as a real-valued function Pi(t). Suppose

where the fitness fi is a differentiable function of the populations of every type of replicator. The mean fitness at time t is

where pi(t) is the fraction of replicators of the ith type:

By the product rule, the rate of change of the mean fitness is the sum of two terms:

The first of these two terms equals the variance of the fitness at time t. We give the easy proof in Theorem 1. Unfortunately, the conceptual significance of this first term is much less clear than that of the total rate of change of mean fitness. Ewens concluded that “the theorem does not provide the substantial biological statement that Fisher claimed”.

But there is another way out, based on an idea Fisher himself introduced in 1922: Fisher information [9]

. Fisher information gives rise to a Riemannian metric on the space of probability distributions on a finite set, called the ‘Fisher information metric’—or in the context of evolutionary game theory, the ‘Shahshahani metric’

is the variance of the fitness at time t.

As explained by Harper [11, 12], natural selection can be thought of as a learning process, and studied using ideas from information geometry [3]—that is, the geometry of the space of probability distributions. As p(t) changes with time, the rate at which information is updated is closely connected to its Fisher speed. Thus, our revised version of the fundamental theorem of natural selection can be loosely stated as follows:

As a population changes with time, the rate at which information is updated equals the variance of fitness.

The precise statement, with all the hypotheses, is in Theorem 2. But one lesson is this: variance in fitness may not cause ‘progress’ in the sense of increased mean fitness, but it does cause change.

2. The time derivative of mean fitness

Suppose we have n different types of entity, which we call replicators. Let Pi(t), or Pi for short, be the population of the ith type of replicator at time t, which we idealize as taking real values. Then a very general form of the Lotka–Volterra equations says that

where fi:[0,∞)n→R is the fitness function of the ith type of replicator. One might also consider fitness functions with explicit time dependence, but we do not do so here.

Using these probabilities we can define the mean fitness ¯¯¯f by

and the variance in fitness by

These quantities are also functions of t, but we suppress the t dependence in our notation.

and as we now show, the first term equals the variance in fitness. The second term only vanishes in special cases, e.g. when the fitness functions fi are constant.

First we recall a standard formula for the time derivative ˙pi. Using the definition of pi in equation (2), the quotient rule gives

where all sums are from 1 to n. Using the Lotka–Volterra equations this becomes

where we write fi to mean fi(P1,…,Pn), and similarly for fj. Using the definition of pi again, this simplifies to:

and thanks to the definition of mean fitness in equation (3), this reduces to the well-known replicator equation:

While Theorem 1 allows us to express the variance in fitness in terms of the time derivatives of the probabilities pi, it does so in a way that also explicitly involves the fitness functions fi. We now prove a simpler formula for the variance in fitness, which equates it with the square of the ‘Fisher speed’ of the probability distribution p=(p1,…,pn).

The space of probability distributions on the set {1,…,n} is the (n−1)-simplex

Here we are describing the tangent vectors v,w as vectors in Rn with the property that the sum of their components is zero: this makes them tangent to the (n−1)-simplex. We are demanding that x be in the interior of the simplex to avoid dividing by zero, since on the boundary of the simplex we have pi=0 for at least one choice of i.

If we have a time-dependent probability distribution p(t) moving in the interior of the (n−1)-simplex as a function of time, its Fisher speed is defined by

if the derivative ˙p(t) exists. This is the usual formula for the speed of a curve moving in a Riemannian manifold, specialized to the case at hand.

These are all the formulas needed to prove our result. But for readers unfamiliar with the Fisher metric, a few words may provide some intuition. The factor of 1/pi in the Fisher metric changes the geometry of the simplex so that it becomes round, with the geometry of a portion of a sphere in Rn. But more relevant here is the Fisher metric’s connection to relative information—a generalization of Shannon information that depends on two probability distributions rather than just one [6]. Given probability distributions p,q∈Δn−1, the information of q relative to p is

. So, sometimes relative information is called the ‘information gain’. It is also called ‘relative entropy’ or ‘Kullback–Leibler divergence’. It has many applications to biology

Suppose p(t) is a smooth curve in the interior of the (n−1)-simplex. We can ask the rate at which information is being updated as time passes. Perhaps surprisingly, an easy calculation gives

Thus, to first order, information is not being updated at all at any time t0∈R. However, another well-known calculation (see e.g. [4]) shows that

So, to second order in t−t0, the square of the Fisher speed determines how much information is updated when we pass from p(t0) to p(t).

Suppose the functions Pi(t) obey the Lotka–Volterra equations for some continuous functions fi:[0,∞)n→R. If none of the Pi(t) are zero, then the square of the Fisher speed of the probability distribution p(t) is the variance of the fitness:

Consider the square of the Fisher speed

and use the replicator equation

The generality of this result is remarkable. Formally, any autonomous system of first-order differential equations

can be rewritten as Lotka–Volterra equations

In general fi is undefined when Pi=0, but this not a problem if we restrict ourselves to situations where all the populations Pi are positive; in these situations Theorems 1 and 2 apply.

This work was supported by the Topos Institute. I thank Marc Harper for his invaluable continued help with this subject, and evolutionary game theory more generally.