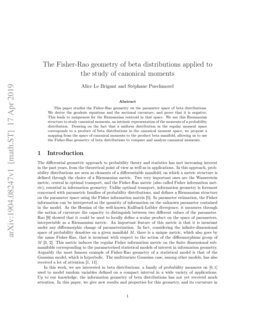 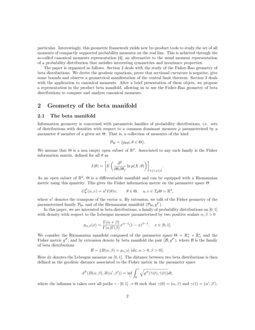 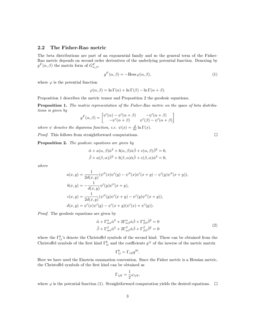 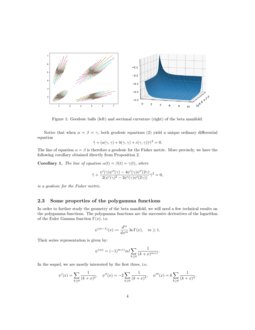 The differential geometric approach to probability theory and statistics has met increasing interest in the past years, from the theoretical point of view as well as in applications. In this approach, probability distributions are seen as elements of a differentiable manifold, on which a metric structure is defined through the choice of a Riemannian metric. Two very important ones are the Wasserstein metric, central in optimal transport, and the Fisher-Rao metric (also called Fisher information metric), essential in information geometry. Unlike optimal transport, information geometry is foremost concerned with parametric families of probability distributions, and defines a Riemannian structure on the parameter space using the Fisher information matrix

. In parameter estimation, the Fisher information can be interpreted as the quantity of information on the unknown parameter contained in the model. As the Hessian of the well-known Kullback-Leibler divergence, it measures through the notion of curvature the capacity to distinguish between two different values of the parameter. Rao

[9] showed that it could be used to locally define a scalar product on the space of parameters, interpretable as a Riemannian metric. An important feature of this metric is that it is invariant under any diffeomorphic change of parameterization. In fact, considering the infinite-dimensional space of probability densities on a given manifold M, there is a unique metric, which also goes by the name Fisher-Rao, that is invariant with respect to the action of the diffeomorphism group of M [3, 2]. This metric induces the regular Fisher information metric on the finite dimensional submanifolds corresponding to the parameterized statistical models of interest in information geometry. Arguably the most famous example of Fisher-Rao geometry of a statistical model is that of the Gaussian model, which is hyperbolic. The multivariate Gaussian case, among other models, has also received a lot of attention [1, 11].

In this work, we are interested in beta distributions, a family of probability measures on [0,1]

used to model random variables defined on a compact interval in a wide variety of applications. Up to our knowledge, the information geometry of beta distributions has not yet received much attention. In this paper, we give new results and properties for this geometry, and its curvature in particular. Interestingly, this geometric framework yields new by-product tools to study the set of all moments of compactly supported probability measures on the real line. This is achieved through the so-called canonical moments representation

[4], an alternative to the usual moment representation of a probability distribution that satisfies interesting symmetries and invariance properties.

The paper is organized as follows. Section 2

deals with the study of the Fisher-Rao geometry of beta distributions. We derive the geodesic equations, prove that sectional curvature is negative, give some bounds and observe a geometrical manifestation of the central limit theorem. Section

2 Geometry of the beta manifold

Information geometry is concerned with parametric families of probability distributions, i.e. sets of distributions with densities with respect to a common dominant measure μ parameterized by a parameter θ member of a given set Θ. That is, a collection of measures of the kind

We assume that Θ is a non empty open subset of Rd. Associated to any such family is the Fisher information matrix, defined for all θ as

As an open subset of Rd, Θ is a differentiable manifold and can be equipped with a Riemannian metric using this quantity. This gives the Fisher information metric on the parameter space Θ

denotes the transpose of the vector

u. By extension, we talk of the Fisher geometry of the parameterized family PΘ, and of the Riemannian manifold (PΘ,gF).

In this paper, we are interested in beta distributions, a family of probability distributions on [0,1] with density with respect to the Lebesgue measure parameterized by two positive scalars α,β>0

We consider the Riemannian manifold composed of the parameter space Θ=R∗+×R∗+ and the Fisher metric gF, and by extension denote by beta manifold the pair (B,gF), where B is the family of beta distributions

Here dx denotes the Lebesgue measure on [0,1]. The distance between two beta distributions is then defined as the geodesic distance associated to the Fisher metric in the parameter space

The beta distributions are part of an exponential family and so the general term of the Fisher-Rao metric depends on second order derivatives of the underlying potential function. Denoting by gF(α,β) the matrix form of GFα,β,

where φ is the potential function

describes the metric tensor and Proposition

This follows from straightforward computations. ∎

The geodesic equations are given by

The geodesic equations are given by

Here we have used the Einstein summation convention. Since the Fisher metric is a Hessian metric, the Christoffel symbols of the first kind can be obtained as

where φ is the potential function (1). Straightforward computation yields the desired equations. ∎

Notice that when α=β=γ, both geodesic equations (2

The line of equation α=β is therefore a geodesic for the Fisher metric. More precisely, we have the following corollary obtained directly from Proposition 2.

is a geodesic for the Fisher metric.

2.3 Some properties of the polygamma functions

Their series representation is given by:

In the sequel, we are mostly interested by the first three, i.e.

and we will use the following equivalents in the neighborhood of zero, given by the first term of their series

In the neighborhood of infinity, we will need the following expansions

2.4 Curvature of the Fisher-Rao metric

In this section, we prove our main result, that is that the sectional curvature of the beta manifold is negative.

The sectional curvature of the Fisher metric is given by:

The sectional curvature of a Hessian metric is given by

Computing the partial derivatives of the potential function φ gives

and the determinant of the metric is given by

Factorizing the numerator by ψ′′(α)ψ′′(β)ψ′′(α+β) yields the desired result. ∎

The asymptotic behavior of the sectional curvature is given by

Moreover, we have the following limits

Let us fix α∈R∗+, and denote x=β the varying parameter of the beta distribution. The asymptotic behavior of the sectional curvature can be obtained by separately examining its numerator and the metric determinant appearing at the denominator

Using a first order Taylor development of ψ′ in α and the equivalent (3), we deduce the following expansion for the determinant around zero

Similarly, writing the numerator of the sectional curvature as

we get the following behavior around zero

This yields the desired expression for the limit of K(α,x) as x→0. Now, in the neighborhood of infinity, the expansions (4) yield the following behavior for the determinant

while an expansion of the numerator gives

yielding again the desired limit for K. Finally, approximating ψ′′′x by 6/x4 when x→0, we get

We can now show the following property.

The sectional curvature is negative and bounded from below.

Recall that in its most factorized form, the sectional curvature is given by

Since ψ′′ is negative, the first factor is negative and so there remains to prove that the function x↦ψ′(x)ψ′′(x) is sub-additive, i.e.

This has been shown recently in [12] (Corollary 4). Now, to show that it is bounded from below, set

k1 and k2 are continuous functions on R∗+, and according to Proposition 4 they have finite limits at the boundaries

Therefore, they are bounded, i.e., there exist negative finite constants M1 and M2 such that for all α∈R∗+,

Setting f(β):=infα∈R∗+K(α,β), notice that f is a continuous function on R∗+ due to the continuity of K in both its variables and the invertibility of the limit and infimum. For this last reason, we also obtain

i.e., f has finite limits at the boundaries and is therefore bounded, in particular from below

The fact that the beta manifold has negative curvature is particularly interesting for the computation of Riemannian centroids such as Fréchet or Karcher means [6, 7]. In general, the Fréchet mean on a Riemannian manifold is not unique. However, when the curvature is negative, there is no cut locus and uniqueness holds. In this context, it is defined for any given sequence of probability measure B1,…,Bn as

This quantity can be computed using a gradient descent algorithm the Karcher flow algorithm.

2.5 A lower bound on the determinant of the metric

The determinant of the metric is the key ingredient to volume computations. In this section, a lower bound of this determinant is computed, which is also its asymptotic value.

The determinant of the information metric matrix admits the following integral representation:

The polygamma function of order n can be expressed as an integral [8] :

The determinant |g(α,β)| expands as:

Using the integral 6, it comes:

The difference ψ′(α)−ψ′(α+β) is thus equal to the laplace transform at α+β of the function:

Using the convolution theorem [10], it comes:

The same procedure can be applied to the integral expression of ψ′(α+β) to obtain:

Building on the integral representation of Proposition 6, it is possible to derive a lower bound for the determinant, which is also its asymptotic value.

The integral expression 12 is rewritten as:

a lower bound for 17 is thus given by:

2.6 A geometric view point of the central limit theorem

The central limit theorem tells us that once re-centered, a beta distribution B(nα,nβ) converges at rate √n

to a centered normal distribution

For a fixed λ>0, the line β=λα corresponds to all the beta distributions of mean 1/(1+λ). Asymptotically, we retrieve a hyperbolic distance between two distributions on this line.

When β=λα for a fixed λ>0, the metric is asymptotically

The infinitesimal element of length is given by

When α→∞, we have asymptotically using (4)