The exact complexity of a Robinson tiling

We find the exact formula for the number of distinct n × n square patterns which appear in a Robinson tiling made of one infinite order supertile. 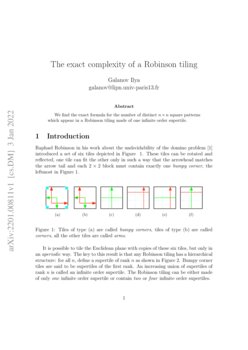 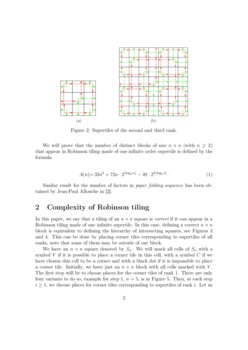 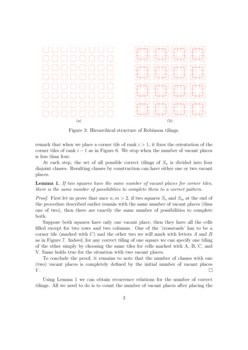 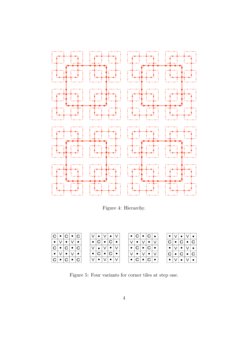 Exact and Fast Inversion of the Approximate Discrete Radon Transform

The exact complexity of the Tutte polynomial

This is a survey on the exact complexity of computing the Tutte polynomi...
Tomer Kotek, et al. ∙

State complexity of the multiples of the Thue-Morse set

The Thue-Morse set is the set of those nonnegative integers whose binary...
Émilie Charlier, et al. ∙

Low-Complexity Tilings of the Plane

A range characterization of the single-quadrant ADRT

Raphael Robinson in his work about the undecidability of the domino problem [???] introduced a set of six tiles depicted in Figure  1. These tiles can be rotated and reflected, one tile can fit the other only in such a way that the arrowhead matches the arrow tail and each 2×2 block must contain exactly one bumpy corner, the leftmost in Figure 1.

Similar result for the number of factors in paper folding sequence has been obtained by Jean-Paul Allouche in [References].

In this paper, we say that a tiling of an n×n square is correct if it can appear in a Robinson tiling made of one infinite supertile. In this case, defining a correct n×n block is equivalent to defining the hierarchy of intersecting squares, see Figures 3 and 4. This can be done by placing corner tiles corresponding to supertiles of all ranks, note that some of them may be outside of our block.

At each step, the set of all possible correct tilings of Sn is divided into four disjoint classes. Resulting classes by construction can have either one or two vacant places.

First let us prove that once n,m>2, if two squares Sn and Sm at the end of the procedure described earlier remain with the same number of vacant places (thus one of two), then there are exactly the same number of possibilities to complete both.

Suppose both squares have only one vacant place, then they have all the cells filled except for two rows and two columns. One of the ’crossroads’ has to be a corner tile (marked with C) and the other two we will mark with letters A and B as in Figure 7. Indeed, for any correct tiling of one square we can specify one tiling of the other simply by choosing the same tiles for cells marked with A, B, C, and V. Same holds true for the situation with two vacant places.

If n=2k is an even number then after the first step we have exactly k×k vacant places for all four possibilities to place first rank corner tiles. By using Lemma 1 we can state that once n>1, the number of all correct tilings of S2n with a corner tile in the position [1,1] is equal to the number of all correct tiling of Sn. The same is true for any other choice at step one, which gives us the first recurrence relation:

is odd number we can write the number of vacant places as follows :

The number of possibilities for last the two options was already denoted by Bn. Now we can write the second recurrence relation:

Values of A1 and B1 can be found by an exhaustive search:

For any Robinson tiling made of one infinite order supertile, once n>1, the number of distinct n×n square blocks is given by

This formula looks very similar to (2). The author believes that the method described in this paper may be modified to prove this conjecture as well as to find other complexity formulas, in particular, for other tilings that have Toeplitz-like structure (see [References]).