The exact chromatic number of the convex segment disjointness graph

Let P be a set of n points in strictly convex position in the plane. Let D_n be the graph whose vertex set is the set of all line segments with endpoints in P, where disjoint segments are adjacent. The chromatic number of this graph was first studied by Araujo, Dumitrescu, Hurtado, Noy, and Urrutia [2005] and then by Dujmović and Wood [2007]. Improving on their estimates, we prove the following exact formula: χ(D_n) = n - √(2n + 14) - 12. 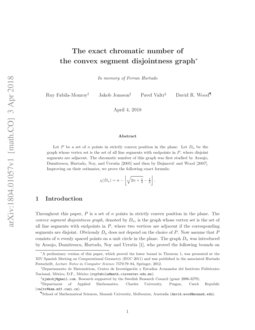 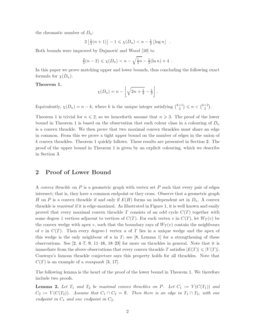 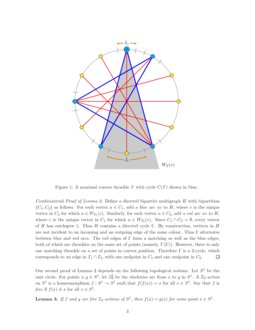 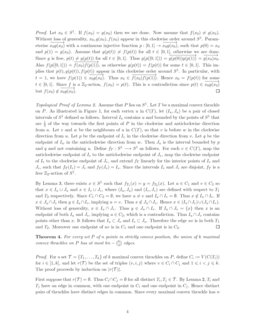 Throughout this paper, P is a set of n points in strictly convex position in the plane. The convex segment disjointness graph, denoted by Dn, is the graph whose vertex set is the set of all line segments with endpoints in P, where two vertices are adjacent if the corresponding segments are disjoint. Obviously Dn does not depend on the choice of P. Now assume that P consists of n evenly spaced points on a unit circle in the plane. The graph Dn was introduced by Araujo, Dumitrescu, Hurtado, Noy and Urrutia [1], who proved the following bounds on the chromatic number of Dn:

Both bounds were improved by Dujmović and Wood [10] to

In this paper we prove matching upper and lower bounds, thus concluding the following exact formula for χ(Dn).

consists of an odd cycle

The following lemma is the heart of the proof of the lower bound in Theorem 1. We therefore include two proofs.

For every set P of n points in strictly convex position, the union of k maximal convex thrackles on P has at most kn−(k2) edges.

First suppose that r(T)=∅. Thus Ci∩Cj=∅ for all distinct Ti,Tj∈T. By Lemma 2, Ti and Tj have an edge in common, with one endpoint in Ci and one endpoint in Cj. Hence distinct pairs of thrackles have distinct edges in common. Since every maximal convex thrackle has n edges and we overcount at least one edge for every pair, the total number of edges is at most kn−(k2).

Now assume that r(T)≠∅. Thus there is a vertex v and a pair of distinct thrackles Ti and Tj, such that v∈Ci∩Cj. We now modify T to create a new set T′ of k convex thrackles, as illustrated in Figure 2. First, replace v by two consecutive vertices v′ and v′′ on P. Then, for each cycle Cℓ with v∈Cℓ and ℓ≠j (which includes Ci), replace v by v′ in Tℓ, and add the edge xv′′ to Tℓ, where x is the vertex in Cℓ for which v′′ is inserted into WTℓ(x). Now, replace v by v′′ in Tj, and add the edge yv′ to Tj, where y is the vertex in Cj for which v′ is inserted into WTℓ(y). Finally, for each cycle Ca with v∉Ca, if z is the vertex in Ca with v∈WTa(z), then replace the edge zv by zv′ and zv′′ in Ta. Let T′ be the resulting set of thrackles. Then (v,i,j)∉r(T′), and every element of r(T′) arises from an element of r(T) (replacing v by v′ or v′′, as appropriate). Thus r(T′)⩽r(T)−1. Since one edge is added to each thrackle, the number of edges in T′ equals the number of edges in T plus k. By induction, T′ has at most k(n+1)−(k2) edges, implying T has at most kn−(k2) edges. ∎

In the language of Dujmović and Wood [10], Theorem 4 says that every n-vertex graph with convex antithickness k has at most kn−(k2) edges.

We now show that Theorem 4 is best possible for all n⩾2k. Let S be a set of k vertices in P with no two consecutive vertices in S. If v∈S and x,v,y are consecutive in this order in P, then Tv:={vw:w∈P∖{v})}∪{xy} is a maximal convex thrackle, and {Tv:v∈S} has exactly kn−(k2) edges in total.

Proof of Lower Bound in Theorem 1.

If χ(Dn)=k then, there are k convex thrackles whose union is the complete geometric graph on P. Possibly add edges to obtain k maximal convex thrackles with (n2) edges in total. By Theorem 4, (n2)⩽kn−(k2). The quadratic formula implies the result. ∎

Label the points of P by 1,2,…,n in clockwise order. Denote by ab the line segment between points a,b∈P with a<b, which is a vertex of Dn. It will be convenient to adopt the matrix convention for indexing rows and columns in Z2. That is, row a is immediately below row a−1, column b is immediately to the right of column b−1, and (a,b) refers to the lattice point in row a and column b. Identify the vertex ab of Dn with the lattice point (a,b) where a<b, which we represent as a unit square in our figures. Define Ωn={(i,j)∈Z2:1⩽i<j⩽n}. We may consider V(Dn)=Ωn represented as a triangle-shaped polyomino as illustrated in Figure 3(a).

We conclude that every independent set S of Dn is a subset of some rectangle of the form [1,r]×[r,n] (with the southwest corner rr removed). Namely, choose (a,b),(c,d)∈S such that a is maximal and d is minimal. Then a′⩽a⩽d⩽b′ for each (a′,b′)∈S. In fact, it is straightforward to show that each maximal independent set forms a path from (1,r) to (r,n) for some r∈{2,…,n−1}, where each step in the path is of the form (i,j)→(i,j+1) or (i,j)→(i+1,j). An example is given in Figure 3(a). Conversely, every such path is a maximal independent set. We refer to such a path as a maximal thrackle path; the corresponding set of line segments forms a maximal convex thrackle, as shown in Figure 3(b).

To summarize, the chromatic number of Dn equals the minimum number of maximal thrackle paths that cover Ωn. For example, Figure 5 shows that it is possible to cover Ω15 with ten thrackle paths. As a consequence, χ(D15)⩽10. Indeed, we have equality by the lower bound in Theorem 1.

For k≥1, define the following intervals:

We now describe an infinite sequence of infinite paths covering the infinite polyomino Ω={(i,j)∈Z2:1⩽i<j}. The final construction for Ωn is then obtained as a restriction of the covering to the set Ωn. For each k≥2 and for each i∈N′k, let Pi be the following path: start at (1,i), walk south to

make one step east to

then walk south to (i,i+1), and finally walk east through all the points in the i-th row.

Now consider the restriction of the paths P1,…,Pn to the triangular polyomino Ωn. Each intersection Pi∩Ωn is a maximal thrackle path in Ωn. Let k be the unique integer satisfying (k+12)⩽n<(k+22). Then the above construction gives a covering of the polyomino Ωn by n−k thrackle paths, since a path Pi exists for each i⩽n, except for the k values i=(22),(32),…,(k+12). The upper bound in Theorem 1 follows.