The Error Probability of Random Fourier Features is Dimensionality Independent

We show that the error probability of reconstructing kernel matrices from Random Fourier Features for any shift-invariant kernel function is at most O((-D)), where D is the number of random features. We also provide a matching information-theoretic method-independent lower bound of Ω((-D)) for standard Gaussian distributions. Compared to prior work, we are the first to show that the error probability for random Fourier features is independent of the dimensionality of data points as well as the size of their domain. As applications of our theory, we obtain dimension-independent bounds for kernel ridge regression and support vector machines. 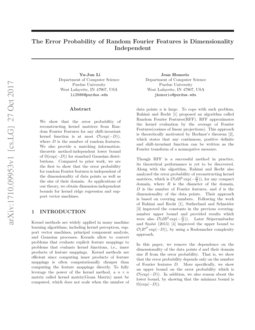 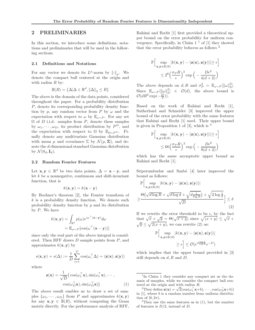 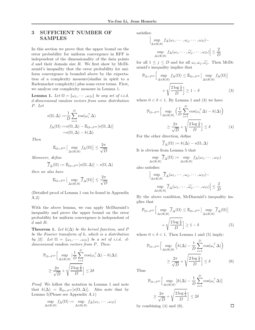 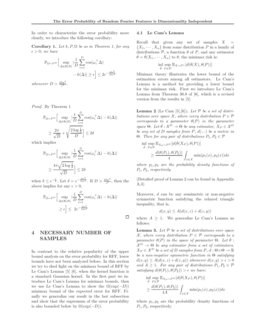 n×n matrix called kernel matrix(Gram Matrix) must be computed, which does not scale when the number of data points n is large. To cope with such problem, Rahimi and Recht [2007] proposed an algorithm called Random Fourier Features (RFF). RFF approximates the kernel evaluation by the average of Fourier Features (cosines of linear projections). This approach is theoretically motivated by Bochner’s theorem [Bochner, 1959]

, which states that any continuous, positive definite and shift-invariant function can be written as the Fourier transform of a nonnegative measure.

Though RFF is a successful method in practice, its theoretical performance is yet to be discovered. Along with the algorithm, Rahimi and Recht [2007] also analyzed the error probability of reconstructing kernel matrices, which is O(dR2exp(−Dd)), for any compact data domain, where R is the domain diameter, D is the number of Fourier features, and d is the dimensionality of the data points. Their approach is based on covering numbers. Following the work of [Rahimi and Recht, 2007], Sutherland and Schneider [2015] improved the constants in the previous covering-number upper bound and provided results which were also O(dR2exp(−Dd)). Later Sriperumbudur and Szabó [2015] proved an upper bound of O(d512dR1024dexp(−D)), by using a Rademacher complexity approach.

for any estimator based on Gaussian linear projections.

R. Thus, in our analysis, we exploit Gaussianity in order to obtain relatively more optimal bounds.

In this section, we introduce some definitions, notations and preliminaries that will be used in the following sections.

For any vector we denote its Lp-norm by ∥⋅∥p. We denote the compact ball centered at the origin and with radius R by:

The above is the domain of the data points, considered throughout the paper. For a probability distribution

Let x,y∈Rd be two data points, Δ=x−y, and let k be a nonnegative, continuous and shift-invariant function, that is

since only the real part of the above integral is considered. Then RFF draws D sample points from P, and approximates k(x,y) by

is a random variable with uniform distribution in

which has the same asymptotic upper bound as [Rahimi and Recht, 2007]. Later Sriperumbudur and Szabó [2015] proved the following upper bound (See Appendix A for more details):

In this section we prove that the upper bound on the error probability for uniform convergence in RFF is independent of the dimensionality of the data points d, and sub-linear with respect to the domain diameter R.

Next, we proceed to bound the expected value of the Lipschitz constant L of f. By linearity of expectation, we have Eα∼N(0D,ID)[∂s(r)]=∂k(r). Therefore:

By optimizing the above with respect to T, we obtain . Finally, by replacing the optimal T back in (3), and by (2) we prove our claim. ∎

In contrast to the relative popularity of the upper bound analysis on the error probability for RFF, lower bounds have not been analyzed before. In this section we try to shed light on the minimax bound for any estimator based on Gaussian linear projections, by using Le Cam’s Lemma [Yu, 1997, Wasserman, 2010]. In the first part we introduce Le Cam’s Lemma for minimax bounds, then we use Le Cam’s Lemma to show the Ω((1−exp(−R2))exp(−D)) minimax bound of the expected error. Finally we generalize our result in the last subsection and show that the supremum of the error probability is also bounded below by Ω((1−exp(−R2))exp(−D)).

Recall that given an observation X drawn from some distribution P in a family of distributions P, a function θ of P, and any estimator ^θ=^θ(X) of θ, the minimax risk is:

Minimax theory illustrates the lower bound of the estimation errors among all estimators. Le Cam’s Lemma is a method for providing a lower bound for the minimax risk. First we introduce Le Cam’s Lemma from Theorem 36.8 of [Wasserman, 2010], which is a revised version from the results in [Yu, 1997]:

where p1,p2 are the probability density functions of P1,P2, respectively.

(Detailed proofs can be found in Appendix B)

Moreover, d can be any semimetric or non-negative symmetric function satisfying the relaxed triangle inequality, which generalizes Le Cam’s Lemma as follows:

where p1,p2 are the probability density functions of P1,P2, respectively.

Le Cam’s Lemma allows for analyzing the minimax bound of estimation errors, which gives us some insight of the lower bound on the estimator. In order to simplify our analysis with Le Cam’s Lemma, we also introduce the following result:

For any two distributions P,Q with support X, we have

where KL(P∥Q) is the KL-divergence from P to Q, and p,q are the probability density functions of P,Q respectively.

4.2 Minimax Bound for the Expected Error

In what follows, we regard the kernel as a parameter of its Fourier transform P, and then show by Le Cam’s Lemma that the minimax bound for such parameter estimation is Ω((1−exp(−R2))exp(−D)). We introduce a function g:R→R that fulfills g(R)≥(1−exp(−R2/2))/2. Furthermore, let αi=ω⊤iΔ be the i-th Gaussian linear projection of the data point Δ. The particular estimator used in practice, studied in Section 3 for the sufficient number of samples can be defined as ^θ(α1,…,αD)=1D∑Dj=1cos(αj). For our analysis of necessary number of samples, we consider any estimator of the form ^θ:RD→R, thus, setting impossibility results beyond the typically used estimator.

where PΔ1,PΔ2∈P. To complete the proof, we will first set KL(PΔ1∥PΔ2)=D/2 and then maximize the expression . Note that PΔ1 and PΔ2

are two multivariate normal distributions, which implies that their KL-divergence is

4.3 Minimax Bound for the Error Probability

In this part we generalize the results in the previous subsection and show that the supremum of the error probability is Ω((1−exp(−R2))exp(−D)) for any estimator based on Gaussian linear projections. Here we introduce a generalization of Theorem 2, based on the generalized Le Cam’s Lemma 2:

The proof follows the proof of Theorem 2 at large. We can regard every αi=ω⊤iΔ as a random variable from N(0,∥Δ∥22) and regard α=(ω⊤1Δ,…,ω⊤DΔ) as a D-dimensional random vector from PΔ:=N(0D,∥Δ∥22ID). We define the family of distributions P:={PΔ}Δ∈B(R). We let the parameter of PΔ∈P be θ(PΔ):=(Eα∼PΔ[cos(α⊤1D)])1D=k(Δ), where the last equality follows from Lemma 5 in Appendix B. We also define a symmetric, nonnegative function

The proof continues as in Theorem 1, by first setting KL(PΔ1∥PΔ2)=D/2 and then maximizing the expression . ∎

In this section, we provide examples of consequences of our theory. In particular, our theory allows for tighter results for the analysis of the expectation of the maximum error, and the sample complexity of kernel ridge regression and support vector machines.

5.1 Expectation of the Maximum Error

Proposition 3 of [Sutherland and Schneider, 2015] shows that when the kernel function k is L-Lipschitz, the expected maximum error of approximation is bounded above by

We improve the above upper bound to be O(R2/3√D), by the following corollary:

where Γ is the Gamma function.

Given a training set of n samples {(xi,yi)}ni=1, kernel matrix K, where kij=k(xi,xj), and the vector kx=(k(x1,x),…,k(xn,x))⊤. As proved in Proposition 9 of [Sutherland and Schneider, 2015], the error probability for kernel ridge regression is bounded above by

is the standard deviation of the values

On the other hand, we reach the same result with less number of features. Let W be Lambert’s W function. From our result in Theorem 1 and (7), we obtain

Now we consider support vector machine(SVM) classifiers. Given a training set of

where C0 is the regularization weight. As proved in Section 3.2 of [Sutherland and Schneider, 2015], if the RFF approximation of the kernel is controlled by ϵ, that is

under which we also have |^h(x)−h(x)|≤O(C0n12ϵ12) with probability at least 1−δ. (The dependence with respect to n can be customarily removed by using the weight C0∈Ω(n−1/2). This relates to scale the squared norm regularization as a function of the number of data points n.)

There are several ways of extending our work. For instance, note that [Rahimi and Recht, 2007, Sutherland and Schneider, 2015, Sriperumbudur and Szabó, 2015] focus on more general shift-invariant kernel functions. In this paper, all results are based on the assumption that the kernel function is Gaussian. Extensions to more general kernel functions can be of interest.

Appendix A Regarding the Bound in [Sriperumbudur and Szabó, 2015]

Theorem 1 of Sriperumbudur and Szabó [2015] proved the following upper bound: