The Equational Approach to CF2 Semantics 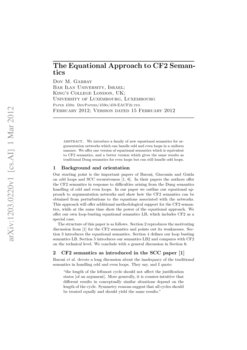 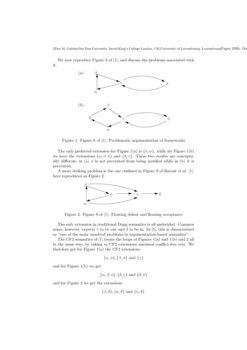 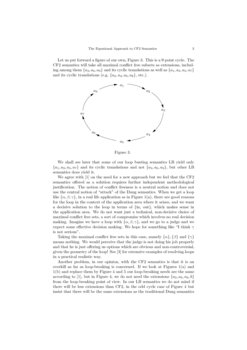 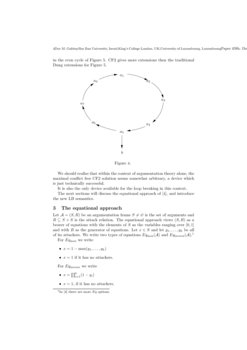 The origin semantics for transducers was proposed in 2014, and led to va...
Sougata Bose, et al. ∙

Based on Grossi and Modgil's recent work [1], this paper considers some ...
Lixing Tan, et al. ∙

Duplicates in data management are common and problematic. In this work, ...
Leopoldo Bertossi, et al. ∙

Our starting point is the important papers of Baroni, Giacomin and Guida on odd loops and SCC recursiveness [1, 6]. In their papers the authors offer the CF2 semantics in response to difficulties arising from the Dung semantics handling of odd and even loops. In our paper we outline our equational approach to argumentation networks and show how the CF2 semantics can be obtained from perturbations to the equations associated with the networks. This approach will offer additional methodological support for the CF2 semantics, while at the same time show the power of the equational approach. We offer our own loop-busting equational semantics LB, which includes CF2 as a special case.

The structure of this paper is as follows. Section 2 reproduces the motivating discussion from [1] for the CF2 semantics and points out its weaknesses. Section 3 introduces the equational semantics. Section 4 defines our loop busting semantics LB. Section 5 introduces our semantics LB2 and compares with CF2 on the technical level. We conclude with a general discussion in Section 6.

Baroni et al. devote a long discussion about the inadequacy of the traditional semantics in handling odd and even loops. They say, and I quote:

“the length of the leftmost cycle should not affect the justification states [of an argument]. More generally, it is counter-intuitive that different results in conceptually similar situations depend on the length of the cycle. Symmetry reasons suggest that all cycles should be treated equally and should yield the same results.”

We now reproduce Figure 8 of [1], and discuss the problems associated with it.

The only preferred extension for Figure 1(a) is {ϕ,α}, while for Figure 1(b) we have the extensions {α,β,ϕ} and {δ,γ}. These two results are conceptually different, in (a) ϕ is not prevented from being justified while in (b) it is prevented.

A more striking problem is the one outlined in Figure 9 of Baroni et al. [1], here reproduced as Figure 2.

The only extension in traditional Dung semantics is all undecided. Common sense, however, expects γ to be out and δ to be in. In [5], this is characterised as “one of the main unsolved problems in argumentation-based semantics”.

The CF2 semantics of [1] treats the loops of Figures 1(a) and 1(b) and 2 all in the same way, by taking as CF2 extensions maximal conflict-free sets. We therefore get for Figure 1(a) the CF2 extensions

and for Figure 2 we get the extensions

We shall see later that some of our loop busting semantics LB yield only {a1,a3,a5,a7} and its cyclic translations and not {a3,a6,a9}, but other LB semantics does yield it.

We agree with [1] on the need for a new approach but we feel that the CF2 semantics offered as a solution requires further independent methodological justification. The notion of conflict freeness is a neutral notion and does not use the central notion of “attack” of the Dung semantics. When we get a loop like {α,β,γ}, in a real life application as in Figure 1(a), there are good reasons for the loop in the context of the application area where it arises, and we want a decisive solution to the loop in terms of {in, out}, which makes sense in the application area. We do not want just a technical, non-decisive choice of maximal conflict free sets, a sort of compromise which involves no real decision making. Imagine we have a loop with {α,β,γ}, and we go to a judge and we expect some effective decision making. We hope for something like “I think γ is not serious”.

Taking the maximal conflict free sets in this case, namely {α},{β} and {γ} means nothing. We would perceive that the judge is not doing his job properly and that he is just offering us options which are obvious and non-controversial, given the geometry of the loop! See [3] for extensive examples of resolving loops in a practical realistic way.

We should realise that within the context of argumentation theory alone, the maximal conflict free CF2 solution seems somewhat arbitrary, a device which is just technically successful.

It is also the only device available for the loop breaking in this context.

The next sections will discuss the equational approach of [4], and introduce the new LB semantics.

Let A=(S,R) be an argumentation frame S≠∅ is the set of arguments and R⊆S×S is the attack relation. The equational approach views (S,R) as a bearer of equations with the elements of S as the variables ranging over [0,1] and with R as the generator of equations. Let x∈S and let y1,…,yk be all of its attackers. We write two types of equations Eqmax(A) and Eqinverse(A).111In [4] there are more Eq options.

We seek solutions f for the above equations. In [4] we prove the following:

In the context of equations, a very natural step to take is to look at Perturbations. If the equations describe a physical or economic system in equilibrium, we want to change the solution a bit (perturb the variables) and see how it affects the system. For example, when we go to the bank to negotiate a mortgage, we start with the amount we want to borrow and indicate for how many years we want the loan and then solve equations that tell us what the monthly payment is going to be. We then might change the amount or the number of years or even negotiate the interest rate if we find the monthly payments too high.

In the equational system arising from an argumentation network we can try and fix the value of some arguments and see what happens. In the equational context, this move is quite natural. We shall see later, that fixing some values to 0 in the equations of Eq(A), amounts to adopting the CF2 semantics, when done in a certain way. When done in other ways it gives the new loop-busting semantics LB.

Consider Figure 2. The equations for this figure are (we use Eqinverse)

The solution here is

Let us perturb the equation by adding an external force which makes a node equal zero. The best analogy I can think of is in electrical networks where you make the voltage of a node 0 by connecting it to earth.

Let Z(x) be the “earth” connection for node x. We now do several perturbations as examples

If we compare these extensions with the CF2 extensions, we see that they are the same.

Let us see what happens with Figure 1(b). Here we have a well behaved even loop. Let us write the equations

Let us do some perturbations:

We now introduce our loop busting semantics, the LB semantics for complete loops. We need a series of concepts leading up to it.

The loops in this figure are many. For example, we list some

[The loop-busting semantics LBM for complete loops] Let A=(S,R) be an argumentation network. Assume that (S,R) is a complete loop, namely that each of its elements belongs to some loop cycle, as defined in item 1 of Definition 0.4. We define the LBM extensions for A as follows.

Note that our definition of extension for a general network will be given in the next section.

Before we prove soundness of LBM relative to the traditional Dung semantics and compare LBM with CF2 semantics, let us do some examples. We use Figures 2 and 1(b).

For each one of these sets we need to modify the equations of Figure 2 and solve them and see what extensions we get. This has already been done in Example 0.3, parts (a), (b) and (c).

Let us now compare with the CF2 extensions for the figure (Figure 2). The maximal conflict free sets of the first loop {α,β,ϕ} are Cα={α},Cβ={β} and Cϕ={ϕ}. They are the same as our loop-busting sets, but they are used differently. They are supposed to be in (i.e. value 1) not out (value 0). We use Cα,Cβ,Cϕ to calculate the CF2 extensions and get {α,δ},{β,δ} and {ϕ,δ}, indeed the same as the LB extensions.

We refer the reader to Example 0.3, where some equational calculations for this figure are carried out.

However, B′ is not minimal absolute. EB′ is a CF2 extension. B′ is a minimal relative set.

Note that if we accept that B′2={δ} is the minimal relative loop-busting set, then the calculated extension for this case is Eδ={δ,ϕ}, in complete agreement with the CF2 semantics!

We now need to demonstrate the soundness of the LB semantics. The perceptive reader will ask himself, how do the LB extensions relate to the extensions of traditional Dung semantics? After all, we start with the standard equational semantics, which for the case of Eqmax is identical with the Dung semantics, but then using a loop-busting set B of one kind or another, we get a new set of equations and call the solutions LB extensions. What are these solutions and what meaning can we give them?

Obviously, we need some sort of soundness result. This is the job of the next theorem.

So we get the same modified equations as required by the LB semantics in Definition 8.

We are also adding Figure 13, describing the situation for B′2={δ} as discussed in Remark 8 in item (b).

0.5 The equational semantics LB and its connection with CF2

We now define the family of LB semantics and identify the loop-busting counterpart of CF2. We need to develop some concepts first. We begin with a high school example.

We present a perturbation protocol for solving equations of the form

We now explain why we use Z in our perturbation. Consider the equations

These equations correspond to a 3-element argumentation loop.

We take the B1={a} and want to execute a perturbation. If we do just substitute a=0, we get a contradiction because the equations prove algebraically through manipulation that

So we need to change the equation governing a. We write xxxx

We cannot any more execute an algebraic manipulation to get a=b=c!

Let us recall Example 0.3, manipulating the equations arising from Figure 2. This is an illustration of our procedure. We used the loop-busting sets Bα={α},Bβ={β} and Bϕ={ϕ}, and followed the procedure as described in Remark 0.5.

Let us now proceed with more concepts leading the way to the full definition of our loop-busting LB semantics.

Furthermore, once we have a set of equations BE, we can perturb it to get a new set of equations EB using some perturbation set B and then from the equations EB get a new argumentation network AEB. The net result of all these steps is that we start with a network B=(S,R) and a perturbation set of nodes B⊆S and we end up with a new network which we can denote by A=BB. If B is a loop-busting set, then A is the loop-busted result of applying B to B.

Let us use the network of Figure 14 to illustrate the process outlined in Remark 0.5. This figure is used extensively in [2] and also quoted in [3].

The variables of this figure are

The equations are, using Eqinverse as follows:

The new equations for a are xxxx

Z(a)=0 or we can simply write xxxx