The entropic barrier is n-self-concordant

For any convex body K ⊆ℝ^n, S. Bubeck and R. Eldan introduced the entropic barrier on K and showed that it is a (1+o(1)) n-self-concordant barrier. In this note, we observe that the optimal bound of n on the self-concordance parameter holds as a consequence of the dimensional Brascamp-Lieb inequality. 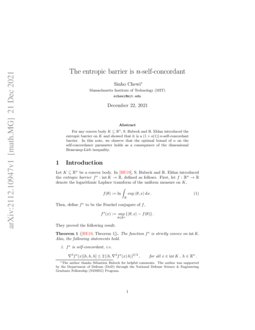 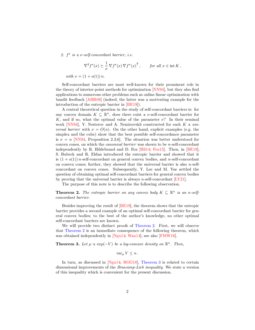 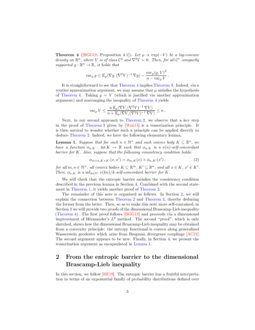 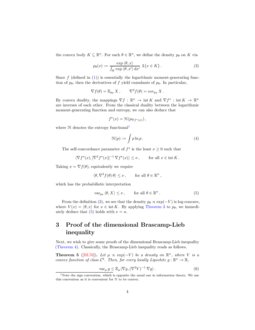 Motivated by the Dikin walk, we develop aspects of an interior-point the...
Aditi Laddha, et al. ∙

It is an open question to determine if the theory of self-concordant bar...
Xavier Allamigeon, et al. ∙

With the rapid growth of threats, sophistication and diversity in the ma...
Tu N. Nguyen, et al. ∙

Then, define f⋆ to be the Fenchel conjugate of f,

They proved the following result.

The function f⋆ is strictly convex on \interiorK. Also, the following statements hold.

Self-concordant barriers are most well-known for their prominent role in the theory of interior-point methods for optimization [nesterov1995interiorpoint], but they also find applications to numerous other problems such as online linear optimization with bandit feedback [abernethy2008banditlinear] (indeed, the latter was a motivating example for the introduction of the entropic barrier in [bubeckeldan2019entropic]).

The purpose of this note is to describe the following observation.

The entropic barrier on any convex body K⊆\Rn is an n-self-concordant barrier.

We will provide two distinct proofs of 2. First, we will observe that 2 is an immediate consequence of the following theorem, which was obtained independently in [nguyen2014dimensionalvariance, wang2014heatcapacity]; see also [fradelizimadimanwang2016infocontent].

Let μ∝exp(−V) be a log-concave density on \Rn. Then,

In turn, as discussed in [nguyen2014dimensionalvariance, bolleygentilguillin2018brascamplieb], 3 is related to certain dimensional improvements of the Brascamp-Lieb inequality. We state a version of this inequality which is convenient for the present discussion.

Let μ∝exp(−V) be a log-concave density on \Rn, where V is of class \mcC2 and ∇2V≻0. Then, for all \mcC1 compactly supported g:\Rn→\R, it holds that

Next, in our second approach to 2, we observe that a key step in the proof of 3 given by [wang2014heatcapacity]

is a tensorization principle. It is then natural to wonder whether such a principle can be applied directly to deduce

2. Indeed, we have the following elementary lemma.

Suppose that for each n∈\N+ and each convex body K⊆\Rn, we have a function ϕn,K:\interiorK→\R such that ϕn,K is a ν(n)-self-concordant barrier for K. Also, suppose that the following consistency condition holds:

We will check that the entropic barrier satisfies the consistency condition described in the previous lemma in Section 4. Combined with the second statement in 1, it yields another proof of 2.

The remainder of this note is organized as follows. In Section 2, we will explain the connection between 2 and 3, thereby deducing the former from the latter. Then, so as to make this note more self-contained, in Section 3 we will provide two proofs of the dimensional Brascamp-Lieb inequality (4). The first proof follows [bolleygentilguillin2018brascamplieb] and proceeds via a dimensional improvement of Hörmander’s L2 method. The second “proof”, which is only sketched, shows how the dimensional Brascamp-Lieb inequality may be obtained from a convexity principle: the entropy functional is convex along generalized Wasserstein geodesics which arise from Bregman divergence couplings [ahnchewi2021mirrorlangevin]. The second argument appears to be new. Finally, in Section 4, we present the tensorization argument as encapsulated in 1.

2 From the entropic barrier to the dimensional Brascamp-Lieb inequality

. The entropic barrier has a fruitful interpretation in terms of an exponential family of probability distributions defined over the convex body

)) is essentially the logarithmic moment-generating function of

pθ, then the derivatives of f yield cumulants of pθ. In particular,

are inverses of each other. From the classical duality between the logarithmic moment-generating function and entropy, we can also deduce that

where \euH denotes the entropy functional222Note the sign convention, which is opposite the usual one in information theory. We use this convention as it is convenient for \euH to be convex.

which has the probabilistic interpretation

From the definition (3), we see that the density pθ∝exp(−V) is log-concave, where V(x)=⟨θ,x⟩ for x∈\interiorK. By applying 3 to pθ, we immediately deduce that (5) holds with ν=n.

3 Proof of the dimensional Brascamp-Lieb inequality

Let μ∝exp(−V) be a density on \Rn, where V is a convex function of class \mcC2. Then, for every locally Lipschitz g:\Rn→\R,

Since the inequality (6) makes no explicit reference to the dimension, it actually holds in infinite-dimensional space. In contrast, 4 asserts that (6) can be improved by subtracting an additional non-negative term from the right-hand side in any finite dimension. This is referred to as a dimensional improvement of the Brascamp-Lieb inequality.

We now present the proof of 4 given in [bolleygentilguillin2018brascamplieb]. The starting point for Hörmander’s L2 method is to first dualize the Poincaré inequality.

be a probability density on

\Rn, where V is of class \mcC1. Define the corresponding generator \msL on smooth functions g:\Rn→\R via

Suppose A:\Rn→\onPD(n) is a matrix-valued function mapping into the space of symmetric positive definite matrices such that for all smooth u:\Rn→\R,

We may assume \Eμg=0. This condition is certainly necessary for the equation \msLu=g to be solvable; in order to streamline the proof, we will assume that a solution u exists. (This assumption can be avoided by invoking [corderoerausquinfradelizimaurey2014bconj] and using a density argument; see [barthecorderoerausquin2013invariances] for details.)

Using the integration by parts formula for the generator,

The key idea now is that the condition (7) can be verified with the help of the curvature of the potential V. Indeed, assume now that V is of class \mcC2 and that ∇2V≻0. By direct calculation, one verifies the commutation relation

where the last equality follows from the integration by parts formula for the generator applied to each coordinate separately: \Eμ⟨∇u,\msL∇u⟩=\Eμ[\norm∇2u2HS]. Since the second term is non-negative, 1 now implies the Brascamp-Lieb inequality (5).

In order to obtain the dimensional improvement of the Brascamp-Lieb inequality (4), we will imitate the proof of 1, only now we will use the additional term \Eμ[\norm∇2u2HS] in the above identity.

As before, let \Eμg=0. However, we introduce an additional trick and consider u not necessarily satisfying \msLu=g; this will help to optimize the bound at the end of the argument. Following the computations in 1 and using the key identity (9), we obtain

For the second term, we use the inequality

From integration by parts,

Observe that this inequality entails \mbV≤n, or else we could send a→∞ and arrive at a contradiction. Optimizing over a, we obtain

3.2 Proof by convexity of the entropy along Bregman divergence couplings

On the other hand, together with K. Ahn in [ahnchewi2021mirrorlangevin], the author obtained the transportation inequality (10) as a consequence of a convexity principle in optimal transport. It is therefore natural to ask whether the dimensional Brascamp-Lieb inequality (4) can be obtained directly from (a strengthening of) this principle. This is indeed the case, and it is the goal of the present section to describe this argument.

Making the argument fully rigorous, however, would entail substantial technical complications which would detract from the focus of this note. In any case, a complete proof of the dimensional Brascamp-Lieb inequality is already present in [bolleygentilguillin2018brascamplieb]. Hence, we will work on a purely formal level and assume that everything is smooth, bounded, etc. Also, the computations are rather similar to the proof of 4 given in the previous section. Nevertheless, the argument seems interesting enough to warrant presenting it here.

The main difference with the preceding proof is that the Bochner formula (implicit in the commutation relation (8)) is replaced by the convexity principle.

Throughout the proof, let ε>0 be small. Let h be bounded and satisfy \Eμh=0, so that με:=(1+εh)μ defines a valid probability density on \Rn. Our aim is to first strengthen the transportation inequality (10), at least infinitesimally, and then to linearize it.

Let (Xε,X) be an optimal coupling for the Bregman divergence coupling cost \euDV(με\mmidμ). In [ahnchewi2021mirrorlangevin], the following facts were proven:

Taking logarithms and expanding to first order in ε,

To interpret this, we introduce a new generator, denoted ^\msL to avoid confusion with the previous section, defined by

This new generator satisfies the integration by parts formula

In this notation, the preceding computations yield

From the second-order expansion of −lndet around In,

Recalling that ∇W2\euH(μ)=∇lnμ, we have established

The next step is to write down the strengthened transportation inequality. Indeed, if we add a suitable additive constant to V so that μ=exp(−V), then

Finally, it remains to linearize the transportation inequality. On one hand, it is classical that

On the other hand, we can guess that

A rigorous proof of this inequality is given as [cordero2017transport, Lemma 3.1].

Actually, choosing a to optimize this inequality and simplifying the resulting expression may be cumbersome, so with our foresight from the earlier proof of 4, we now take a=\mbC/(n−\mbV). After some algebra,

which of course yields

Finally, we check that the tensorization property automatically improves the bound on the self-concordance parameter of f⋆K obtained in [bubeckeldan2019entropic].

and gives the claim. ∎