We explore the impact of long-range memory on the properties of a family of quantum walks in a one-dimensional lattice and discrete time, which can be understood as the quantum version of the classical "Elephant Random Walk" non-Markovian process. This Elephant Quantum Walk is robustly superballistic with the standard deviation showing a constant exponent, σ∝ t^3/ 2 , whatever the quantum coin operator, on which the diffusion coefficient is dependent. On the one hand, this result indicates that contrarily to the classical case, the degree of superdiffusivity in quantum non- Markovian processes of this kind is mainly ruled by the extension of memory rather than other microscopic parameters that explicitly define the process. On the other hand, these parameters reflect on the diffusion coefficient. 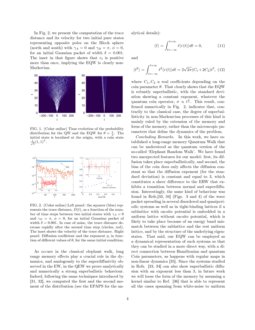 Appendix A Illustration of the random and quantum models

For the quantum case, the rules are basically the same, i.e., at each time step T+1, we have a collection of T displacements that are the outcome of the interaction between the coin and the spin. At time t=1, the evolution operator has into account a possible motion to the left and a possible motion to the right. For t=2, — which defines the state at t=3 — the operator has to take into account the two states of the spin that can be assumed at t=1 and the fact that at t=2 one can have the previous state repeated or flipped so that at a given time T+1 the evolution operator corresponds to a equally weighted superposition — and then the uniform distribution — of each of the T previous operators plus the opposite situation, conjugated with the operator at that time, as indicated by Eq. (7) in the main text.

Appendix B Gaussianity and Diffusion Exponent

Regarding the statistical properties of this process, following the techniques introduced by Brun et al. (2003); Annabestani et al. (2009)

, we can transform the density matrix into a four dimensional column vector in order to use the affine map approach yielding:

where Lk,t is a matrix evolution operator, namely the Limbladian,

Therefore, at each time step, the evolution is fully determined by:

It can be demonstrated that in the limit k→0

where (B1,B2,C1,C2) are positive real depending on the microscopic parameter θ.

Now, exploiting the stationary phase theorem, we can neglect terms like eiωit, with ωi=−ilog(λi), i=1,2,3 , when time goes to infinity,

and in physical space, the above vector finally reads:

whence we can immediately identify a Gaussian for each row.222A Dirac delta is the limit distribution of a Gaussian with the variance going to zero.

From the last result it is possible to compute all of the cumulants of the elephant quantum walk. The first and second moment are now given by:

which corroborates the hyper-ballistic diffusion behavior. Since the distribution is Gaussian, all the other cumulants vanish.