The Effects of Stringent Interventions for Coronavirus Pandemic 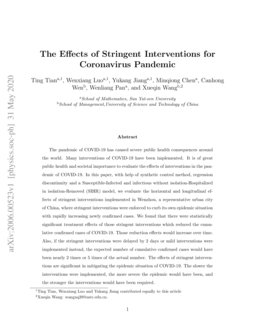 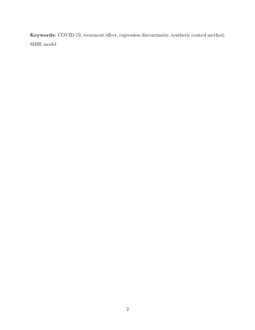 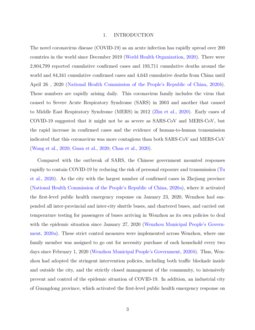 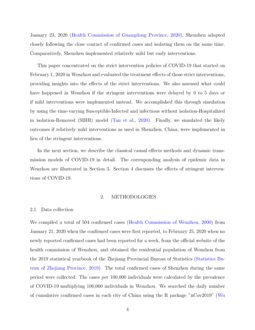 Two Burning Questions on COVID-19: Did shutting down the economy help? Can we (partially) reopen the economy without risking the second wave?

As we reach the apex of the COVID-19 pandemic, the most pressing questio...
Anish Agarwal, et al. ∙

One of the difficulties in monitoring an ongoing pandemic is deciding on...
Ben Swallow, et al. ∙

The novel coronavirus disease (COVID-19) as an acute infection has rapidly spread over 200 countries in the world since December 2019 (World Health Organization, 2020). There were 2,804,799 reported cumulative confirmed cases and 193,711 cumulative deaths around the world and 84,341 cumulative confirmed cases and 4,643 cumulative deaths from China until April 26 , 2020 (National Health Commission of the People’s Republic of China, 2020b). These numbers are rapidly arising daily. This coronavirus family includes the virus that caused to Severe Acute Respiratory Syndrome (SARS) in 2003 and another that caused to Middle East Respiratory Syndrome (MERS) in 2012 (Zhu et al., 2020). Early cases of COVID-19 suggested that it might not be as severe as SARS-CoV and MERS-CoV, but the rapid increase in confirmed cases and the evidence of human-to-human transmission indicated that this coronavirus was more contagious than both SARS-CoV and MERS-CoV (Wang et al., 2020; Guan et al., 2020; Chan et al., 2020).

Compared with the outbreak of SARS, the Chinese government mounted responses rapidly to contain COVID-19 by reducing the risk of personal exposure and transmission (Tu et al., 2020). As the city with the largest number of confirmed cases in Zhejiang province (National Health Commission of the People’s Republic of China, 2020a), where it activated the first-level public health emergency response on January 23, 2020, Wenzhou had suspended all inter-provincial and inter-city shuttle buses, and chartered buses, and carried out temperature testing for passengers of buses arriving in Wenzhou as its own policies to deal with the epidemic situation since January 27, 2020 (Wenzhou Municipal People’s Government, 2020a). These strict control measures were implemented across Wenzhou, where one family member was assigned to go out for necessity purchase of each household every two days since February 1, 2020 (Wenzhou Municipal People’s Government, 2020b). Thus, Wenzhou had adopted the stringent intervention policies, including both traffic blockade inside and outside the city, and the strictly closed management of the community, to intensively prevent and control of the epidemic situation of COVID-19. In addition, an industrial city of Guangdong province, which activated the first-level public health emergency response on January 23, 2020 (Health Commission of Guangdong Province, 2020), Shenzhen adopted closely following the close contact of confirmed cases and isolating them on the same time. Comparatively, Shenzhen implemented relatively mild but early interventions.

In the next section, we describe the classical causal effects methods and dynamic transmission models of COVID-19 in detail. The corresponding analysis of epidemic data in Wenzhou are illustrated in Section 3. Section 4 discusses the effects of stringent interventions of COVID-19.

We compiled a total of 504 confirmed cases (Health Commission of Wenzhou, 2000) from January 21, 2020 when the confirmed cases were first reported, to February 25, 2020 when no newly reported confirmed cases had been reported for a week, from the official website of the health commission of Wenzhou, and obtained the residential population of Wenzhou from the 2019 statistical yearbook of the Zhejiang Provincial Bureau of Statistics (Statistics Bureau of Zhejiang Province, 2019). The total confirmed cases of Shenzhen during the same period were collected. The cases per 100,000 individuals were calculated by the prevalence of COVID-19 multiplying 100,000 individuals in Wenzhou. We searched the daily number of cumulative confirmed cases in each city of China using the R package ”nCov2019” (Wu et al., 2020), and collected the number of cumulative confirmed cases from the top 100 cities for the epidemic of COVID-19 (except Hubei province) on February 25, 2020. The corresponding population density and GDP per capita statistics of these 100 cities were obtained from their latest statistical yearbooks.

, the number of cities demographically similar to Wenzhou, we selected the top 100 cities of cumulative confirmed cases on February 25, 2020 in China (except Hubei province) and used hierarchical clustering

(Ward Jr, 1963) to group those cities based on population density and GDP per capita. A homogenous group including Wenzhou and other J cities were grouped together. Thus, those J cities could be considered as highly resembling to Wenzhou. The sum of weights for each of J cities was 1 and the values of weights in Equation (2.1) were determined by pre-interventions characteristics. The placebo tests were used to identify the magnitude of the treatment effect (i.e. the causal effect of interventions) (Abadie et al., 2010).

where the logarithmic transformation of the daily number of cumulative confirmed cases as a response variable. The values of

t include 1 to 36, representing the number of days starting from January 21, 2020 as a rate variable in Equation (2.2) of RD, for example, the date of February 1 was denoted as 12 of t. h is an indicator variable for the implementation of the strict intervention policies in Wenzhou, given a value of 1 as the implementation of the policies but a value of 0 as no implementation of the policies. This indicates that the values are 0 and 1 before and after February 1, 2020 (including February 1 itself), respectively and the subscript of t indicates the number of days as defined before. c is the number of days corresponding to the cutoff-point whose value is 12, representing the policy implemented on February 1, 2020. The values of k could be denoted as the kth order of interaction effect between rate variable and policy. We compared the kth order of interaction effect item in the Equation (2.2) by AIC.

In RD, to determine whether c is an obvious jump point, the plot of both the rate variable and response variable was used to identify their relationship (Calonico et al., 2015a). Different numbers of bins could be used to divide both the left-hand side and right-hand side of the cutoff-point to small intervals. Thus, the scatter plot of both median values of the rate variable and mean values of the response variable could be drawn (Calonico et al., 2015b). The actual rate variables are weighted uniformly in each bin, and the fitted curves of both the left-hand side and right-hand side are used to examine whether the cutoff-point can be considered as a threshold.

where α0 denotes the maximum transmission rate of COVID-19 during the early outbreak, d represents the time when the interventions start to be effective and the transmission rate starts to decline, m is the duration of a process where the epidemic is to nearly vanish, λm is selected as (2log((1−ε)/ε))/m and ε is specified to be 0.01. The smaller the values of d and m, the earlier effectiveness and the stronger intensity of interventions were implemented, respectively. We simulated the likely outcomes of delaying stringent interventions from 0 to 5 days by changing the values of d and of mild interventions on the same starting time of Wenzhou policies by changing the value of m to Shenzhen policies.

Before the strict interventions were implemented on February 1, 2020, the trends of actual cases per 100,000 in both Wenzhou and ”synthetic Wenzhou” were highly similar, suggesting that this synthetic city can be used to estimate the ”counterfactual” results of Wenzhou. After 2 days of the implementation of the policies, the growth rate of actual cases per 100,000 in Wenzhou remarkably slower than that of ”synthetic Wenzhou”. The number of cases per 100,000 in ”Synthetic Wenzhou” on February 25, 2020 was 10.32, which is 1.69 times the actual Wenzhou (6.08) (Figure 1). In other words, Wenzhou had not implemented the strict interventions on February 1, 2020, the number of cumulative confirmed cases would have reached 954 on February 25, 2020, i.e., the epidemic of COVID-19 in Wenzhou would have expanded to approximately 1.7 times.

A placebo test was performed to determine the significance level of the difference in the trends of COVID-19 cases per 100,000. To this end, we plotted the gap curves between Wenzhou and synthetic Wenzhou by in turn exchanging Wenzhou and one of each 44 cities in the homogenous group of Wenzhou. The gap of COVID-19 cases per 100,000 between Wenzhou and our synthetic Wenzhou was the largest compared to the rest, i.e. the negative effect of the intervention policies on COVID-19 per 100,000 in Wenzhou was the lowest of all. For those 44 cities, the probability of having a gap for Wenzhou under a random permutation of the control measures was

The values of AIC for each regression discontinuity model for different kth order of interaction effects between rate variable and policy were shown in Table 1.

Looking at Table 1, the model included item Policy*Time3 (ht(t−c)3) had the lowest value of AIC but it had more parameters (df=7). Also, the slopes of the fitted curves between the left-hand side and the right-hand side of the cutoff-point were different (Figure 3). The points lied on the right-hand side of quadratic curve. Thus, RD could be used to examine the treatment effect of interventions implemented in Wenzhou and the model included the second order of interaction effects between policy and rate variable was reasonable. The coefficient of interventions is -0.350 (p-value: 0.003) and the interaction effect between interventions and time is -0.438 (p-value: <0.001) indicating that there was a significant treatment effect of highly stringent interventions implemented in Wenzhou on February 1, 2020 (Table 2).

We used daily reported cumulative confirmed case data from January 21 to February 25, 2020 in Wenzhou. By using the synthetic control method, the trend of COVID-19 cases per 100,000 for the synthetic Wenzhou as a control group of no intervention were compared with those for Wenzhou as a treatment group with interventions. The COVID-19 cases per 100,000 in Wenzhou were significantly lower than those in synthetic Wenzhou after February 3, 2020. This indicated that the implementation of the strict interventions on February 1, 2020 in Wenzhou had a significant effect on controlling the epidemic of COVID-19.

The horizontal and longitudinal comparisons were made to examine the treatment effects of the strict intervention policies implemented in Wenzhou, including the suspension of public transportation in the city, the closure of highway junctions, and strict community access control. Since January 21, 2020, compared with other cities outside Hubei province, the number of reported cumulative confirmed cases in Wenzhou had been consistently in the top two places, i.e., its COVID-19 epidemic situation was relatively severe. If strict intervention policies were not implemented, the outbreak of COVID-19 would be expected to expand to 1.7 times. Therefore, it can be concluded from the results of the two methods that the strict intervention policies in Wenzhou, where the epidemic was severe, had significantly suppressed its epidemic situation.