The Effects of Hyperparameters on SGD Training of Neural Networks

The performance of neural network classifiers is determined by a number of hyperparameters, including learning rate, batch size, and depth. A number of attempts have been made to explore these parameters in the literature, and at times, to develop methods for optimizing them. However, exploration of parameter spaces has often been limited. In this note, I report the results of large scale experiments exploring these different parameters and their interactions. 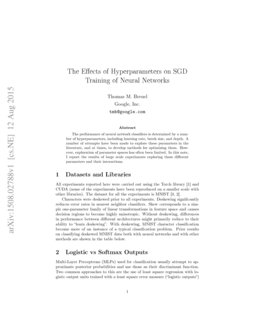 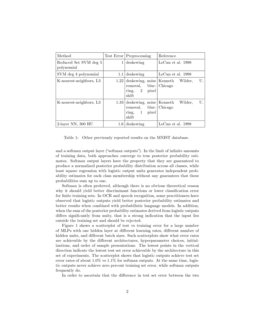 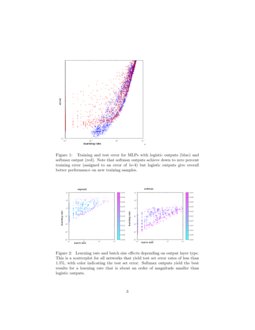 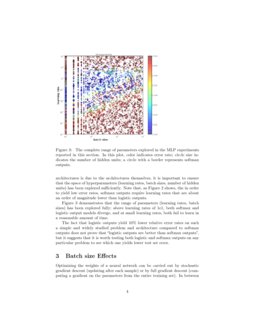 All experiments reported here were carried out using the Torch library

Characters were deskewed prior to all experiments. Deskewing significantly reduces error rates in nearest neighbor classifiers. Skew corresponds to a simple one-parameter family of linear transformations in feature space and causes decision regions to become highly anisotropic. Without deskewing, differences in performance between different architectures might primarily reduce to their ability to “learn deskewing”. With deskewing, MNIST character classification become more of an instance of a typical classification problem. Prior results on classifying deskewed MNIST data both with neural networks and with other methods are shown in the table below.

Softmax is often preferred, although there is no obvious theoretical reason why it should yield better discriminant functions or lower classification error for finite training sets. In OCR and speech recognition, some practitioners have observed that logistic outputs yield better posterior probability estimates and better results when combined with probabilistic language models. In addition, when the sum of the posterior probability estimates derived from logistic outputs differs significantly from unity, that is a strong indication that the input lies outside the training set and should be rejected.

Figure 1 shows a scatterplot of test vs training error for a large number of MLPs with one hidden layer at different learning rates, different number of hidden units, and different batch sizes. Such scatterplots show what error rates are achievable by the different architectures, hyperparameter choices, initializations, and order of sample presentations. The lowest points in the vertical direction indicate the lowest test set error achievable by the architecture in this set of experiments. The scatterplot shows that logistic outputs achieve test set error rates of about 1.0% vs 1.1% for softmax outputs. At the same time, logistic outputs never achieve zero percent training set error, while softmax outputs frequently do.

In order to ascertain that the difference in test set error between the two architectures is due to the architectures themselves, it is important to ensure that the space of hyperparameters (learning rates, batch sizes, number of hidden units) has been explored sufficiently. Note that, as Figure 2 shows, the in order to yield low error rates, softmax outputs require learning rates that are about an order of magnitude lower than logistic outputs.

Figure 3 demonstrates that the range of parameters (learning rates, batch sizes) has been explored fully; above learning rates of 1e1, both softmax and logistic output models diverge, and at small learning rates, both fail to learn in a reasonable amount of time.

Computationally, using batches instead of individual training samples allows for greater parallelism; each layer of an MLP computes effectively a function like:

is some d-dimensional vector, but for batched gradient descent,

x is a d×b dimensional matrix, where b is the batch size. The matrix multiplication M⋅x can be evaluated much more efficiently and in parallel than evaluating b individual matrix-vector products in single-sample updates. In fact, if we use b processors, we can compute updates for b samples in roughly the same time as we would otherwise use for a single sample in SGD.

Figure 4 shows a scatterplot of trained networks with good test set error vs. batch size and learning rate. There are three apparent limits on performance:

The consequence is that, as long as the maximum usable batch normalized learning rate increases proportionally with batch size, we benefit from parallelization in terms of overall speedup of learning. Once we enter the regime where the upper limit of batch normalized learning rates is independent of batch size, further parallelization does not speed up training.

Without further experimentation, we can only guess at the source of the upper limit on the batch-normalized learning rate. As a simplified model, assume that the limit on the learning rate for single sample updates is due to some subset of the input vectors (e.g., vectors that generate particularly large gradients). For batch sizes that contain, on average, only one of those input vectors, we can continue to use the original learning rate, but once we use a batch size that contains, on average, two of those vectors, we have to cut the learning rate in half in order to keep the magnitude of the update within the range that allows convergence. (In practice, we are not necessarily looking at individual samples but subspaces of the input.) This analysis suggests possible strategies for improving training performance with large batch sizes that will be explored elsewhere.

Regardless of the speed of optimization, we can also ask the question of how the test set error of the final network depends on batch size. This is shown in Figure 5. We see that increasing batch size generally results in worse test set errors for both logistic outputs and softmax outputs. The dependence is somewhat stronger for logistic outputs. In addition, logistic outputs appear to yield networks with a higher variability. Note that the differences in error rates in this plot are much smaller than the differences in error rates found in the previous learning rate plots; this plot makes small but significant differences among the very best models visible.

Another popular architectural choice is to replace the sigmoidal nonlinearity in hidden layers with rectifying linear units (ReLU). To explore the effects of this on the results, networks were trained with all four combinations of sigmoid/ReLU hidden units and softmax/sigmoid output units. The scatterplot of results is shown in Figure 9.

Perhaps the most important result from these benchmarks is how complex the interaction between different architectural features and conditions is; performance improvements that can be demonstrated in simple networks do not add up when combined together into the same architecture.

Furthermore, many benchmarks that have been carried out in the literature may have been hampered by limited sets of training conditions. For example, benchmarking logistic vs. softmax outputs at larger batch sizes suggests that there is little difference between the two methods; however, at small batch sizes, logistic outputs significantly outperform softmax outputs on MNIST data (Figure 5). Unless both methods are tested at small batch sizes, the significantly better performance of logistic outputs is not revealed. As a second example, for some architectures, ReLU networks show no batch size dependencies, while other network architectures do show such dependencies.

It is important to remember that the MNIST dataset is not necessarily representative of other classification problems: it has a small number of classes, the prior probability is uniform, the number of training samples is small compared to many other problems, all geometric variability (translations, rotations, skew) has been removed, and the input vectors are binary. Therefore, more important than the results about what works are the result of what unexpectedly doesn’t work well even in such a simple case.

Based on the experiments reported here, we observe:

We note that there has been an extensive literature on various improved optimization methods for neural network learning, methods for learning hyperparameters, and benchmarks of MLP performance. It is impossible to do this literature justice in this technical report. However, a few general observations should suffice: