We propose a deep learning based method, the Deep Ritz Method, for numerically solving variational problems, particularly the ones that arise from partial differential equations. The Deep Ritz method is naturally nonlinear, naturally adaptive and has the potential to work in rather high dimensions. The framework is quite simple and fits well with the stochastic gradient descent method used in deep learning. We illustrate the method on several problems including some eigenvalue problems. 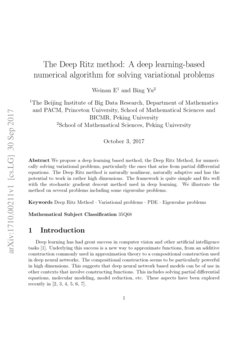 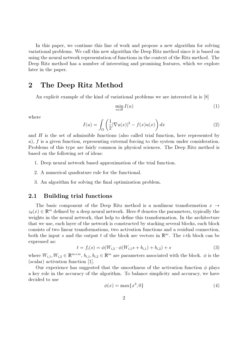 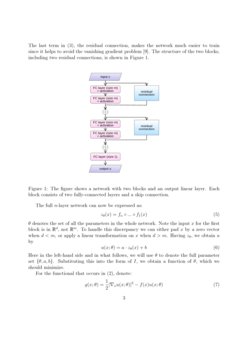 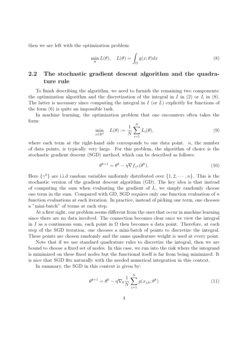 In this article we introduce and study a deep learning based approximati...
Christian Beck, et al. ∙

Although deep-learning has been successfully applied in a variety of sci...
Junsheng Zeng, et al. ∙

In this paper, we propose a semigroup method for solving high-dimensiona...
Haoya Li, et al. ∙

. Underlying this success is a new way to approximate functions, from an additive construction commonly used in approximation theory to a compositional construction used in deep neural networks. The compositional construction seems to be particularly powerful in high dimensions. This suggests that deep neural network based models can be of use in other contexts that involve constructing functions. This includes solving partial differential equations, molecular modeling, model reduction, etc. These aspects have been explored recently in

and H is the set of admissible functions (also called trial function, here represented by u), f is a given function, representing external forcing to the system under consideration. Problems of this type are fairly common in physical sciences. The Deep Ritz method is based on the following set of ideas:

The basic component of the Deep Ritz method is a nonlinear transformation x→zθ(x)∈Rm defined by a deep neural network. Here θ

denotes the parameters, typically the weights in the neural network, that help to define this transformation. In the architecture that we use, each layer of the network is constructed by stacking several blocks, each block consists of two linear transformations, two activation functions and a residual connection, both the input

s and the output t

of the block are vectors in

Rm. The i-th block can be expressed as:

Our experience has suggested that the smoothness of the activation function ϕ plays a key role in the accuracy of the algorithm. To balance simplicity and accuracy, we have decided to use

), the residual connection, makes the network much easier to train since it helps to avoid the vanishing gradient problem

[9]. The structure of the two blocks, including two residual connections, is shown in Figure 1.

The full n-layer network can now be expressed as:

θ denotes the set of all the parameters in the whole network. Note the input x for the first block is in Rd, not Rm

. To handle this discrepancy we can either pad

x by a zero vector when d<m, or apply a linear transformation on x when d>m. Having zθ, we obtain u by

Here in the left-hand side and in what follows, we will use θ to denote the full parameter set {θ,a,b}. Substituting this into the form of I, we obtain a function of θ, which we should minimize.

For the functional that occurs in (2), denote:

then we are left with the optimization problem:

2.2 The stochastic gradient descent algorithm and the quadrature rule

To finish describing the algorithm, we need to furnish the remaining two components: the optimization algorithm and the discretization of the integral in I in (2) or L in (8). The latter is necessary since computing the integral in I (or L) explicitly for functions of the form (6) is quite an impossible task.

In machine learning, the optimization problem that one encounters often takes the form:

where each term at the right-hand side corresponds to one data point. n, the number of data points, is typically very large. For this problem, the algorithm of choice is the stochastic gradient descent (SGD) method, which can be described as follows:

{1,2,⋯,n}. This is the stochastic version of the gradient descent algorithm (GD). The key idea is that instead of computing the sum when evaluating the gradient of L, we simply randomly choose one term in the sum. Compared with GD, SGD requires only one function evaluation of n function evaluations at each iteration. In practice, instead of picking one term, one chooses a ”mini-batch” of terms at each step.

At a first sight, our problem seems different from the ones that occur in machine learning since there are no data involved. The connection becomes clear once we view the integral in I as a continuous sum, each point in Ω then becomes a data point. Therefore, at each step of the SGD iteration, one chooses a mini-batch of points to discretize the integral. These points are chosen randomly and the same quadrature weight is used at every point.

Note that if we use standard quadrature rules to discretize the integral, then we are bound to choose a fixed set of nodes. In this case, we run into the risk where the integrand is minimized on these fixed nodes but the functional itself is far from being minimized. It is nice that SGD fits naturally with the needed numerical integration in this context.

In summary, the SGD in this context is given by:

where for each k, {xj,k} is a set of points in Ω that are randomly sampled with uniform distribution. To accelerate the training of the neural network, we use the Adam optimizer version of the SGD [10].

3.1 The Poisson equation in two dimension

. A simple asymptotic analysis shows that at the origin, the solution behaves as

u(x)=u(r,θ)∼r12sinθ2 [11]. Models of this type have been extensively used to help developing and testing adaptive finite element methods.

The network we used to solve this problem is a stack of four blocks (eight fully-connected layers) and an output layer with m=10. There are a total of 811 parameters in the model. As far as we can tell, this network structure is not special in any way. It is simply the one that we used.

The boundary condition causes some problems. Here for simplicity, we use a penalty method and consider the modified functional

We choose β=500. The results from the Deep Ritz method is shown in see Figure 2(a). For comparison, we also plot the result of the finite difference method with Δx1=Δx2=0.1 (1,681degrees of freedom), see Figure 2(b).

To analyze the error more quantitatively, we consider the following problem

where Ω=(−1,1)×(−1,1)∖[0,1)×{0}. This problem has an explicit solution u∗(x)=r12sinθ2 in polar coordinates. The error e=max|u∗(x)−uh(x)|, where u∗ and uh are the exact and approximate solutions respectively, is shown in Table 1 for both the Deep Ritz method and the finite difference method (on uniform grids). We can see that with fewer parameters, the Deep Ritz method gives more accurate solution than the finite difference method.

Experiences in computer vision and other artificial intelligence tasks suggest that deep learning-based methods are particularly powerful in high dimensions. This has been confirmed by the results of the Deep BSDE method [3]. In this subsection, we investigate the performance of the Deep Ritz method in relatively high dimension.

The solution of this problem is simply u(x)=∑5k=1x2k−1x2k, and we will use the exact solution to compute the error of our model later.

For the network structure, we stack six fully-connected layers with three skip connections and a final linear layer, and there are a total of 671 parameters. For numerical integration, at each step of the SGD iteration, we sample 1,000 points in Ω

and 100 points at each hyperplane that composes

Also shown in Figure 3(b) is the training process for the problem:

3.3 An example with the Neumann boundary condition

The exact solution is u(x)=∑kcos(πxk)

In this case, we can simply use

without any penalty function for the boundary.

With a similar network structure the relative L2 error reaches 1.3% for d=5 and 1.9% for d=10. The training process is shown in Figure 4.

An important component of the training process is the initialization. Here we investigate the benefit of transferring weights in the network when the forcing function f is changed.

The network consists of a stack of 3 blocks with m=10, that is, six fully-connected layers and three residual connections and a final linear transformation layer to obtain u. We show how the error and the weights in the layers change during the training period in Figure 5.

We also transfer the weights from the problem:

Problems of this kind occur often in quantum mechanics where v is the potential function.

There is a well-known variational principle for the smallest eigenvalue:

The functional we minimize here is called the Rayleigh quotient.

To avoid getting the trivial optimizer u=0, instead of using the functional

In practice, we use

One might suggest that with the last penalty term, the denominator in the Rayleigh quotient is no longer necessary. It turns out that we found in practice that this term still helps in two ways: (1) In the presence of this denominator, there is no need to choose a large value of γ. For the harmonic oscillator in d=5, we choose β=2000, γ to be 100 and this seems to be large enough. (2) This term helps to speed up the training process.

To solve this problem, we build a deep neural network much like the Densenet [12]. There are skip connections between every pairwise layers, which help gradients flow through the whole network. The network structure is shown in Figure 6.

The remaining components of the algorithm are very much the same as before.

The problem is then equivalent to solving:

The smallest eigenvalue is λ0=dπ2.

The results of the Deep Ritz method in different dimensions are shown in Table 2.

The potential function in Rd is v(x)=|x|2. For simplicity, we truncate the computational domain from Rd to [−3,3]d. Obviously, there are better strategies, but we leave improvements to later work.

The results in different dimensions are shown in Table 3.

The results deteriorate substantially as the dimension is increased. We believe that there is still a lot of room for improving the results. We will leave this to future work.

We proposed a variational method based on representing the trial functions by deep neural networks. Our limited experience with this method suggests that it has the following advantages:

We also see a number of disadvantages that need to be addressed in future work:

In addition, there are still interesting issues regarding the choice of the network structure, the activation function and the minimization algorithm. The present paper is far from being the last word on the subject.