We propose a new Bayesian nonparametric prior for latent feature models, which we call the convergent Indian buffet process (CIBP). We show that under the CIBP, the number of latent features is distributed as a Poisson distribution with the mean monotonically increasing but converging to a certain value as the number of objects goes to infinity. That is, the expected number of features is bounded above even when the number of objects goes to infinity, unlike the standard Indian buffet process under which the expected number of features increases with the number of objects. We provide two alternative representations of the CIBP based on a hierarchical distribution and a completely random measure, respectively, which are of independent interest. The proposed CIBP is assessed on a high-dimensional sparse factor model. 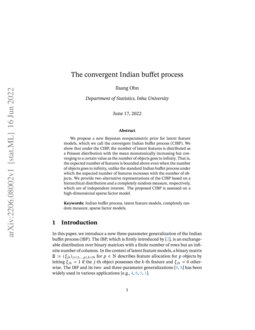 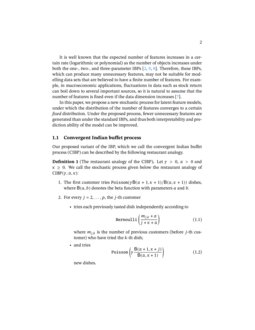 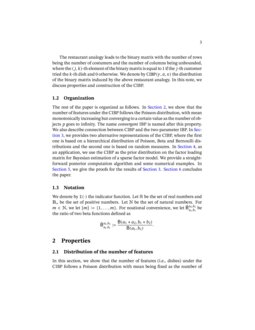 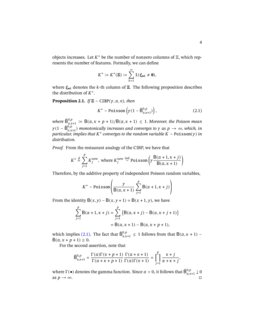 Independent Sets of Random Trees and of Sparse Random Graphs

An independent set of size k in a finite undirected graph G is a set of ...
Steven Heilman, et al. ∙

In this paper, we propose a theoretical analysis of the algorithm ISDE, ...
Louis Pujol, et al. ∙

Super Solutions of the Model RB

Given a lattice L in Z^m and a subset A of R^m, we say that a point in A...
Maximilian Jaroschek, et al. ∙

In this paper, we introduce a new three-parameter generalization of the Indian buffet process (IBP). The IBP, which is firstly introduced by [2], is an exchangeable distribution over binary matrices with a finite number of rows but an infinite number of columns. In the context of latent feature models, a binary matrix Ξ:=(ξjk)j∈{1,…,p},k∈N for p∈N describes feature allocation for p objects by letting ξjk=1 if the j-th object possesses the k-th feature and ξjk=0 otherwise. The IBP and its two- and three-parameter generalizations [9, 8] has been widely used in various applications [e.g., 4, 6, 5, 1].

It is well known that the expected number of features increases in a certain rate (logarithmic or polynomial) as the number of objects increases under both the one-, two-, and three-parameter IBPs [2, 9, 8]. Therefore, these IBPs, which can produce many unnecessary features, may not be suitable for modelling data sets that are believed to have a finite number of features. For example, in macroeconomic applications, fluctuations in data such as stock return can boil down to several important sources, so it is natural to assume that the number of features is fixed even if the data dimension increases [7].

In this paper, we propose a new stochastic process for latent feature models, under which the distribution of the number of features converges to a certain fixed distribution. Under the proposed process, fewer unnecessary features are generated than under the standard IBPs, and thus both interpretability and prediction ability of the model can be improved.

Our proposed variant of the IBP, which we call the convergent Indian buffet process (CIBP) can be described by the following restaurant analogy.

Definition 1 (The restaurant analogy of the CIBP).

Let γ>0, α>0 and κ≥0. We call the stochastic process given below the restaurant analogy of {CIBP}(γ,α,κ):

The rest of the paper is organized as follows. In Section 2, we show that the number of features under the CIBP follows the Poisson distribution, with mean monotonically increasing but converging to a certain value as the number of objects p goes to infinity. The name convergent IBP is named after this property. We also describe connection between CIBP and the two-parameter IBP. In Section 3

, as an application, we use the CIBP as the prior distribution on the factor loading matrix for Bayesian estimation of a sparse factor model. We provide a straightforward posterior computation algorithm and some numerical examples. In

Section 5, we give the proofs for the results of Section 3. Section 6 concludes the paper.

We denote by 1(⋅) the indicator function. Let R be the set of real numbers and R+ be the set of positive numbers. Let N be the set of natural numbers. For m∈N, we let [m]:={1,…,m}. For noational convenience, we let ¯Ba2,b2a1,b1 be the ratio of two beta functions defined as

2.1 Distribution of the number of features

where ξ∙k denotes the k-th column of Ξ. The following proposition describes the distribution of K+.

converges to the random variable

From the restaurant analogy of the CIBP, we have that

Therefore, by the additive property of independent Poisson random variables,

For the second assertion, note that

Exchangeability of the IBP makes corresponding posterior computation algorithms tractable. The CIBP is an exchangeable distribution also, as shown in the following corollary. This is a direct consequence of Proposition 3.1 and Proposition 3.2 which are presented in the next section.

. Then the random vectors

ξ1∙,…,ξp∙ are exchangeable, where ξj∙ denotes the j-th row of the matrix Ξ.

2.3 Connection to the two-parameter IBP

By comparing the restaurant analogies of {CIBP}(γ,α,κ) and {IBP}(ω,κ), we then have the following proposition that connects these two stochastic processes.

We visualize the result of the above propostion. Figure 1 shows four binary matrices generated by {CIBP}(ωκ/α,α,κ) and {IBP}(ω,κ) with ω=5, κ=4 but with α=5, α=1 and α=0.5. We can see that the IBP tends to generate more features than the CIBP.

In this section we show that the CIBP is equivalent to the following hierarchical distribution.

Definition 2 (Hierarchical representation of the CIBP).

. We call the probability distribution given below the hierarchical representation of

To state the result rigorously, we need a concept of lof-equivalence classes. Under the latent feature model, the ordering of the features does not affect the likelihood of the data. Hence, we say that two p×∞ dimensional binary matrices are equivalent if they are identical up to a permutation of columns. It is convenient to choose a representative of every equivalence class by the left-ordering procedure. The left-ordering procedure maps each p×∞ dimensional binary matrix to its left-ordered version whose columns are ordered by the score sk, which is defined by

We introduce useful notations. Let Δ:={0,1}p which is a set of p-dimensional binary vectors and Δ1:=Δ∖{0} where 0 is the vector or zero. For each u∈Δ1, we define

where ξ∙k denotes the k-th column of Ξ. In words, Ku is the number of columns equal to the binary vector u. Note that K+:=∑∞k=11(ξ∙k≠0)=∑u∈Δ1Ku. Moreover, let

be the number of rows that have the k-th feature.

In the next proposition, we provide the explicit form of the probability mass function of the lof-equivalence class

If a p×∞-dimensional random binary matrix Ξ≡(ξjk)j∈[p],k∈N follows the distribution in 3.1, then

From Proposition 3.1, we can show that the restaurant analogy and the hierarchical representation of the CIBP are equivalent.

Suppose that a p×∞-dimensional binary matrix Ξ follow the hierarchical distribution presented in 3.1. Then the lof-equivalence class [Ξ] follows {CIBP}(γ,α,κ).

In this section, we provide another representation of the CIBP, which is based on random measures.

where μ0 is a non-random measure, (ωk)k∈[K] are fixed atoms in Ω, (qk)k∈[K] are independent random variables on R+ and Φ is a Poisson process on R+×Ω. Here we only consider purely-atomic CRMs such that μ0=0. We write

It is well known that the two-parameter IBP, {IBP}(α,κ+1) with α>0 and κ≥0, has the following random measure representation:

We introduce another stochastic process represented by a random measure, which will be shown to be related to the CIBP.

Let γ>0, α>0 and κ≥0. We call the stochastic process given below the random measure representation of {CIBP}(γ,α,κ):

for some smooth probability measure Λ0.

Let ξ1∙,…,ξp∙ be random measures following the distribution given in 3.4

. Then the joint distribution of

The function q↦qα−1(1−q)κ is integrable on [0,1], which means that there would be a finite number of features.

In this section, we consider an application of the CIBP prior distribution to Bayesian estimation of the factor model.

with K<p, B being a p×K factor loading matrix, Z a K-dimensional factor and σ2>0

SSCIBPp(γ,α,κ,τ) prior on B and inverse Gamma prior {IG}(a,b) on σ2. Let K+ be the number of nonzero columns of the loading matrix B. The MCMC algorithm is as follows:

The factor loading βjk is sampled from the conditional posterior

When we sample (ξjk:k∈N), we use the fact that the CIBP is exchangeable to assume that the j-th customer is the last customer to enter the restaurant. Therefore, for each k∈[K∗], ξjk is sampled with probability

where mj,k:=∑l∈[p]:l≠jξlk. We then sample ξjk for each of the infinitely many all-zero columns. To do this, we use the Metropolis–Hastings (MH) steps as follows. We propose K∗j∈N∪{0} and β∗j:=(β∗j,1,…,β∗j,K∗j)∈RK∗j from the proposal distribution

Then we accept the proposal with probability

If the proposal is accepted, we update

The latent variable Zi is sampled from

The noise variance σ2 is sampled from

We conduct simulation to compare the CIBP and the two-parameter IBP when they are used as prior distributions for the sparse factor model.

. The loadings in the sampled nonzero rows are generated from the uniform distribution on

random vectors from the multivariate normal distribution with mean

0 and variance B0(B0)⊤+I independently. We repeat this generating procedure 100 times.

where the second equality follows from reordering the columns such that mk>0 if k≤K+ and mk=0 otherwise. Recall that ¯Ba2,b2a1,b1=B(a1+a2,b1+b2)/B(a1,b1). Therefore, since the cardinality of the lof-equivalence class is |[Ξ]]=K!/∏u∈ΔKu!, the probability of a lof equivalence class of Ξ given K≥K+ is given by

Let pK the probability mass function of {Poisson}(γ), i.e., pK(k):=e−γγk/k! for k∈N. Marginalizing over K, we have that

The summation term of the preceding display can be written as

The proof is by induction. Let ξj∙ be the j-th row of Ξ. For p=1, from a Poisson likelihood, we have

For p≥2, consider the conditional distribution of ξp∙ given ξ1∙,…,ξp−1∙, which is given by