The convergence of the Regula Falsi method

Regula Falsi, or the method of false position, is a numerical method for finding an approximate solution to f(x) = 0 on a finite interval [a, b], where f is a real-valued continuous function on [a, b] and satisfies f(a)f(b) < 0. Previous studies proved the convergence of this method under certain assumptions about the function f, such as both the first and second derivatives of f do not change the sign on the interval [a, b]. In this paper, we remove those assumptions and prove the convergence of the method for all continuous functions. 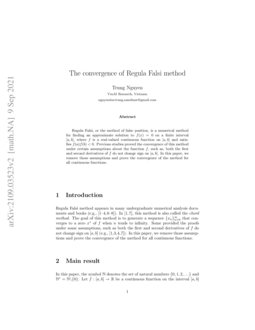 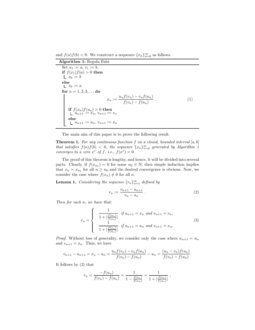 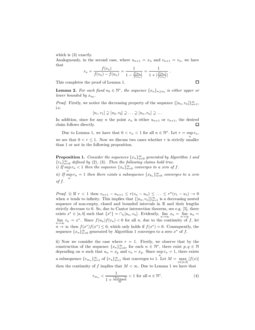 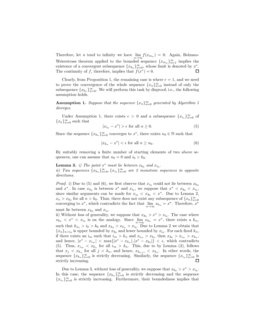 An iterative method for estimation the roots of real-valued functions

Constructing subgradients from directional derivatives for functions of two variables

For any bivariate function that is locally Lipschitz continuous and dire...
Kamil A. Khan, et al. ∙

About some aspects of function interpolation by trigonometric splines

Interpolation of classes of differentiated functions given on a finite i...
Volodymyr Denysiuk, et al. ∙

Regula Falsi method appears in many undergraduate numerical analysis documents and books (e.g., [1, 2, 3, 4, 6, 7, 8]). In [1, 7], this method is also called the chord method. The goal of this method is to generate a sequence {xn}∞n=0 that converges to a zero x∗ of f when n tends to infinity. Some provided the proofs under some assumptions, such as both the first and second derivatives of f do not change sign on [a,b] (e.g., [1, 3, 4, 7]). In this paper, we remove those assumptions and prove the convergence of the method for all continuous functions.

The main aim of this paper is to prove the following result.

The proof of this theorem is lengthy, and hence, it will be divided into several parts. Clearly, if f(xn0)=0 for some n0∈N, then simple induction implies that xn=xn0 for all n≥n0 and the desired convergence is obvious. Now, we consider the case where f(xn)≠0 for all n.

Considering the sequence {rn}∞n=1 defined by

Then for each n, we have that:

Without loss of generality, we consider only the case where un+1=un and vn+1=xn. Thus, we have

which is (3) exactly. Analoguously, in the second case, where un+1=xn and vn+1=vn, we have that

This completes the proof of Lemma 1. ∎

For each fixed n0∈N∗, the sequence {xn}n≥n0 is either upper or lower bounded by xn0.

Firstly, we notice the decreasing property of the sequence {[un,vn]}∞n=1, i.e.

In addition, since for any n the point xn is either un+1 or vn+1, the desired claim follows directly. ∎

Due to Lemma 1, we have that 0<rn<1 for all n∈N∗. Let r=supnrn, we see that 0<r≤1. Now we discuss two cases whether r is strictly smaller than 1 or not in the following proposition.

ii) Now we consider the case where r=1. Firstly, we observe that by the construction of the sequence {xn}∞n=0, for each n∈N∗, there exist p,q∈N depending on n such that un=xp and vn=xq. Since supnrn=1, there exists a subsequence {rmn}∞n=1 of {rn}∞n=1 that converges to 1. Let M=maxx∈[a,b]|f(x)| then the continuity of f implies that M<∞. Due to Lemma 1 we have that

Therefore, let n tend to infinity we have limn→∞f(xmn)=0. Again, Bolzano-Weierstrass theorem applied to the bounded sequence {xmn}∞n=1 implies the existence of a convergent subsequence {xkn}∞n=0, whose limit is denoted by x∗. The continuity of f, therefore, implies that f(x∗)=0. ∎

Clearly, from Proposition 1, the remaining case is where r=1, and we need to prove the convergence of the whole sequence {xn}∞n=0 instead of only the subsequence {xkn}∞n=0. We will perform this task by disproof, i.e., the following assumption holds.

Suppose that the sequence {xn}∞n=0 generated by Algorithm 1 diverges.

Since the sequence {xkn}∞n=0 converges to x∗, there exists n0∈N such that

By suitably removing a finite number of starting elements of two above sequences, one can assume that n0=0 and i0>k0.

i) The point x∗ must lie between xk0 and xi0. ii) Two sequences {xkn}∞n=0,{xin}∞n=0 are 2 monotone sequences in opposite directions.

i) Due to (5) and (6), we first observe that xi0 could not lie between xk0 and x∗. In case xk0 is between x∗ and xi0, we suppose that x∗<xk0<xi0, since similar arguments can be made for xi0<xk0<x∗. Due to Lemma 2, xn>xk0 for all n>k0. Thus, there does not exist any subsequence of {xn}∞n=0 converging to x∗, which contradicts the fact that limn→∞xkn=x∗. Therefore, x∗ must lie between xk0 and xi0. ii) Without loss of generality, we suppose that xk0>x∗>xi0. The case where xk0<x∗<xi0 is on the analogy. Since limn→∞xkn=x∗, there exists a kn1 such that kn1>i0>k0 and xk0>xkn>xi0. Due to Lemma 2 we obtain that {xn}n>i0 is upper bounded by xk0 and lower bounded by xi0. For each fixed kn, if there exists an im such that im>kn and xim>xkn then xk0>xim>xkn, and hence, |x∗−xim|<max{|x∗−xkn|,|x∗−xk0|}<ϵ, which contradicts (5). Thus, xim<xkn for all im>kn. This, due to by Lemma (2), follows that xj<xkn for all j>kn, and hence, xkn+1<xkn. In other words, the sequence {xkn}∞n=0 is strictly decreasing. Similarly, the sequence {xin}∞n=0 is strictly increasing. ∎

Due to Lemma 3, without loss of generality, we suppose that xk0>x∗>xi0. In this case, the sequence {xkn}∞n=0 is strictly decreasing and the sequence {xin}∞n=0 is strictly increasing. Furthermore, their boundedness implies that they converge to some limits. As we know, x∗=limn→∞xkn. Let us denote by y the limit of {xin}∞n=0. Following from (5), for all n, we have xin<x∗−ϵ, and hence, y≤x∗−ϵ<x∗.

i) There does not exist any xn such that y≤xn≤x∗. ii) The subsequences of {xn}∞n=0 belonging to the intervals [xi0,y) and (x∗,xk0] are the strictly monotone. Moreover, they converge to y and x∗ respectively.

Making use of Lemma 4, for notational convernience, from now we use the notations {xin}∞n=0 and {xkn}∞n=0 to denote the subsequences of {xn}∞n=0 lying within [xi0,y) and (x∗,xk0], respectively. Notice that, due to Lemma 4, we have

ii) Firstly, due to the fact that limn→∞xin=limn→∞uin=y, limn→∞xkn=limn→∞vkn=x∗, we see that for large enough n, the following inequality holds.

Now, we point out a sub-sequence of the sequence {xn}∞n=0 such that its image under the function |f| is strictly increasing. Firstly, denote by χ:=χ(x∗,xk0]

the characteristic function of the interval

To sum up, if q<p are two consecutive jumps then |f(xq)|<|f(xp)|. Let us denote by {jn}∞n=0 the sequence of jumps. Since some large enough n0, the sequence {|f(xjn)|}∞n=n0 is strictly increasing. This contradicts to (7), and therefore, implies that Assumption 1 is wrong. This completes the proof of Theorem 1.

In this paper, we prove the convergence of Regula Falsi method for all continuous functions. In the future, it is of great interest to provide theoretical proofs about the convergence rate of the method.