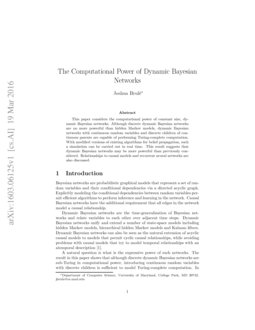 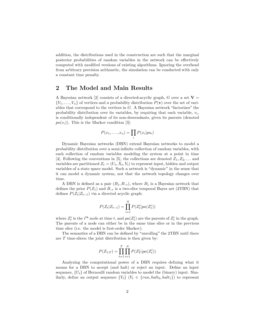 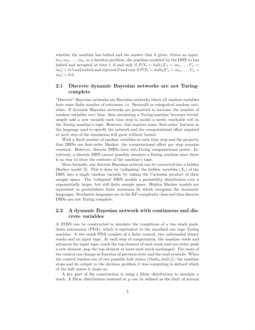 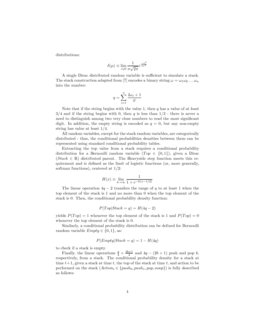 Bayesian networks are probabilistic graphical models that represent a set of random variables and their conditional dependencies via a directed acyclic graph. Explicitly modeling the conditional dependencies between random variables permit efficient algorithms to perform inference and learning in the network. Causal Bayesian networks have the additional requirement that all edges in the network model a causal relationship.

A natural question is what is the expressive power of such networks. The result in this paper shows that although discrete dynamic Bayesian networks are sub-Turing in computational power, introducing continuous random variables with discrete children is sufficient to model Turing-complete computation. In addition, the distributions used in the construction are such that the marginal posterior probabilities of random variables in the network can be effectively computed with modified versions of existing algorithms. Ignoring the overhead from arbitrary precision arithmetic, the simulation can be conducted with only a constant time penalty.

2 The Model and Main Results

A Bayesian network [2] consists of a directed-acyclic graph, G over a set V={V1,…,Vn}

of vertices and a probability distribution

P(v) over the set of variables that correspond to the vertices in G. A Bayesian network “factorizes” the probability distribution over its variables, by requiring that each variable, vi, is conditionally independent of its non-descendants, given its parents (denoted pa(vi)). This is the Markov condition [3]:

Dynamic Bayesian networks (DBN) extend Bayesian networks to model a probability distribution over a semi-infinite collection of random variables, with each collection of random variables modeling the system at a point in time [4]. Following the conventions in [5], the collections are denoted Z1,Z2,… and variables are partitioned Zt=(Ut,Xt,Yt) to represent input, hidden and output variables of a state space model. Such a network is “dynamic” in the sense that it can model a dynamic system, not that the network topology changes over time.

A DBN is defined as a pair (B1,B→), where B1 is a Bayesian network that defines the prior P(Z1) and B→ is a two-slice temporal Bayes net (2TBN) that defines P(Zt|Zt−1) via a directed acyclic graph:

where Zit is the ith node at time t, and pa(Zit) are the parents of Zit in the graph. The parents of a node can either be in the same time slice or in the previous time slice (i.e. the model is first-order Markov).

time-slices; the joint distribution is then given by:

Analyzing the computational power of a DBN requires defining what it means for a DBN to accept (and halt) or reject an input. Define an input sequence, {Ut} of Bernoulli random variables to model the (binary) input. Similarly, define an output sequence {Yt} (Yt∈{run,halt0,halt1}) to represent whether the machine has halted and the answer that it gives. Given an input, in1,in2,…,int, to a decision problem, the machine modeled by the DBN to has halted and accepted at time t, if and only if P(Yt=halt1|U1=in1,…,Un=int)>0.5 and halted and rejected if and only if P(Yt=halt0|U1=in1,…,Un=int)>0.5.

each step of the simulation will grow without bound.

With a fixed number of random variables at each time step and the property that DBNs are first-order Markov, the computational effort per step remains constant. However, discrete DBNs have sub-Turing computational power. Intuitively, a discrete DBN cannot possibly simulate a Turing machine since there is no way to store the contents of the machine’s tape.

More formally, any discrete Bayesian network can be converted into a hidden Markov model [5]. This is done by ‘collapsing’ the hidden variables (Xt) of the DBN into a single random variable by taking the Cartesian product of their sample space. The ‘collapsed’ DBN models a probability distribution over a exponentially larger, but still finite sample space. Hidden Markov models are equivalent to probabilistic finite automata [6] which recognize the stochastic languages. Stochastic languages are in the RP-complexity class and thus discrete DBNs are not Turing complete.

2.2 A dynamic Bayesian network with continuous and discrete variables

A 2TBN can be constructed to simulate the transitions of a two stack push-down automaton (PDA), which is equivalent to the standard one tape Turing machine. A two stack PDA consists of a finite control, two unbounded binary stacks and an input tape. At each step of computation, the machine reads and advances the input tape, reads the top element of each stack and can either push a new element, pop the top element or leave each stack unchanged. The state of the control can change as function of previous state and the read symbols. When the control reaches one of two possible halt states ({halt0,halt1}), the machine stops and its output to the decision problem it was computing is defined which of the halt states it stops on.

can be defined as the limit of normal distributions:

A single Dirac distributed random variable is sufficient to simulate a stack. The stack construction adapted from [7] encodes a binary string ω=ω1ω2…ωn into the number:

Top∈{0,1}), given a Dirac (Stack∈R) distributed parent. The Heavyside step function meets this requirement and is defined as the limit of logistic functions (or, more generally, softmax functions), centered at 1/2:

when the top element of the stack is 0. Then, the conditional probability density function:

Similarly, a conditional probability distribution can be defined for Bernoulli random variable Empty∈{0,1}, as:

to check if a stack is empty.

Since there are two stacks in the full construction, they are labeled, at time t, as Stacka,t and Stackb,t. The rest of the construction is straightforward. Statet, Actiona and Actionb are functions of Statet−1,Topa,t,Emptya,t,Topb,t,Emptyb,t and int

. Since all of these are discrete random variables, the conditional probability densities is simply the transition function of the PDA, written as a (0, 1) stochastic matrix. As expected

P(Y=halti|State)=1 if State is that halt state, and 0 otherwise.

Finally, the priors for the dynamic Bayesian network are simply P(Stacka,1)=P(Stackb,1)=δ(0), P(State1=q0)=1, where q0 is the initial state.

Like Lauritzen’s algorithm, Lerner’s algorithm computes approximate posterior marginals - relying on the observation that the product of a softmax and a Gaussian is approximately Gaussian - but exact first and second moments, up to errors in the numerical integration used to compute the best Gaussian approximation of the product of a Gaussian and a softmax. This calculation is actually simpler in the case where the softmax is replaced with a Heavyside and the Lerner algorithm can run essentially unmodified with a mixture of Heavyside and softmax conditional probability densities. In the case of Dirac-distributed parents, with Heavyside conditional probability densities, numeric integration is unnecessary and no errors are introduced in computing the first and second moments of the posterior distribution.

[12]. In summary: posterior marginals for the Turing machine simulation can be computed exactly, using a modified version of the Lerner algorithm when restricted to Dirac distributed continuous random variables with Heavside conditional probability densities. If Gaussian random variables and softmax conditional probability densities are also introduced, then the first and second moments of the posterior marginals can be computed ‘exactly’, up to errors in numerical integration, although this will slowly degrade the quality of the Turing machine simulation in later time steps.

Inference in Bayesian networks is NP-hard [13]. However, assuming that arithmetic operations can be computed in unit time over arbitrary-precision numbers (e.g. the real RAM model), the work necessary at each time step is constant. Thus, dynamic Bayesian networks can simulate Turing-machines with only a constant time overhead in the real RAM model, and slowdown proportional to the time complexity of arbitrary precision arithmetic otherwise.

There is an interesting gap in decidability - it takes very little to turn a sub-Turing framework for modeling into a Turing-complete one. In the case of neural networks, a single recurrent layer, with arbitrary-precision rational weights and a saturating linear transfer function is sufficient. With dynamic Bayesian networks, two time-slices, continuous-valued random variables with a combination of linear and step function conditional probability densities is sufficient.

Although such a simple recurrent neural network is theoretically capable of performing arbitrary computations, practical extensions include higher-order connections, [18]

[19], and even connections to an ‘external’ Turing machine [20]. These additions enrich the capabilities of standard neural networks and make it easier to train them for complex algorithmic tasks.

I would like to thank James Reggia, William Gasarch and Brendan Good for their discussions and helpful comments on early drafts of this paper.