The computation of first order moments on junction trees 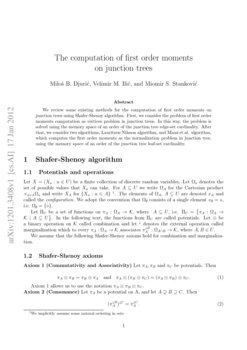 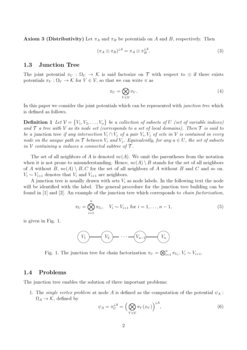 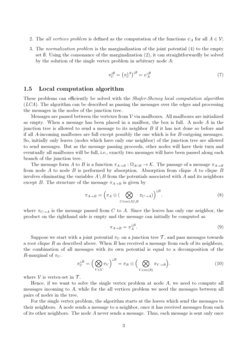 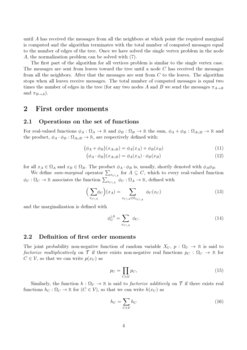 Transversals of Longest Cycles in Partial k-Trees and Chordal Graphs

Let lct(G) be the minimum cardinality of a set of vertices that intersec...
Juan Gutiérrez, et al. ∙

Sketching the order of events

An algorithm to efficiently compute the moments of volumetric images is ...
William Diggin, et al. ∙

be a finite collection of discrete random variables. Let

Ωu denotes the set of possible values that Xu can take. For A⊆U we write ΩA for the Cartesian product ×u∈AΩu and write XA for {Xu:u∈A} 111We implicitly assume some natural ordering in sets. The elements of ΩA, A⊆U are denoted xA and called the configuration. We adopt the convention that Ω∅ consists of a single element x∅=⋄, i.e. Ω∅={⋄}.

Let ΠU be a set of functions on πA:ΩA→K, where  A⊆U, i.e. ΠU={πA:ΩA→K | A⊆U}. In the following text, the functions from ΠU are called potentials. Let ⊗ be a binary operation on K called combination and let ↓ denotes the external operation called marginalization which to every πA:ΩA→K associates π↓BA:ΩA∩B→K, where A,B∈U.

We assume that the following Shafer-Shenoy axioms hold for combination and marginalization.

Axiom 1 (Commutativity and Associativity) Let πA,πB and πC be potentials. Then

Axiom 1 allows us to use the notation πA⊗πB⊗πC.

Axiom 2 (Consonance) Let πA be a potential on A, and let A⊇B⊇C. Then

Axiom 3 (Distributivity) Let πA and πB be potentials on A and B, respectively. Then

The joint potential πU:ΩU→K is said factorize on T with respect to ⊗ if there exists potentials πV:ΩV→K for V∈V, so that we can write π as

In this paper we consider the joint potentials which can be represented with junction tree which is defined as follows.

Let V={V1,V2,…,Vn} be a collection of subsets of U (set of variable indices) and T a tree with V as its node set (corresponds to a set of local domains). Then T is said to be a junction tree if any intersection Vi∩Vj of a pair Vi,Vj of sets in V is contained in every node on the unique path in T between Vi and Vj. Equivalently, for any u∈U, the set of subsets in V containing u induces a connected subtree of T.

A junction tree is usually drawn with sets Vi as node labels. In the following text the node will be identified with the label. The general procedure for the junction tree building can be found in [1] and [2]. An example of the junction tree which corresponds to chain factorization,

The junction tree enables the solution of three important problems:

Messages are passed between the vertexes from V via mailboxes. All mailboxes are initialized as empty. When a message has been placed in a mailbox, the box is full. A node A in the junction tree is allowed to send a message to its neighbor B if it has not done so before and if all A-incoming mailboxes are full except possibly the one which is for B-outgoing messages. So, initially only leaves (nodes which have only one neighbor) of the junction tree are allowed to send messages. But as the message passing proceeds, other nodes will have their turn and eventually all mailboxes will be full, i.e., exactly two messages will have been passed along each branch of the junction tree.

The message form A to B is a function πA→B:ΩA∩B→K. The passage of a message πA→B from node A to node B is performed by absorption. Absorption from clique A to clique B involves eliminating the variables A∖B from the potentials associated with A and its neighbors except B. The structure of the message πA→B is given by

where πC→A is the message passed from C to A. Since the leaves has only one neighbor, the product on the righthand side is empty and the message can initially be computed as

Suppose we start with a joint potential πU on a junction tree T, and pass messages towards a root clique R as described above. When R has received a message from each of its neighbors, the combination of all messages with its own potential is equal to a decomposition of the R-marginal of πU.

where V is vertex-set in T.

Hence, if we want to solve the single vertex problem at node A, we need to compute all messages incoming to A, while for the all vertices problem we need the messages between all pairs of nodes in the tree.

For the single vertex problem, the algorithm starts at the leaves which send the messages to their neighbors. A node sends a message to a neighbor, once it has received messages from each of its other neighbors. The node A never sends a message. Thus, each message is sent only once until A has received the messages from all the neighbors at which point the required marginal is computed and the algorithm terminates with the total number of computed messages equal to the number of edges of the tree. Once we have solved the single vertex problem in the node A, the normalization problem can be solved with (7).

2.1 Operations on the set of functions

and the marginalization is defined with

XU, p:ΩU→R is said to factorize multiplicatively on T if there exists non-negative real functions pC:ΩC→R for C∈V, so that we can write p(xU) as

Similarly, the function h:ΩU→R is said to factorize additively on T if there exists real functions hC:ΩC→R for (C∈V), so that we can write h(xU) as

The first order moment potential, mC:ΩC→R, is defined with

In the case C=∅, the first order moment potential is simply denoted m,

and called the first order moment.

for C∈V. After usage of

2.3 The problem of first order moments computation as all vertices problem

The computation of (18) by enumerating all configurations would require an exponential number of operations with respect to the cardinality of ΩU. However, the computational complexity can be reduced using the local computation algorithm which exploits structure of functions given with factorizations (15) and (16). In this case, the marginal values p↓CU are computed for all C∈V using the local computation over the set of real-valued functions. After that the moment is computed according to equality

This method requires the storing of marginal values p↓CU for all C∈V, which unnecessary increases the memory complexity. Instead, we can use the local computation algorithms by Lauritzen and Nilsson [3] and Mauá et al. [4], which find the moment as the solution of the normalization problem. In the following section, we consider these two algorithms.

In our local computation algorithms we represent the quantitative elements through entities called potentials. Each such potential has two parts, as detailed below.

(Potential) A potential on C⊆U is a pair πC=(pC, hC) of real-valued functions on ΩC, where pC is nonnegative.

To represent and evaluate the decision problem in terms of potentials, we define basic operations of combination and marginalization. There are two possible ways to define the operations.

(Combination) The combination of two potentials πA=(pA,hA) and πB=(pB,hB) denotes the potential on A∪B given by

Here we have used the convention that 0/0 which will be used throughout.

As shown in Lauritzen and Nilsson [3], the operations of combination and marginalization satisfy the properties of Shenoy and Shafer axioms [5], and three structured factorizations can be marginalized using the Shafer-Shenoy algorithm.

If the operations are defined in this way and the potentials are set to,

where we have used probability condition ∑xUpU=1. Hence, the first order moment potential can be computed using the Shafer-Shenoy local computation algorithm, where the combination and marginalization are defined with (26)-(27). The messages have the form:

where the p and h part are given with

Let πU has the chain factorization

and let πi→(i+1) stands as shorthand for the message πVi→Vi+1. According to chain factorization ne(Vi)∖Vi+1={Vi−1}, p and h parts of the message reduce to:

(Combination) Let πA=(pA,hA) and πB=(pB,hB) be two potentials on A and B, respectively. The combination πA⊗πB of πA and πB is the potential on A∪B given by

The following lemma can be proven by induction [6].

be order pair potentials for

If the operations are defined in this way and the potentials are set to,

where we have used probability condition ∑xUpU=1. Again, the first order moment potential can be computed using the Shafer-Shenoy local computation algorithm, where the combination and marginalization are defined with (37) and (38). Like in the Lauritzen-Nilsson algorithm, the messages have the form:

but now, according to 39, the p-part and the h-part of the messages are given with

Let πU has the chain factorization

and let πi→(i+1) stands as shorthand for the message πVi→Vi+1. According to chain factorization ne(Vi)∖Vi+1={Vi−1}, p and h parts of the message reduce to: