In this note, we leverage some of our results from arXiv:1706.06319 to produce a concise and rigorous proof for the complexity of the generalized MinRank Problem in the under-defined and well-defined case. Our main theorem recovers and extends previous results by Faugère, Safey El Din, Spaenlehauer (arXiv:1112.4411). 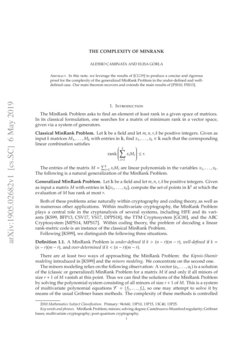 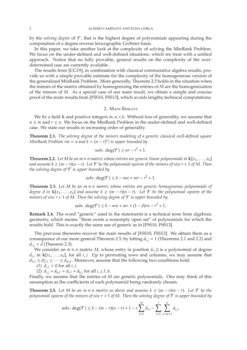 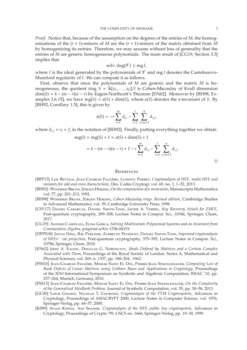 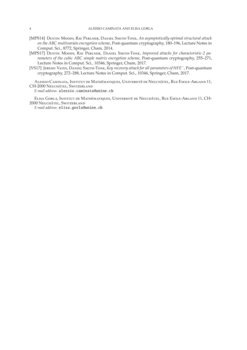 The MinRank Problem asks to find an element of least rank in a given space of matrices. In its classical formulation, one searches for a matrix of minimum rank in a vector space, given via a system of generators.

Let k be a field and let m,n,r,k be positive integers. Given as input k matrices M1,…,Mk with entries in k, find x1,…,xk∈k such that the corresponding linear combination satisfies

The entries of the matrix M=∑ki=1xiMi are linear polynomials in the variables x1,…,xk. The following is a natural generalization of the MinRank Problem.

Let k be a field and let m,n,r,k be positive integers. Given as input a matrix M with entries in k[x1,…,xk], compute the set of points in kk at which the evaluation of M has rank at most r.

Both of these problems arise naturally within cryptography and coding theory, as well as in numerous other applications. Within multivariate cryptography, the MinRank Problem plays a central role in the cryptanalysis of several systems, including HFE and its variants [KS99, BFP13, CSV17, VS17, DPPS18], the TTM Cryptosystem [GC00], and the ABC Cryptosystem [MPS14, MPS17]. Within coding theory, the problem of decoding a linear rank-metric code is an instance of the classical MinRank Problem.

There are at least two ways of approaching the MinRank Problem: the Kipnis-Shamir modeling introduced in [KS99] and the minors modeling. We concentrate on the second one.

The minors modeling relies on the following observation: A vector (a1,…,ak) is a solution of the (classic or generalized) MinRank Problem for a matrix M if and only if all minors of size r+1 of M vanish at this point. Thus we can find the solutions of the MinRank Problem by solving the polynomial system consisting of all minors of size r+1 of M. This is a system of multivariate polynomial equations F={f1,…,fs}, so one may attempt to solve it by means of the usual Gröbner bases methods. The complexity of these methods is controlled by the solving degree of F, that is the highest degree of polynomials appearing during the computation of a degree reverse lexicographic Gröbner basis.

In this paper, we take another look at the complexity of solving the MinRank Problem. We focus on the under-defined and well-defined situations, which we treat with a unified approach. Notice that no fully provable, general results on the complexity of the over-determined case are currently available.

, in combination with classical commutative algebra results, provide us with a simple provable estimate for the complexity of the homogeneous version of the generalized MinRank Problem. More generally, Theorem

2.5 holds in the situation when the minors of the matrix obtained by homogenizing the entries of M are the homogenization of the minors of M. As a special case of our main result, we obtain a simple and concise proof of the main results from [FSS10, FSS13], which avoids lengthy technical computations.

We fix a field k and positive integers m,n,r,k. Without loss of generality, we assume that n≥m and r<m. We focus on the MinRank Problem in the under-defined and well-defined case. We state our results in increasing order of generality.

Let M be an m×n matrix whose entries are generic linear polynomials in k[x1,…,xk] and assume k≥(m−r)(n−r). Let F be the polynomial system of the minors of size r+1 of M. Then the solving degree of F is upper bounded by

Let M be an m×n matrix whose entries are generic homogeneous polynomials of degree d in k[x1,…,xk] and assume k≥(m−r)(n−r). Let F be the polynomial system of the minors of size r+1 of M. Then the solving degree of F is upper bounded by

The word “generic” used in the statements is a technical term from algebraic geometry, which means “there exists a nonempty open set” of polynomials for which the results hold. This is exactly the same use of generic as in [FSS10, FSS13].

We consider an m×n matrix M, whose entry in position (i,j) is a polynomial of degree di,j in k[x1,…,xk], for all i,j. Up to permuting the rows of M, we may assume that d1,1≤d2,1≤⋯≤dm,1. Moreover, assume that the following two conditions hold:

Finally, we assume that the entries of M are generic polynomials. One may think of this assumption as the coefficients of each polynomial being randomly chosen.

Let M be an m×n matrix as above and assume k≥(m−r)(n−r). Let F be the polynomial system of the minors of size r+1 of M. Then the solving degree of F is upper bounded by

where I is the ideal generated by the polynomials of F and regI denotes the Castelnuovo-Mumford regularity of I. We can compute it as follows.

where di,j=ei+fj in the notation of [BH92]. Finally, putting everything together we obtain