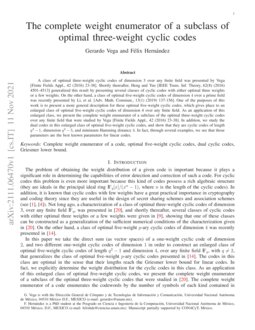 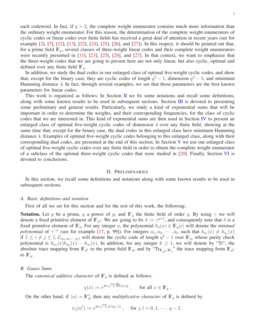 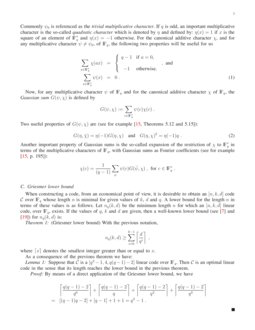 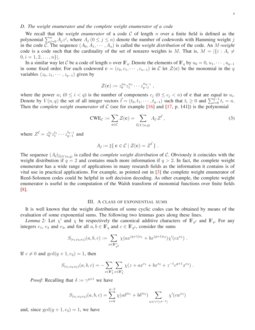 General Method for Prime-point Cyclic Convolution over the Real Field

The uncertainty principle over finite fields

In this paper we study the uncertainty principle (UP) connecting a funct...
Martino Borello, et al. ∙

Direct sum masking (DSM) has been proposed as a counter-measure against ...
Claude Carlet, et al. ∙

The problem of obtaining the weight distribution of a given code is important because it plays a significant role in determining the capabilities of error detection and correction of such a code. For cyclic codes this problem is even more important because this kind of codes possess a rich algebraic structure (they are ideals in the principal ideal ring IFq[x]/(xn−1), where n is the length of the cyclic codes). In addition, it is known that cyclic codes with few weights have a great practical importance in cryptography and coding theory since they are useful in the design of secret sharing schemes and association schemes (see [1, 4]). Not long ago, a characterization of a class of optimal three-weight cyclic codes of dimension 3, over any finite field IFq, was presented in [20], and shortly thereafter, several classes of cyclic codes with either optimal three weights or a few weights were given in [9], showing that one of these classes can be constructed as a generalization of the sufficient numerical conditions of the characterization given in [20]. On the other hand, a class of optimal five-weight p-ary cyclic codes of dimension 4 was recently presented in [14].

In addition, we study the dual codes in our enlarged class of optimal five-weight cyclic codes, and show that, except for the binary case, they are cyclic codes of length q2−1, dimension q2−5, and minimum Hamming distance 4. In fact, through several examples, we see that those parameters are the best known parameters for linear codes.

In this section, we recall some definitions and notations along with some known results to be used in subsequent sections.

First of all we set for this section and for the rest of this work, the following:

Notation. Let p be a prime, q a power of p, and IFq the finite field of order q. By using γ we will denote a fixed primitive element of IFq2. We are going to fix δ:=γq+1, and consequently note that δ is a fixed primitive element of IFq. For any integer a, the polynomial ha(x)∈IFq[x] will denote the minimal polynomial of γ−a (see for example [17, p. 99]). For integers a1,a2,⋯,al, such that hai(x)≠haj(x) if 1≤i≠j≤l, C(a1,a2,⋯,al) will denote the cyclic code of length q2−1 over IFq, whose parity check polynomial is ha1(x)ha2(x)⋯hal(x). In addition, for any integer k≥1, we will denote by “Tr”, the absolute trace mapping from IFqk to the prime field IFp, and by “TrIFqk/IFq” the trace mapping from IFqk to IFq.

The canonical additive character of IFq is defined as follows:

On the other hand, if ⟨α⟩=IF∗q, then any multiplicative character of IFq is defined by

Commonly ψ0 is referenced as the trivial multiplicative character. If q

is odd, an important multiplicative character is the so-called

quadratic character which is denoted by η and defined by: η(x)=1 if x is the square of an element of IF∗q and η(x)=−1 otherwise. For the canonical additive character χ, and for any multiplicative character ψ≠ψ0, of IFq, the following two properties will be useful for us

Now, for any multiplicative character ψ of IFq and for the canonical additive character χ of IFq, the Gaussian sum G(ψ,χ) is defined by

Another important property of Gaussian sums is the so-called expansion of the restriction of χ to IF∗q in terms of the multiplicative characters of IFq, with Gaussian sums as Fourier coefficients (see for example [15, p. 195]):

When constructing a code, from an economical point of view, it is desirable to obtain an [n,k,d] code C over IFq whose length n is minimal for given values of k, d and q. A lower bound for the length n in terms of these values is as follows. Let nq(k,d) be the minimum length n for which an [n,k,d] linear code, over IFq, exists. If the values of q, k and d are given, then a well-known lower bound (see [7] and [19]) for nq(k,d) is:

where ⌈x⌉ denotes the smallest integer greater than or equal to x.

As a consequence of the previous theorem we have:

Suppose that C is a [q2−1,4,q(q−1)−2] linear code over IFq. Then C is an optimal linear code in the sense that its length reaches the lower bound in the previous theorem.

By means of a direct application of the Griesmer lower bound, we have

We recall that the weight enumerator of a code C of length n over a finite field is defined as the polynomial ∑nj=0Ajzj, where Aj(0≤j≤n) denote the number of codewords with Hamming weight j in the code C. The sequence (A0,A1,⋯,An) is called the weight distribution of the code. An M-weight code is a code such that the cardinality of the set of nonzero weights is M. That is, M=|{i:Ai≠0,i=1,2,…,n}|.

Iii A class of exponential sums

It is well known that the weight distribution of some cyclic codes can be obtained by means of the evaluation of some exponential sums. The following two lemmas goes along these lines.

Let χ′ and χ be respectively the canonical additive characters of IFq2 and IFq. For any integers e1, e2 and e3, and for all a,b∈IFq and c∈IFq2, consider the sums

Recalling that δ:=γq+1 we have

On the other hand, by using the Fourier expansion of the restriction of χ to IF∗q in terms of the multiplicative characters of IFq, we have that for all x,z∈IF∗q:

Finally, by substituting the previous equation in (4) we obtain the desired result.

With the same notation, consider the character sum of the form:

Without loss of generality we assume that b≠0. Thus, from the previous lemma, and since yq+1=y2, we have

Thus, owing to (6), the case q even follows from the fact that

Applying the variable substitution cq+1bw↦v (that is w=cq+1bv), we have

Finally, the result follows from the fact that (see (II-B))

Case 2: Without loss of generality we assume that a=0 and b≠0. Then

Applying the variable substitution xe1y↦v (that is y=vxe1), we have