The Challenge of Sixfold Integrals: The Closed-Form Evaluation of Newton Potentials between Two Cubes

The challenge of explicitly evaluating, in elementary closed form, the weakly singular sixfold integrals for potentials and forces between two cubes has been taken up at various places in the mathematics and physics literature. It created some strikingly specific results, with an aura of arbitrariness, and a single intricate general procedure due to Hackbusch. Those scattered instances were mostly addressing the problem heads on, by successive integration while keeping track of a thicket of primitives generated at intermediate stages. In this paper we present a substantially easier and shorter approach, based on a Laplace transform of the kernel. We clearly exhibit the structure of the results as obtained by an explicit algorithm, just computing with rational polynomials. The method extends, up to the evaluation of single integrals, to higher dimensions. Among other examples, we easily reproduce Fornberg's startling closed form solution of Trefethen's two-cubes problem and Waldvogel's symmetric formula for the Newton potential of a rectangular cuboid. 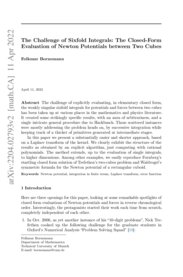 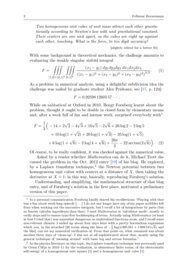 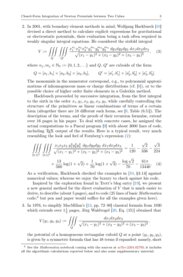 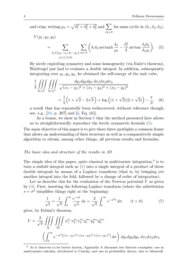 We report a closed-form expression for the Kullback-Leibler divergence b...
Frédéric Chyzak, et al. ∙

We present an elementary proof of the generalization of the k-bonacci Bi...
Harold R. Parks, et al. ∙

Evaluation of pair potentials is critical in a number of areas of physic...
Michael P. Lingg, et al. ∙

Evaluation of pair potentials is critical in a number of areas of physic...
Michael P. Lingg, et al. ∙

Here are three openings for this paper, looking at some remarkable spotlights of closed form evaluations of Newton potentials and forces in reverse chronological order. Interestingly, the protagonists started their work each time from scratch, completely independent of each other.

The main objective of this paper is to give these three spotlights a common frame that allows an understanding of their structure as well as a comparatively simple algorithm to obtain, among other things, all previous results and formulae.

The basic idea and structure of the results in 3D

The simple idea of this paper, quite classical in multivariate integration,444

As it deserves to be better known, Appendix A discusses two historic examples: one in multivariate calculus, attributed to Cauchy, and one in probability theory, due to Montroll.

is to turn a sixfold integral such as (1) into a single integral of a product of three double integrals by means of a Laplace transform (that is, by bringing yet another integral into the fold, followed by a change of order of integration).

Let us describe this for the evaluation of the Newton potential V as given by (3). First, inserting the following Laplace transform (where the substitution s=σ2 simplifies things right at the beginning)

where fj specifies the following function (with n, m suppressed in the notation) for the parameters and variables with index j:

Next, as explained in Section 2, by introducing the error function \operator@fontErf(ξ)

simply as the unique odd primitive (antiderivative) of the Gaussian

e−ξ2, we get an algorithmic description of the factors f(σ): they are linear combinations of terms of the form

Finally, as explained in Section 3, the error function serves merely as an intermediary on the way to the elementary closed form of V. We arrive there by a renormalization process, based on partial integration for removing cancelling singularities at σ=0 of the integrand f1(σ)f2(σ)f3(σ). In passing, this process also reduces the number of possible terms to eventually just three basic forms—for which, ultimately, there are entries found in a table of integrals such as the one by Prudnikov et al. MR950173 (for the sake of completeness, we give simple proofs of these entries in Appendix B).

As explained in Section 4, this algorithmic construction extends also to the evaluation of force components and yields, in summary:

In the 3D case, the potential and also the force components are linear combinations of terms of the form555Recall the notation ρδ=√δ21+δ22+δ23 that we introduced in Waldvogel’s formula (5).

where (δ1,δ2,δ3) satisfies δ1≠0 and is, up to a permutation, the component-wise difference between the coordinates of a vertex of Q and a vertex of Q′; the coefficients of the terms are rational polynomials in the integral bounds. Note that this theorem reveals a general structure that is already visible in Waldvogel’s formula (5)—an example that effectively corresponds to the case that Q′ is shrunk to a point (y1,y2,y3) while the potential is properly rescaled. By rewriting the inverse hyperbolic tangent in terms of logarithms, this structure is also present in the concrete cases (2), (4), and (6).

Extensions and limitations of the method

When extending the class of problems to higher dimensions, or other (weakly) singular integral kernels, we hit the limits of multiple integrals being evaluable in terms of elementary closed form expressions:

First, in dealing with force components in Section 4, we note the importance of factors such as x1−y1 in the numerator of (1) to make the method work; by means of an example we argue that general integrals with an r−3 kernel are highly unlikely to be evaluable in elementary finite terms at all.

Therefore, in such cases we have to resort to the (straightforward) numerical evaluation of a single integral; with dimensions 100 or higher posing no problem whatsoever.

2 Evaluation of the Factor f(σ)

\operator@fonterf(ξ):=2√π∫ξ0e−x2dx,
which would yield a lot of distracting factors √π in our formulae; for \operator@fontErf(ξ) see (MR2655347, §7.1). it is simply defined here as the unique odd primitive of the Gaussian, that is

from which we directly obtain the asymptotics as ξ→0, and ξ→∞, namely

Writing primitives as indefinite integrals (with constants of integration determined implicitly by the given formulae), we get the following result:

and initial values taken as u0(x,y)=0 and v0(y)=1. Then these functions are primitives of the nth

The recursions for un and vn combine into the single one

A concrete example of the use of this lemma, with n=4, can be found in Section 6, following Eq. (31). We proceed by considering the double indefinite integrals that are the basis for calculating the factor f(σ).

where pn,m,qn,m∈Q[x,y] are polynomials of degree n+m and n+m+1 with

which are obtained by expanding and replacing according to the following rules:

Using Lemma 1 we calculate a primitive, written as a double integral,

By expanding un(x,y)ym in the first integral into powers of y, another application of Lemma 1 shows that yk contributes

Combining the coefficients of e−(x−y)2 and \operator@fontErf(x−y) gives the table. The claim about the polynomial degrees follows from the degrees of un and vn. ∎

Now, by substitution and rescaling we get the primitive

Algorithmically, with the integral bounds a,b,a′,b′ handled as variables, the construction of this expression for f(σ) by means of Corollary 1 uses simply some arithmetic of rational polynomials. Structurally, we get:

is a linear combination of terms of the form777Since \operator@fontErf(0)=0, the second one can be dropped if δ=0.

Note that Lemma 2 enumerates (n+m+2)⋅#Δ possible terms. In concrete cases, by partial symmetries, some of them may vanish, cancel, or combine.

By construction, f(σ) is a linear combination of terms of the form

with ν=1,…,n+m+2 and δ taken from the set Δ of differences of the integral bounds; the coefficients are of the stated form. Since f(σ) is an even function of σ, by linear independence of the even Gaussians and the odd error functions (listed by different values of the parameter |δ|) over the field of rational functions, only terms that are themselves even functions of σ can have non-zero coefficients. Hence it suffices to take only those exponents ν into account which are even in the first case and odd in the second.∎

Though both forms of the terms in (14) behave as ∝σ−2k close to σ=0, all those singularities must cancel since obviously, as σ→0,

We consider two specific cases of the integral

Here, the exponents ν of σ−1 are restricted to 1⩽ν⩽5. The first specific case, with difference set Δ={1,2,3}, exhibits all of the 15 possible terms enumerated in Lemma 2:

The singularities of those 12 terms that behave as ∝σ−2 and ∝σ−4 close to σ=0 must cancel since, as σ→0,

In the second specific case, with the symmetric difference set Δ={−1,0,1}, fewer terms than enumerated in Lemma 2 have non-zero coefficients (there are no terms with σ−4 and σ−5):

Once again, the singularities at σ=0 cancel since

3 Evaluation of the Potential

where κ∈N and the triple (δ1,δ2,δ3) is, up to a permutation, the component-wise difference between the coordinates of a vertex of Q and a vertex of Q′.

All of these terms are integrable at σ→∞, but none of them (except the last one with κ=1) is integrable at σ→0. So a direct, term-wise integration of g(σ) is bound to fail. Yet, those singularities must cancel since, as σ→0,

So, to remove the cancelling singularities, some kind of renormalization is called for. We write

and apply, following an idea explored by Trott Trott, repeated integration by parts as long as there are any singular terms left in the reminder integrals.

Specifically, if there is sufficient decay at σ→∞, we have

Since the functions h(σ) will be analytic at σ=0, the sum of all the boundary terms must cancel in the end: we therefore do not calculate them in the first place. This way, by repeated application of the replacement rule

until no term is left to be replaced, the integrand g(σ) is eventually transformed into a renormalized one, denoted by ~g(σ), such that

and the integral can, finally, be evaluated term-wise.

Because the derivatives of exp(−σ2ρ2) and \operator@fontErf(σδ) wrt σ are −2ρ2σe−σ2ρ2 and δe−σ2δ2, these replacement rules do not introduce any new forms of terms; for k=1,2,… , there are effectively just four rules: