The Berry-Esséen upper bounds of moment estimators and least squares estimators of the mean and drift coefficients in Vasicek models driven by general Gaussian processes are studied. When studying the parameter estimation problem of Ornstein-Uhlenbeck (OU) process driven by fractional Brownian motion, the commonly used methods are mainly given by Kim and Park, they show the upper bound of Kolmogorov distance between the distribution of the ratio of two double Wiener-Itô stochastic integrals and the Normal distribution. The main innovation in this paper is extending the above ratio process, that is to say, the numerator and denominator respectively contain triple Wiener-Itô stochastic integrals at most. As far as we know, the upper bounds between the distribution of above estimators and the Normal distribution are novel. 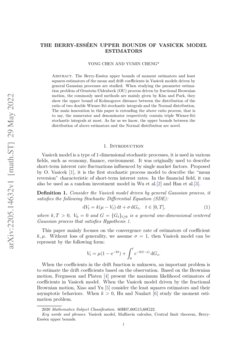 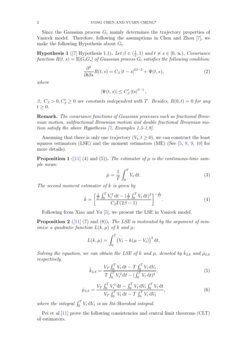 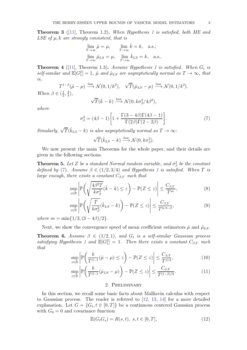 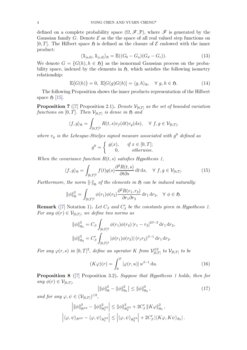 In this paper novel simulation methods are provided for the Generalised ...
Simon Godsill, et al. ∙

Although there is an extensive literature on the upper bound for cumulat...
Omar Eidous, et al. ∙

In the present paper we consider the Ornstein-Uhlenbeck process of the s...
Maoudo Faramba Balde, et al. ∙

In this paper, we develop local expansions for the ratio of the centered...
Frédéric Ouimet, et al. ∙

Vasicek model is a type of 1-dimensional stochastic processes, it is used in various fields, such as economy, finance, environment. It was originally used to describe short-term interest rate fluctuations influenced by single market factors. Proposed by O. Vasicek [19], it is the first stochastic process model to describe the “mean reversion” characteristic of short-term interest rates. In the financial field, it can also be used as a random investment model in Wu et al.[20] and Han et al.[9].

where k,T>0, V0=0 and G={Gt}t≥0 is a general one-dimensional centered Gaussian process that satisfies creftypecap 1.

This paper mainly focuses on the convergence rate of estimators of coefficient k,μ. Without loss of generality, we assume σ=1, then Vasicek model can be represent by the following form:

When the coefficients in the drift function is unknown, an important problem is to estimate the drift coefficients based on the observation. Based on the Brownian motion, Fergusson and Platen [8] present the maximum likelihood estimators of coefficients in Vasicek model. When the Vasicek model driven by the fractional Brownian motion, Xiao and Yu [21] consider the least squares estimators and their asymptotic behaviors. When k>0, Hu and Nualart [10] study the moment estimation problem.

Since the Gaussian process Gt mainly determines the trajectory properties of Vasicek model. Therefore, following the assumptions in Chen and Zhou [7], we make the following Hypothesis about Gt.

The estimator of μ is the continuous-time sample mean:

The second moment estimator of k is given by

Following from Xiao and Yu [21], we present the LSE in Vasicek model.

The LSE is motivated by the argument of minimize a quadratic function L(k,μ) of k and μ:

Solving the equation, we can obtain the LSE of k and μ, denoted by ^kLS and ^μLS respectively.

When creftypecap 1 is satisfied, both ME and LSE of μ,k are strongly consistent, that is

Assume creftypecap 1 is satisfied. When Gt is self-similar and E[G21]=1, ^μ and ^μLS are asymptotically normal as T→∞, that is,

We now present the main Theorems for the whole paper, and their details are given in the following sections.

be a standard Normal random variable, and

σ2β be the constant defined by (7). Assume β∈(1/2,3/4) and creftypecap 1 is satisfied. When T is large enough, there exists a constant Cβ,V such that

Next, we show the convergence speed of mean coefficient estimators ^μ and ^μLS.

Assume β∈(1/2,1), and Gt is a self-similar Gaussian process satisfying creftypecap 1 and E[G21]=1. Then there exists a constant Cβ,V such that

In this section, we recall some basic facts about Malliavin calculus with respect to Gaussian process. The reader is referred to [15, 18, 17] for a more detailed explanation. Let G={Gt,t∈[0,T]} be a continuous centered Gaussian process with G0=0 and covariance function

defined on a complete probability space

(Ω,F,P), where F is generated by the Gaussian family G. Denote E as the the space of all real valued step functions on [0,T]. The Hilbert space H is defined as the closure of E endowed with the inner product:

We denote G={G(h),h∈H} as the isonormal Gaussian process on the probability space, indexed by the elements in H, which satisfies the following isometry relationship:

The following Proposition shows the inner products representation of the Hilbert space H [11].

Furthermore, the norm ∥⋅∥H of the elements in H can be induced naturally:

-th tensor product and the

p-th symmetric tensor product of H. For every p≥1, denote Hp as the p-th Wiener chaos of G. It is defined as the closed linear subspace of L2(Ω) generated by {Hp(G(h)):h∈H,∥h∥H=1}, where Hp is the p-th Hermite polynomial. Let h∈H such that ∥h∥H=1, then for every p≥1 and h∈H,

The following proposition shows the product formula for the multiple integrals.

We then introduce the derivative operator and the divergence operator. For these details, see sections 2.3-2.5 of [15]. Let T be the class of smooth random variables of the form:

where n≥1, f∈C∞b(Rn) which partial derivatives have at most polynomial growth, and for i=1,⋯,n, ψi∈H. Then, the Malliavin derivative of F (with respect to G) is the element of L2(Ω,H) defined by

Given q∈[1,∞) and integer p≥1, let Dp,q denote the closure of T with respect to the norm

Denote δ (the divergence operator) as the adjoint of D. The domain of δ is composed of those elements:

and is denoted by Dom(δ). If u∈Dom(δ), then δ(u) is the unique element of L2(Ω) characterized by the duality formula:

We now introduce the infinitesimal generator L of the Ornstein-Uhlenbeck semigroup. Let F∈L2(Ω) be a square integrable random variable. Denote Jn:L2(Ω)→Hn as the orthogonal projection on the n-th Wiener chaos Hn. The operator L is defined by LF=−∑∞n=0nJnF. The domain of L is

The following Lemma 10 provides the Berry-Esséen upper bound on the sum of two random variables.

For any variable ξ,η and a∈R, the following inequality holds:

where Φ(z) is the standard Normal distribution function.

Let FT∈D1,2 be a zero-mean process, and GT∈D1,2 satisfies GT>0 a.s.. For simplicity, we define the following four functions:

Let Z be a standard Normal variable. Assuming that for every z∈R, FT+zGT has an absolutely continuous law with respect to Lebesgue measure and Ψi(T)→0, i=1,⋯,4, as T→∞. Then, there exists a constant c such that for T large enough,

In this section, we will prove the Berry-Esséen upper bounds of Vasicek model moment estimators ^μ and ^k. For the convenience of the following discussion, we first define A(z):

where Z∼N(0,1) is a standard Normal variable. Next, we introduce the CLT of ^μ.

is stochastic integral with respect to Gt.

Following from the above Theorem, we can obtain the expanded form of (20):

Then, we can prove the convergence speed of ^μ.

Since GT is self-similar, (GT/Tβ) is standard Normal variable,

Following from Chebyshev inequality, we can obtain

The Proposition 3.10 of [6] ensures that C1 is bounded. Combining the above results, we have

When T is sufficiently large, there exists the constant Cβ,V such that the formula (10) holds. ∎

Similarly, we review the central limit theorem of ^k.

The following Lemma shows the upper bound of the expectation of (∫T0e−ksdGs)2.

Let MT be the process defined by

When β∈(1/2,1), there exists constant C independent of T such that

where C′ is a constant. Also, we have

Combining the above two formulas, we obtain (23). ∎

Then we can obtain the Berry-Esséen upper bound of ME ^k.

Then we can obtain

Combining with Lemma 15, we obtain the desired result. ∎

The following Lemma provides the upper bound of D(ν).

When T is large enough, there exists constant C′β,V such that

Since the Normal distribution is symmetric, we have

where Xt is an OU process driven by Gt. According to [6] formula (63), we can obtain