The Bayesian Method of Tensor Networks 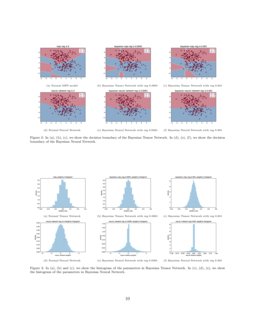 The prior distribution on parameters of a likelihood is the usual starti...
Edwin Fong, et al. ∙

A Normal Approximation Method for Statistics in Knockouts

The authors give an approximation method for Bayesian inference in arena...
Yutong Nie, et al. ∙

Driven by the critical needs of biomanufacturing 4.0, we present a proba...
Wei Xie, et al. ∙

We introduce a novel framework for the estimation of the posterior distr...
Arnold Salas, et al. ∙

Bayesian Learning is a framework to combine the internal data information with your background knowledge on your specific learning task, namely the external information in a logically consistent way by Bayes Theorem

In practical application, labels will be assigned to the new observations in classification problem. To determine the decision boundary, the utility matrix (negative loss matrix) will be written down and then the decision threshold will be determined by minimize the expected loss.

Deep Neural Networks have made great achievements in recent years lecun2015deep; hinton2006fast; lecun1995convolutional; krizhevsky2012imagenet; hochreiter1997long; srivastava2014dropout. Actually several work were proposed to develop the Bayesian Framework of Neural Network. In the Bayesian Framework of Neural Network, the key part and also difficulty part is to approximate the posterior distribution and also the predictive marginal distribution.

In the framework of hierarchical modeling for model uncertainty which is published by another author of this paper, Prof. David Draper proposed a general framework to consider the model uncertainty and also discussed the computation techniques in inference and prediction steps in the Bayesian Modeling considering model uncertainty draper1995assessment

mackay1992interpolation. Radford Neal focus on constructing appropriate priors for the Neural Networks based on the properties of the Neural Networks. Neal suggested to use the infinite hidden units network and the priors converge to the stochastic process. Neal also proposed to use the Hybrid Monte Carlo to do the posterior predictive distribution (integral) simulation neal2012bayesian. Instead of approximate the posterior integral, variational method idea, namely searching in the parameterized functional space by maximizing the Evidence Lower Bound is widely explored blei2006variational; kingma2013auto. Recently, there are amounts of developments following and developing above ideas buntine1991bayesian; tran2019bayesian; lee2017deep; arora2019exact; arora2019harnessing; blundell2015weight; xiong2011bayesian; salakhutdinov2008bayesian; balan2015bayesian; hernandez2015probabilistic.

3.1 Background and Set Up

Although Tensor Network has powerful representation ability because of the bond dimension between every pair of tensor nodes neighboring each other, it is difficult to train long Matrix Product States chains. Since every tensor node in the chain will contribute one multiplication factor, the output will roughly increase or decrease with a exponential rate with respect to the number of nodes.

The Set up of the Tensor Network is as follows,

The networks will not work well or even not work if the tensor nodes are not well initialized since little perturbation of the tensor weights will be amplified because of the exponential rate respect to the number of nodes.

To solve the respond or gradients exploding or vanishing problem, we focused on initialize the parameters with the appropriate distribution. To train deep neural networks, Glorot and Bengio glorot2010understanding

proposed to initialize the parameters with the scaled uniform distribution in the Sigmoid neuron case. For the Relu neuron, He and his collaborators

Considering the particular kernel function ϕ(x)=[x,1−x]T, we have

We get the variance of the gradients as

In a good initialization method, we can set the variance of the tensor nodes Var[Asiαiαj] as the same order of the output variance Var[ψl(x)] which will avoid increasing or decreasing the response exponentially, so we get

We analyze the asymptotic behavior of our initialization formula. From the tensor weights perspective,

From the gradient perspective,

Different from Xavier glorot2010understanding, and He initialization he2015delving, our initialization formula does not depend on the number of the nodes heavily as we see the number of nodes n just get into the index of the variance of each feature of the data as a fractional factor and the factor will converge to 1 quickly. However, the bond dimension and the physical dimension, namely the dimension of the kernel has a huge effects on the initialization.

We analyse the mean of the parameters following the above idea,

Similarly, we can get

In Fig. 0(b), Fig. 0(d), and Fig. 0(f), we show the accuracy curves with the standard deviation σ obtained by our formula, and slightly scaled std deviation. In the data set whose data has more number of features, the training process is more sensitive to the initialization and small deviation from the std given by our formula will lead to the bad convergence.

We write down our Bayesian Tensor Networks model as follows,

In the inference step, we write down the posterior distribution of the parameters A, namely p(A|D,B) as

If we use the Maximum A Posterior Estimator (M.A.P.) to estimate the parameters in the optimal mode of the model which is the same as the normal Tensor Network model,

In our work, we focus on the Full Bayesian Analysis. We do prediction and make decision based on the predictive posterior marginal distribution.

Obviously the information contained in the data set D is lost in the point approximation.

According to the predictive posterior marginal distribution p(^t|^x,D,α,B) obtained in the prediction step, we can assign every new observation ^x in the test set with one label ^t which is a decision problem. For the goal of minimizing the misclassification rate in the classification problem, the decision boundary is determined as

For some practical case where utility matrix (negative loss matrix) is specially designed, we can also maximize the expected utility function to determine the action. For the regression problem, we focus on the mean square loss and by minimize the expected loss, it is proved that the decision boundary is the conditional expectation of the label given the features, namely Et(t|x), which is just the value of the regression function y(A,x).

In our convention, the data set is notated as

in the classification problem. In our set up, t(i)

For the binary classification problem, the response of the Bayesian Tensor Network model is the logits, namely

If we treat every component of the encoded vector t(i) independently and model each component with above logit formula, then it can be easily extended to multi-classification case.

In the multi-classification case, we use the Softmax activation function and we get

For the binary case, we can write down the cost function as −logp(A|D,α,B)

For the multi-classification case, we have

The co-variance matrix of the Normal distribution q(A|D,α,B) is

where H is the second derivative matrix of the log likelihood function logp(D|A,α,B). The time complexity of computing the inverse of the Hessian matrix M is O(n3) which is time consuming, so we use the Out-Product approximation to decrease the time complexity to O(n).

By plugging in the approximated posterior distribution q(A|D,α,B), we get

Our result above just contains the first derivative which means the time complexity is almost O(n). Here ψ(i)k means the k component of the output of the Bayesian Tensor Networks. Different from the Neural Networks, the first derivative of the logits can be calculated analytically and then we can get an analytical result of the Hessian matrix of the Bayesian Tensor Networks.

We study the performance of the Bayesian Tensor Networks on several data set.

To study the Bayesian effects, we visualize the parameters in the Bayesian Tensor Network and the decision boundary in two dimensional synthetic data set.

We study the performance of the Bayesian Tensor Network with different standard deviation and different bond dimension on the Breast Cancer Wisconsin, Phishing Website and MNIST data set.

We train the Bayesian Tensor Networks and Bayesian Neural Networks on the blobs synthetic data set which contains 200 samples in two classes. We used relatively bigger tensor nets and neural nets model to overfit the data set to study the Bayes shrinkage effect with different prior distribution in Bayesian Tensor Network and Bayesian Neural Network in Fig. 2. As we use greater standard deviation in the prior Normal distribution, the decision boundary becomes smoother. From our numerical experiments, we find that neural network is slightly more sensitive to the prior distribution than the tensor network.