Ferson et al. (Reliable computing 11(3), p. 207--233, 2005) introduced an algorithm for the NP-hard nonconvex quadratic programming problem called MaxVariance motivated by robust statistics. They proposed an implementation with worst-case time complexity O(n^2 · 2^ω), where ω is the largest clique in a certain intersection graph. First we show that with a careful implementation the complexity can be improved to O(n n + n· 2^ω). Then we treat input data as random variables (as it is usual in statistics) and introduce a natural probabilistic data generating model. We show that ω = O( n/ n) on average under this model. As a result we get average computing time O(n^1+ε) for ε > 0 arbitrarily small. We also prove the following tail bound on computation time: the instances, forcing the algorithm to compute in exponential time, occur rarely, with probability tending to zero faster than exponentially with n →∞. 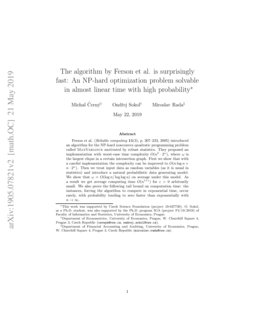 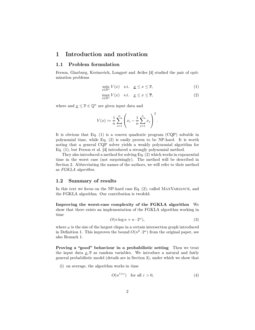 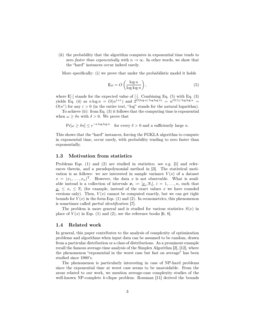 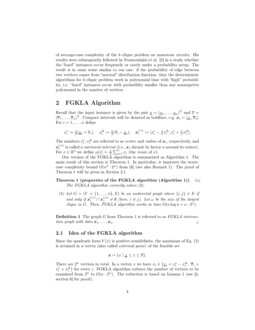 It is obvious that Eq. 1 is a convex quadratic program (CQP) solvable in polynomial time, while Eq. 2 is easily proven to be NP-hard. It is worth noting that a general CQP solver yields a weakly polynomial algorithm for Eq. 1, but Ferson et al. [4] introduced a strongly polynomial method.

They also introduced a method for solving Eq. 2 which works in exponential time in the worst case (not surprisingly). The method will be described in Section 2. Abbreviating the names of the authors, we will refer to their method as FGKLA algorithm.

In this text we focus on the NP-hard case Eq. 2, called MaxVariance, and the FGKLA algorithm. Our contribution is twofold.

Improving the worst-case complexity of the FGKLA algorithm

where ω is the size of the largest clique in a certain intersection graph introduced in Definition 1. This improves the bound O(n2⋅2ω) from the original paper, see also Remark 1.

Proving a “good” behaviour in a probabilistic setting

Then we treat the input data x––,¯¯¯x as random variables. We introduce a natural and fairly general probabilistic model (details are in Section 3), under which we show that

More specifically: 1 we prove that under the probabilistic model it holds

To achieve 2: from Eq. 3 it follows that the computing time is exponential when ω≥δn with δ>0. We prove that

This shows that the “hard” instances, forcing the FGKLA algorithm to compute in exponential time, occur rarely, with probability tending to zero faster than exponentially.

Problems Eqs. 2 and 1 are studied in statistics; see e.g. [1] and references therein, and a pseudopolynomial method in [3]

. The statistical motivation is as follows: we are interested in sample variance

V(x) of a dataset x=(x1,…,xn)T. However, the data x is not observable. What is available instead is a collection of intervals xi\coloneqq[x––i,¯¯¯xi], i=1,…,n, such that x––i≤xi≤¯¯¯xi (for example, instead of the exact values x we have rounded versions only). Then, V(x) cannot be computed exactly, but we can get tight bounds for V(x) in the form Eqs. 2 and 1. In econometrics, this phenomenon is sometimes called partial identification [7].

The problem is more general and is studied for various statistics S(x) in place of V(x) in Eqs. 2 and 1, see the reference books [6, 8].

In general, this paper contributes to the analysis of complexity of optimization problems and algorithms when input data can be assumed to be random, drawn from a particular distribution or a class of distributions. As a prominent example recall the famous average-time analysis of the Simplex Algorithm [2], [12], where the phenomenon “exponential in the worst case but fast on average” has been studied since 1980’s.

The phenomenon is particularly interesting in case of NP-hard problems since the exponential time at worst case seems to be unavoidable. From the areas related to our work, we mention average-case complexity studies of the well-known NP-complete k-clique problem: Rossman [11] derived the bounds of average-case complexity of the k-clique problem on monotone circuits. His results were subsequently followed by Fountoulakis et al. [5] in a study whether the “hard” instances occur frequently or rarely under a probability setup. The result is in some sense similar to our one: if the probability of edge between two vertices comes from “natural” distribution function, then the deterministic algorithms for k-clique problem work in polynomial time with “high” probability, i.e. “hard” instances occur with probability smaller than any nonnegative polynomial in the number of vertices.

The numbers x∗i,xΔi are referred to as center and radius of xi, respectively, and x1/ni is called a narrowed interval (i.e., xi shrunk by factor n around its center). For x∈Rn we define μ[x]\coloneqq1n∑ni=1xi (the mean of x).

Our version of the FGKLA algorithm is summarized as Algorithm 1. The main result of this section is Theorem 1. In particular, it improves the worst-case complexity bound O(n2⋅2ω) from [4] (see also Remark 1). The proof of Theorem 1 will be given in Section 2.1.

The graph G from Theorem 1 is referred to as FGKLA intersection graph with data x1,…,xn. □

2.1 Idea of the FGKLA algorithm

Since the quadratic form V(x) is positive semidefinite, the maximum of Eq. 2 is attained in a vertex (also called extremal point) of the feasible set

There are 2n vertices in total. In a vertex x we have xi∈{x––i=x∗i−xΔi, ¯¯¯xi=x∗i+xΔi} for every i. FGKLA algorithm reduces the number of vertices to be examined from 2n to O(n⋅2ω). The reduction is based on Lemma 1 (see [4, section 6] for proof).

be the set of all vectors

Then X contains a maximizer. □

On creftype 5, we examine the vertex ¯¯¯x. The value of V(¯¯¯x) is computed and stored as M, the maximal value of V found so far. Variables V1 and V2 will be useful in Algorithm 2.

Then, Algorithm 1 takes means a1,…,am one by one. For every mean, say ak, it takes the set Bak={i | x∗i−1nxΔi=ak} of indices of narrowed intervals beginning in ak and inserts it to the set L of free indices with respect ak (creftype 7). Indices {1,…,n}∖L are fixable with respect to ak. This yields 2|L| candidate extremal points that are examined by Algorithm 2, called on creftype 8.

Then, indices from the set Eak={i | x∗i+1nxΔi=ak} of narrowed intervals ending in ak are removed from L. Intervals with these indices will be fixed to the lower endpoint for every upcoming k′>k (creftype 9 of Algorithm 1). The update of V1 and V2 will be explained later.

Algorithm 2 consecutively traverses all 2|L| extremal points (vertices of x) resulting from fixing either xi=x––i or xi=¯¯¯xi for the free indices i∈L. For every such vertex, say x, the variance V(x) is computed. To make these computations cheap, the traversal of L is performed in a way that two successive extremal points x,x′ differ in just one component. Then Lemma 2 shows how to get V(x′) from V(x) in O(1) arithmetic operations. The variance is stored indirectly as variables V1 and V2; they can be easily updated when x––i is switched to ¯¯¯xi, or vice versa.

Algorithm 2 is an adaptation of the algorithm from [10, pg. 37] for enumeration of elements of the set {±1}ℓ for a given ℓ. The enumeration can in general start from an arbitrary element. The proof of correctness can be found therein. In our variant, the variable s∈{±1}|L| indicates the current extremal point. In every iteration of while cycle, some si is set to −si. The ith index Li is taken from L (here we consider L as a list rather than a set) and xLi is switched to the other endpoint. For this new extremal point, V1 and V2 are updated (creftype 8) and the resulting variance V is compared to the best value found so far (creftype 9).

The following property of Algorithm 2 is crucial for the correctness and complexity of FGKLA algorithm: When Algorithm 2 ends, then s=(1,…,1). The next proposition immediately follows.

In particular, this means that when entering creftype 8 of Algorithm 1, we always start examining the free indices with xi∈¯¯¯xi for each i∈L.

Finally, creftype 9 of Algorithm 1 removes intervals ending in ak from L. These intervals are going to be fixed to their lower endpoints in the following iterations. Since they are at the upper endpoint now, creftype 9 updates V1 and V2 accordingly.

Aside of the implementation details (which are however important for the reduced time complexity bound), our formulation of the algorithm differs from the original paper [4] also for another reason. The original formulation can lead to complexity O(n2⋅4ω), for example if ω=ℓ and if there are ℓ narrowed intervals ending in some ak and further ℓ narrowed intervals starting in ak+1. However, a minor modification of the original formulation would be sufficient to achieve the time O(n2⋅2ω). □

This section is devoted to the main result: on average, FGKLA algorithm works in “almost linear time” and the cases when it computes in exponential time occur extremely rarely.

Here we use the statistical motivation of the problem as described in Section 1.3. Namely, in statistics, data are often assumed to form a random sample from a certain distribution. This is exactly our probabilistic model: we assume that both centers of the intervals and their radii form two independent random samples from fairly general classes of distributions.

The size ω of the largest clique of the FGKLA intersection graph with data [x––i\coloneqqx∗i−xΔi, ¯¯¯xi\coloneqqx∗i+xΔi]i=1,…,n has the following properties:

Proof of Theorem 2 will be given in Section 3.1.

The average computing time is

The assumption on the distribution of radii is very mild; indeed, we need just something a little more than existence of the expectation (we even do not need finite variance). On the other hand, Lipschitz continuity of Φ∗ (Item 1) is unavoidable; we will show what can happen without Lipschitz continuity in Section 4. We will also discuss there what happens when we relax the independence assumption (Item 3) and what is the cost for dependence paid by existence of higher-order moments. □

In Eq. 7 we have imposed a technical condition α≥1. This is not restrictive since the interesting cases are those with α≫1. Indeed, the difficult case is when ε is close to zero (“radii can be large with a high probability”), γ≫0 (“radii are large on average”) and L≫0 (“the density of centers can have high peaks”, or “many centers can be close to one another”).

We have also introduced a technical condition ε≤1 in Item 2. Again, this is not at all restrictive — for example, if a distribution of reader’s interest has finite high-order moments, it must also have a finite moment of low order 1+ε. □

Let i≠j and let pn be the probability that {i,j} is an edge of the FGKLA intersection graph. That is,

Observe that pn does not depend on i,j by the i.i.d. assumptions.

Given a random variable X

, its probability density function (“p.d.f.”) is denoted by

Observe that the p.d.f. of x∗i exists because the c.d.f. is Lipschitz continuous (and thus absolutely continuous). Recall that L is the corresponding Lipschitz constant. The Lipschitz condition also implies φx∗i(z)≤L for all z. By symmetry, φ−x∗j(z)=φx∗i(−z). Using independence of x∗i,x∗j, the symmetry of φx∗i−x∗j(z) around zero and the Convolution Theorem we get

Recall that the number α has been introduced in Eq. 7.

By Markov’s inequality we get

Using the Law of Total Probability and independence of

An and B we get

Obviously, Wij=1 almost surely (“a.s.”) if i=j. If i≠j, then Wij is alternatively distributed with parameter pn. Moreover, the variables

are independent (this is an important point). Putting

Now we can use an estimate based on (a kind of) Penrose’s method, see

[9], Chapter 6. The crucial observation is

Indeed, if the FGKLA graph has a clique of size κ+1 containing vertex i, then at least κ indicators from Eq. 9 are one.

Continuing with estimate Eq. 11 with κ\coloneqqkn, we get

Property Eq. 10 and Lemma 4 imply the correctness of Eq. 16 if n is sufficiently large. In Eq. 15 we used the fact that E1,…,En are identically distributed (but not independent) and the Bonferroni inequality Pr[Q1∨⋯∨Qn]≤∑ni=1Pr[Qi] for any events Q1,…,Qn. It remains to prove Eq. 17.

We use the tail probability bound from Lemma 5 for Bi(n−1,αn). Observe that if n≥3, then kn≥α and the assumption of Lemma 5 is satisfied.