Durand de Gevigney and Szigeti <cit.> have recently given a min-max theorem for the (2,k)-connectivity augmentation problem. This article provides an O(n^3(m+ n logn)) algorithm to find an optimal solution for this problem. 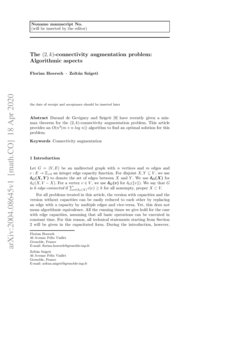 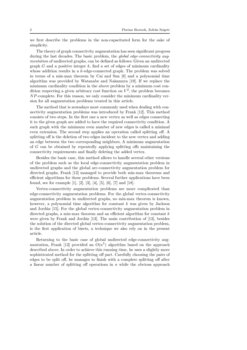 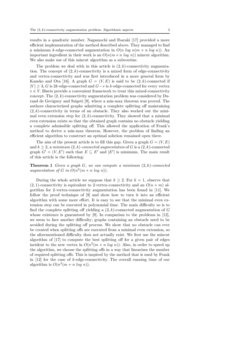 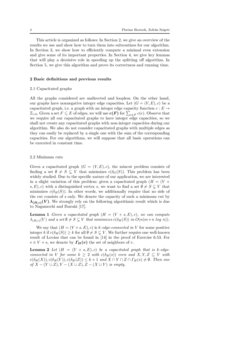 Let G=(V,E) be an undirected graph with n vertices and m edges and c:E→Z>0 an integer edge capacity function. For disjoint X,Y⊆V, we use δG(X,Y) to denote the set of edges between X and Y. We use δG(X) for δG(X,V−X). For a vertex v∈V, we use δG(v) for δG({v}). We say that G is k-edge-connected if ∑e∈δG(X)c(e)≥k for all nonempty, proper X⊂V.

For all problems treated in this article, the version with capacities and the version without capacities can be easily reduced to each other by replacing an edge with a capacity by multiple edges and vice-versa. Yet, this does not mean algorithmic equivalence. All the running times we give hold for the case with edge capacities, assuming that all basic operations can be executed in constant time. For this reason, all technical statements starting from Section 2 will be given in the capacitated form. During the introduction, however, we first describe the problems in the non-capacitated form for the sake of simplicity.

The theory of graph connectivity augmentation has seen significant progress during the last decades. The basic problem, the global edge-connectivity augmentation of undirected graphs, can be defined as follows: Given an undirected graph G and a positive integer k, find a set of edges of minimum cardinality whose addition results in a k-edge-connected graph. The problem was solved in terms of a min-max theorem by Cai and Sun CS and a polynomial time algorithm was provided by Watanabe and Nakamura WN . If we replace the minimum cardinality condition in the above problem by a minimum cost condition respecting a given arbitrary cost function on V2, the problem becomes NP-complete. For this reason, we only consider the minimum cardinality version for all augmentation problems treated in this article.

The method that is nowadays most commonly used when dealing with connectivity augmentation problems was introduced by Frank F . This method consists of two steps. In the first one a new vertex as well as edges connecting it to the given graph are added to have the required connectivity condition. A such graph with the minimum even number of new edges is called a minimal even extension. The second step applies an operation called splitting off. A splitting off is the deletion of two edges incident to the new vertex and adding an edge between the two corresponding neighbors. A minimum augmentation of G can be obtained by repeatedly applying splitting offs maintaining the connectivity requirements and finally deleting the added vertex.

Besides the basic case, this method allows to handle several other versions of the problem such as the local edge-connectivity augmentation problem in undirected graphs and the global arc-connectivity augmentation problem for directed graphs. Frank F managed to provide both min-max theorems and efficient algorithms for these problems. Several further applications have been found, see for example BAB , BGJS , BJa , BJo , BF , BGS1 , BGS2 and S .

Returning to the basic case of global undirected edge-connectivity augmentation, Frank F provided an O(n5) algorithm based on the approach described above. In order to achieve this running time, he uses a slightly more sophisticated method for the splitting off part. Carefully choosing the pairs of edges to be split off, he manages to finish with a complete splitting off after a linear number of splitting off operations in n while the obvious approach results in a quadratic number. Nagamochi and Ibaraki NI provided a more efficient implementation of the method described above. They managed to find a minimum k-edge-connected augmentation in O(n log n(m+n log n)). An important ingredient in their work is an O(n(m+n log n)) mincut algorithm. We also make use of this mincut algorithm as a subroutine.

The aim of the present article is to fill this gap. Given a graph G=(V,E) and k≥2, a minimum (2,k)-connected augmentation of G is a (2,k)-connected graph G′=(V,E′) such that E⊆E′ and |E′| is minimum. The main result of this article is the following:

During the whole article we suppose that k≥2. For k=1, observe that (2,1)-connectivity is equivalent to 2-vertex-connectivity and an O(n+m) algorithm for 2-vertex-connectivity augmentation has been found in ET . We follow the proof technique of DgGSz and show how to turn it into an efficient algorithm with some more effort. It is easy to see that the minimal even extension step can be executed in polynomial time. The main difficulty so is to find the complete splitting off yielding a (2,k)-connected augmentation of G whose existence is guaranteed by DgGSz . In comparism to the problems in F , we seem to face another difficulty; graphs containing an obstacle need to be avoided during the splitting off process. We show that no obstacle can ever be created when splitting offs are executed from a minimal even extension, so the aforementioned difficulty does not actually exist. We first use the mincut algorithm of NI to compute the best splitting off for a given pair of edges incident to the new vertex in O(n2(m+n log n)). Also, in order to speed up the algorithm, we choose the splitting offs in a way that linearizes the number of required splitting offs. This is inspired by the method that is used by Frank in F for the case of k-edge-connectivity. The overall running time of our algorithm is O(n3(m+n log n)).

Given a capacitated graph (G=(V,E),c), the mincut problem consists of finding a set ∅≠S⊊V that minimizes c(δG(S)). This problem has been widely studied. Due to the specific nature of our application, we are interested in a slight variation of this problem: given a capacitated graph (H=(V+s,E),c) with a distinguished vertex s, we want to find a set ∅≠S⊊V that minimizes c(δH(S)). In other words, we additionally require that no side of the cut consists of s only. We denote the capacity of such a minimum cut by λ(H,c)(V). We strongly rely on the following algorithmic result which is due to Nagamochi and Ibaraki NI .

We say that (H=(V+s,E),c) is k-edge-connected in V for some positive integer k if c(δH(S))≥k for all ∅≠S⊊V. We further require one well-known result of Lovász that can be found in FB in the proof of Exercise 6.53. For v∈V+s, we denote by ΓH(v) the set of neighbors of v.

Given a capacitated graph (G=(V,E),c) and a positive integer k, we define a function \boldmathf on the bisets on V by f(X)=k|w(X)|+c(δG(XI,V−XO)). Observe that f(X)=f(¯¯¯¯X). This function will play a crucial role throughout the article.

We give a basic property of f that is a direct consequence of (5) in DgGSz :

For a capacitated graph (G=(V,E),c), any two bisets X and Y on V satisfy the equation:

Next, we collect several consequences of Proposition 1 which prove useful throughout the article.

We next give an important characterization of admissible pairs. Given a pair (su,sv), a non-trivial biset X with either f(X)≤2k+1 and u,v∈XI or f(X)=2k,u,v∈XO and {u,v}∩XI≠∅ is said to block (su,sv). The following result can be found as Lemma 3.1 in DgGSz and will be frequently used.

A biset that blocks a pair of edges (su,sv) with u≠v is called horrifying. Note that the wall of a horrifying biset contains at most one vertex.

While the following result is not explicitly proven in DgGSz , its proof is almost literally the same as the one of Lemma 3.4 in DgGSz . We therefore omit it. The result nevertheless plays a key role in our algorithm.

We also require the following result that can be found in DgGSz as Proposition 3.2.

Let (H=(V+s,E),c) be a capacitated graph that is (2,k)-connected in V and with c(δH(s)) even. An obstacle is a collection B of bisets in V and a vertex t satisfying the following:

We say that t is the special vertex of the obstacle. It is easy to see that a capacitated graph containing an obstacle does not have a complete admissible splitting off, as every splitting off of (st,su) for some u∈ΓH(s) is blocked by the biset B with u∈BI and by Lemma 5. In DgGSz , it is proved that the converse is also true:

In this section, we introduce minimal even extensions, the capacitated graphs obtained by applying the first step of our algorithm. We define them, show how to compute them and give some properties of them.

The crucial reason for considering minimal even extensions is the following direct relation to minimum augmentations that can be found in DgGSz .

The remainder of this section shows how to compute a minimal even extension efficiently and determines some of its basic properties. We first show the algorithm to compute it:

Given a capacitated graph, a minimal even extension can be computed in O(n3(m+n log n)).

We prove one more important result that shows that when finding a complete admissible splitting off from a minimal even extension, we do not need to worry about obstacles.