A function f:[n]^d→F_2 is a direct sum if it is of the form f((a_1,...,a_d)) = f_1(a_1)+... + f_d (a_d), for some d functions f_1,...,f_d:[n]→F_2. We present a 4-query test which distinguishes between direct sums and functions that are far from them. The test relies on the BLR linearity test and on the direct product test constructed by Dinur and Steurer. We also present a different test, which queries the function (d+1) times, but is easier to analyze. In multiplicative ± 1 notation, the above reads as follows. A d-dimensional tensor with ± 1 entries is called a tensor product if it is a tensor product of d vectors with ± 1 entries. In other words, it is a tensor product if it is of rank 1. The presented tests check whether a given tensor is close to a tensor product. 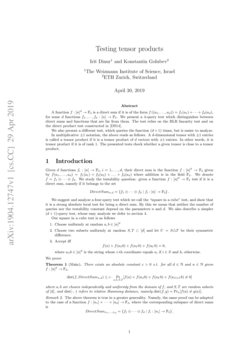 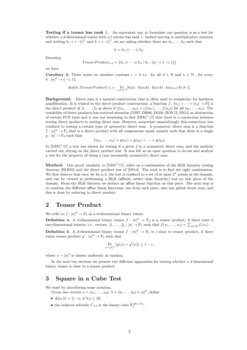 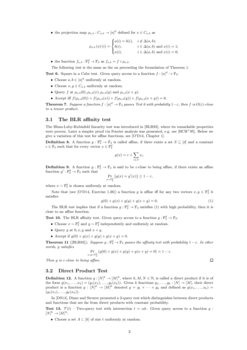 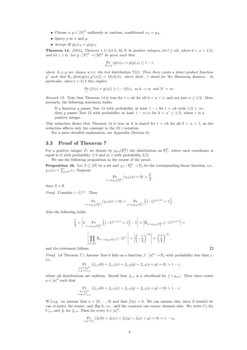 We suggest and analyze a four-query test which we call the “square in a cube” test, and show that it is a strong absolute local test for being a direct sum. By this we mean that neither the number of queries nor the testability constant depend on the parameters n and d. We also describe a simpler (d+1)-query test, whose easy analysis we defer to section 4.

Our square in a cube test is as follows

where a,b are chosen independently and uniformly from the domain of f, and S,T are random subsets of [d], and dist(⋅,⋅) refers to relative Hamming distance, namely dist(f,g)=Pra[f(a)≠g(a)].

The above theorem is true in a greater generality. Namely, the same proof can be adapted to the case of a function f:[n1]×⋯×[nd]→F2, where the corresponding subspace of direct sums is

Testing if a tensor has rank 1.

An equivalent way to formulate our question is as a test for whether a d-dimensional tensor with ±1 entries has rank 1. Indeed moving to multiplicative notation and writing hi=(−1)fi and h=(−1)f, we are asking whether there are h1,…,hd such that

Direct sum is a natural construction that is often used in complexity for hardness amplification. It is related to the direct product construction: a function f:[n1]×⋯×[nd]→Fd2 is the direct product of f1,…,fd as above if f(a1,…,ad)=(f(a1),…,f(ad)) for all (a1,…,ad). The testability of direct products has received attention [GS97, DR06, DG08, IKW12, DS14] as abstraction of certain PCP tests and it was not surprising to find [DDG+17] that there is a connection between testing direct products to testing direct sum. However, somewhat unsatisfyingly this connection was confined to testing a certain type of symmetric direct sum. A symmetric direct sum is a function f:[n]d→F2 that is a direct product with all components equal; namely such that there is a single g:[n]→F2 such that

In [DDG+17] a test was shown for testing if a given f is a symmetric direct sum, and the analysis carried out relying on the direct product test. It was left as an open question to devise and analyze a test for the property of being a (not necessarily symmetric) direct sum.

Our proof, similarly to [DDG+17], relies on a combination of the BLR linearity testing theorem [BLR93] and the direct product test of [DS14]. The trick is to find the right combination. We first observe that once we fix a,b, the test is confined to a set of at most 2d points in the domain, and can be viewed as performing a BLR (affinity rather than linearity) test on this piece of the domain. From the BLR theorem we deduce an affine linear function on this piece. The next step is to combine the different affine linear functions, one from each piece, into one global direct sum, and this is done by reducing to direct product.

We refer to f:[n]d→F2 as a d-dimensional binary tensor.

where x∼[n]d is chosen uniformly at random.

In the next two sections we present two different approaches for testing whether a d-dimensional binary tensor is close to a tensor product.

3 Square in a Cube Test

We start by introducing some notation.

The following test is the same as the on preceeding the formulation of Theorem 1.

Square in a Cube test. Given query access to a function f:[n]d→F2:

Suppose a function f:[n]d→F2 passes Test 6 with probabilty 1−ε, then f is O(ε)-close to a tensor product.

The Blum-Luby-Rubinfeld linearity test was introduced in [BLR93], where its remarkable properties were proven. Later a simpler proof via Fourier analysis was presented, e.g. see [BCH+95]. Below we give a variation of this test for affine functions, see [O’D14, Chapter 1].

A function g:Fd2→F2 is called affine, if there exists a set S⊆[d] and a constant c∈F2 such that for every vector x∈Fd2

A function g:Fd2→F2 is said to be ε-close to being affine, if there exists an affine function g′:Fd2→F2 such that

where x∼Fd2 is chosen uniformly at random.

The BLR test implies that if a function g:Fd2→F2 satisfies (1

) with high probability, then it is close to an affine function.

The BLR affinity test. Given query access to a function g:Fd2→F2:

Then g is ε-close to being affine. ∎

In [DS14], Dinur and Steurer presented a 2-query test which distinguishes between direct products and functions that are far from direct products with constant probability.

where A,x,y are chosen w.r.t. the test distribution T(t). Then there exists a direct product function g′ such that Ex[dist(g(x),g′(x))]=O(εk/t), where dist(⋅,⋅) stand for the Hamming distance. In particular, when t=k/2 this implies

Note that Theorem 14 is true for t=αk for all 0<α<1, and not just α≤1/2. More precisely, the following statement holds:

This reduction shows that Theorem 14 is true as it is stated for t=αk for all 0<α<1, as the reduction affects only the constant in the O(⋅) notation.

We use the following proposition in the course of the proof.

Let S⊆[D] be a set and χS:FD2→F2 be the corresponding linear function, i.e., χS(x)=∑i∈Sxi. Suppose

and the statement follows. ∎

where all distributions are uniform. Recall that fa,b is a shorthand for f∘ρa,b. Then there exists a∈[n]d such that

The BLR theorem (Theorem 11) implies that there exists a subset S(b)⊆Δ(a,b), such that

By the BLR theorem, there should be the “greater or equal to” sign instead of the equality. We assume equality to ease of the proof.

We now show that F passes Test 13 with high probability and hence is close to a direct product.

Note that the distribution on pairs (b,b′), where b is chosen uniformly from [n]d and b′ w.r.t. D(b), is equaivalent to the following: for each i∈[d],

In particular, it is symmetric in the sense that choosing b′∼[n]d uniformly at random first, and then b∼D(b′), leads to the same distribution on pairs (b,b′) as the one described above.

Note that the distribution Db,b′ is supported on a binary cube of dimension d−|Δ(b,b′)| inside [n]d. Denote

We claim that the following holds

To see (3) note that since b is chosen uniformly, b′ is chosen w.r.t. D(b), and x∼Db,b′, the resulting distribution for x is

which is exactly the uniform distribution on

We now show that

First note that it follows from the definitions that

And by the symmetry of the distribution on pairs (b,b′),

Combined together, the previous two equations imply that

and by the Markov inequality, Inequality 4 follows. By the definition of εb,b′,

In [KL14] Kaufman and Lubotzky showed that F2-coboundary expansion of a 2-dimensional complete simplicial complex implies testability of whether a symmetric F2-matrix is a tensor square of a vector. The following test is inspired by their work and in a way generalizes it.

Given two vectors a,b∈[n]d, for i∈[d] denote by aib∈[n]d the vector which coincides with a in every coordinate except for the i-th one, where it coincides with b, i.e.,

The Shapka Test. Given query access to a function f:[n]d→F2:

Shapka is the Russian word for a winter hat (derived from Old French chape for a cap). The name the Shapka test comes from the fact that the set Qa,b consists of the two top layers of the induced binary cube Ca,b (and also the bottom layer if d is even).

Suppose a function f:[n]d→F2 passes Test 17 with probabilty 1−ε, then f is ε-close to a tensor product.

Denote by δ the normalized distance from f to the subspace of tensor products, i.e., there exists a tensor product g:[n]d→F2 such that

For i=d, the defintion of fda:[n]→F2 depends on the parity of d and reads as follows. For x∈[n]d,

In these notations, the following holds for any a,b∈[n]d,

Combining this equality with (5) and (6), we get the following

In [DS14], Dinur and Steurer proved Theorem 14 for 0<α<1/2. The following reduction shows that the theorem is true for all 0<α<1 by a reduction from 1/2<α<1 to some 0<α′<1/2. Recall that Test 13 makes two queries according to the distribution T(t), which is the following distribution: (1) Choose a set A⊂[k] of size t uniformly at random. (2) Choose x,y∈[N]k uniformly at random, conditioned xA=yA.

The case of α′=1/2 has to be treated separately as it is not covered by Theorem 14. In this case there is a reduction to α′′=1/2−1/k as follows. Given two vectors x0,x2 distributed w.r.t. T(k/2−1) construct an intermidiate random vector x1 which agrees on exactly half of the coordinates with both x0 and x2. ∎

where A,x,y are chosen w.r.t. the test distribution T(t). Then there exists a direct product function g′ such that Ex[dist(g(x),g′(x))]=O(εk/t), where dist(⋅,⋅) stand for the Hamming distance. In particular, cwhen t=k/2 this implies